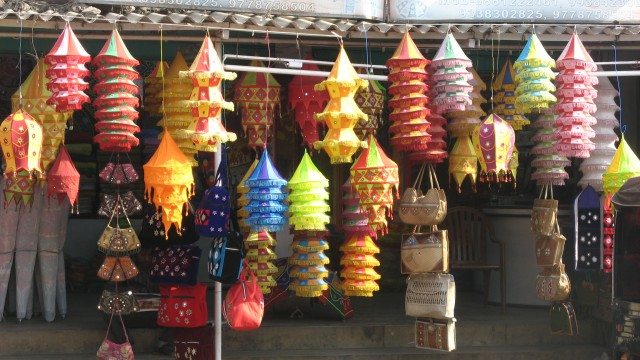 Last time we went to Mandu with Nikki Mama and Choti Naani. It was fun travelling with them and exploring various places of Mandu. So when we planned this trip to Odisha with them, I was excited that it would be an enjoyable trip.

We planned to travel by Rajdhani Express train from New Delhi to Bhubaneswar.

It was scheduled to arrive at New Delhi Railway Station by 5:00 pm and reach Bhubaneswar by the next day around 3:00 pm. When we arrived at the New Delhi Railway Station there was an announcement that the Rajdhani Express was delayed by three hours. It was winter and there were foggy nights and mornings that’s why many trains were delayed and many were even cancelled. We were lucky that our train was delayed only by three hours.

At last Rajdhani came at 8:00 pm and we all boarded the train. I was not happy about one thing that our and Nani’s coaches were different. I was tired, so as soon as I hit the bed, I slept. I woke up early to find every one awake except me. Mama and Nani were also in our coach, we were served breakfast and I enjoyed it.

I like travelling in Rajdhani trains because they are superfast, neat & clean and food is served nearly all the time. They mostly run on long distances. I like relaxing, watching mountains, trains, rivers passing by and making an excuse to play on mobile.

I thought that the Rajdhani was going through Madhya Pradesh. Papa told me that it was passing through Bihar and I was so excited when mummy told me that the train also covers the Eastern Ghats to reach Bhubaneswar.

I started looking outside at vast farmlands. It was a usual sight that I saw on my earlier train trips as well so it was a bit boring. Papa took me to the doors of the train to get some fresh air, suddenly a Rajdhani going to Delhi sped by, I was thrilled. We came back to our seat and played UNO in which I am a master since I first played it in Nervi, Italy when I was only four years old. After having lunch a station came from where Netaji Subhas Chandra Bose fled disguised as a Pathan on his historic escape on 18.11.1941.The station’s name was Gomoh.

Our train then passed through the Eastern Ghats and three huge tunnels came. I and Nikki Mama shouted Woohoo whenever we were passing through the tunnels.

Tanmay, mummy and I played Bob the Builder and we all enjoyed it. Around 8:00 pm we were approaching Cuttak. First the train crossed five rivers and then came the largest of all Mahanadi! Mahanadi Bridge is about two kilometer long. We reached Bhubaneswar around 9:00 pm.

After a long train journey the room in the Ginger Hotel was comforting. The bathroom was also first class.

The next morning I stole some time to watch Television while everyone was getting ready. We went to an A/C restaurant which was in the city, to eat breakfast. We ordered food and waited eagerly. My dosa was like a pyramid and it was really a tasty pyramid. 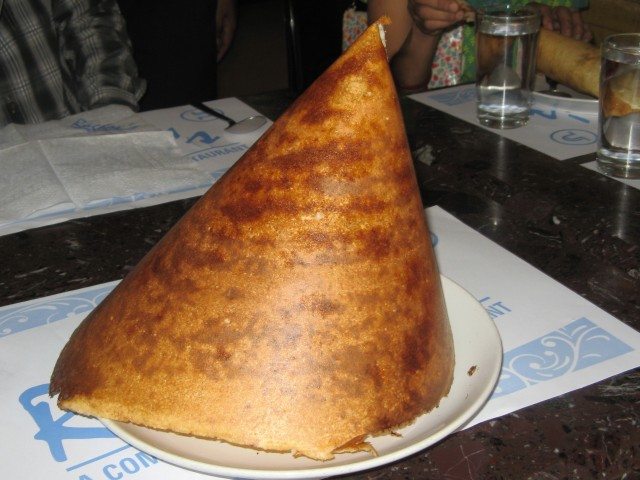 Upma was served as we fill mud in mugs or toy buckets and turn it upside – down. Rasmalai was superb. We should not forget that Odisha is famous for its sweets.

My tummy was filled. The food was tastier than all the tasty junk food I enjoy so much (that I get so less because of my strict mummy) and it did not cost much as well.

Before starting our journey to Dhauli mummy bought some snacks for us. Dhauli is linked with Ashoka and Kalinga War, in which thousands died, fighting. At Dhauli there were crowds of people and many tourists’ buses came from Bhubaneswar. There was a huge white color Stupa towering above us. This Vishwa Shanti Stupa was built in 1970 by Japanese Buddhist Organizations. 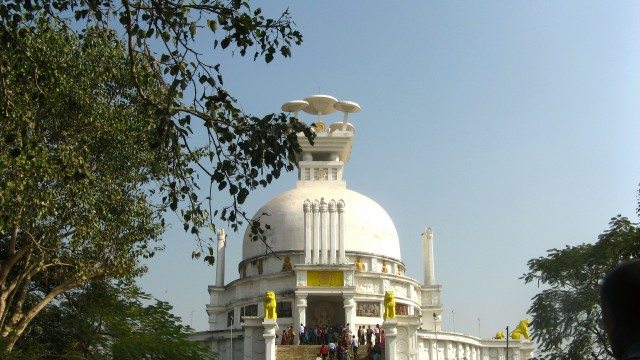 From the Stupa we could get an extravagant view of the surroundings. We could even see Daya River that turned red during Kalinga War. 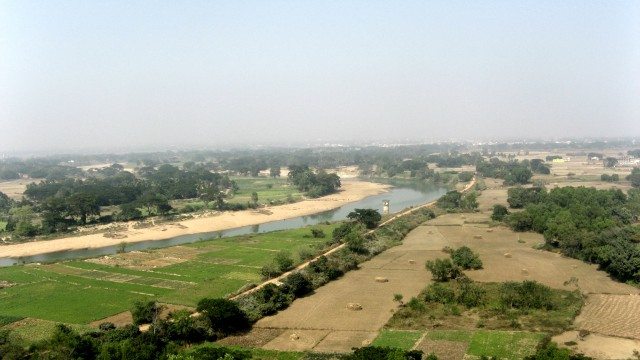 Daya River as seen from the Stupa

When Ashoka saw so many dead people he turned to Buddhism and declared that he would not fight another war. From the Stupa we went to see Ashoka’s rock inscriptions which were in a garden. 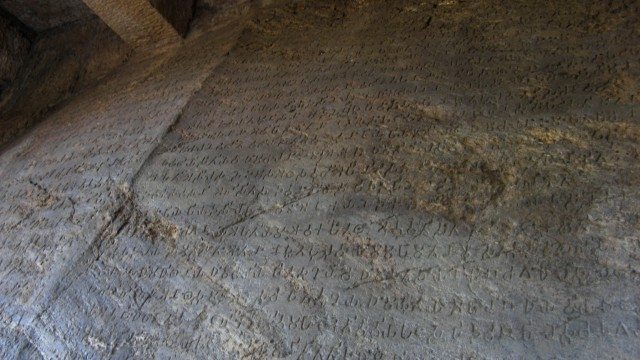 Thereafter we resumed our journey to Pipli. We passed through vast stretches of fields. We stopped at Pipli which is a village halfway between Bhubaneswar and Puri. This village is famous for its appliqué work. Artists from Pipli stitch chariot covers of the famous Jagannatha Rath Yatra. The Pipli market was on both sides of the long road. There were, hanging lamp sheds, decorative umbrellas, table covers, and bed sheets in almost every shop. 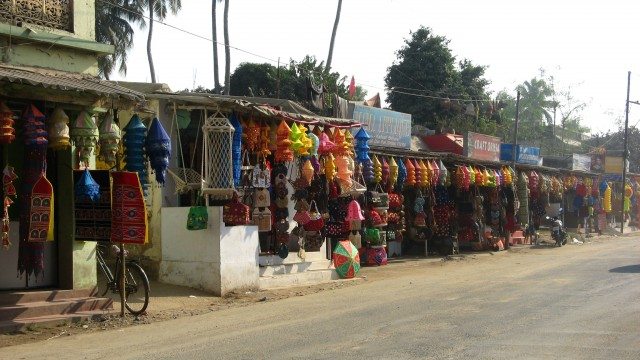 After roaming there for a while, we continued our journey towards Konark.

The road from Pipli to Konark was smooth and beautiful. It was flanked on both sides by large trees. 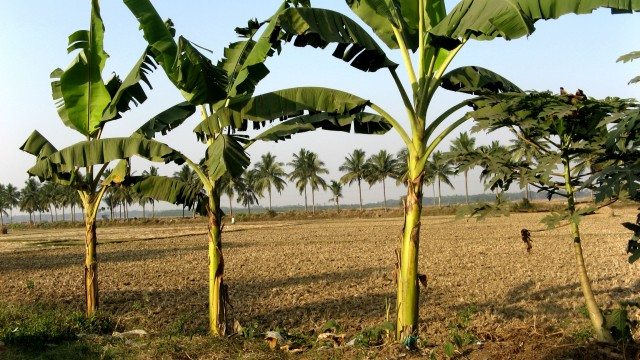 Golden Farms along the road to Konark

We passed through an old toll booth. Papa held a competition that who will spot the Konark Temple first? We all eagerly started to look outside. Papa was looking straight with confidence that only he will win. I thought that probably he knew where the Sun Temple would come. I was proved right as after sometime papa was the first person to spot the Sun Temple’s mastaka. It was brightly shining, rising above the tree canopy.

By then it was evening so we decided to go to the Konark beach first and get a glance of the temple in the night. It was a nice warm day and towards the evening it turned a little cool. I wore my swimming costume and had fun on the beach. Nikki Mama and I played with a disk.

When Mama went to play with his friends who had also come from Delhi, I strolled on the beach going near to the ocean so that I could get my feet wet. The water was chillingly cold. I wanted to go further deep but papa had cautioned me not to do so as Konark Beaches are unsafe and dangerous. It was a beautiful evening with finally the sun diving and disappearing in the ocean.

After spending nearly an hour and half at the beach we went to the Sun Temple. It was at a walking distance from the beach. I would take you to the Konark Sun Temple in my next article.

My trip to Odisha – Dhauli, Pipli and Konark was last modified: January 28th, 2021 by Rachit

As a travel blogger and in some sense an amaetuer writer on internet, I have often wondered on how we can formalise the authorship process. Anyone can have a blog with any name. How do we authorise a certain piece by a certain person. In the old world, one can get a unique ISBN number for a book. Each book clearly mentions the details of the authors, there is a publisher to connect to and so on. Eveneven if you copy-paste Premchand’s work and put it up as your own and publish your own book, it is hard to get enough readership to sustain such an effort. Publishers of repute would ensure that it is your original work and your ‘Authorship’ gets formalised. This institutionalisation is something which I have seen missing on internet. And it is a paradox, a big paradox. It is a paradox because unlike printed work, everything is far more easily accessible and more importably, auditable. So a work of plagiarism is easy to catch. The great thing about internet is that it has made writing and publishing accessible to almost anyone, which is brilliant and needs celebration. If you work is good, it would travel. Now from the same premise, it should have been simple to institute a process around ‘Authorship’.

I have a feeling that people who are more connected to the world of writing, unlike me and some of my fellow writers at Ghumakkar, probably have some kind of ‘Author Authentication Directory’ or some such thing. There are many ways through which one can establish one’s identity on internet. An identity once created in the form of a profile, can then be blessed by the relevant community, in a way authentication it. Almost akin to the attestation process by a Gazetted officer serving for Government. If there are enough authentications, then that profile gets approved and sort of certified. Any work coming out of that profile, say a poem or a travel log, can then be attributed to that profile or that person. If you are using a pen name like mythical Silent Soul then your journey is a little longer where as if you are some one like dear Mukesh (with h) Bhalse with enough of personal photos of self and family then you get certified much faster. Phew, problem solved, at least on paper. Places like Ghumakkar should contribute towards this process and may be act as platforms, like signing authorities.