My love for writing was paused by my travel to India. When with folks, I just wouldn’t want to do anything else :) However, as soon as I got back to Germany, I am back now with my fondest hobby – blogging :)

My travel to Switzerland was in the month of April 2011 and I thought writing about it now would be difficult. But the beauty of the place is etched so deeply on my heart and mind that the itinerary seemed so fresh and I could jot down everything – without missing much :) Here it goes..

Inter-laken – meaning between lakes.. Interlaken is situated between lake Thun & Breinz – two of the most beautiful lakes I have ever seen! I really fall short of words to explain how romantic it is..

Our hotel was perfectly located – close to the shopping area and right opposite to the Interlaken west station. So we had no problem in reaching the station on time.
Though we were almost sure about how to reach JungFrauJoch , we did quickly confirm about it from the Tourismus (the information centre). We also bought tickets here to go to JungFrauJoch since it is not covered under the Swiss tickets. We could either travel to Grindelwald and take a connection to from there, or to Lauterbraunen. We chose Lauterbraunen now and thought we could return in the Grindelwald direction.
JungFrauJoch – the top of Europe is actually the topmost railway station in Europe and not actually the topmost point of Europe. Whatever be it, the journey is definitely an experience worth remembering for a life time! 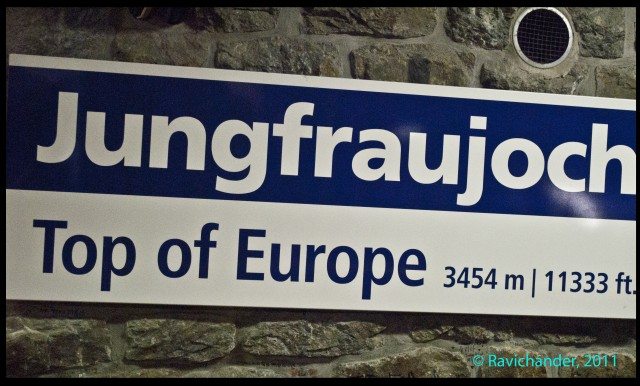 A tunnel through the mountain for a distance of about 9km or so – brilliant!! Also, it does have few stops in between meant to show the different view points there. On reaching JungFrauJoch, we rushed to see the Ice Palace – a cave of ice with some sculptures here and there – also made of ice!! 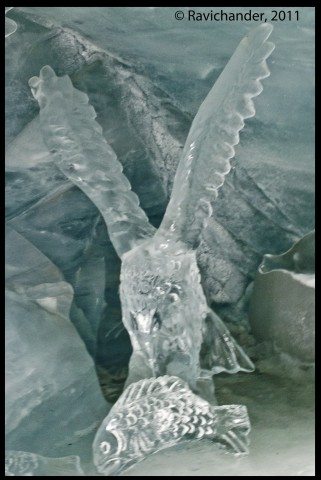 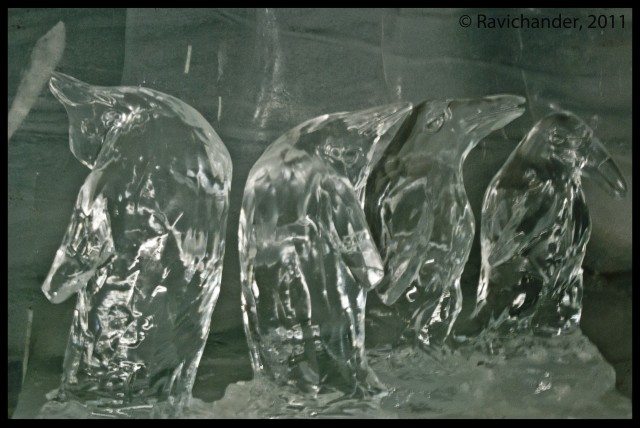 Next was the view point – where we went upto a reasonable distance – occassionally slipping and falling on the snow, and discovering some non-slippery pathway and helping more people by showing them the path we traversed :) This point was really marvellous – a view that took my breath away – literally!! A confluence of the clouds and the snowy mountains – no definite demarkation between the two- what a beauty it was! For a moment, I thought I was on the clouds – though indeed I was on cloud 9 :) 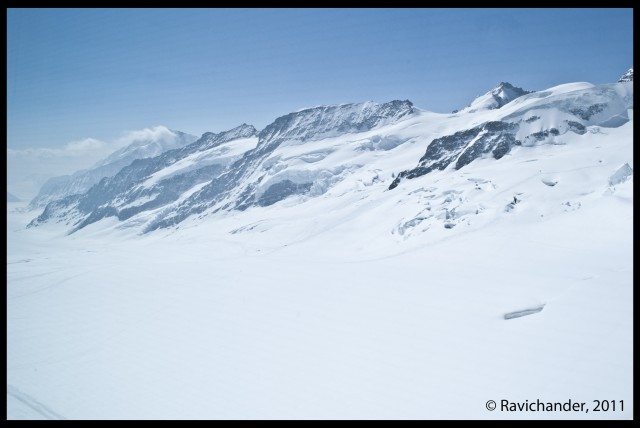 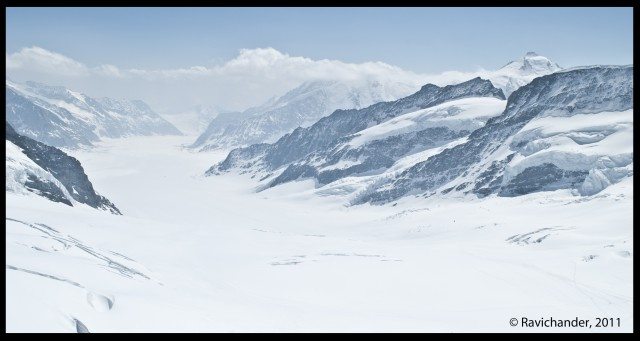 Reluctantly, we walked away from here towards the next best part of JungFrauJoch – the Sphinx. The Sphinx is rather an observatory – named so probably because it stands like the Sphinx of Egypt – here the dessert being that of snow and not sand.. We heard no sound while on the Sphinx – because the sound from the gushing ice cold wind overpowered any other sound.. We did manage to stand and pose for a couple of pics. We dint really know if we had to resist the chillness of the wind or our urge to take more pictures- such was the glamour of the place. After this, we walked down till the railway station and took the next train back to Interlaken.

Now, we went via Grindelwald – another beautiful village in the valley. As we arrived there, automatically a vacation mood set in by seeing the lethargic people who were sun-bathing and enjoying there cup of coffee.

We simply walked around the place muching our favourite snack – potato chips!
The evening turned out to be an interstingly lazy one with no much activity. However, our stroll alongside the lazy lanes did revive our senses.. We now took a train to Interlaken. We ended the night with a homely dinner at Little India restaurant. So far – too good :)

I left the factory thoroughly satisfied with the tour on my way back to the island I spotted an another factory. I greedily tried my luck to see if I can get another glimpse, following the signs that said visitor’s entrance which lead me to a huge factory with 3 furnace and 6 people working in it. Italian men with well built muscles sweat off as they tried to create a world class product; they smiled at me as I saw them mixing colours and shapes to create a lampshade, I watched them work to my heart’s content, and finally left the place. As I walked out I spotted some huge cartons stacked in the corridor, these were finished products ready to be shipped to the rest of the world.