My friend asked me if I wanted to have a short visit to some river islands. My answer was an immediate and emphatic yes.

We were in Abaetetuba, in north east of Brazil. On our way here, we had taken a ferry boat to cross the river, for going from Belem to Arapari. During that river crossing, I had been fascinated by the river islands and people living there. So, now I had a chance to go and visit some of those islands.

The only problem was the time, because by noon, we had to go back to Belem. “I will be ready early morning”, I had promised and suggested, “We need not stay there for long.”

However, Solange, who was supposed to accompany me on this trip, lived on another river island, one and half hour away so we had to wait for her and it was not possible to leave very early.

In the morning as we walked to the riverside, the sun was shining brightly but there was a nice cool breeze. On the way, I stopped to click a few pictures of Urubu vultures sitting on a rubbish dump and Solange giggled, saying “Dirty birds”. 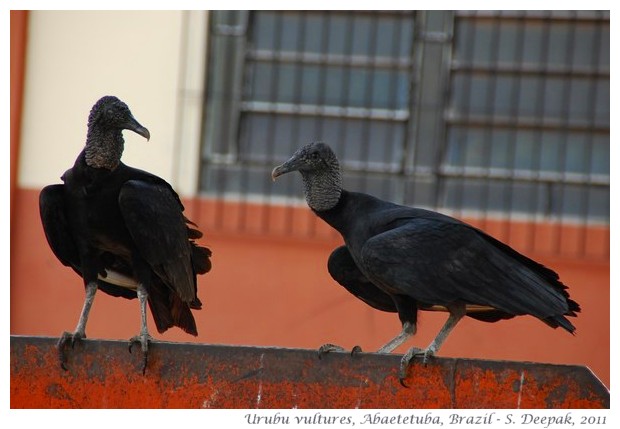 That is human nature, the humans, animals and birds that clean our rubbish dumps and our cities are looked down at with contempt. However, I explained to Solange that I found the Urubu fascinating because of the thick skin over their heads that made them look like ancient warriors ready for the battle field. Solange puckered her nose to express her disgust, clearly not convinced by explanation of their beauty.

I wondered which different races’ bloods were mixed up in her. Her skin was white but her hair had a shiny blue tinge and her eyes held a hint of Amerindian ancestors, a Caboclo.

Brazil had different Amerindian groups that were living here when the Europeans arrived after the “discovery” of Americas by Columbus. The Europeans brought here the African slaves. Over past two hundred years, other waves of European and Asian emigrants also came.

People of mixed races from all these different groups, had specific names like Caboclo, Mulatto, Mameluco, Cafuzo, Zambo, Mestizo, etc. After the end of the colonial period, classifying persons according to such groups is no longer done. Genetic studies have shown that most Brazilians have mixed genes. In some families, you can see some children with white skins, blue eyes and blond hair, and others who are of different shades of dark.

The original Amerindian groups have almost disappeared from most parts of the country and most obvious signs of their culture have also disappeared. However, if you look below the surface, in people’s language and food habits, bits and pieces of those cultures still survive. Like in the name of the town “Abaetetuba”, that is from an Amerindian language and means “the good hearted giant”.

I was thinking all this as we stood at the riverside near a river petrol pump where boats came for filling their tanks, waiting for our boat to arrive. When the boat arrived I was surprised and little shocked. I had been expecting a big boat, while this was a canoe with an outside motor, with water reaching its rim at the tail end. I couldn’t see any life jackets or rubber tubes to hold on to in case of a mishap. 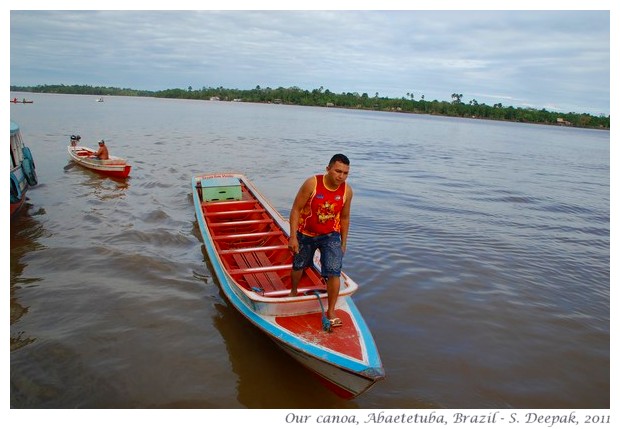 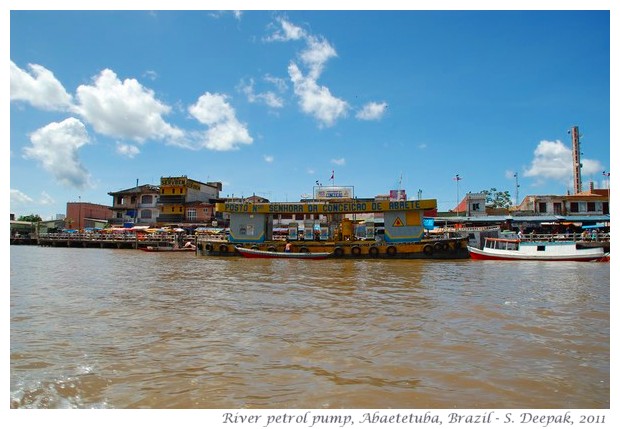 However, after insisting on that boat trip, I was not going to chicken out because of my fear. Actually, more than my own safety, I was worried about losing my camera.

The boat quickly threaded its way away from the city, moving towards more open spaces, where the other end of the river was a faint line kilometres away, and the land was covered with a thick cover of trees and creepers, almost like an impenetrable wall. 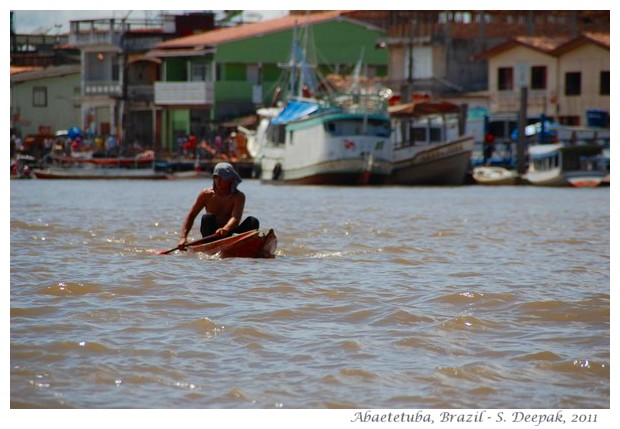 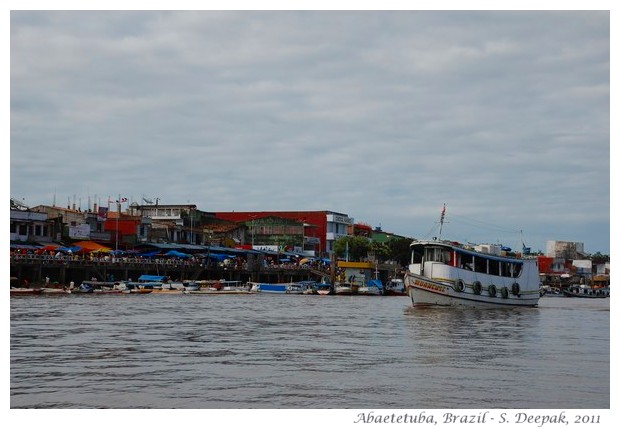 As big rivers such as Amazon, Tapajos, Tochantin, etc. reach the Atlantic ocean, for hundreds of kilometres, they create a network of large and small water channels in the delta, with thousands of river islands. Isolated communities or sometimes, small groups of persons live in these islands.

We passed different kinds of small and large boats. Sometimes children sitting in canoes or standing outside their homes on the riverbanks waved at us. There were men busy fishing or women washing clothes or taking bath. Most people wore small clothes, more like swimming costumes than proper clothes. Generally, people in Brazil seem very open to showing skin, both men and women. 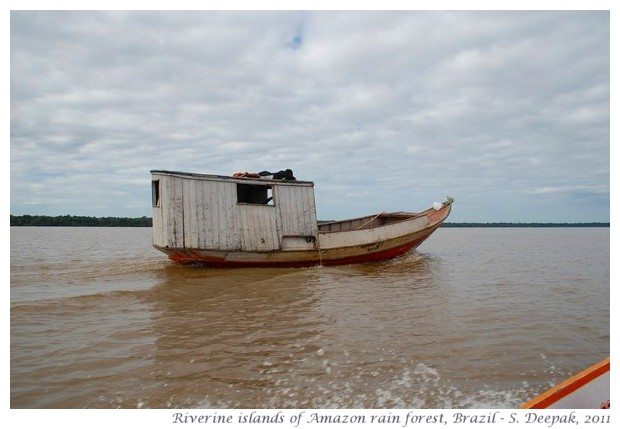 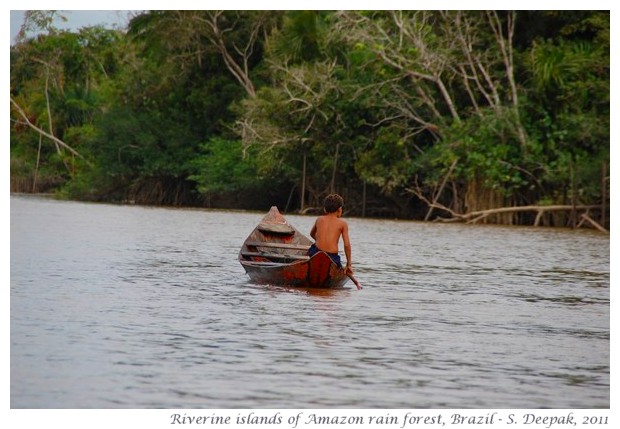 Small colourful birds swooped down suddenly gliding over the surface of the river looking for food, impossible to photograph. However, I was lucky a short while later, I saw two blue-black small birds, resting on a tree truck in the middle of the river. 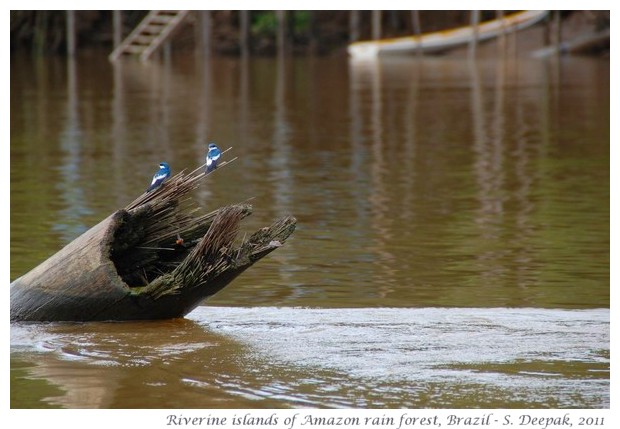 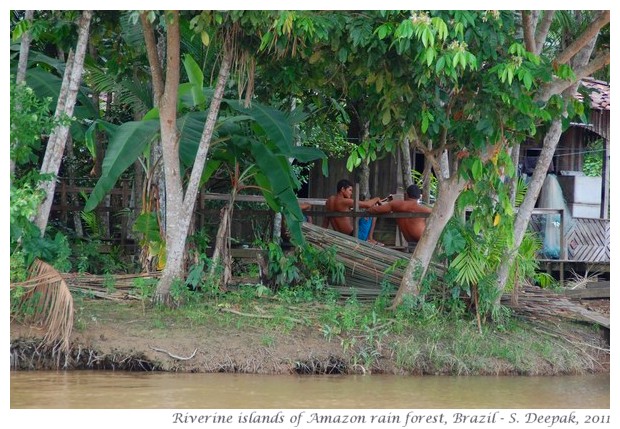 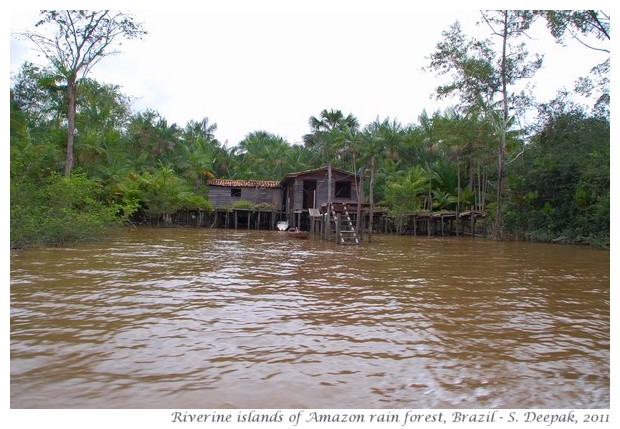 Solange told me the names of the different islands as we passed them, but I could not remember any of their names. As the canoe twisted and turned across the channels, I lost my sense of direction. After one and half hour of journey we reached the house of Engenho Pecheno on the Furo Grande Island.

There was a time, when these islands had many factories producing a local liquor called Cachaça (pronounced “cashasa”) from sugarcane juice. Engenho Pecheno’s father had also started a cachaça factory that was very well known. However, with globalization and progress, supermarkets came up on bigger islands and cheaper liquor started coming from south of Brazil. Thus slowly one by one these factories closed.

Engenho took us around his old factory that worked with steam. He is an old man living there with his wife, while his children live on the mainland. The factory was a desolate place with cobwebs everywhere. Someone had suggested that the factory can be shown as a heritage site to the tourists, to show how the sugarcane liquor was made in the old days. However it seems that local government is not convinced about this idea. 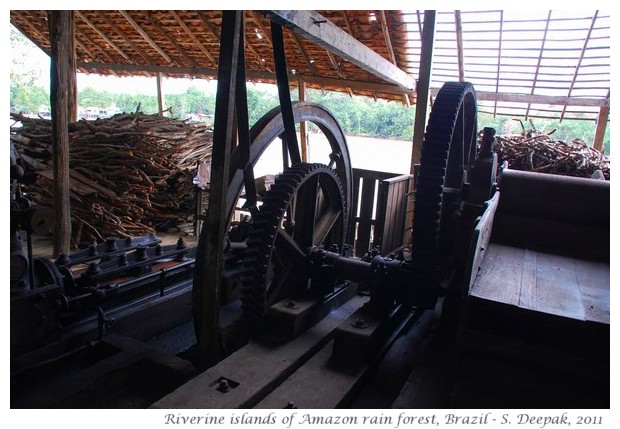 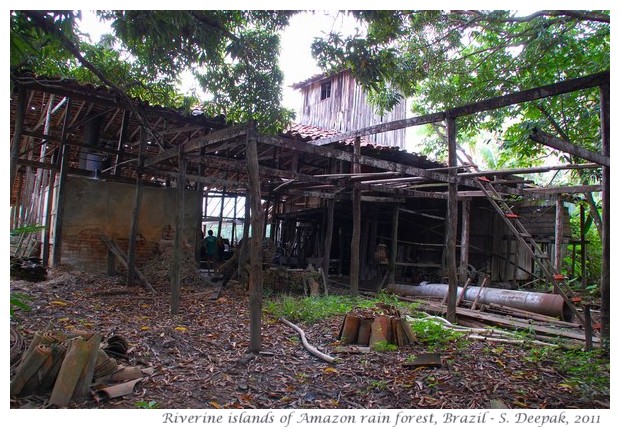 From Engenho’s place, across the river, there was a primary school where noisy children were playing. A few boats passed, people looking at us curiously. 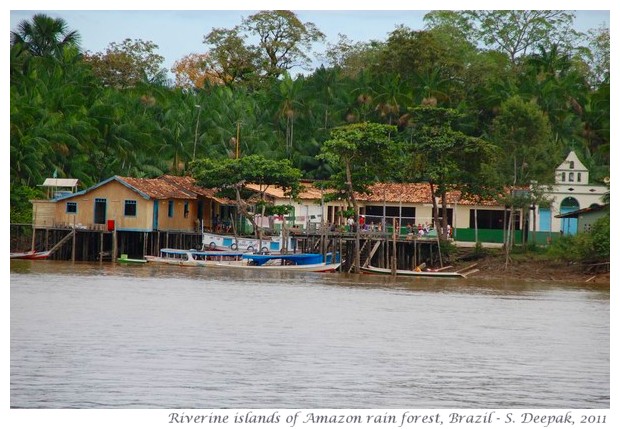 We said goodbye to Engenho and climbed down to our canoe. After another half an hour journey, our next stop was a kiln where they made terracotta roof tiles. There was no proper ladder to climb to the kiln from the river, but did not let that deter me from visiting it.

Guys working in the kiln stopped their work and came to show us around eagerly. They dig the mud from the river bed from an island situated a few kilometres away that has the right mud for the tiles. This is pressed into stamps and then left to dry in shelves. The dried tiles are put inside the fired oven for about 24 hours. 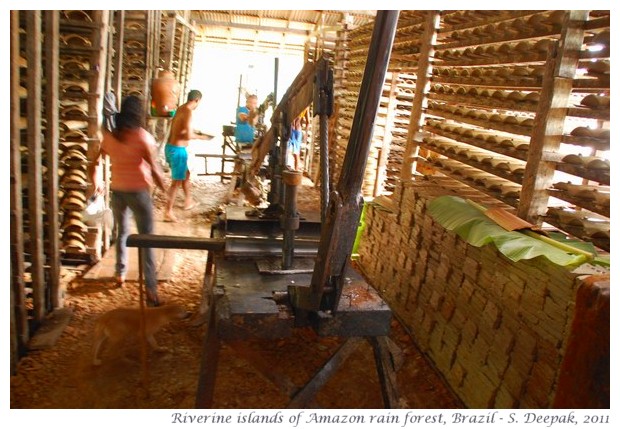 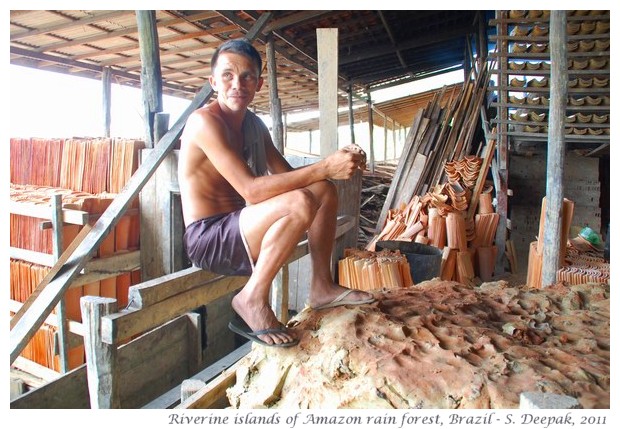 Aroldo, the owner of the kiln said that though there were Chinese plastic tiles in the market, most persons still preferred their traditional terracotta tiles. So their business is doing well.

Solange asked me if I wanted to go and visit a family of friends that lived nearby but I was getting worried about being late for the journey back to Belem, so I asked them to go back to Abaetetuba.

As we started back, the sun was now hot above us. Many persons traveling in canoes like ours had their umbrellas out. I pulled down my cap over my head. 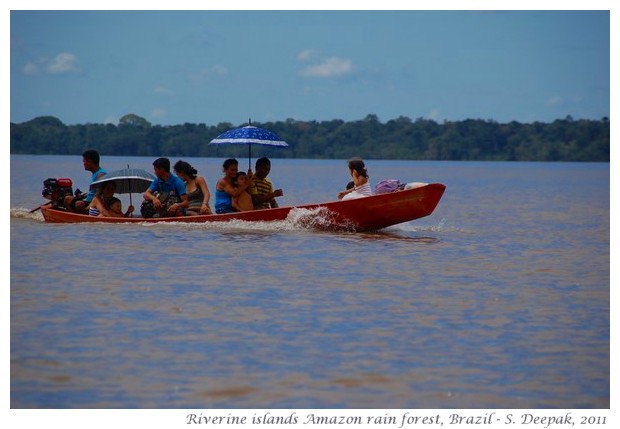 The high tide had come and seawater from the Atlantic coast some fifty kilometres away, came in and swelled the river. These mangroves with water that rises up and goes down, with a change in its salinity, are a special ecological system that is home to different plan and animal species.

As we reached Abaetetuba, I thanked both Solange, our guide, and Michele, our canoe driver.

After all this, the last thing on our list was a visit to some tea estate in Darjeeling. To go there was one part of the pleasure and the next best part was to sip a hot n nice cup of tea there! It was really a divine experience and I had about 3-4 cups of tea- each of a different variety!