Not many people would plan a trip to a place called ‘Lakhimpur’ which is more popularly known as ‘Lakhimpur Khiri’ so when an opportunity came, I started scouting for information on what can be done there besides the main business, the one for which you get paid to visit such a place. Well, it was not hard to discover that Lakhimpur is the town connection to U.P.’s only National Park, called ‘Dudhwa Tiger Reserve’. The rest was routine, getting maps, asking people for a decent hotel, requesting a friend to get us a booking at a forest rest house and so on.

I know by now I am sounding very very drab, as someone who only gets to travel for business and fill this website of the accidental sojourns he is able to do. Whether it was ‘Getting Lost in Sambhar’ or ‘By the Lanes of Aminabad’, infact some of the alert and regular readers would have probably guessed it since I wrote a road review about a week back. While the bets are being won on this, let me take you to the journey which we undertook in the last week of May.

We started early morning from Ghaziabad and drove till Lakhimpur. You take NH 24 and cross Hapur, Moradabad, Rampur, Bareily and ShahjehaNpur (its spoken with full N and not the nasal N, also read the names again, its like a crash course for NH24, click here to read a review, so much of distraction) and take a left from Maigal Ganj. From there you are on country-roads (take me home kinds) which are hard to miss, not that its a great country side to look at but at 10 KMPH with not many vehicles around you have enough time to make a coffee. Here’s one of pics of our pit stops in the country side, getting some fresh water-splash for Pihu. You wash your face with some fresh ground water and you are charged again, a great sanity keeper activity when you are searching for tar for many miles (so many that you’re just a little short of a tar-mirage). So after surviving the no-road stretch of about 25 KMs, we reached the town, the great Lakhimpur. 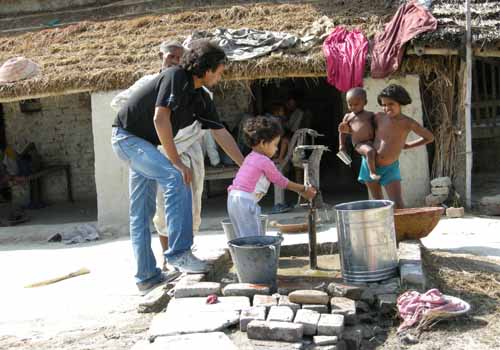 On the way to Lakhimpur

Lakhimpur is a very small town, a part of District Lakhimpur Khiri in the Tarai region (foot hills), which happens to be the largest district in UP. The name Lakhimpur is believed to be originated from the word “Lakshmi”, the goddess of prosperity. I also read somewhere that it has come from ‘Lakshman’, the youth bro of Lord Rama. Anyway, lets move on. It is about 440 km from Delhi (towards South-east, 125 km short of Indo-Nepal border) and is connected from Lucknow and Barreilly. No airport, the railway line is also meter-gauge, hence to go from Delhi, one has to change one (from Lucknow) and two (from Barreily) trains to move from broad gauge. Roads are drivable, except for some stretches. Lakhimpur & Khiri are the twin towns in the area. Khiri is predominantly inhabited by the Sikhs, uprooted from the 1984 riots in Punjab (possibly that’s how Lakshmi and Lakshman become Lakhmi or Lakhman). There would be an equal population of Hindus and Sikhs in Lakhimpur as well. (to an extent that some of the communication – signages etc. – were in gurmukhi, the punjabi script!) Major occupation is own-business – mostly related to agriculture (sugarcane) and trading (from Nepal).

“Heeralal Dharmshala” is the centre of town in terms of activity. There is also an active market lane which women frequent. For entertainment, there are a couple of cinemas, 2 main temples (frog temple and Shiv Temple). “Shivam Restaurant” is probably the city’s only decent eating joint and is jam-packed on most evenings.

Not that many of you would really care to know about this town but since I have been through it, I thought I would do a brain-dump. We stayed at ” K K Hotel” (I hope I am remembering this right) which was actually more of a banquet hall with some rooms. The tariff is Rs 800 for a/c room. There is no restaurant but you can tell the boy and he would get it from the market. Pretty fair so far. We reached there by 4 in the afternoon, ate some food from Shivam restaurant, rested, went to market, did our work and then crashed.

Dudhwa was for Day 2 so hang on. Some early part of Day 2 was also spent doing the business and then we moved towards the tiger reserve. Its about 90 KM from Lakhimpur and the nearest small town is Palia. The roads are pretty ok, or good; and it took us about 2 hours to reach there. While I was driving down, I could now actually see the real countryside. Unlike the small-town mayhem of congestion, small shops, litter and grabage, this drive was actually about vast green fields, mango orchards, tractors, colorfully dressed woman, wheat-husk stacks, belled cows, bamboo plantations and almost everything which you would associated a good drive with. Since its a terai region, the weather felt moderate even in May.

After Palia, the last meter gauge rail head, we found ourselves at the entrance of a bridge. While we have been to many bridges which are narrow and there are folks on either side to regulate the traffic, we haven’t came across a one like this before. This was a bridge which was also shared by trains. Yeah. I mean what you just read. You drive over the track and if there is an oncoming train, well you wait and give the way. I didn’t see any other bridge on the side and it seemed like the only way to go to DTR over times. This is the bonus pic of this post. 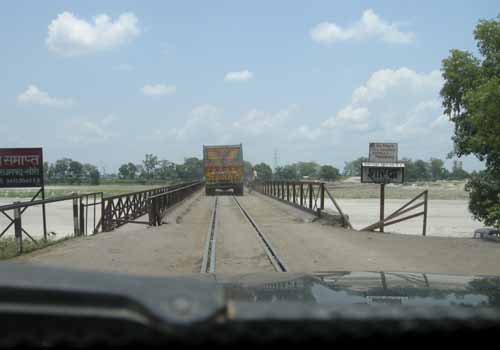 So after about two hours, we found ourselves at the entrance of DTR. The drive from the entrance to the forest-rest-house area goes through lush green forest. Since it had rained very heavily the previous night, there was water every where. Usually the road is at an elevation so it was clean.

Dudhwa tiger reserve is spread over an area of 614 sq km. The northern edge of the reserve lies along the Indo-Nepal border while the southern boundary is marked by the river Suheli. It is home to a large number of rare and endangered species, which include tiger, leopard, swamp deer, hispid hare, Bengal floricans, etc.

Just like Corbett or other National Parks, Dudhwa has ‘Forest Rest Houses’ as well. The ‘Dudhwa’ forest rest house is one of the best equipped ones, just like Dhikala of Corbett. It is powered and there are A/C rooms. We met the local guardian and now comes the damp-squib (literally!). Well, it had rained very heavily the previous day and because of this, one could not venture into Jungle or take jeep-safaris.

Wow! So much for all the drive!! We asked again but reality doesn’t change too much in a short span of time. Well, what about elephant safari. So the elephant safari happens from ‘Sathiana’, another forest rest house. And you would need to take a jeep to reach ‘Sathiana’. We were suggested to enjoy the delicacies in the local cafeteria, which we didn’t after a brief inspection. We had two options. One to take the room, go to Nepal (Dhangarhi, buy some smuggled goods) and then wait for our luck to get better and stay for the night OR just drop the idea. We spent some time around, took a drive towards Nepal, and decided to head back.

Here’s a pic on the same road.

We crossed Palia Distillery on the way and reached Dudhwa. In absence of any jungle photos, you can get some high by looking at it. 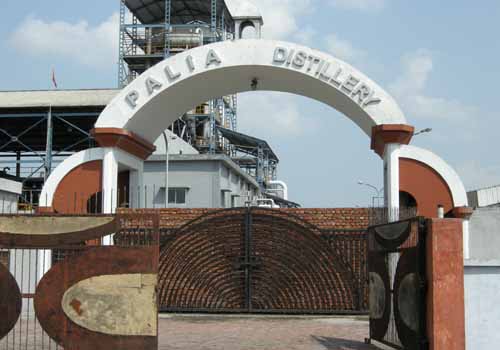 We took a different route which took us directly to ShahjahanNpur (remember N is full n and not a nasal n, now dont just smile and say ShanjahaNpur couple of times, one two, good progress). This time it was all the more scenic, we actually drove through many jungles with lush green shrubs, poplars, eucalyptus and other tress accompanying us all the while. Since there is a train connection as well, we also spotted a small railway station but it was getting late and I wanted to get back to my home so we restrained the idea of getting down and spending some time.

We were back by late night on Day2. So two days, about a thousand KM of drive and no real jungle but it was more than worth it. Dudhwa is now definitely much closer now. What do you think ?

The first step is always the hardest step. Thankfully one of my flatmate Vikas agreed to come with me (on his Avenger !! ) upto Agra to see the Taj and then he would return back to Gurgaon .
We didn’t pick the Yamuna expressway since if you are planning to go Agra from Gurgaon, taking AH1/NH2 through the Sohna Road is always a better option. It prevents you from passing through Delhi traffic, plus no tolls to pay like that on Yamuna Expressway ( and no more tyre bursts !!). The road is pretty good upto Palwal, 50km from Gurgaon, from there AH1 meets NH2 which directly takes you to Agra. Although it was mid April, somehow it started raining around 7 AM and weather became very pleasant, what else a rider could ask for !!

We stopped for chai sutta on two occasions and reached Agra by 10 AM. After entering the Agra city , it took us around 1.5 hrs to reach the Taj because of small roads and heavy traffic although it was only 13 kms from the highway. Anyways seeing the magnificent Taj and Agra fort was quite refreshing. Now my roomy Vikas had to go back to Gurgaon and I had to cover the rest part of my journey alone. I was up for it.