When I was first asked to go to Doha, Qatar to attend a conference in May 2006, I was quite thrilled. The venue of the 2006 World Trade Organization (WTO) talks and Asian Games should be worth checking out, I thought. So I packed my bags (opting for conservative dresses, since I was unsure whether Western culture had invaded Doha or not) and headed for the capital of Qatar.

But my experience at Mumbai international airport was a sign of things to come. My Qatar Airways flight was delayed by two hours and the bizarre thing was that even the airline staff was not aware of this! Perhaps that explains why there were no sign boards or flight timing charts at the airport. Every 10 minutes, an air hostess would open the boarding gate and the passengers would rush towards it, only to discover that boarding had been delayed. Finally, after rushing to and from the gate several times over a span of two hours, we were allowed to board and we took off for Doha.

Situated on the east coast of the Qatar Peninsula in the Persian Gulf, Doha used to be famous for its pearl fishing villages till 1949, when the city started to get a facelift due to oil production. Today, this picturesque, tiny deep water port is one of the most important trade centres of the Middle East. It’s also the only place in Qatar which has hotels and an airport. Thank God for small mercies! 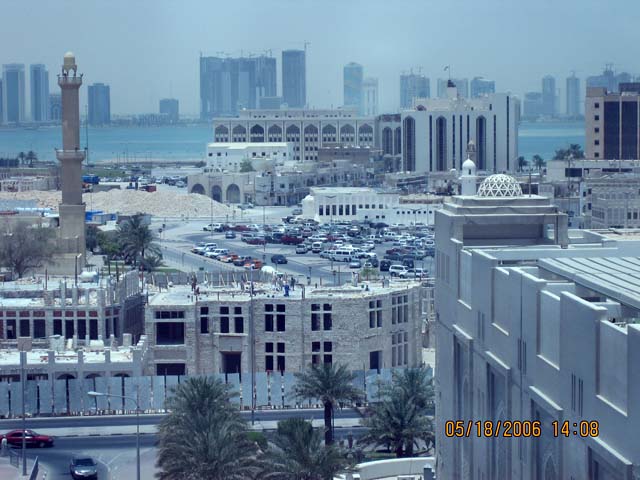 Nevertheless, around the Gulf, Doha has earned the unenviable reputation of being the dullest place on earth. You’ll be hard-pressed to find anyone who’ll claim the place is exciting. Don’t get me wrong. There’s nothing amiss with Doha as such – you’re unlikely to get shot or mugged there. Maybe that explains why there are no policemen on the roads.

The bay is pleasant and there are enough interesting sites around town to keep you occupied for a day or two. These include the Qatar National Museum, Ethnographic Museum (Wind Tower House), Doha Fort, postal museum, City Centre mall, traditional souqs and the palm-lined Corniche overlooking the sea, from where you can sail in a ‘Dhow’ to Palm Tree island. Doha’s tourist itinerary even cites the vegetable bazaar, fish market and golf course as places of attraction. But that’s another story.

The first thing that struck me and my other media colleagues as we drove to the hotel was the sparkling whiteness of the landscape, devoid of greenery or any colour for that matter. The city seemed almost lifeless in the scorching summer heat, with hardly any people on the roads even though it was peak rush hour (10 am) on a weekday. Leave alone humans, there wasn’t even a single bird in the sky!

Dull-looking structures against the backdrop of the white desert give the city an almost ethereal look. Most of the buildings are of similar shape, size and colour (white or beige), situated far apart from each other. On seeing the vast expanse of barren land, I couldn’t help but comment, “You’ll never find this in India; slum-dwellers or builders will be the first to pounce on it!” 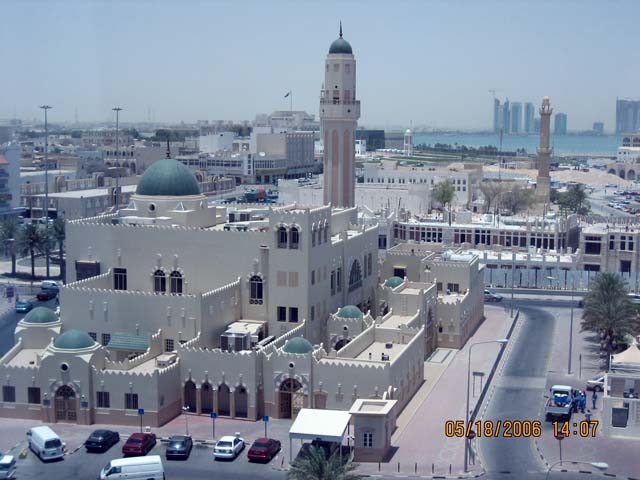 After freshening up, we decided to visit City Centre mall in the afternoon since our conference was to be held later in the evening. Our hotel (un)graciously refused to arrange a taxi for us. So we set off on foot, hoping to find a cab on the road. But we had forgotten one thing – it was 12 noon and the outside temperature was 55 degrees Celsius! We walked in the searing heat for 30 minutes and still there was no sign of a taxi. So back we went, huffing and puffing, feeling like baked salmon.

When we reached the hotel, I noticed that the underside of my sandals was melting and peeling off! Then the receptionist informed us that in Doha, all banks, offices and shops are shut between 12 noon and 4 pm every day as it’s extremely hot at that time. Why couldn’t she have enlightened us earlier, I thought indignantly? Ultimately, there was nothing to see or do that day except attend the conference in the evening.

However, the most exciting part of our short trip was yet to come. The next day, which was also our last day in Doha, we engaged in ‘dune bashing’ in the desert. We travelled in a convoy of cars to the middle of the desert. Then the tyres of all the cars were deflated to help them sink in the sand and we were off on a roller-coaster ride over the sand dunes. 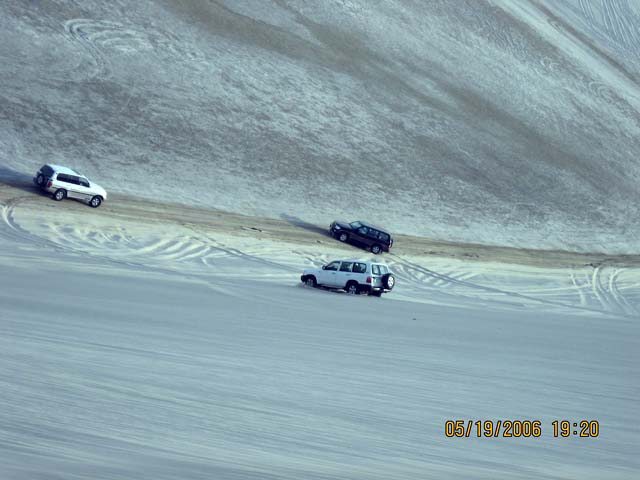 Our driver was very experienced, but he still scared me out of my wits. He would suddenly turn sideways and I would feel that the car is toppling over. Then he would plunge straight down 60 metres at a speed of 120 km/hour and up again till my stomach churned. And just when I would turn white with fear, he would turn around, grin cheekily and ask me, “Zain (meaning ‘good’)?” And I would nod feebly, “Yes, very nice.”

After 90 minutes of non-stop thrill, we drove to an inland sea from where the Saudi border is visible. 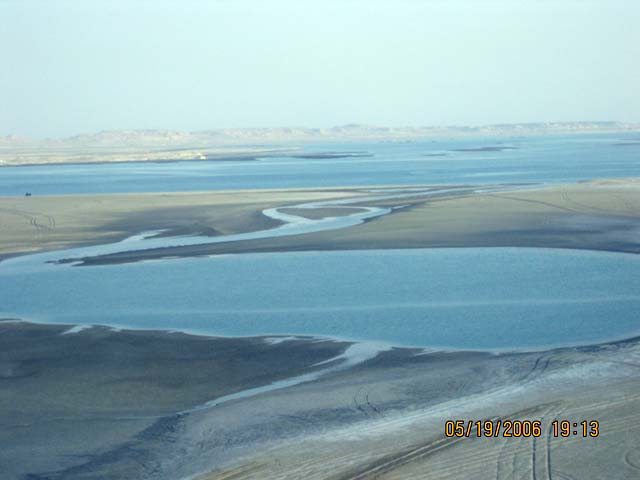 Looking out over the Persian Gulf

As we stopped to catch our breath and admire the view, I realised we were looking out over the Persian Gulf and watching the sunset over Saudi Arabia. Now, that’s not something you see everyday. 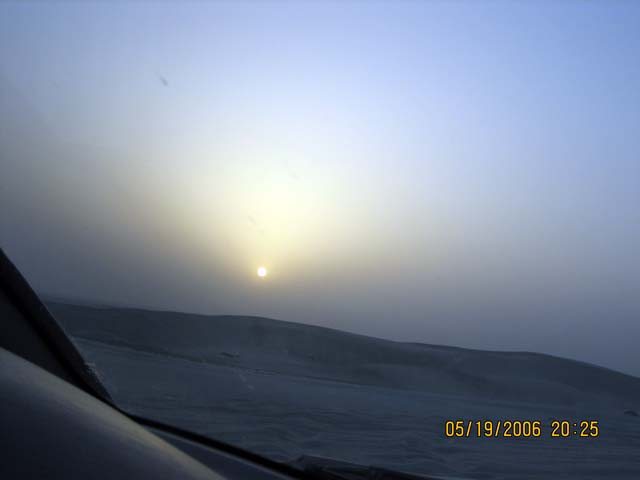 After our tour of the hot desert, we decided to chill out in the mall. This time, we took care to hire a taxi from our hotel after 4 pm. Our driver dropped us outside City Centre mall and told us to hail another taxi on our way back. What he didn’t tell us was how tough it would be to get another cab. Only after we had finished shopping did we realise we would have to wait in a line of 80-90 people for a taxi. Moreover, the frequency was one taxi every 10 minutes! At that rate, we would have missed our return flight to Mumbai that same night. In panic, we approached the officer in charge there and told him about our plight. Thankfully, he was quite considerate and put us on the first cab which came along.

It’s surprising that a city which boasts of world-class infrastructure has no public transport facilities. Oil and gas reserves have made Qatar one of the highest per-capita income countries and one of the world’s fastest growing. Maybe that’s why the local people don’t feel the need to travel by public transport; they have their Mercedes or Limousine to ferry them everywhere! But at least they should spare a thought for tourists.

All said and done, Doha has a lot to learn from Dubai if it wants to make tourists feel pampered. If it doesn’t, the finicky and demanding tourist may well give Doha a miss. As our flight took off for Mumbai, I thought about all the things that make India worth living in – its variety, vibrancy, colour, convenience and zest for life. And I heaved a sigh of relief. Home sweet home…

(Note: A modified and shortened version of the above article was published in the ET Travel section of The Economic Times on June 15, 2006. I have reproduced the original version here for the reading pleasure of fellow Ghumakkars.)

The final approach to the tomb led me to a large open space, perhaps four football fields, where a number of small fires were burning. It appeared to be the dumping ground for the entire city of Gulbarga.