Next day we had time in hand so we decided to visit a Shakti peetha called “Nalhateswari Devi”.  According to the mythologies here is  the “nala” or throat of goddess Shakti, that had fallen and so the shrine came to be known as the Maa Nalateswari. It is located in Nalhati, a municipality in Birbhum District of West Bengal near the West Bengal – Jharkhand border. It is believed that around 1400 years back, it was Lord Kamdev who discovered the larynx of Devi Sati from the nearby Nalhati Forest.

It is said that there is a Nala under the throat of the Devi’s idol and whatever the amount of water is poured, it never gets overflowed. In fact, the sound of gulping the water is heard as humans do while drinking water or any liquid. It is also believed that it was Bramhachari Kushalnan who first offered the ‘Bhoga’, which means the food offerings to the Goddess. This worshiper attained moksha or salvation after worshiping and meditating after sitting on a Pancha-munda-ashana. This temple is part of the famous Shaktipeetha Darshan Yatra of West Bengal. 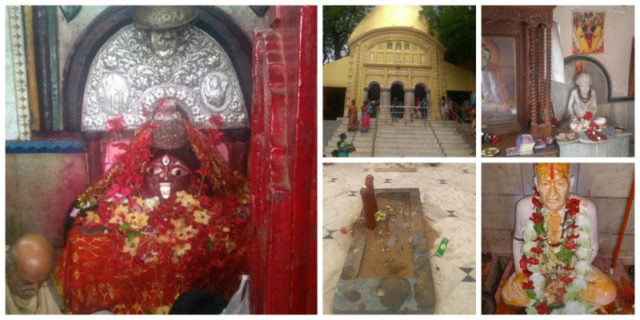 The terracotta designs on the quintessential ‘aatchala temple’ of Bengal entice pilgrims. The temple architecture is very old and signifies the presence of enriched Bengali heritage enshrined in the temple designing. Inside the sanctum sanctorum- Mata Nalateshwari is consecrated. The stone idol of 4 feet height has three eyes (trinetra) and a huge golden tongue hanging in between the teeth. The larynx or the “Nala” of the deity is positioned where the tongue ends. She drinks water creating the sound of the gulping. On the way to the sanctum sanctorum or the garbha griha, Ganeshji is sitting and is surrounded by eight snakes. Rani Bhavani of Natur constructed the Ganeshji Shrine here.

The temple timing is from 5.30 AM to 8.30 PM. Devotees can choose to prefer Tuesday or Saturday to visit the temple as these two days are considered the best ones . The regular temple rituals start with the opening of the Garbha Griha (sanctum) sharp at 5.30 AM. At different intervals, worshiping is performed by the temple purohits (Hindu priests). By noon, Devi Nalateshwari and Her Bhairav is served with Rice Meal for Prasad. Per Hindu rites, this is known as Anna Bhoga. Devotees can have the bhoga for their lunch after the deities are served and worshiped.

By the evening the aarti is offered. We did a very good darshan and proceeded towards Atla village which is the birth place of Holy Sadhak Bama Khyapa. Bama Khyapa is worshipped as son of Maa Tara who despite an occult sadhak did good for everyone and he with his bhakti and devotion as a child to mother became Tara Ma’s greatest bhatkta/devotee of modern history. It is said in Tarapith first bhog for Bama khyapa is offered and then bhog for Ma is offered since Maa cannot eat before her child. 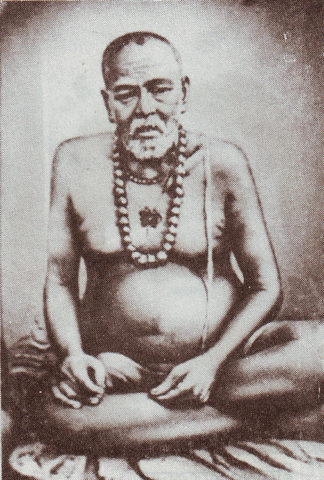 A legend appeared to glorify our earth on the midnight of Shiv-Ratri (Hindu Festival dedicated to lord Shiva and Parvati, as of their Marriage Anniversary) in 1837 AD, (according to Bengali calendar, 12th Falgun (Month Name) in the year 1244). He, “Bamacharan Chattopadhyay” (Bama) was born in Atla village near Tarapith Temple, Birbhum District of West Bengal. His father, Sarvananda Chatterji used to sing Shyama Sangeet (Songs offered to Goddess Kali or Shakti) on different occasions and possessed a small cultivation land.

Sarvananda passed in 1855 leaving Bama as head of family and Bama illiterate and inexperienced had to do all sorts of job in temple but was disqualified so he used to roam here and there near the samshan bhoomi and One day, while Bama was sitting on the bank of the Dwarka river, he noticed a sage crossing the river by simply walking over the water and he was utterly confused. This ;was the great saint Pishach-Sidha.

(adorned with blessing of spirits, who has different types special natural power) Brajabasi-Kailash Pati (name of the Sage), Bama used to stand far away from the crowd that gathered around Kailashpati everyday, but he thoroughly concentrated on his preaching. It was in these preaching that he heard the term “Kundalini” (Supernatural power contained hidden within one’s self) for the first time.

He approached Kailashpati to guide him along the path ;that leads to Maa Tara. Kailashpati rejected his prayers several times in the beginning, but after a number of approaches, Kailashpati promised Bama to show the correct path. From then onwards, Bama regularly used to meet and stay with him in the Maha-Shamshan (great cremation ground). On one Amavasya (New Moon day) night, Kailashpati told Bama to get the permission of his mother to devote himself in Tantra Sadhana  (a type of spiritual Practice, followed by Tantric rituals), thus he wanted to pupilize Bama.

He reminded Brahmamoyee Devi of an incidence when Bama fell sick in Tarapith Temple and was in a state of breathlessness, what she had told to Maa Tara for the well-being of Bama. It was only after this speech that she permitted Bama for the diksha sacrament or reception of teaching from priest)of Samshan yogi (A type of sage who is strongly related with cremation ground, perform his all spiritual practices, staying in cremation ground.

Kailashpati gave Bama the red robe, the trishul (a traditional weapon with three pointed and sharp ends), the rudraksha (seed of a tree, which is known as tear of Shiva), the sindur (vermillion) and took him to a place which is known in Tarapith as the famous “Vashistha-Asan” or “Pancha Mundi Asan” (a seat where the skulls of five living things, namely, new born/adult male, an elephant, a black snake, a monkey, an owl, who died prematurely, are buried)

It is very famous among the Tantriks and is an extremely powerful seat. Kailashpati whispered to him the Tara mantra and asked him to meditate without any kind of ;distraction. He was  advised to sit in this Pancha Mundi Asan and to meditate whole heartedly, on failing which he would face the penalty. Throughout his process of meditation, Bama faced several challenges that included being distracted by Yoginis, Spirits, and so on.

Bama went through all these disturbances and finally he could view Maa Tara on the midnight of Kausiki Amavasya (a special new moon day). Maa gave all the powerful and magical power of Jivita Kunda (a pond in front of a temple where she was believed to be residing and was full of supernatural powers) to Bama. Then he mastered all the skills in Tantra Sadhana by the grace of his first guru Kaulacharya Mokshadananda (another senior disciple of Kailashpati) in Bamachar (a way of Tantra.

He became mad during the worship of Maa, he worshiped the goddess in his own way, and not according to the usual rituals as described in age-old iconography. In the beginning, most of the priests in the temple opposed him, but he proved in his own way that he was doing the right thing and what ever he did, Maa became very happy. Sometimes, he behaved in such a way as if Maa had come there and were present in the surroundings, so, from this point of time, he was well known as Mad saint or Khyapa.

This resulted in his becoming the spiritual head of Tarapith, Bama taught that only consistent devotion, faith of mind and soul is enough for worshiping. There is not any need to follow the rituals of iconography. When he became famous, that he possessed a tremendous super natural power, lots of people from far places came and met Bama to get his blessings, to find solution to their different problems like illness etc.

Bama mostly tried to help them out, but later he used to get irritated as more and more people continued to come to get rid of their problems. Thus we visited his home and then after offering our prayers we went to Tarapith had another session of good food and started for Railway station to catch our train back to Kolkata.

I would argue and request travelers travelling to Bengal to once visit this beautiful place of Maa Tara where in every bit of place you will see mother going and doing things for you and a divine experience will rest inside you as if your mind calling through your inner self “ Joy Tara Joy Joy Tara, Joy Ma Tara Joy Ma Tara “.

If any mistake has happened do give me a honest feedback.