“It is only when we truly know and understand that we have a limited time on earth and that we have no way of knowing when our time is up that we will begin to live each day to the fullest, as if it were the only one we had.”

Some of the reactions when we told people about our plan to travel from Delhi to Hyderabad in a non AC car in the most “pleasant” weather of May :P

So we started from Okhla, Delhi on Friday, the 14th May, 2010 in the afternoon after having lunch. The weather was hot, sun was beating mercilessly but we marched towards our destination. We had booked a room in Hotel Tansen Residency in Gwalior so our first day target was to reach Gwalior which was around 320 kms. We crossed Faridabad, Mathura and some other smaller towns and reached Agra bypass at around 6:50 PM when it started to get dark. We had been advised not to travel after it was dark as we would cover lesser distance in more time due to reduced speed. Another reason was that between Agra and Gwalior falls the famous Chambal region. Still not wanting to look for a hotel in Agra, we marched on. In the meantime, I called up on the emergency no. listed on the a board on the highway and asked the person about the law and order situation and whether it was safe to travel on this stretch at night. 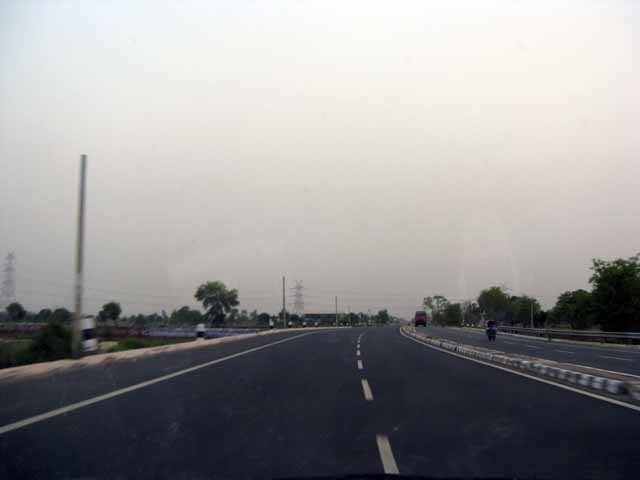 The person on the other side reassured us and told that the highway was in good condition and there were no security issues. So we continued towards Gwalior and found his words to be true(except for a few places where construction was going on). Highway was very good and sufficient traffic was there. One regret was not being able to see the beautiful Chambal valley because of the darkness. I so wanted to click some pics but was disappointed . Anyways we crossed Dholpur and Morena to reach Gwalior at around 9 PM. The hotel run by MP tourism was quite good, room was spacious and everything was fine except the AC which was a bit disappointing. We freshened up, had dinner(which was definitely good) in the Hotel’s restaurant, studied the route ahead and called it a day. 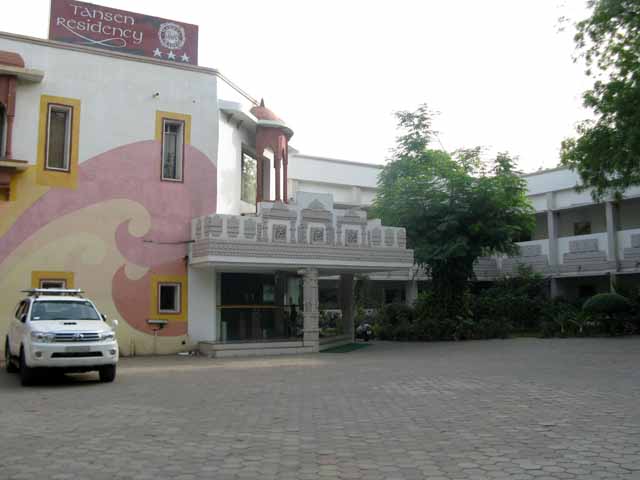 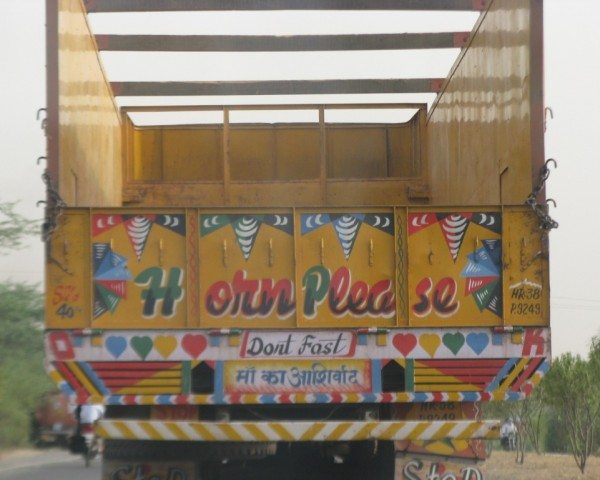 Day 2
We had planned to start early the next day but having gone to sleep at around 12, it was humanely impossible to get up at 5 and then travel the whole day without any fatigue. So we got up around 6, got ready, had a token breakfast(because the restaurant wasn’t open yet) and left Gwalior at around 7:20 AM. Our target for the day was Nagpur(>700kms away) as we had arrangements for stay in the city and also coz it would give us ample time to cover the 500kms Nagpur to Hyderabad stretch on the last day. 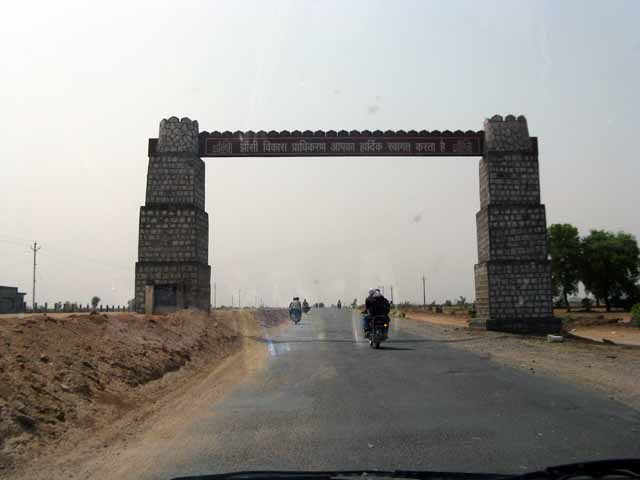 But pretty soon we discovered the realities. We managed to reach Jhansi as per the schedule in around 2 hours but the roads after that were a nightmare. Construction was going on everywhere on the highway and our speed was reduced to a great extent. There were a lot of diversions which passed through villages having infinite speed breakers, children running here n there and cattle moving on the roads. 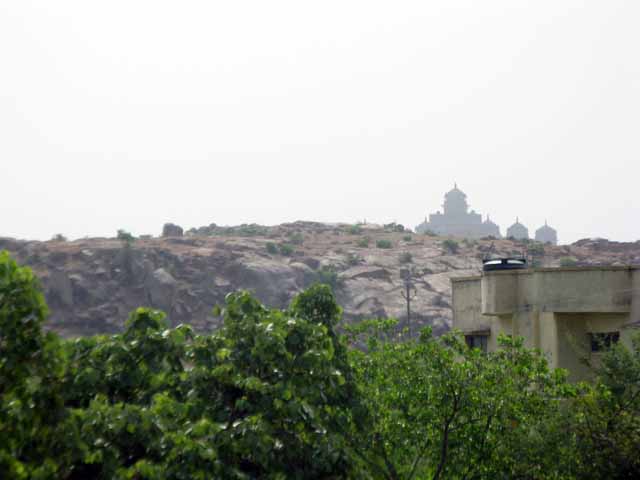 Some beautiful clicks on the way...

We reached Sagar in MP at about 3 PM where we had lunch. By now reaching Nagpur seemed difficult so we thought of staying over for the night in a town which was there on the milestones for quite sometime: Lakhnadaun. We traveled n traveled in the heat n dirt on the broken and still under construction highway. At around 7, it got dark and we were around 40kms from Lakhnadaun. 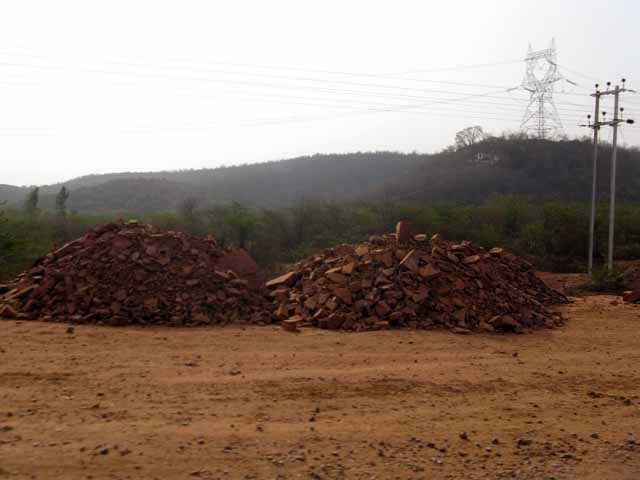 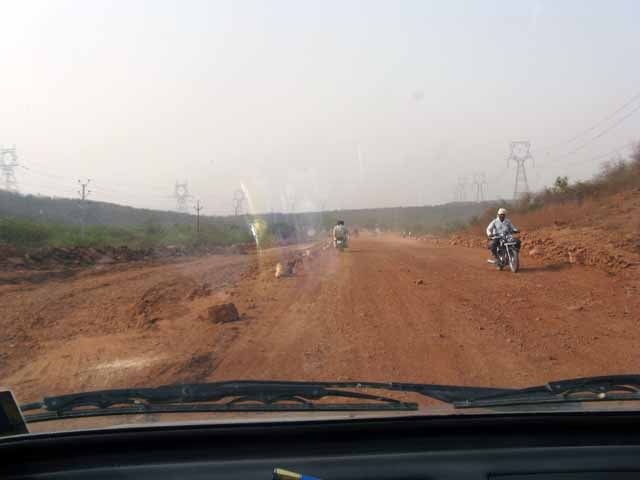 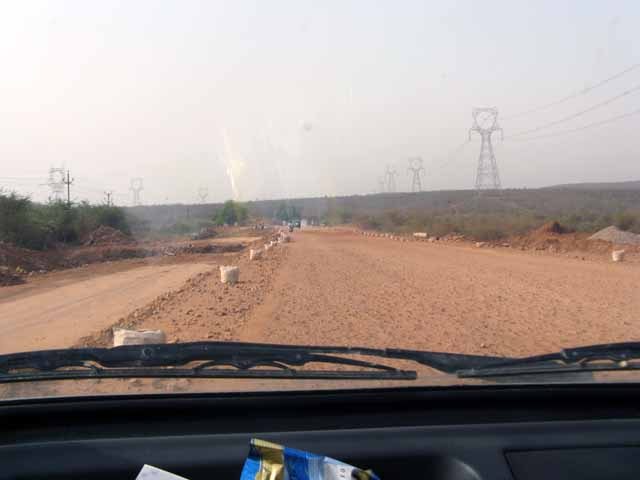 Normally one can expect to cover this much distance in an hour n so did we. But the so called highway was in pretty bad shape and had 2 way traffic on a single lane which greatly reduced our speed . This road had rocks and forests on its sides and with no sign of life nearby it was pitch dark. Moreover the traffic was very very thin so all in all we were alone in the middle of nowhere . Now this was the only moment(s) in whole journey when we felt a bit afraid . The concern was that if we had some problem with the car then we may not be able to find out someone to help us out. On top of all this, the distance to Lakhnadaun didn’t seem to reduce.

It took us 2 hours to reach Lakhnadaun and when we reached there, boy!!, what a disappointment it was . Considering the fact that it was being mentioned on the milestones we were expecting it to be a decent sized town with some good facilities. Instead it was almost like a village having 2 lodges with neither of them having AC. People suggested we go to Seoni which is a city in Maharashtra and had good hotels. Having no other option, we started for it. It was around 70 kms from here but was connected by a 4 lane highway. The initial 6-7kms were in very bad condition and after coming 5kms away from Lakhnadaun, the front tyre burst . Now this was a despairing situation except for the fact that a few meters away was the repair shop. So the guys there worked on it which took almost one and a half hour. We started again and the rest of the journey was uneventful. Reached Seoni at around 12, found a decent hotel and went to sleep without having dinner 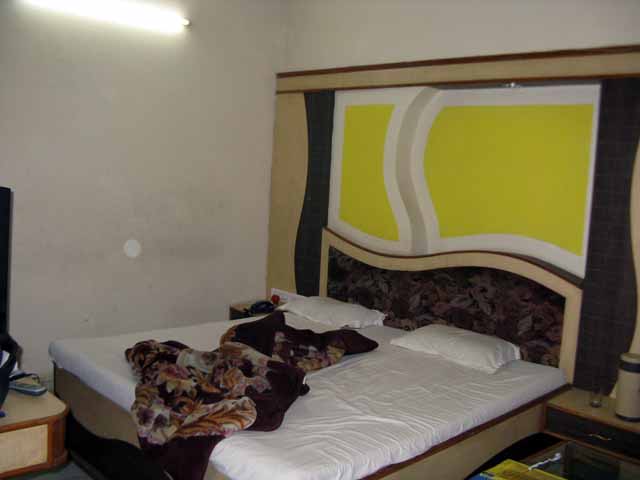 The hotel room at Seoni

As we went to bed past midnight last day and that too without dinner, so got up at around 7AM , got ready and ordered a very filling breakfast which was spicy n tasty. Started at around 8 with Nagpur being around 130kms away. Major portion of the road was two way, two lane highway which was not in really good condition so speed was not that good. 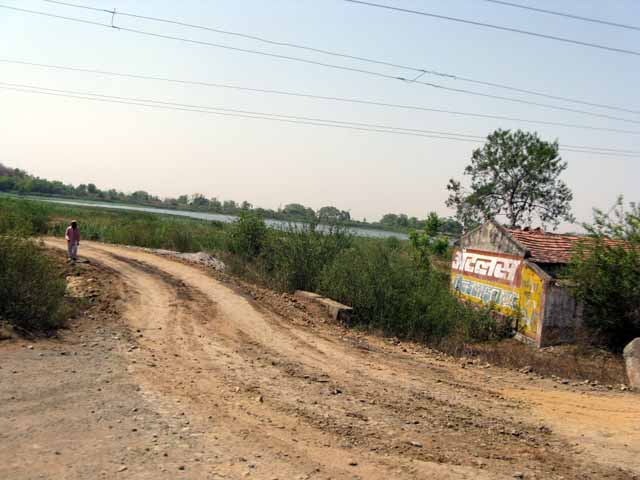 Anyways it passed through ghats which were quite scenic and provided several opportunities for a pic. We reached Nagpur at around 11 AM which was the target, picked up mineral water bottles and continued onwards. Nagpur city is pretty big and nicely developed. The roads were quite good n we could see lot of big buildings and shopping malls on the sides. I also found the city pretty neat and clean. The distance to be traveled was roundabout 500 kms which should have taken around 9-11 hrs depending on the roads. As we were running on a tight schedule and wanted to reach Hyderabad max by 10 PM, we decided to skip lunch and instead made good use of the snacks we had brought with us. 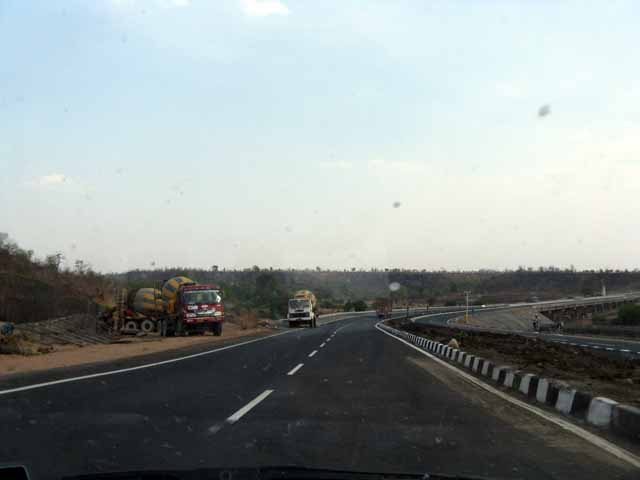 Probably the best part of the journey :)

The drive from Nagpur to Hyderabad was a breeze as most of the way was 4 laned highway with occasional diversions through Andhra villages. It also provided a lot of scenic views on the way. 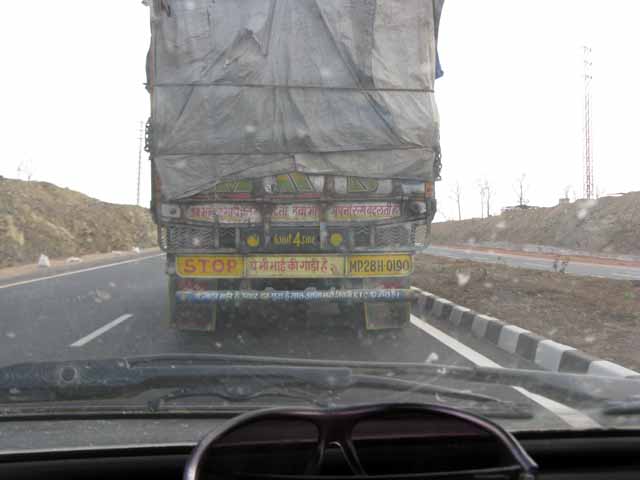 So we just sailed on the road occasionally stopping to have something to beat off the heat(neembu paani, lassi etc) and buying water bottles :cool: This leg of the journey was mostly uneventful and finished happily. We entered Hyderabad at around 8:30 PM and reached home by 9 PM even though bro didn’t know the way to his home properly. :) 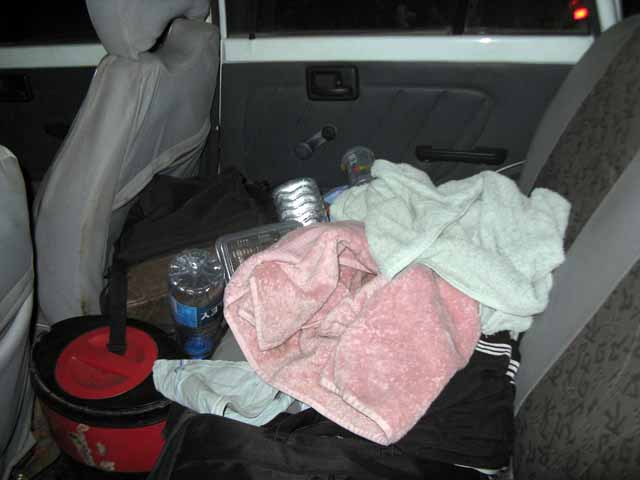 Backseat of the car after 3 days of travel :) 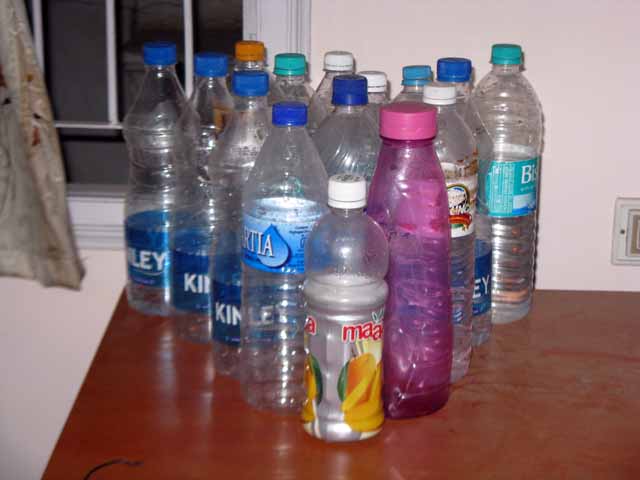 Some water bottles we purchased on the way!!!

Some highlights of the tour:

Delhi to Hyderabad – On the road was last modified: May 29th, 2020 by Rohit Mittal

Rohit Mittal is a student of MBA(IB) at IIFT, New Delhi and has worked as Software Engineer for 2 years before joining MBA. He is passionate about traveling and blogs at http://technik.co.in/wp He writes on a variety of topics including Indian economy & finance and several of his articles have been published in newspapers such as Financial Express.