Finally, the fateful day had arrived – 11th June – the start of the World Cup 2010, South Africa. I was very excited as the main reason to come to London (for me) was to watch the World Cup at sane times, as there was just about 1 hour time difference between the 2 countries. I would be watching the matches at 5 & 8 o’clock in the evening, rather than staying up till 2.30 am in India ☺
So anyway, I woke up at around 9:40am. I had quite a sound sleep. Mausa & Mausi had already gone to their clinics – something that happened to me everyday. Baba (my father) was watching TV & my mom was sleeping. There was a problem with one of the showers & a plumber was supposed to come & fix it.

Despite my protests (as the World Cup opening ceremony was to start around 12) my mom set the ETD of 11.30 am. The plan for the day was that we would meet Aman (my mom’s cousin), Liz (Aman’s wife) & Oliver (Aman & Liz’s son) & then we would carry onto Plaistow to meet Anjali at her clinic. But all this had to be done after the plumber had come & seen the shower. The plumber was supposed to come around 10.30, my mom thought that would be an one hour job max, and we would leave the moment he left. So we rushed through our breakfast, had our bath & got all our stuff in order. So that all we had to do was wear our clothes the minute the plumber left & move out. But we were in for a surprise. I started watching the pre World Cup shows & RM TV. I hadn’t kept a track of time, but suddenly realized it was about 11.45 am & the plumber hadn’t reached. My mom called up Mausi & asked about the plumber, Mausi said that there would be a slight delay & the plumber would come around 12.30 pm. My mom stood there shocked. It didn’t make much of a difference to me as I thought that I would watch the opening ceremony in peace, but then I realized the ceremony didn’t start till 1pm!! Now I sat there shocked!!! But anyway I watched the pre-show & waited for the plumber.

The plumber finally came at about 12.45 pm. He went into the attic & I followed him up to have a look at what attics are about. The attic was full of cotton – to keep the house warm, I guess. He checked everything & said that there was a ‘balance problem’ which couldn’t be fixed today :P

We finally left at about 1:45. Upon reaching the bus stop my parents realized that they had forgotten their Oyster cards at home & so we had to go back and come back. We took the bus from Haynes Road bus stop & reached Hornchurch tube station. From a newsstand which was owned by fellow Indians we bought my day card :P. We first had to get to Canada Waters, where Aman’s house was & to get there we had to change at West Ham!! I was quite excited as I would be getting off at WEST HAM FC’s tube station!!!!!!!!!!!!!!!!!!!!!!!!!!!!! 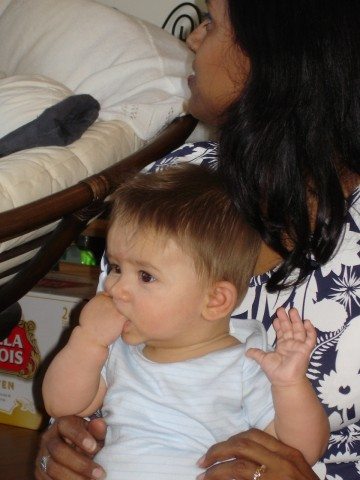 So anyways, we reached Aman’s house, greeted Liz & saw Oli (Oliver) for the first time. He was sooooooooo cute. My mom played with Oli & I switched on the TV & watched the opening match, South Africa Vs Mexico, but I lost interest in the match & started playing with Oli. He was continuously chewing his fingers. We then went onto the balcony & it was a view to kill for! We took some pictures & saw the first half of the match, the scoreline at halftime was 1-0 to South Africa. 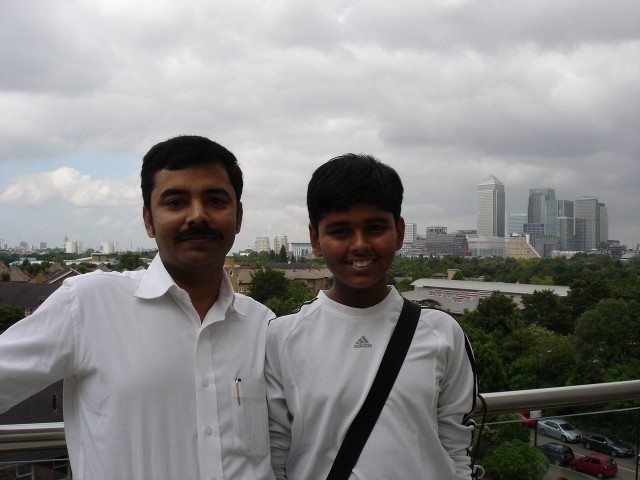 We made a move as we had to meet Anjali at her clinic in the, ahem, “Indian” part of town. We went there by tube & started asking people for directions. But as we progressed we realized that most of the people were Indians, so my dad asked for directions in Hindi, Punjabi, Bangla &, I think, Urdu. One shopkeeper got so motivated hearing someone speaking his mother tongue, that he got out of his shop & offered to literally take us there. My dad would just hear the people speak, catch their mother tongue & he would start speaking in that language☺ . 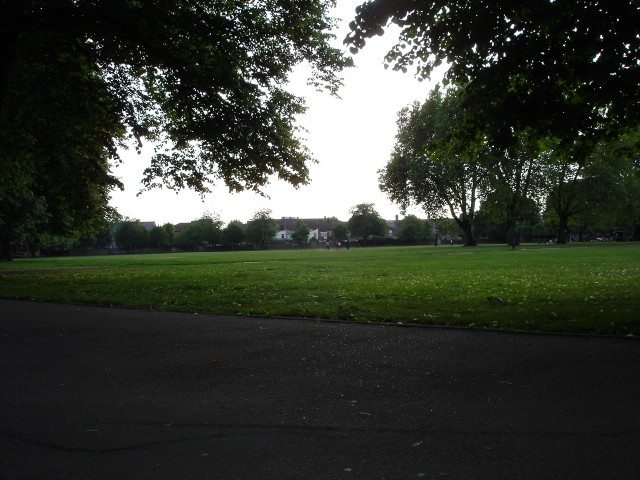 Finally, we reached Anjali’s clinic. She said that she had some 5 minute work to finish & after the work she would meet us at the park which was a little ahead of the clinic. We waited for about 45 minutes, then we went back to call her. We met Mausi also at the entrance; Anjali came out just 5 minutes after that. She took us to her house & on the way I doubted that I was in London!!! There were so many Indians there!!! 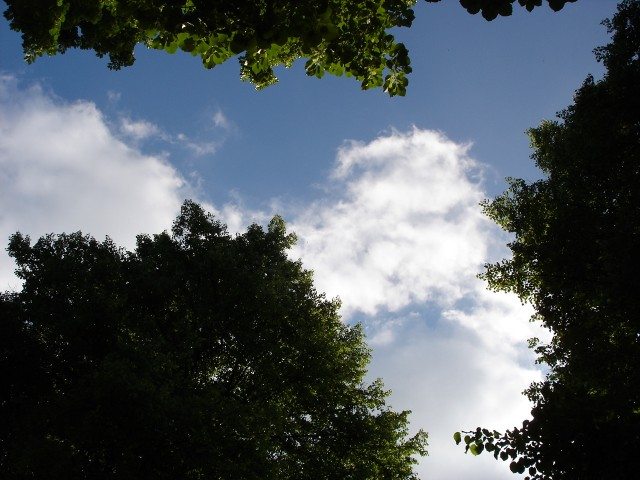 We reached Anjali’s house & settled on the couch ready to watch the France Vs Uruguay match (just for the record, the SA Vs Mexico match ended in 1-1 draw). There was a lot of sun coming in thru the uncurtained French windows. My dad picked up an umbrella and settled on the couch. Much to Anjali’s disappointment, as she had told us to put up the curtains if we didn’t want the sun. My dad told my mom to get something to eat, so my mom & Mausi went on the quest to bring us some fish & chips. I was supporting France & Germany in the World Cup. I had an argument with Anjali & my dad about Thierry Henry’s hand ball & how it was unintentional & it was the fault of the referee for not seeing it. Halfway through the match Anjali went out to do something – we never saw her again that night. We ate Grapefruits – something that I used to grow in Farmville but had never eaten it. My mom & Mausi finally managed to get some decent fish & chips. We finished the fish & chips & asked Anjali where she was & she said she was at a friend’s place & told us to carry on. The match ended 0-0, I was quite disappointed by France’s dismal performance. 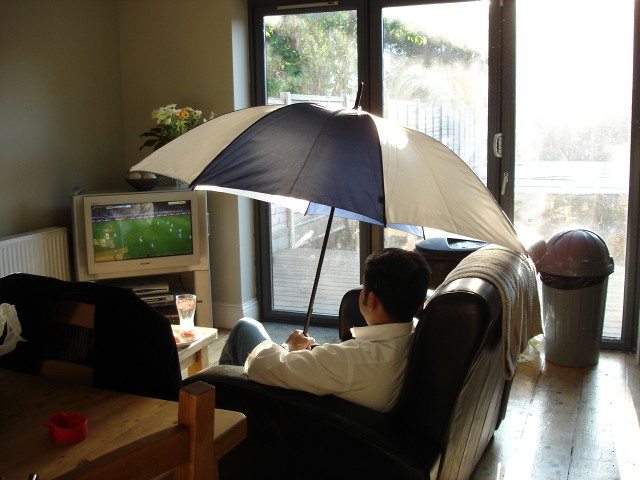 We finally went back home & watched ‘Who wants to be a Millionaire’ till about midnight, & then we went to sleep. I twisted & turned till I fell asleep quite late.

It has a big entrance and you land up into a courtyard flanked on all sides by large, tall halls with stairs going up to the next level. You catch a breath to take a good view of overall topology and head towards the stairs. The initial bat-poo-smell is familiar but gradually the stench begins to get the better of you. The palace has seen good times and that is apparent from those murals (and more when we would visit Chitrashala), persian glass-ware and all things which are signature of forts. The jharokhas (Bay windows?) give an impressive view of the town and the Baoli. In December, the haze was thic but I would guess that in a better weather the view would take you few ages behind. The old, stunted-appearing, town almost feels like a scene from the film ‘Rudaali’. We walked around, with the help of a local guide/care-taker who patiently opened the locked doors so that we could appreciate the once-royal palace. The overgrowing stench, bad upkeep was now winning so I got into a conversation with the caretaker. He told me that the place is undergoing a litigation. There is a very thin layer of support staff to take care of the place but all they try to do is to keep the hooligans off and wait for well-meaning travellers. I didn’t want to make it more difficult for the caretaker and wished him luck and we proceed to 2nd floor/3rd level. Large rooms, supported with crafted pillars and brackets. The usual Torans (welcoming motif at the entrance) with elephants proudly protruding their long trunks.