It was now our second and last day in Edinburgh. Our main aim for the day was to visit the Edinburgh Castle, and then from there on see what all we’d have time for.

We woke up at about 7:30 am, which was, again, one of the earliest times we’ve woken up on our vacations (ever).  We went downstairs for breakfast and got ourselves the usual – bacon, toast, eggs, baked beans, hash brown and sausages. Dad tried the grilled mushrooms and tomatoes too; I decided to give both a miss. We then went back to our rooms, got our acts together and quickly left to see the sights. We planned to follow the same routine as the day before – get on one of those HOHO (Hop On – Hop Off) tour buses, take another round of this magnificent city atop that bus in this, well, damp weather – to say the least – and then make our way to Edinburgh Castle. And well, we did just that – we got on the bus at the same spot as yesterday (no England team bus this time thoughL), took a round and clicked almost 150 pictures of more or less the same things we had clicked a day before.

We told the tour guide about our plan to visit the castle, and he encouraged us to take entry tickets to the Castle on the bus itself – the price was the same as what we’d get if we bought them at the counter in the Castle, however, we were promised a no-waiting-in-the-crowded-line entry with these tickets. He told us we ought to get off at The Royal Mile, and told the driver to stop the bus when our stop came.   We got off the bus, and it was as if we had got down into another time.  We were in the medieval Old Town part of Edinburgh (the other part being the Georgian planned New Town). 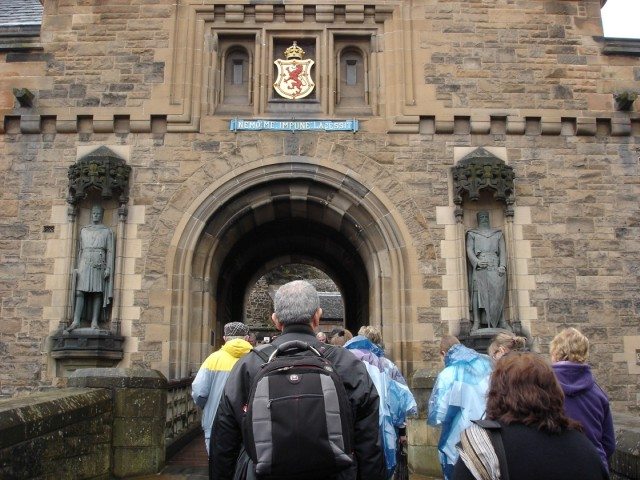 The Royal Mile,as the name suggests, is a mile long street.  It runs through the centre of the Old Town and connects two royal buildings – Edinburgh Castle and the Palace of Holyrood (Holyrood means Holy Cross), which is where the Queen stays when she visits Edinburgh. We were told that the Queen was coming to Edinburgh the next day, and the Palace was being spruced up.  Since this was our last day in Edinburgh, we would be missing that (not that she was inviting us to tea or anything like that). We would, at best, have got to see her motorcade. 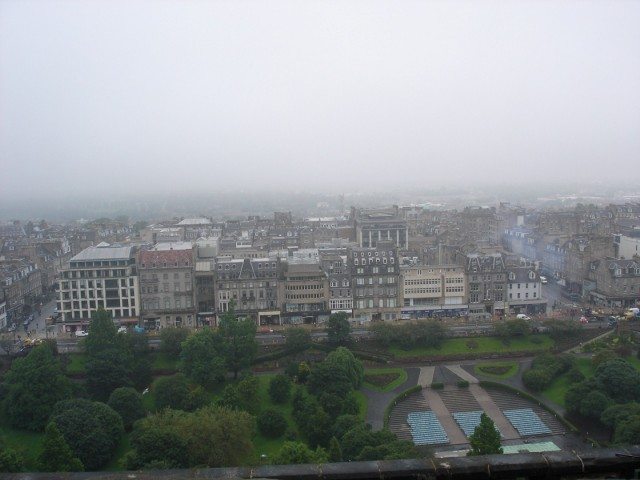 We started our walk towards the castle, and crossed streets with interesting names. These streets are called ‘closes’, our tour guide also referred to them as ‘wynds’. They seemed like little streams branching out of the main river.

It was an uphill walk from there to the castle, which more than a few people were walking. The Castle is on an extinct volcano and The Royal Mile is on the ‘tail’ of that volcano, so we were mostly walking either uphill or downhill. We could kind-of see the castle right from the point we got off the bus, and I couldn’t wait to get in there. I could understand why everyone said that the Castle dominates the city skyline – I had been seeing it from far from so many points on the HOHO bus. 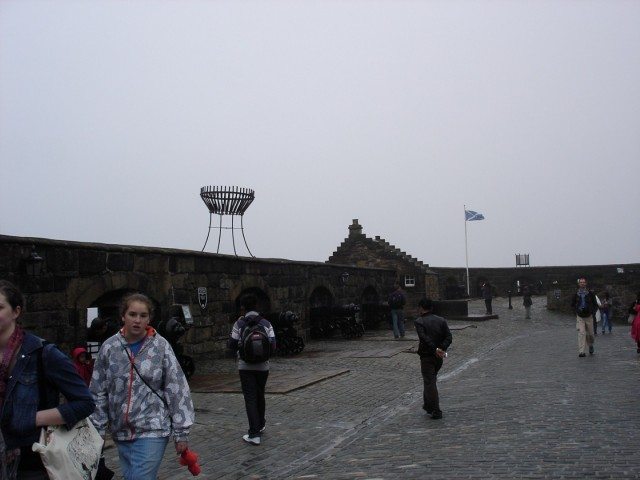 First we had to walk through an arena kind of structure – with seats on either side of the broad walkway and flags of various countries on the periphery. I saw the Indian flag fluttering in the wind in Scotland and it sure felt good.

The main entrance had NEMO ME IMPUNE LACESSIT written above (Latin), meaning “No one attacks me with impunity” —motto of Scotland and of the Order of the Thistle 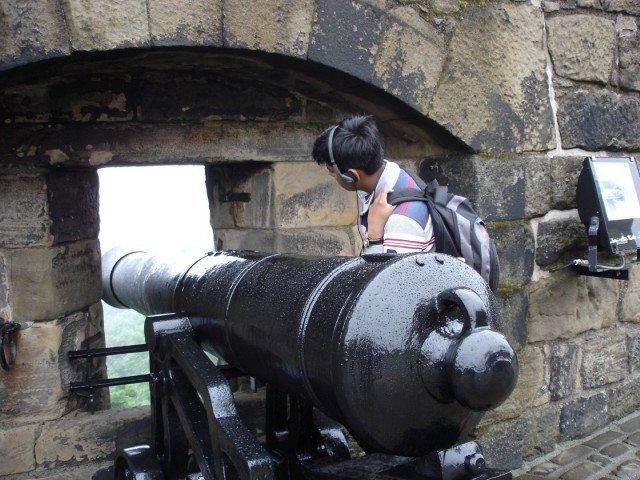 Post that little stadium we reached the main castle entrance and the ticket stand.  As promised, we did not have to wait in the long line (of about 3 people) and were ushered straight in. I’m sure the castle has many more visitors than that, and there must be times when the lines are really long, but today was not one of those days. It may have had something to do with the fact that it was cloudy and drizzling and wet. 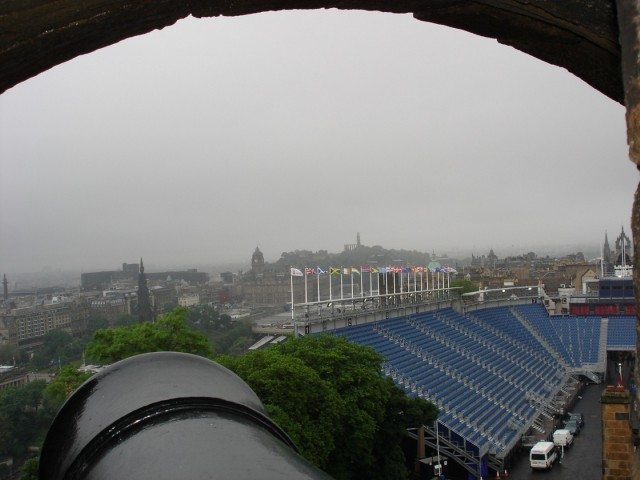 What the Gun saw…

We bought ourselves little audio guides – basically a player with headphones that takes one through a tour of the castle in a systemic manner. The rooms/exhibits were numbered, and we could explore the castle at our own pace. The climb to the castle became steep as we went up the cobbled path. After the long trek that started at the Royal Mile, we finally came to the outer fortressing of the castle, from where you could see the castle rather clearly in the distance. It was like the castle you see in Narnia movies, complete with stone walls and cobbled ground, cannons on the ramparts, towers, everything. Except that the towers in the Narnia castles are taller. The view from the ramparts was spectacular – the city of Edinburgh was laid out before us, looking like something out of a story book, the mist giving it an almost magical feel. 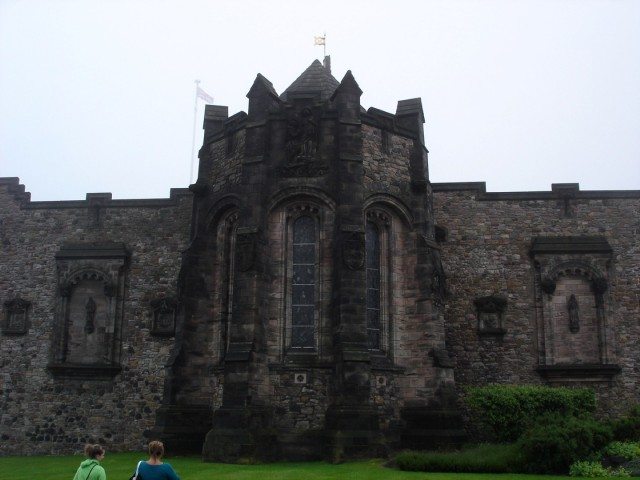 The main courtyard had the Scottish National War Memorial, which we thought we’ll see on our way out (high hopes) as we were eager to go inside the castle.

Our tour guide had told us about the One O’Clock Gun that is fired every day (except Sundays) exactly at 1:00 pm so that the city can set the time in their watches accurately. We didn’t hear it on our visit, so we didn’t get to match the time in our watches with theirs.

The best part of the castle was an exhibit where they traced the story of the symbols of the Kings and Queens of Scotland – the Royal Crown, Sword and Sceptre. It told us how they were once lost, then found, then hidden to keep them safe from invaders, then found again after many years. There were wax statues depicting important events in the history of the symbols. At the end of the tour of this particular section they actually showed us the Royal Crown, Sword and Sceptre. They were kept in a protective glass case (of course) and we were not allowed any photographs. It was fascinating to think that we were looking directly at something so many great men had once held and used. 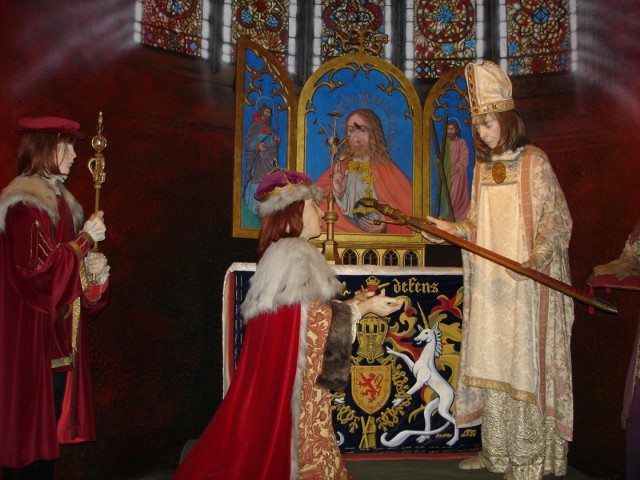 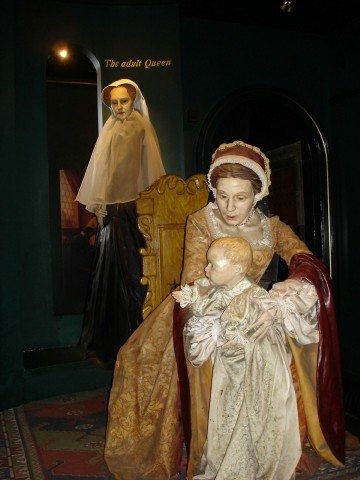 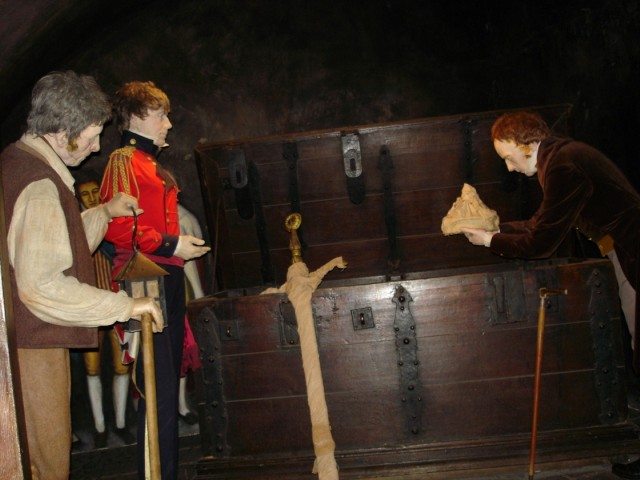 We then wandered through The Royal Apartments, were where the Kings and Queens lived. Frankly, I expected much bigger rooms. The ceilings were ornately carved, with candle chandeliers and the crest painted towards the top of the wall. Most of the walls and flooring were wooden, and there were big fireplaces in the rooms. 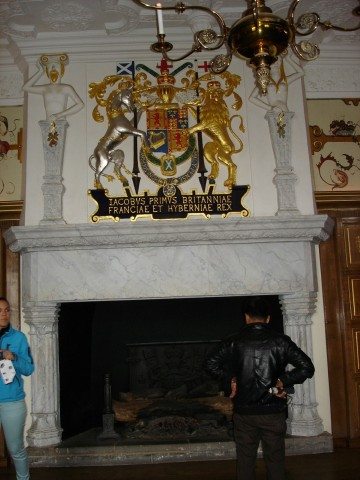 There was another interesting exhibit called the Prisons of War exhibition.  This is where the captured sailors from many countries were locked – in the underground vaults. The prisoners used to sleep in hammocks, in some rooms there was bedding below and hammocks on top. The vaults used to be rat infested. I was wondering at the plight of these soldiers – sharing your living quarters (and food) with rats. There were items that the soldiers used to entertain themselves with – games of dice, cards, and some things that I couldn’t figure out how they could be entertaining. I saw that the food rations per day included meat and bread. 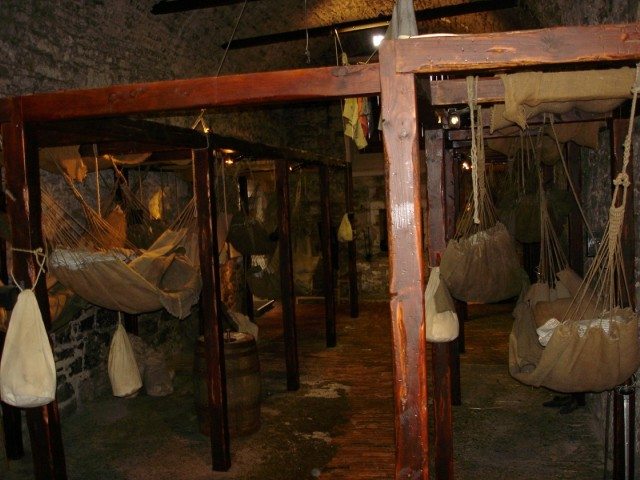 Living quarters of Prisoners of War

I got to see a collection of the weapons and armour used in the olden days displayed in the Great Hall – there were mainly swords and spears and shields. Most looked too heavy to lift.  There was a small Chapel too – St Margaret’s Chapel – which is supposed to be the oldest building in Edinburgh. It has seen and survived the sieges and the battles.

And did you know? It is possible to have your wedding at Edinburgh Castle. What a great idea Sir Ji! 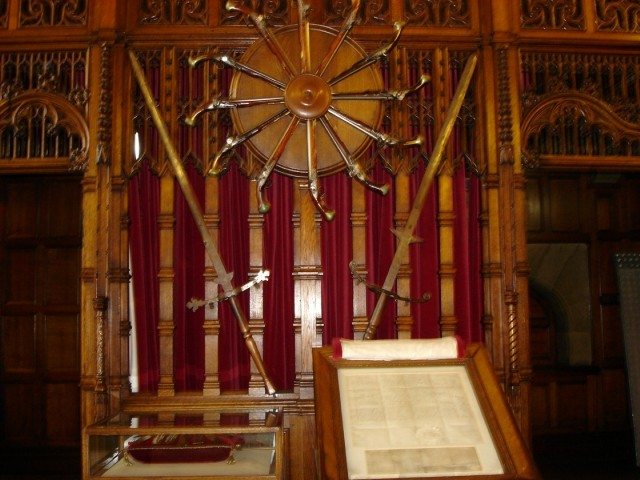 By lunch time we were done with our castle round and thus we decided to move on to what was next on our list – exploring the Royal Mile and looking for the other 2 attractions – the Camera Obscura and Mary King’s Close.

All in all, the visit to the castle was an enthralling experience. 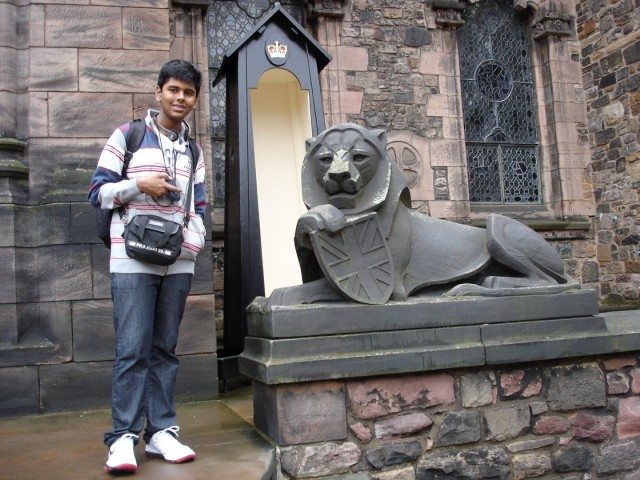 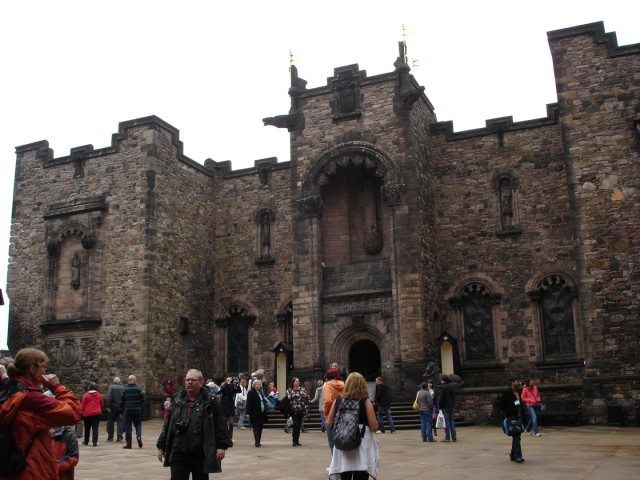 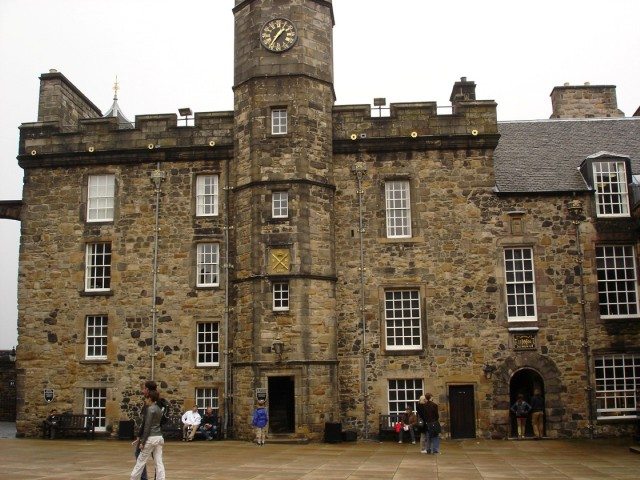 We have recently been to Sangla….Chitkool and Kalpa……. Sharing our experience of this exicting journey