No special plans, we were to visit Yumthang. Fuel rationing being a very important issue in this trip, we were not very sure if we were heading towards zero point. However, the biggest obstacles were the two lazy asses who enjoyed the sleep to the fullest and refused to wake up. It was a very very cold morning and we two were the last people starting from Lachen for Yumthang, maybe.

We skipped breakfast and hurriedly packed up our luggage, and finally set sail for Yumthang at around 6:45am. The sun was bright and the sun rays from the back of the snow-clad peaks looked magestic. Yumthang is around 22kms from Lachung, and the roads were amazing, only apart from 4-5 sections where the river was right in the middle of the road and you will almost tend to bounce off from your bike while pouncing on to that challenge. The 18kms ride took us to a corner after which the valley was surprisingly wide with steep rock arêtes bordering it. 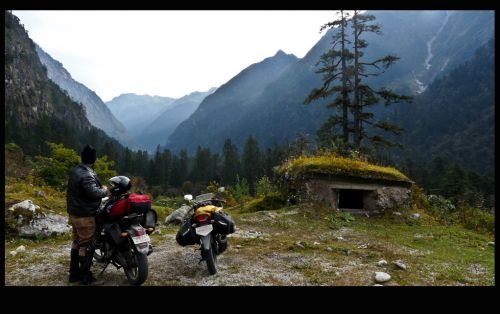 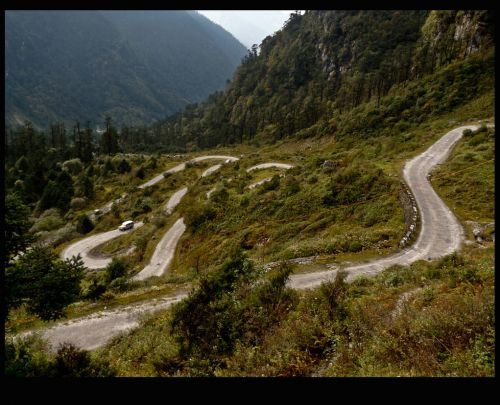 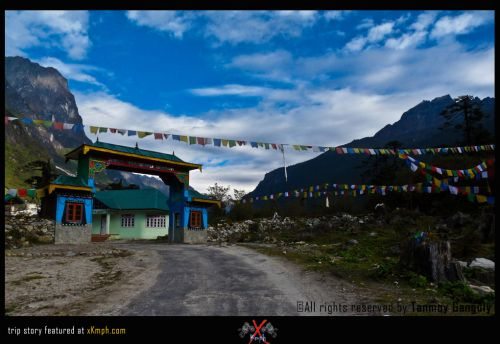 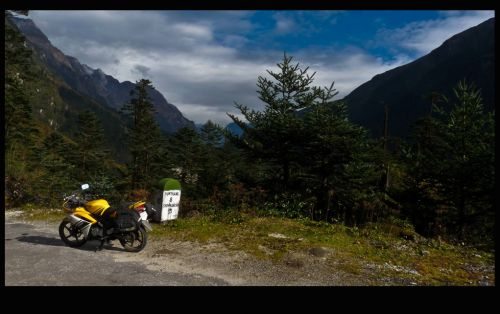 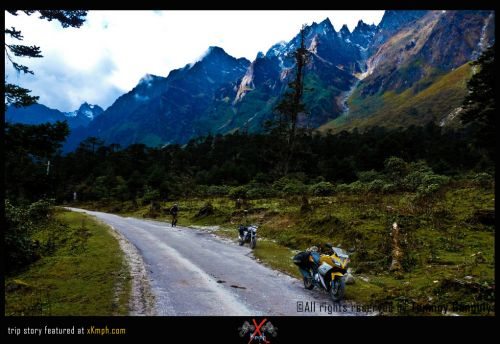 We were already feeling high and were feeling sad for people who sit at home. We finally rode to the large field at Yumthang just beside the Lachung Chu River, and time was never recorded after that. At Yumthang we attracted a lot of tourists and for a while felt like celebrities. Everyone wanted to know about us, some were horrified by our guts and some din’t believe.

We took loads of photos of our machines and so did every other visitor we had. The Yumthang Valley is visited heavily by tourists and hence the place wasn’t really the best place to hang around for bikers in search of solace. We chose an abandoned suspension bridge to be our getaway. Yumthang treated us well, and it was a good sign of what was in store for us. 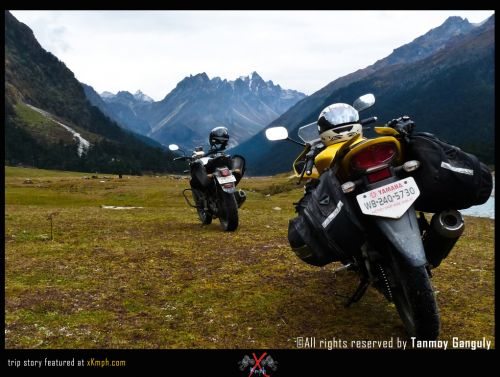 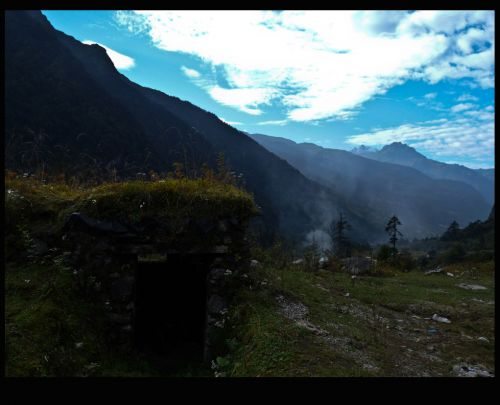 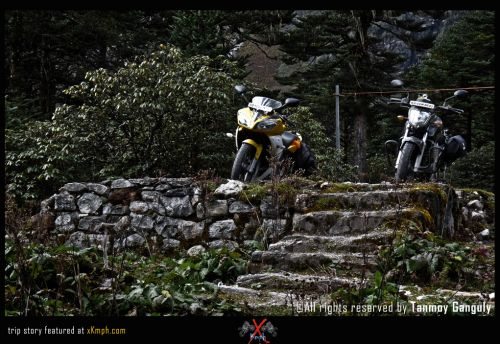 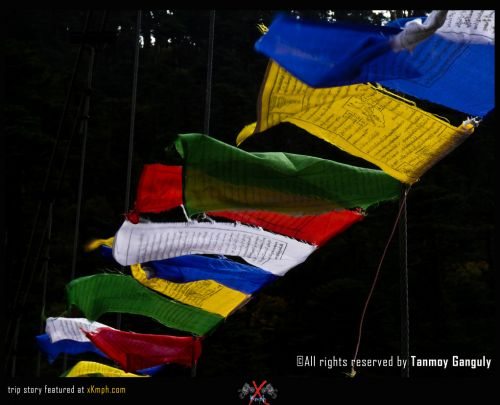 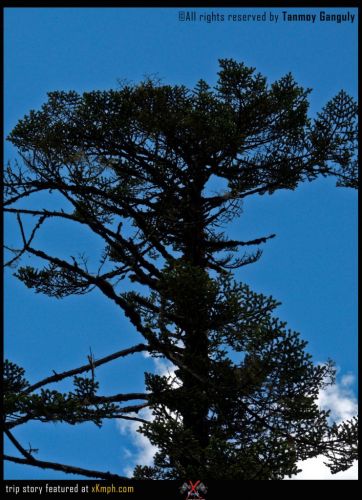 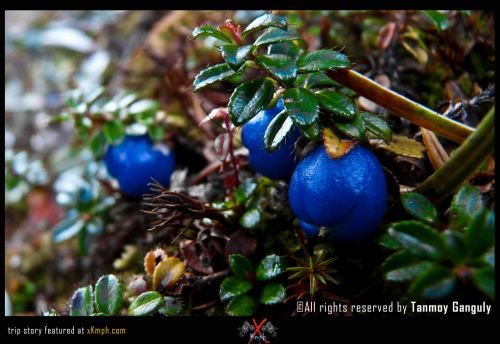 The road to Yumthang is 22 Kilometers, with basically very good winding loops going uphill. There are some sections where the road is washed away by the river and you will only have to tackle those sections to come up to the beautiful Yumthang valley. 14 kilometers from Yumthang is Yumesamdong or Zero point but the total road is a boulder mess till there. There are numerous sulphur springs at Yumesamdong and if you plan to included it in your plan keep a whole day for Yumthang and Zero point and come back to Lachung/Chungthang in the evening. 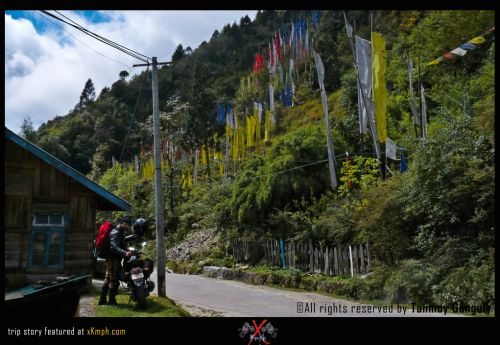 From Yumthang we returned back to Lachung and had a heart & tummy filling Maggi bowl soup, perhaps one of the most delicious dishes at that moment. After the lunch cum breakfast we headed towards Lachen, without much happening we reached Lachen well before our estimated time and hence we decided to push further up to Thangu. Lachen is 29kms from Chungthang and again Thangu is 32kms from Lachen. The road from Chungthang to Lachen isn’t as beautiful as the Lachung one but it wasn’t much of a difficult terrain. But the way up to Thangu was a challenging one and as the altitude kept increasing, the FZ started showing signs of low oxygen, Avik da had to show his fitness levels at certain places as the bike had to be pushed and pulled at certain stretches. I also had to deflate my tires at a butt break, as the tire pressure inside the tires was way too much due to the low air pressure outside. The ride finally ended onto an endurance ride of 2hrs from Lachen and we finally parked our bikes at 14000ft above sea level. Unfortunately, my bike also had a casual crash inside Thangu. The road to Thangu was absolutely different from the ones we had encountered till then, very rugged with pebbles and stones all around. The climb at places was through very high gradient and the terrain made it even more difficult, however we made it in one piece and singing. 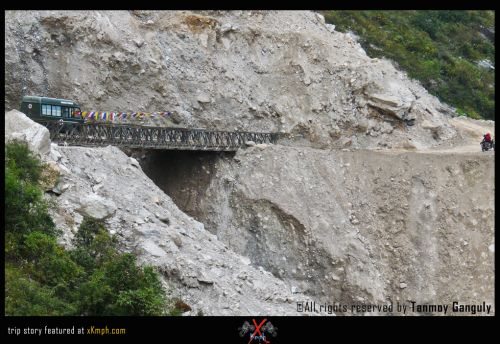 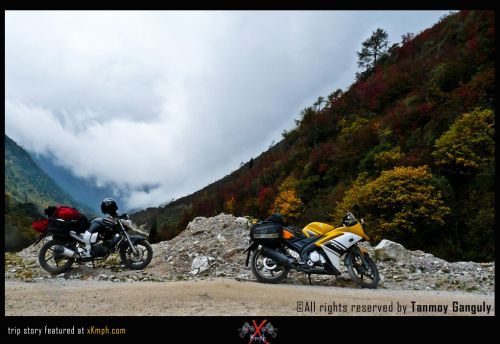 Personally, Thangu is a much beautiful place to stay as it is much serene and your can feel more with the nature. Hotel Dragon, where we stayed, was run by a Lepcha aunty and she was very hospitable. Thangu is at an altitude of 14000ft, hence it wont be a good option to stay if you are having heart problems and prior breathing problems. Even a lack of general fitness might give you an uncomfortable stay at 14000ft as the low air pressure and lack of oxygen might induce AMS. Never make a direct climb to Thangu before spending one ore two nights at 9000-1000 ft. Enroute you will have to submit photocopies of permits at Lachen and also at Thangu army checkpost.

Act III, Scene 4: Nightlife at Thangu
The lodge that we stayed in was a very lively place that night. The aunty who took care of all the cooking served some amazing tea & omelette to warm us up. The environment in that kitchen was warm as well, as the army jawans also came there for an evening chit-chat with the locals. We had a hearty chat with them and were later joined by 5 other bikers from Road-Rollers (Kolkata). We all talked a lot among ourselves and finding our own people from our own joyous home was truly a cherished experience. We were served with Yak’s meat and egg curry, and yet again I ended up eating Avik da’s share of the meat as well. The night finally came to a silent stop with the hope of the best morning coming up. Incidentally we took the same room in which our xKmph team in June had stayed.

In my last and concluding part, we would go to Gurudongmar lake and be back. Hope you are enjoying the ride.

I'm an ADVENTURIST I'm a MOUNTAINEER I'm a BIKER I'm a PHOTOGRAPHER ......and my interests extend till the horizon!

It was nice and quaint, and very, very green. About half an hour into the journey I realized that it seemed almost criminal (for lack of a better word) to not listen to the Beatles on a train-ride across England, and so I kept down the book and whipped out my headphones, and generally just peered out the window watching the green world pass me by.