Ramanagaram is a sizeable village about 50 km south-west of Bangalore on the way to Mysore. It could have been like any of the thousands of villages in India, unknown and ignored by urbanites except for its sole attraction. The surrounding flat plains are dotted with rocks, boulders and hills. For nostalgic film buffs, this is where parts of the Indian classic Sholay was filmed. My colleague would not believe it until he could be shown the exact rocks and paths that Gabbar Singh and his men had trampled. 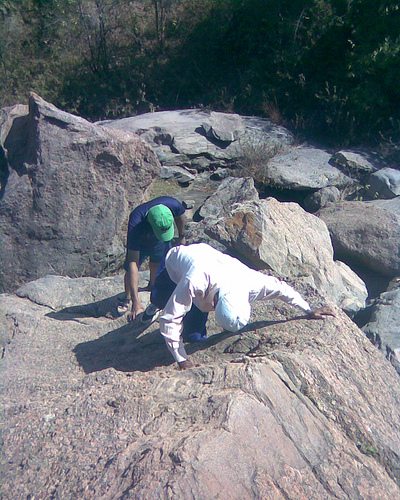 That's me climbing and followed by my friend

We could not show him those exacts rocks and paths because our purpose was different. Four of us from office had gone to Ramanagaram to climb some of the low boulders. A couple of us had decent rock-climbing shoes. I had to settle for my running shoes that are so unsuited for this activity. Only one of us had some experience in bouldering and we didn’t try anything challenging. The boulders we climbed today were at a height of 15 feet maximum.

The weather-beaten boulders must have been standing here for hundreds of years, even before Ramesh Sippy discovered it. Weathering has revealed chiselled points and edges of hard rock, many short ledges and little cracks. Although there is enough in the way of grip, the difficulty for me was to push myself up with my feet, along a route that is not so obvious when you start out from the ground. A lot of this depends on your level of confidence and technique but with the support of my colleagues I managed a small achievement today. 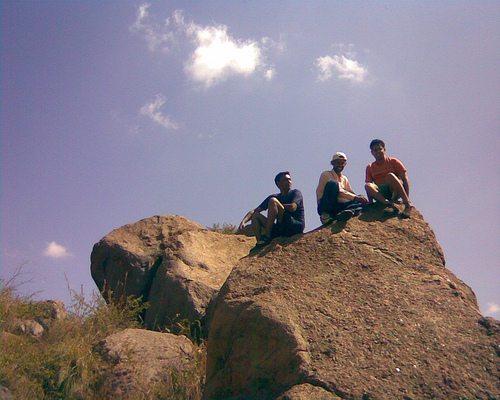 We did it without ropes, which is the usual case with bouldering. There are tall cliff faces and larger boulders in and around this area for proper rock-climbing. I have read elsewhere that people have climbed some of these cliffs and there are even graded routes. 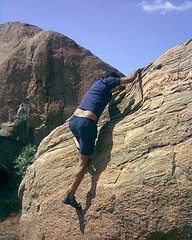 A small boulder with a tough route 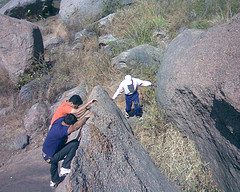 On a different day, I would have come here to do hill walking and rock scrambling. These are much easier activities that involve little risk. But what I did today was fun.

Change is born when there is a need or demand for it. Ghumakkar monthly newsletter too is changing – to a more convenient and accessible format. It will now be published directly on our website in the name which we have christined as “Monthly Digest”.

The decision to shift from Newsletter format to Monthly digest happened based on the feedback we have received and from what we have learnt over last many months. And hence this change. We believe at the end of every month, the Monthly Digest will be a collation and celebration of the FoG, Insight, Author Interview, new Authors’ introduction, Featured Story etc. We value your feedback on this and other points which you feel should be brought to our notice.