I recently had an opportunity to visit Chitrakoot by Road as part of my official travels. The summary of the route followed is given below

The onward Journey was a blur of confusion. We started at 10 am on a Sunday morning in a jalopy old Tata Indica. The route to Kanpur has been well explained in Ghumakkar and needs no mention. Suffice it to say that there re still huge traffic jams at the entry point to the bridge leading upto the Ramadevi Chauraha. There is a flyover being built to directly connect NH 25 (Lucknow – Kanpur) to the NH 2 (Agra – Allahabad) in the air – Until this is built – beware of that road there huge lines of trucks and in this case the smaller the car, the better one can maneuver between these behemoths and be on our way. Anyways we cleared Kanpur by 12 pm and were well on our way to Fatehpur via NH 2 when the confusion started. We were told to take right turn to Bindki somewhere enroute to Fatehpur. The first turn led to a railway crossing which was permanently closed due to repairs and we were advised to go back to the highway and take a right further on. After proceeding on this for abut 30 minutes we grew a bit suspicious due to the lack of oncoming traffic. We were old that the bridge over the Yamuna was closed and were told to take a shortcut to Bindki. unfortunately a large number of trucks were taking the same shortcut and we proceeded at a snail’s pace and reached Bindki by 2 pm and not even halfway to Chitrakoot. We finally found the Banda Road and promised ourselves that from now on we would stick to the major roads. The Fatehpur – Banda State Highway was pretty good while the Banda – Chitrakoot NH 76 was a different story all together – very jarring drive indeed. There is a right turn about 3 kilometers before Karwi town to Chitrakoot Dham at a place called Bedi Puliya – Chitrakoot Dham is 4 km from this junction. We finally reached at 7.30 pm a full 3 hours behind schedule.

The return journey was more organized as our driver had made enquiries and decided to follow the route mentioned above. At Banda we were lucky to be pointed to a bypass to Fatehpur. The road from Fatehpur to Lalganj was again surprisingly good and so was the Lalganj – Bachravan route. At Bachravan we connected to the Rai Bareilly – Lucknow highway which of course is kept in pristine condition for reasons which are not too far to seek. The journey started at around 3 pm and we reached at about 9.30 pm.

All told the onward journey was 280 kms. 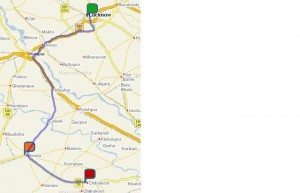 and the return Journey was 270 kms. 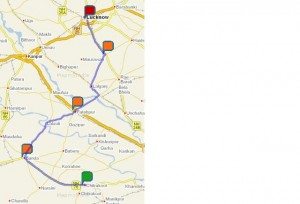 Then panda took us to Anand Bazar area of temple and went away to collect Mahaprasad for us. It was offered to each of us on pattals i.e banana leaves. A huge variety was there but I think children will not like this as it consists of rice, daal and several other items most of which is not liked by children. At last we were offered Rabri, which was very tasty indeed and satisfied our taste buds.