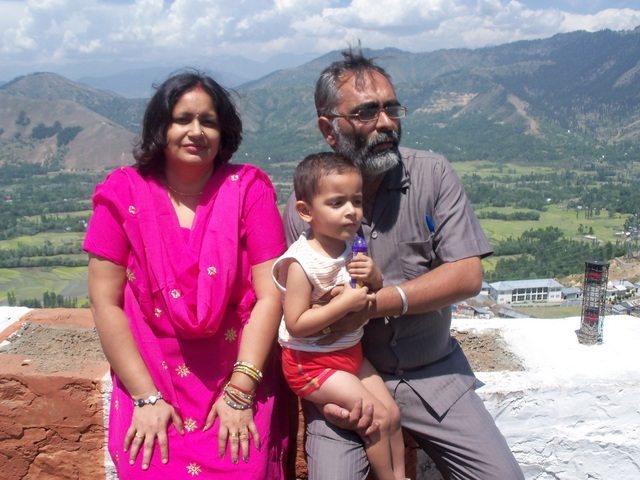 Yours truly with wife and Pavani

RAMBAN: Ramban can be taken as a midpoint on this highway till Srinagar. Though at that time rush of Sri Amarnath yatra had not started yet but convoys of army vehicles ensured that there were frequent traffic jams. The road stretch near Ramban(about 20-30 km ) is in bad condition and dangerous what I observed. River Chandrabhaga (chenab) is in full flow near Ramban and the scene is spectacular despite the road condition. One encounters a place called khooni nalah also as it is the place where most of landslides take place.

First glimpse of the valley 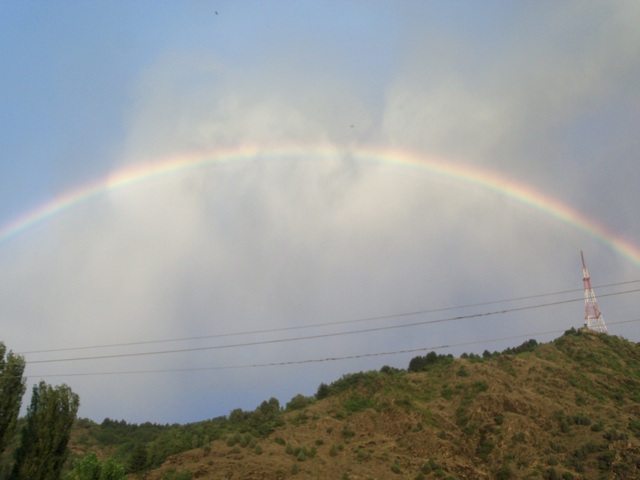 Rainbow welcoming us to the valley

Banihal is the place famous for the tunnel, Jawahar tunnel. The tunnel is rightly hailed as the life line of Kashmir valley as it connects the Banihal area with  Qazigund area of the valley. The scene changes dramatically after crossing the tunnel . One gets to capture first glimpse of the valley after this tunnel and it is the real scene stealer. Dil chura leta hai..… The tunnel is well maintained by CRPF jawans. From this vantage point onward it is downward journey till Qazigund. 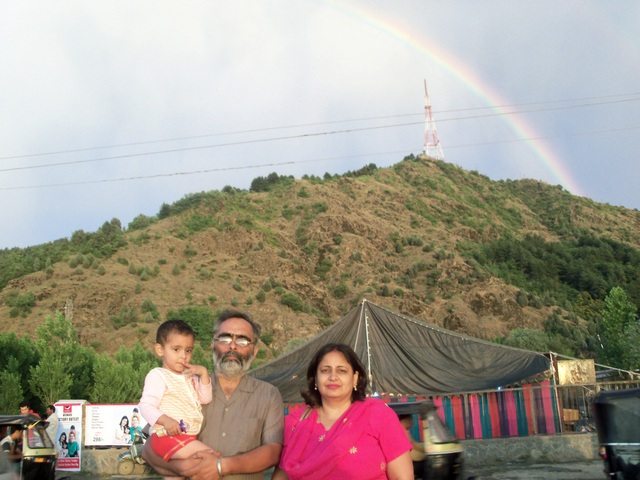 Another view of the beautiful point

Qazigund: The town, gateway to Kashmir valley is also known as dry fruit bowl of Kashmir. We stopped there for chai-pani (not the other kind. hahahah…..) . The place has got about 20 shops selling dryfruit. My wife was interested in buying walnuts and it was done. 2-3 wooden toys for the kids also managed themselves. I had thought that this woodwork would have been native but in Srinagar I came to know that most of these items are manufactured at Saharanpur and brought down here for tourists. (Saharanpur-– dear Sushant kindly comment). Frankly speaking, the food which we had there was not tasty .We really had apprehension of getting good vegetarian food in the valley for reasons best known but to be frank in Srinagar we did not encounter any such problem. Qazigund-Srinagar stretch of about 72 km it is mainly plain stretch of road. A beautiful stretch of road lined with pine trees and deodar trees presented a beautiful view. Small scale industries manufacturing mainly cricket bats from the famed Kashmir willow were encountered on this stretch of the road. A small town, Pampore, famous for Saffron agriculture welcomed us en route. I had heard about Pampore that it was famous for kesar kheti but was seeing for the first time, the vast fields though at that time flowers of kesar had not bloomed. Pampore had been home town of Lal Ded  and Habba Khatton, the sufi poetesses. Flower of saffron is purple in color and around Pampore there were signboards indicating export houses and sellers of Saffron. The genuineness of Saffron for us was very difficult to be judged as we bought some in Srinagar. After some time we had entered Srinagar and as usual search was to begin sooner for a nice accommodation now.  Though I had some addresses of the hotels taken courtesy internet but no use as when you enter the city, you are surrounded by the agents. It happened to us also and applying Murphy’s law, all the addresses were of no use and we were soon being escorted to a guest house by some unknown man. hahahahahha…… We reached Bishambar Nagar area where some of the guest houses were located and after some bargaining and haggling ,accommodated ourselves in a nice guest house.

The owner lived on ground floor with first floor being converted to guest house.

Overall the arrangement suited us . In that street many guest houses were there Most of the tourists at that time of the year- June 2011 were on LTC package unlike us. It was about 4 P.M that we were settled in the guest house and decide d to go for Shikara ride on the beautiful Dal lake in one hour. I had known about Dal lake but not certainly about Nagin lake which I came to know after coming here. Jhelum traverses through the town beautifully.

All of us decided after reaching the guest house to relax a bit and then go to Dal Lake. Bishambar Nagar was the area where our guest house located along with many other guest houses. Srinagar boasts of many such localities which have got Nagar as its suffix which is a positive sign. Just on the back side of this locality where we were staying was the road which could take us to the beautiful DAL…. . after 5 minutes our Qualis was on the road which is famous as Bolulevard road in Srinagar and the beautiful DAL was on the left side (Jahan tak bhi nazar jaye) and on the right side were showrooms, dhabas, restaurants and other shops. The scene was just marvelous and my thought was …. YE KAHAN AA GAYE  HUM….. We see pictures of the lake in the news papers or sometimes in television but can not gauge the extent of this lake from those visuals, this is what I think as the mighty DAL which was in front of me had rows and rows of houseboats parked in it . THE HOUSEBOATS WITH EXOTIC NAMES APPEARED TO BE LIFELINE OF THIS LAKE.  (Char Chinar, Dreamland, Kashmiri beauty, Gulistan, Gul Gulshan Gulfam and numerous other names ….). The night was falling and the lights were on now , the moon was in its full glow along with numerous stars and the scenario was just out of this world. We had decided to go for Shikara ride the next day and just bask the glory of the scenario that evening.Pavement shopkeepers had started establishing their tiny temporary shops n the pavements along the Boulevard (Shawl, Stolls, Woodwork art, PaperMache objects* and handmade bags were the main items).

* Papiermache art is the specialty of Kashmir in which beautiful objects  are made using this art. Kashmir is famous for this art. Traditionally the waste paper is soaked for many days until it disintegrates .The excess water is drained and the soaked paper , rice straw, cloth and coppersole plate are mixed to form pulp.It is then dries for a few days , then cut in the moulds to get the desired shape and then lacquer is added along with tissue paper and then painted in bright colors to get the desired effect. When in Kashmir, the art is not to be missed. We bought 2 shikaras made of papeirmache that day only as a souvenir but a lot was to come in the next few days. We binged upon the delicious bhelpuri there( Bhelpuri wala was from Bihar and told me that he and his buddies come to Kashmir for 3-4 months in summers and earn a good amount) Numerous Dhabas were on the other side of the Boulevard and our choice randomly was to have dinner at Vishal Dhaba, a decent place to eat, vegetarian stuff especially. We had 2 Gujarati thalis and 1 Punjabi thali there. It was there that I tasted Gujarati Karhi for the first time and came to know that it was sweet unlike Punjabi Karhi which is sour and spicy. Ice-cream was must for kids. When we got free from this routine it was 11 P.M and the scenario was such as if we wee roaming in the Chandni Chowk area of Delhi or Marine Drive. So much rush and jam on the road. Who said? Kashmir was disturbed……… It took Mr. Bhajji about 20 minutes to get his vehicle from the parking lot which was just 1 km away. Ab Waqt aa chuka tha guesthouse jaane ka.