Been reading a lot of travelogues over Ghumakkar lately and had made up my mind to post one when I happen to visit any place. Being the first travelogue of mine over the site, I hope the other experienced and gifted authors would excuse my noviceness or mistakes in the expressing the thoughts. Same time would wish to receive comments to further improve the narration to catch up with standards set by Ghumakkar. As it’s gonna be a long long read, It’s better to break up the content into multiple sections. So, here we go…

Brother in Paris, one sister-in-law in Disney Land, Miami with family and another been to Goa recently, parents in Haridwar Camp, one colleague going to Srinagar… it looked like almost everyone around was roaming one place or another during the summer except me sitting back and planning for the longest self driving trip of mine till date, from Delhi to Manali (roughly 600 km one side). 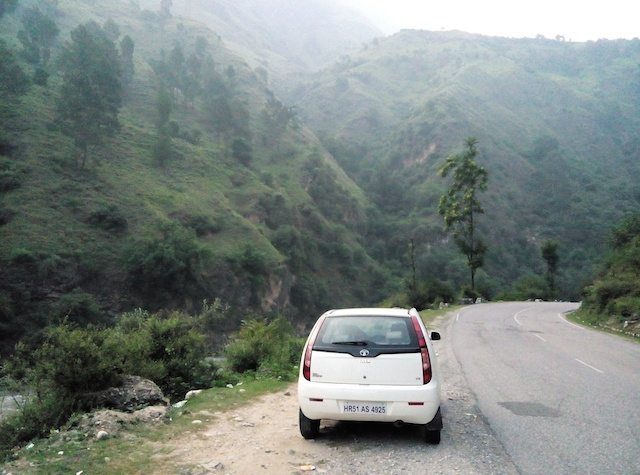 The car at a beautiful joint

Thing with us tech savvy people is, we overload ourselves with information on the routes, places etc months, weeks before the actual date comes and I wasn’t different either. It was just two years before, when I started learning to drive the car for the first time and bought one for self.

The Saga of my car driving lessons

You can imagine that how big a leap forward it was within two years that once a hesitant learning driver now tempting to drive on one of the toughest route leading to Rohtang (though that didn’t happen at the end as I got the cab on reasonable fares & decided not to take any risk). But it wasn’t sudden but gradual step by step evolvement by driving roughly 70 km/ day in this while. 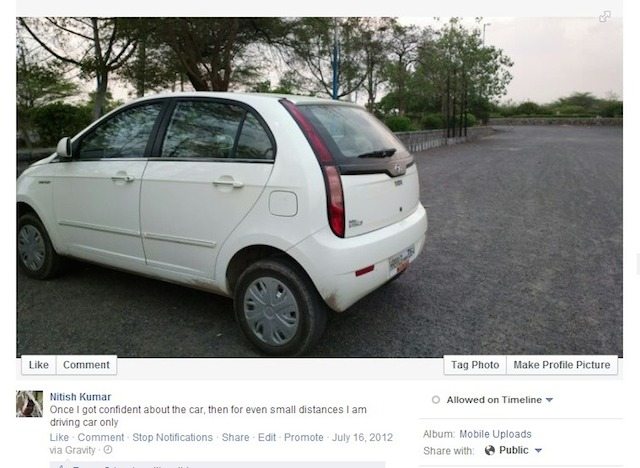 The first day out of car

After nine months of buying the car, the first big journey of mine was to Jaipur from Delhi at around March 29, 2013 and then next big journey was to Vrindavan by November 30, 2013 covering Taj Expressway at peak speed. Then the main confidence building journey was drive to Dehradun-Mussorie-Kempty Falls by January 26, 2014. In short, I was prepared. 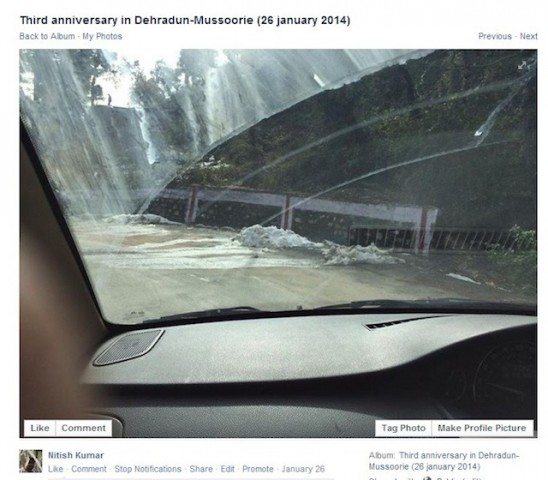 My first encounter with snow in Mussorie

After covering somewhat narrow routes to Kempty falls, I was confident that roads or traffic or hills shouldn’t pose any big issue to me as route to Manali considered to be in better shape than other hills. But longer route & no one else with me with apart from wife and 2 years kiddo means I needed to rethink from scratch over things that mattered for the long drive.

Clothes, Photography, Music, Routes, POIs, Schedules, Food, Snacks, Cost Calculations, Workarounds for schedule overruns, Health, Car Conditions… a number of things come to mind when you plan a trip like this to balance out thrills, surprises with minimized setbacks. Same time, number of purchases and advance bookings. We booked a Budget hotel for two days while two car chargers (Vista has two charging points), snacks etc been arranged though confusion on route continued till even day zero.

As our plan was to reach Chandigarh by Friday night and then to leave to Manali as early as possible from there, there were three possible main routes available to us: Direct National Highway 21 route via Bilaspur, State Highway route via Ghaghas or the ultra longer one that was Nangal – Una route. Too many experts, too much confusion… Reviews gave shout out that Main route has to be avoided at any cost due to maddening rush of trucks due to many cement factories on that route while Ghaghas route was told be narrower and winding. Question was can this be managed or longer Una route is only solution? I was leaned towards the longer route due to temptation of having a look over Bhakra-Nangal Dam, about which I read since primary education days. Even then confusion continued till last due to many in office suggesting the main route only saying its still manageable than stretching for longer route.

The Car was fine & was serviced roughly 6000 km before (one or more month), but I decided to pay for a routine check, if anything wrong or needed to be taken care of. Nothing came out and car was perfectly ready for the trip as per service center. Then on music part, for first time, I preferred CD in place of usual Pen drive as in last journeys, I noticed that it was used to restart again and again due to bumps while CD wasn’t supposed to pose this issue with Indica Vista’s slot-loading Music player. Camera part was supposed to be taken care by majorly Gionee Elife S5.5 then iPhone 5S and Sony 16 MP Cam, along with Nexus 4 for 360 Degree Panorama shots (which came out to be biggest downer as it didn’t worked for a single shot).

So finally the day came… but as usual, things don’t always go with the plans. First usually punctual TaxiForSure driver, whom I assigned the job of bringing the wife from apartment to my office in Connaught Place to start the journey took a wrong route as per his GPS delaying the journey at least by an hour. Rather than planned 3.30 PM max, we could start by 4.30 PM around. Leave the troubles I went through due to waiting in the heat of Delhi noon.
Anyway, got the tank full, air pressure checked, journey begins for the first stop to be taken to Chandigarh. First hurdle was outer ring road traffic. Man! what the hell authorities have made out of the otherwise better infrastructure. Too many speed breakers causing complete standstill in entire stretch. Why to make a six lane road if you want to put speed breakers on like each 300mtr? Then those vehicles for whom the speed breakers looked like some such high one that they would drop their speeds to zero & then would cross in first gear. Well done….

Me at driving seat

It was fun ride post that once I was out of Delhi. Cruised through Murthal, Karnal etc as was in no mood of any snacks in between. Priority was to reach Chandigarh as early as possible and then sleep tight till night so that could start by 3AM without troubles. But plans are… just plans. Took first break at some Pummy Dhaba to take some Aloo Paranthas.

Spotted a big Gionee hoarding on a side. Interesting!!!! The new brand is reaching out very well. 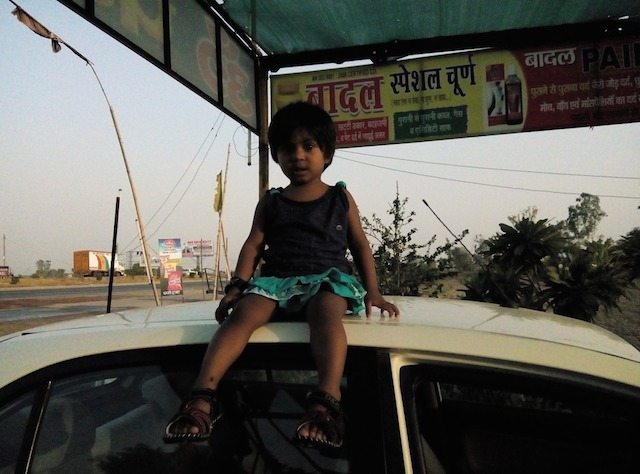 Kiddo at eating joint in way to Chandigarh

Here I must give a special mention to Sygic, which I happened to have in my Nexus 4 thanks to the free short time offer for Android. Nokia E52 had left me a car holder which was coming super handy right now and Sygic while having its limitations was a perfect thing about knowing where are the speed traps, when I am going higher than allowed speed. Also There must be some interesting settings to hold battery life as well as it was amazing for me that how phone holding for hours even if in charging via car while Google maps kill it within two hours straight from 100% to 0%. Definitely was a near perfect experience about navigation for the first time (provided you are going through main routes than workarounds). 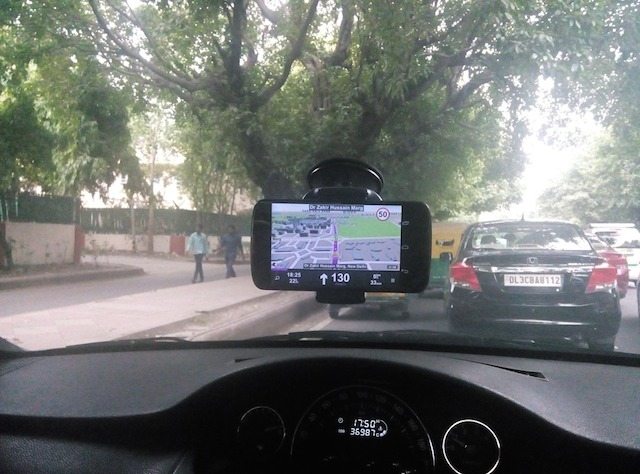 Sygic – Sure a lifesaver despite of limitation

Can’t blame roads, but may be cautious driving of mine or the fear of infamous Chandigarh traffic cops, didn’t allow us to reach Chandigarh before 10:30 PM, specially because of in-city Ambala-Chandigarh stretch and then…. it happened. My friend happened to give me address of IT park only, than exact location of his stay, which came out to be THE blunder. After negotiating the routes in first time visit of Chandigarh, reached to home by somewhat 11:45 PM. The plan of resting for a while was officially spoiled.

Somehow I managed to sneak in for say one hour of sleep after taking the national food that was Maggie and then despite of apprehensions, came out of building by 3AM. The place had a very narrow street, where I managed to park my car somehow, so pulling it out was same challenging task. Took a few mins and post that I guess good bye etc… and I was on roads by 3.30 AM.

The first leg of the drive to Manali: Delhi to Chandigarh was last modified: November 12th, 2021 by Nitish Kumar

In Indian mythology Lord Hanuman is designated as the god of Kaliyuga, the era in which we are living in, and which is considered…