Walking down the narrow alleys of Stone Town, Karibu (Welcome in Swahili) is a word you hear frequently, as shopkeepers invite you to visit their stores displaying an array of souvenirs. The heart of Stone Town mostly consists of a maze of narrow alleys lined by houses, shops, lively bazaars and mosques. It is best explored by foot and getting lost is part of the experience! 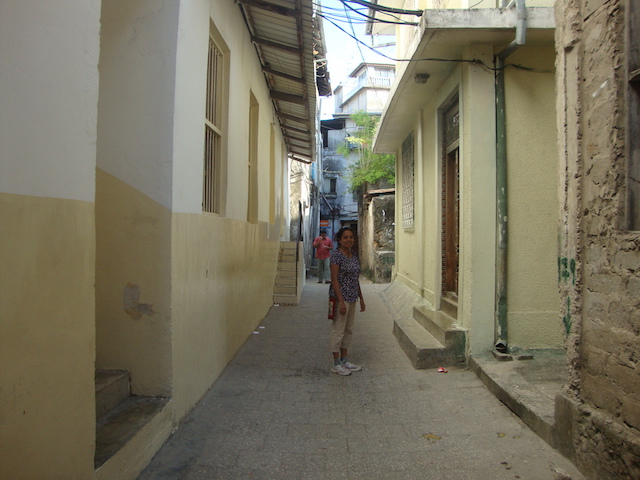 Walking through the narrow streets

This is the cultural heart of the island of Zanzibar and has an ancient feel to it. In the 19th and 20th century these houses were constructed using coral stone taken from the sea, hence the name Stone Town. For this reason, the town has been included in UNESCO’s World Heritage Sites.

Many of the buildings are crumbling down, which isn’t surprising considering their age and the weathering effects of the coastal climate. Zanzibar was once ruled by Oman and remnants of the Arab influence can be seen in the architecture. 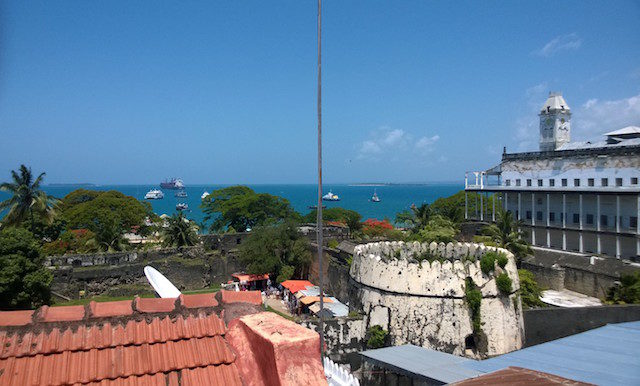 House of Wonders on the far right

I started my walk at the House of Wonders.

As the name suggests, it is the tallest and largest building in Stone Town and is a landmark structure along the seafront. If you’re arriving in Stone Town by ferry, the clock tower can be seen as you approach the town. The story goes that the House of Wonders was given its name because it was the first house in Zanzibar to have electricity, running water and an elevator.

I am told that this was built by Sultan Barghash as a ceremonial palace in 1883. The massive door at the entrance is said to have been built wide enough for the Sultan to pass through on an elephant. As of now, I can only look at it from a distance, as the building has been closed for renovation for a while and there’s no telling when it will be completed.

Making my way along the narrow alleys, around every turn in Stone Town I come across these giant wooden masterpieces, the doors of Zanzibar. Traditionally, the door was the first structure to be erected when a house was being built and in the past, they served as a valuable glimpse into the home-owner’s place of origin, profession and economic status.

Some have elaborate carvings and are a reminder of Zanzibar’s affluent past. Today, while many of the houses seem to be falling apart, the doors still stand strong reminding you of a bygone era. 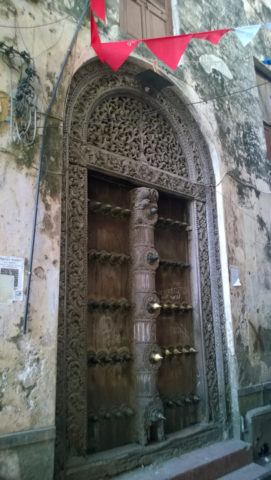 The lanes are narrow and while taking in the sights you also need to keep a watch out for -bikes, cycles, hand carts and the dirty water that gets thrown into the alleys when shopkeepers finish cleaning their shops!

To market, to market

The sun was already high up in the sky and it was time for a Madafu (tender coconut in Swahili) break. Well, the coconuts taste the same as those in India but, the difference lies in the art of cutting it. Here, the top of the tender coconut is cut such that you can drink the water without using a straw or spilling it down your neck. The locals as you can see are pretty skillful with the knife! 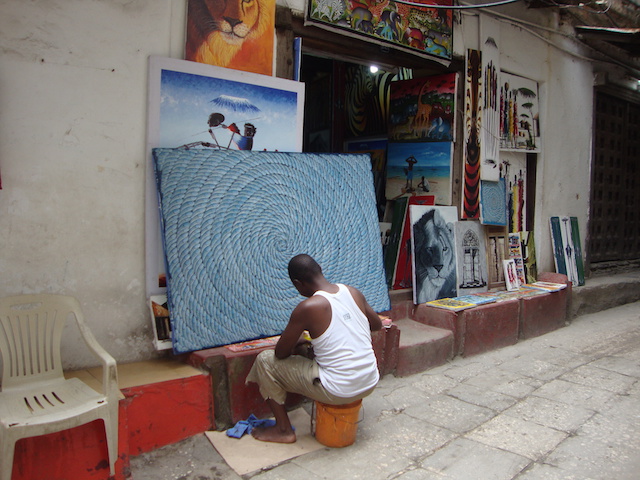 Further down the street, I stop to watch a Tinga Tinga painter. His trained hand moves steadily as he paints fish in a circular pattern on his canvas. Strolling through the streets, you will find several shops along the alleys catering both to the locals and tourists.

There are plenty of shops to distract you, selling an assortment of souvenirs like, boxes craved in wood, baskets and mats woven with palm leaves, jewelry, antiques and spices. While shopping keep in mind that you have to bargain! 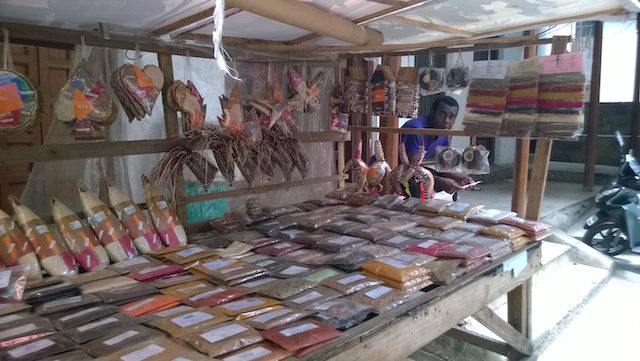 Making my way through the labyrinth of Stone Town, I stop by the Zanzibar Coffee House, the aroma of authentic brewed coffee makes you want to try out their Café. Having heard that East African coffee is some of the finest in the world, I stop by for a cappuccino, it turns out to be the best I’ve tasted in the town.

Stone Town is sometimes referred to as a cultural melting pot of African, Indian and Arabic influences. While Islam is the dominant religion, the town is also dotted with churches and temples. So it wasn’t surprising to stumble upon `Joshi’s’ a vegetarian restaurant where I had my first taste of Urojo. Also known as Zanzibar mix, it’s an Indian inspired Zanzibari Tanzanian bowl of curry soup with lots of toppings. It’s packed with diverse flavors and textures.

The ‘Mix’ is a bowl of smooth and tangy soup cooked with lemon and mango, with pieces of mashed potatoes, onions slices, peanuts and crispy bhajias immersed in it. It’s topped with a spoon of coconut chutney, a dash of red-hot chutney and a scoop of deep fried potato shavings sprinkled on top. 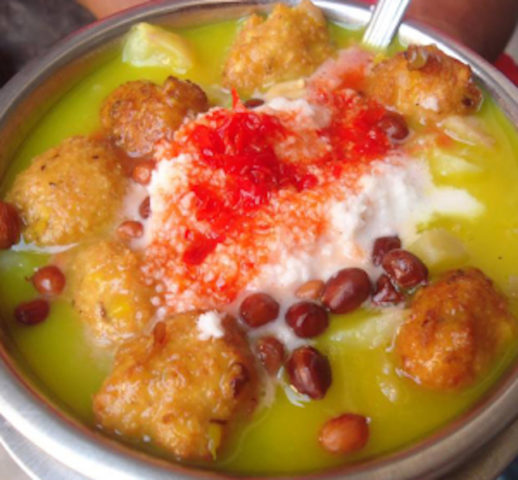 Just outside the narrow lanes of Stone Town is the lively Darajani Market. It’s a vibrant atmosphere where food supplies and ingredients from around the island are traded and sold. Here you find everything from spices, shoes, live chickens and fish to mobile phones and other accessories.

Close to Darajani, is the former Slave Market Site. Although nothing remains of the slave market today, it’s one of the physical reminders of Zanzibar’s dark history in the slave trade.

As I walk down to the underground chambers it is a sobering reminder of the not so distant past. The underground cellars were used as holding pens for the slaves, before they were brought up to be sold on the `market day’. They are dark, airless with low ceilings and have examples of chains bolted to concrete that had been used to tether the slaves. 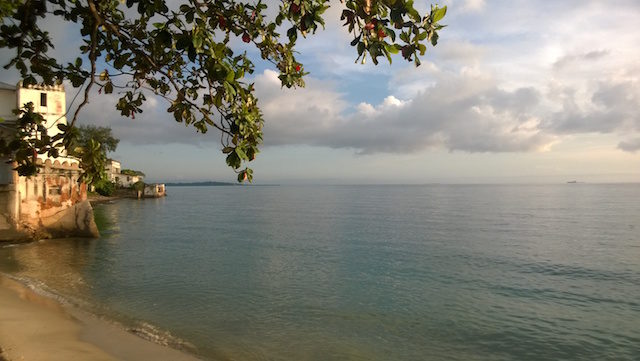 The narrow alleys eventually lead you to the water front. My favorite part of the town is the water front. I make my way towards Forodhani Gardens, which is a popular night food market offering Swahili seafood cuisine and the famous Zanzibar Pizza.

Stalls named `Mr. Chocolate’ or `Mr. Sweet’ sell a variety of sweet and savory pizza’s. This nowhere resembles the `regular pizza’. It tastes more like a combination of an omelet and a pancake with a filling of your choice. I recommend every visitor try this unique native dish! 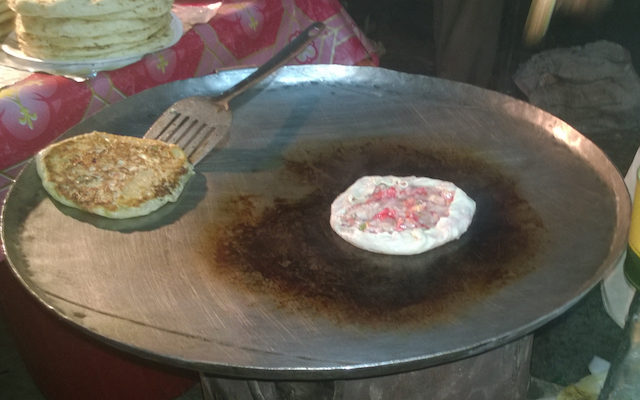 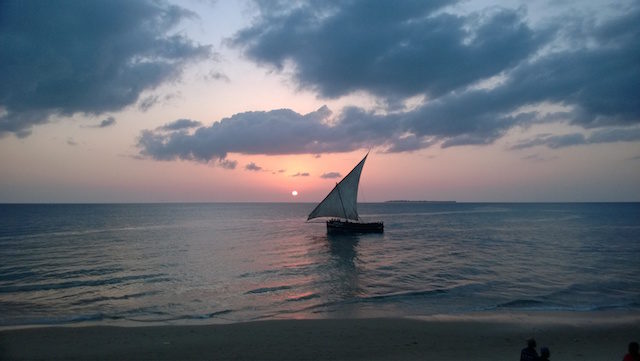 Stone Town being on the western coast of the island gives you spectacular views of the sunset skies over the Indian Ocean. As sunset approaches, every tourist finds a place to sit down to watch this spectacle. Sitting on the terrace of the Africa House, I watch the sun set into the Ocean. Another day comes to an end on the Island of Zanzibar.

Zanzibar: How to explore Stone Town on foot was last modified: June 27th, 2022 by Sharada

When I get the opportunity to travel, I take it! Blogging is one way of capturing my travel experiences and sharing them. Each place reveals new experiences and intriguing cultures to be explored. Here's looking forward to many more journeys.

It is my favorite time of the year for more reasons than one. Winter is exiting while the long awaited spring is just setting…