Historical sites often reflect the richness of a society’s culture. India is blessed with numerous well-preserved historical sites that can transport its visitors through time and allow them to tread the very path that was frequented by Kings, Emperors and the ancient monks. One such historical place is Aurangabad. The known history dates back to 2nd century when the Ajanta caves were chiselled through the hills. The city itself got its name from Mughal Emperor Aurangzeb.

We landed at Aurangabad in the 1st week of November. During peak summer, the mercury goes well beyond 40 degrees. It left me wondering why any emperor wants to build his palace here or for that matter why the mendicants wants to practice their religion under the merciless sun? We reached Aurangabad around noon after a pleasant bus journey of 5 hours from Pune. In some section of the Pune-Ahmednagar-Aurangabad route, you will come across tall windmills with its giant rotors silently generating the much-needed clean energy. 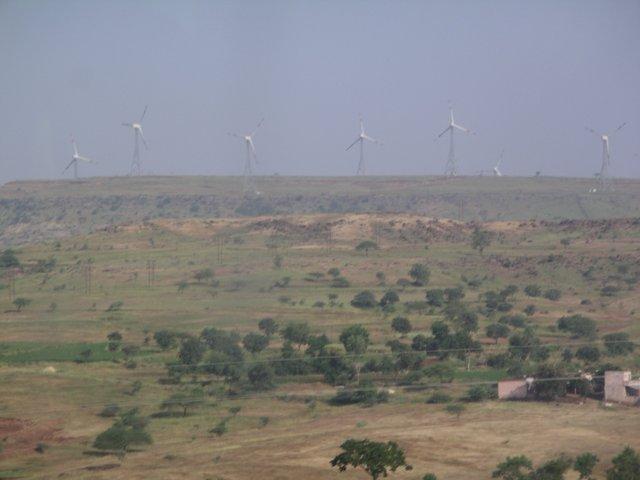 Aurangabad is a typical reflection of Indian uniqueness – a melting pot – of culture – a place since ancient times where people were free to experiment different religious thoughts – many that would catch the imagination of the world; a place where the invaders came and melted in the society leaving their architectural footprints and embracing the warmth and practices of the natives. This acceptability, adaptability, tolerance and embracement of other cultures is what defines India and probably is also the secret to its survival over 5000 years – through turbulent times of history. In a way, you can sense this as you travel through this ancient city. 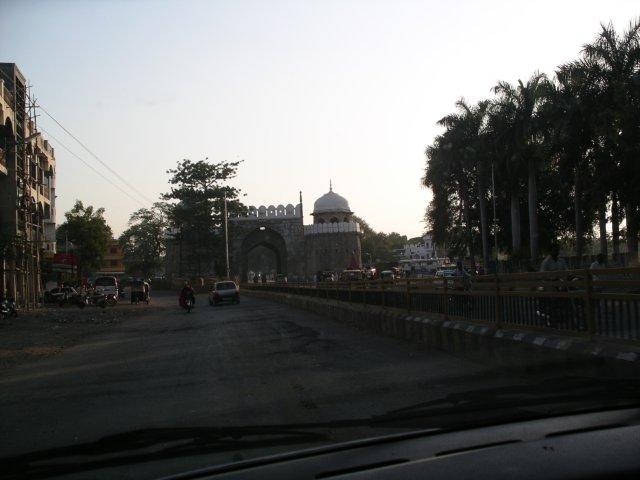 When we arrived at Aurangabad, auto drivers hounded us. The auto driver who dropped us at the hotel was an enterprising chap. He insisted that we would need a vehicle and suggested his cousin who runs a tourist business. It really worked well for us and I engaged him for the reminder of the tour. We checked in at Ira Executive, a decent hotel with the expected comfort. I had booked this hotel through Travelguru and like all my other bookings through this website, my experience has been above par.

Ajanta Caves
Ajanta caves are approximately 100 kms from Aurangabad city and the driver advised us to restrict only to this location for the day. The heat was energy sapping and we had to hydrate ourselves constantly. Private vehicles are not permitted beyond a point as you approach the caves. Government plies CNG buses on the hilly route to prevent damages to the caves from vehicular pollution. We reached the top of the hill around noon. As we walked up the steps, we could discern the 29 caves lined on the western face of the hill. It becomes immediately apparent that even at noon the caves are dark. 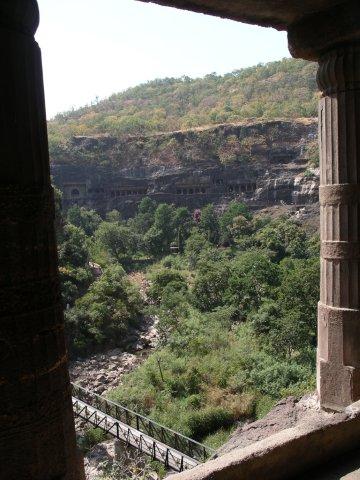 A distant gaze of the past

The only time there would be some light for the masons to work is for few hours in the evening when the sun sets in the west. I could just wonder how in the 2nd century without the aid of electric lamps the monks and masons would have chiselled such magnificent statues. Some of the designs are so intricate … and these are deep within the cave. For what purpose were these built… why in such a remote area amidst the jungle? More questions… but very little answers. As part of the “Incredible India” program, government should establish “Interpretive Centres” near each of the historical sites to improve awareness about the sites, just like the way it is done in the US.
The Ajanta caves are a series of 29 caves with statues of Buddha carved in each of them. Few of the caves are closed for visitors. Restoration work is currently underway with artificial soft lighting that is friendly to the rock surface. The monks during the ancient times used some of the caves as monasteries. 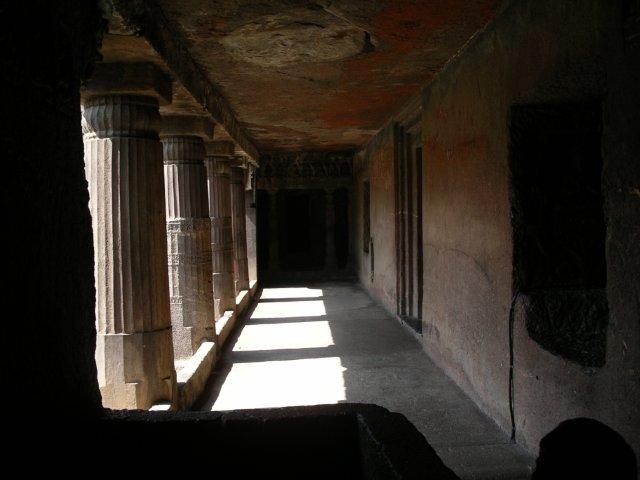 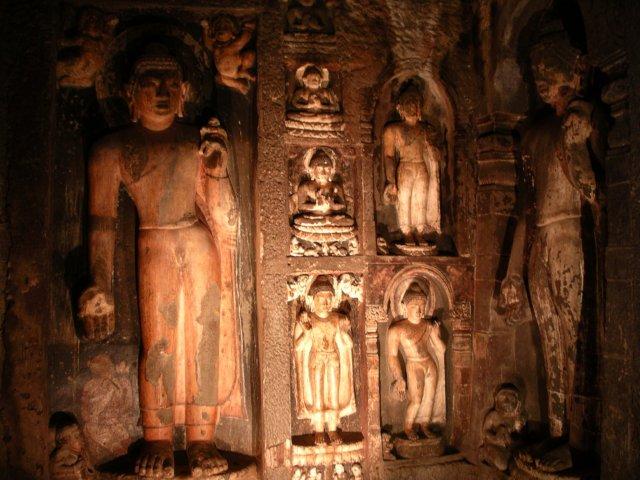 Ellora Caves
The Ellora caves are more recent and were created over a period of several centuries …between 5th to 8th centuries. It is around 30 KMS from Aurangabad. It has 34 caves and is a mix of Hindu, Buddhist and Jain architecture. Here you can across multi-storeyed structures and intricate designs on rocks. Carpenter cave (Cave 10) is truly amazing as the ceiling looks as if it is made of wooden beams. It is actually solid rock cut to give that feeling. 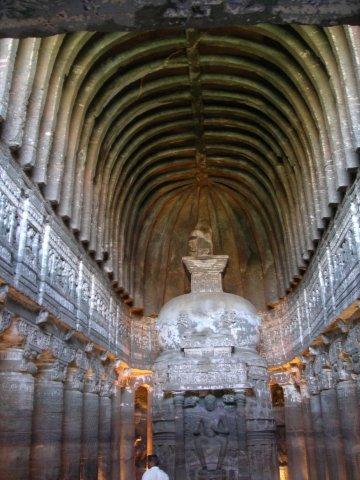 The most splendorous of all is the Kailashnath temple (Cave 16). The temple built out of a single rock … created by cutting a hill from top all the way to the bottom. It is a representation of Mount Kailash. There is multi-storeyed structures with staircase… long running balcony all chiselled out of solid rock! Ramayan is depicted on the walls of the temple. 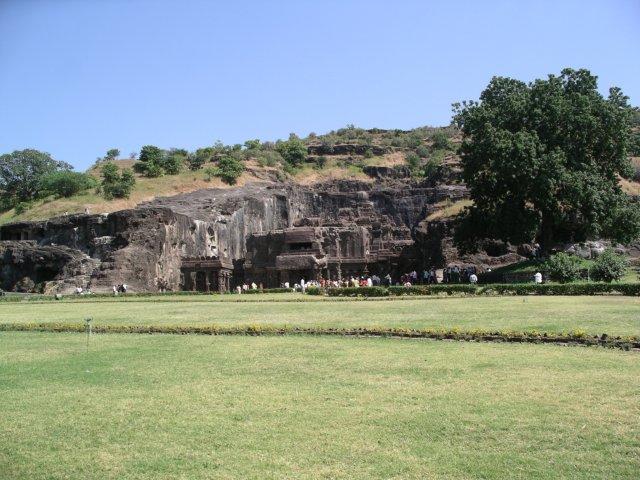 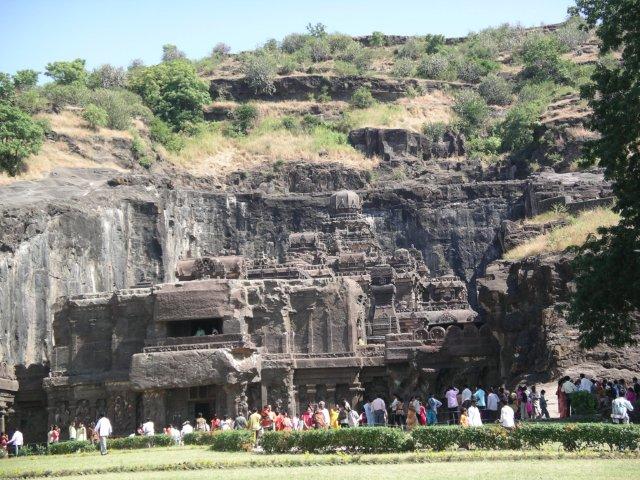 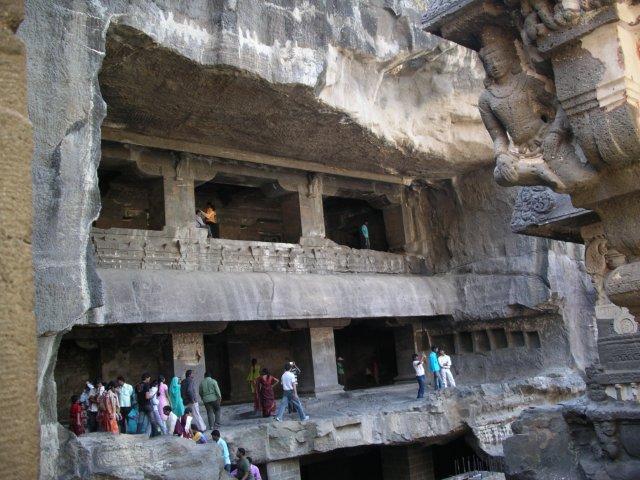 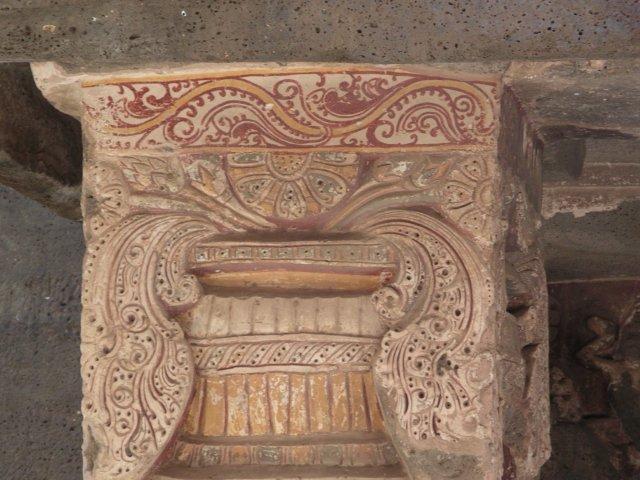 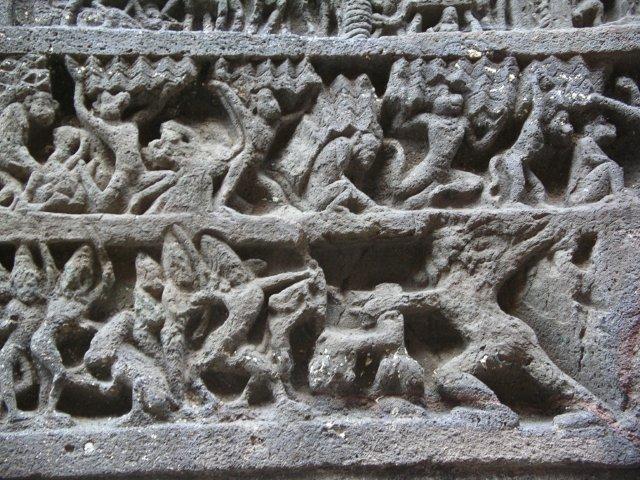 Depiction of Ramayan at Kailashnath 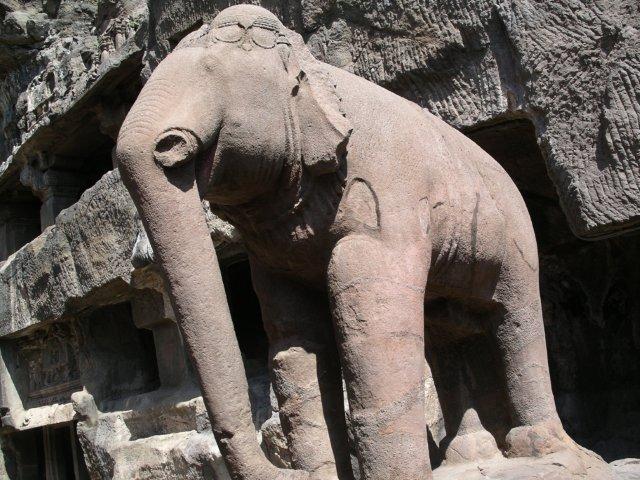 Life size statue of an Elephant at Kailashnath 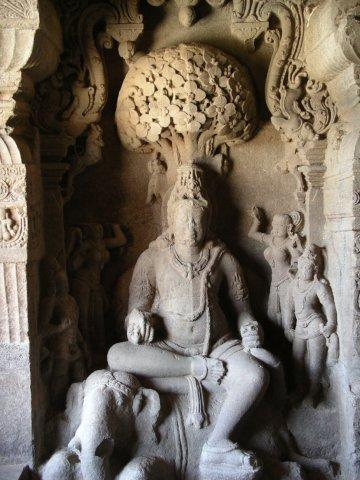 We did not see all the caves as the heat got better of us. We just managed to see the more popular ones before heading back to see other attractions at Aurangabad. Bibi ka Maqbara was our next stop.

Bibi ka Maqbara – Poor Man’s Taj Mahal
Bibi ka Maqbra was built by Azam Shah (son of Aurangzeb), in the memory of his mother in the 17th century. From afar, it reminds one of the Taj Mahal but the comparison ends there. To me it seemed as the “skinny” version of the Taj. The beauty of the Taj is its location …with no ugly modern structures behind it …it seems as though the blue sky is the big canvas …with the Taj Mahal painted on it. 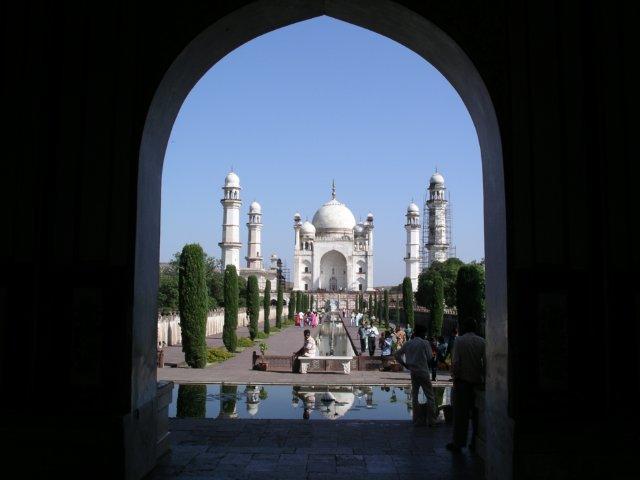 Taj of the Deccan 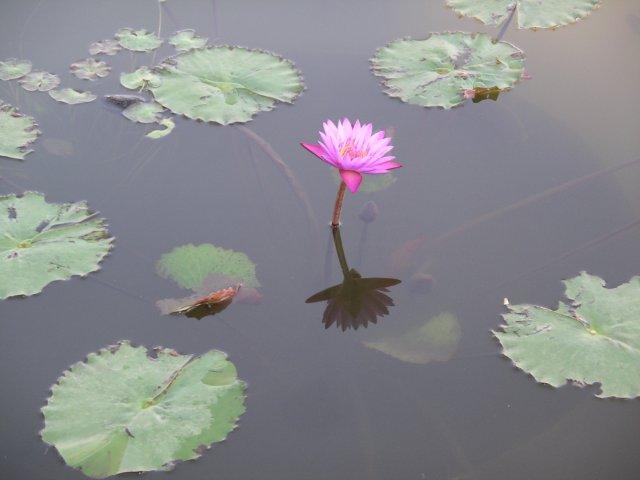 We spent more than our allocated time at Bibi ka Maqbara and had to rush to Daulatabad.

Daulatabad
Daulatabad is a 14th century fort city located 16 kms from Aurangabad. By the time we reached Daulatabad, we were fatigued. It was getting late as well and we could not have taken a tour with the limited time at our disposal. The open museum here is worth a visit. We just took a quick tour and headed back to our hotel. 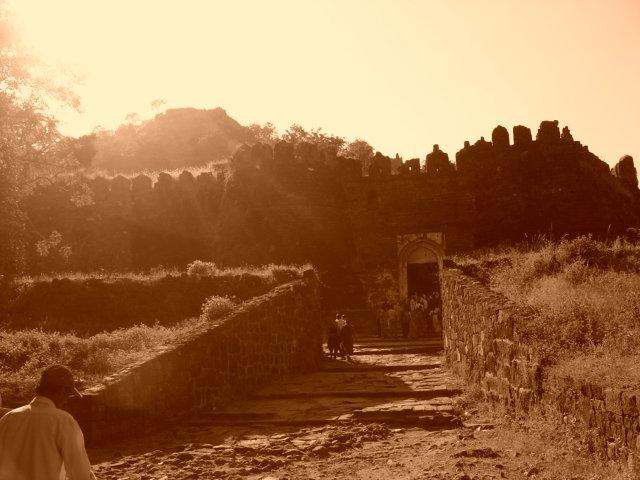 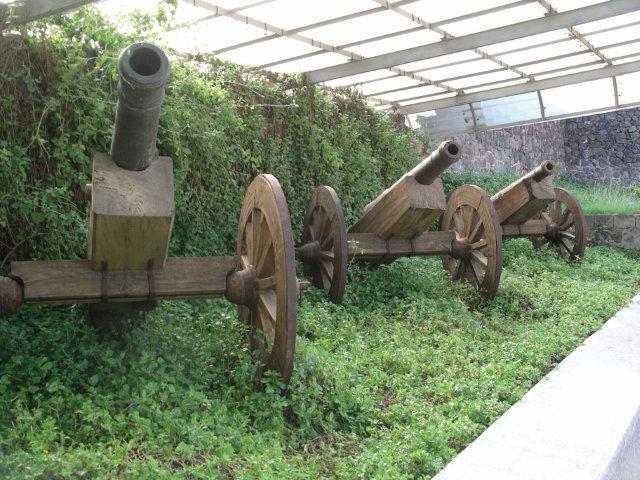 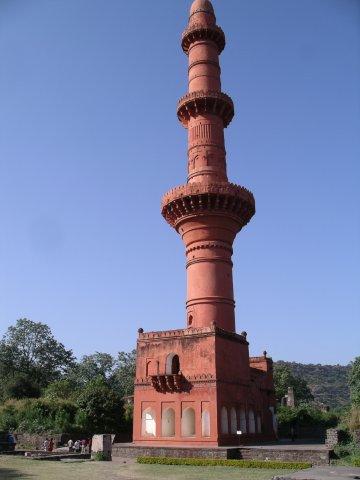 If you love Rajasthani food, I would suggest Bhoj restaurant near Siddharth Garden and Zoo. The food was very good but too oily and spicy for my taste.

I would definitely recommend the Siddharth garden. The garden is well maintained and the little zoo tucked away in a corner is its little secret. I was surprised to see a white Bengal tiger here. There are numerous Samber and Nilgais (Blue Bull). The tiny snake farm is also good but has only few species. The garden itself is interesting. Some innovative guys have created art out of broken trunks. 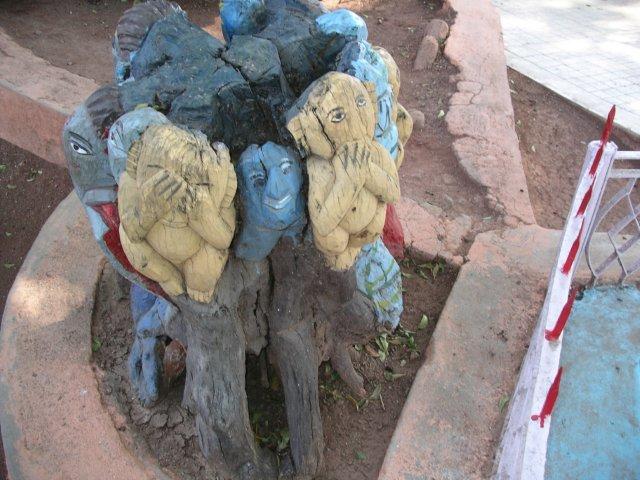 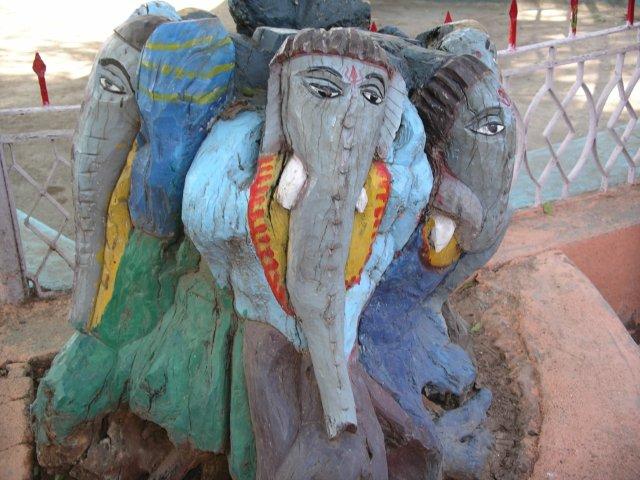 Paithan
On the last day, we visited another ancient city… Paithan around 56 kms from Aurangabad. This city was the capital of Satavahana Empire in the 2nd Century, though it is now more famous as the home of the saint Eknath. The city is also famous for its Silk Sarees – the Paithanis. The Jaikwadi dam is located here. The garden around the dam is enormous.

As we ended the whirlwind tour of the city, we traversed through many centuries, walked over the footprints of Buddhist, Jain monks and Hindu saints. We treaded the same path as that of emperors and ancient kings and the commoners and could only look at awe at the timeless masterpieces. I just hope the senseless modernization does not bulldoze these ancient structures but leave it for future generations to wonder and ponder about our ancestors.

The famous temple of Somnath is situated in western India located on the Arabian Sea coast of Gujarat. It is believed that between Antarctica…