So the day finally came off to say good bye to this beautiful city. With a heartfelt remorse we had to bid adieu and move forward. Iwent to meet the owner of the hotel who was gem of a person. On the first day of my stay in the hotel when I asked him the advance I should pay , his answer surprised me (main advance nahin leta) so much trust had won my heart. I cleared my dues and staff of hotel helped in putting the luggage in the car( an ardous task considering the baggage we people had). We had our routine breakfast of poha and dhokla. Here our car was on the way to Chittorgarh now. Journey was quite good and we reached Chittorgarh at about 11.30A.M 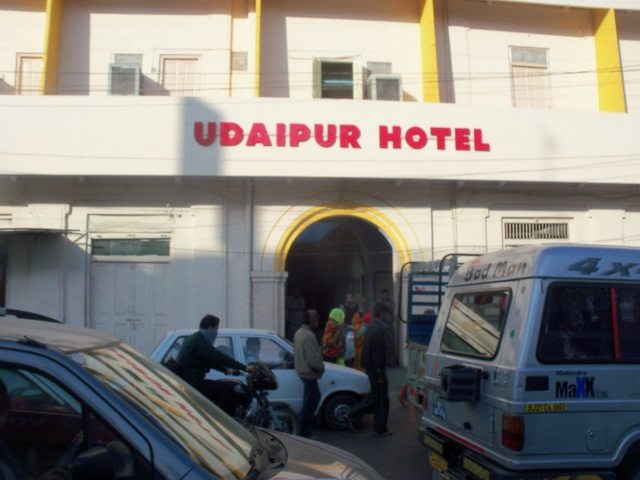 CHITTORGARH:
Though I had visited the city a long time ago, I had only fade memories of the massive fort considered once upon a time to be impregnable.Chittor seemed to me as not so clean town and unplanned in a haphazard way, quite contrast to Udaipur. After entering the town I had to ask the way to the fort from passerbys quite a few time. At last we reached the fort , entered the complex and stopped my car at ticket counter. My first enquiry was whether we can roam about in the fort in car or we had to go on foot. The answer relieved me Yeah it was in car.hahahaha……First monument that we came face to face inside the complex was that of Kumbha’s palace.

This was the place of erstwhile Maharanas of Mewar before Udaipur was founded due to paucity of water in this area, it is said. The palace consisted of underground cellars where Rani Padmini is said to have performed Jauhar Pratha. Roaming in this massive monument gave me a nostalgic feel and I also thought about the flimsiness of life

The place also reminded me of the song NAAM GUM JAYEGA though I know that the song was picturised in the ruins of Mandu. But at some point all the ruins tell a similar story 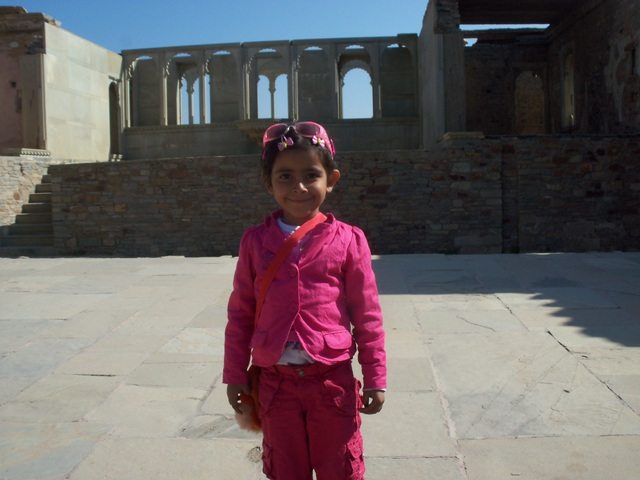 I also remembered the song KAANTON SE KHEENCH KE YE AANCHAL… AAJ FIR JEENE KI TAMANNA HAI….. As this was the place where this beutiful song was picturised on Waheeda Ji. Both the song and this monument representing and symbolizing the expression of freedom. After spending a nice and quite time there we came to the next monument, MEERA MANDIR. 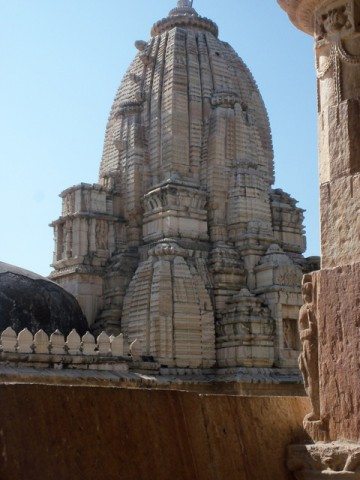 The only Meera Mandir

This is the only temple in the world said to be dedicated to that great saint poetess of Bhakti era, Meera Bai. A very serene atmosphere welcomed us . The temple is a monolithic structure in greyish sandstone resembling the rock cut temples of medieval era. We paid our salutations to the great lady who has come to symbolise the pure love.Bhakti as usual was clicking the pictures and Pavani was enjoying the stroll in the courtyard 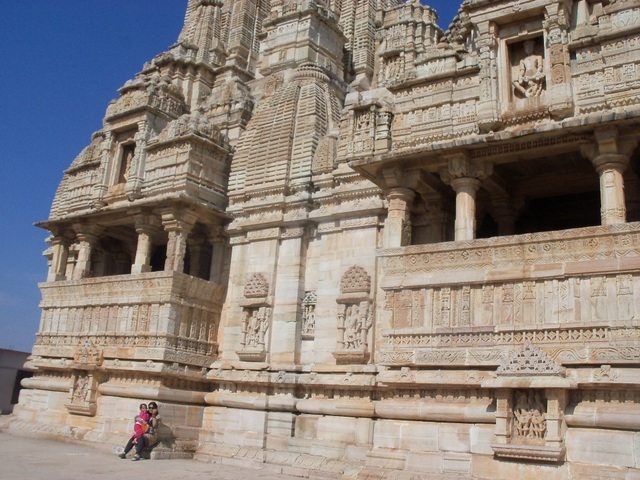 Bhakti and Pavni at Meera Mandir

VIJAY STAMBH: A very popular monument in the fort complex, the tower was built by Rana Kumbha after winning the areas of Malwa and Gujarat. The tower is situated amidst beautiful lawns and from here you can have a splendid view of Chittorgarh. The day we were there, a trip from some government school was also there comprising the curious students.

We were permitted to go up to last storey of the tower ( 9 storeys). Bhakti and Pavani declined the offer but me and Savita grabbed upon it but after reaching the 3 storeys we could not face the congested small stairways and darkness so decided to come down. Bhakti and Pavani were busy in the small garden playing. I came to know that nearby a pond existed along with an ancient temple. The lure of fish to be shown to little Pavani got better of me but I could not muster enough courage to go down almost 100 stairs so no Piscean treat for Pavani and came back. Had some snacks outside the monument and got ready for the next monument, FATEHPRAKASH MAHAL. 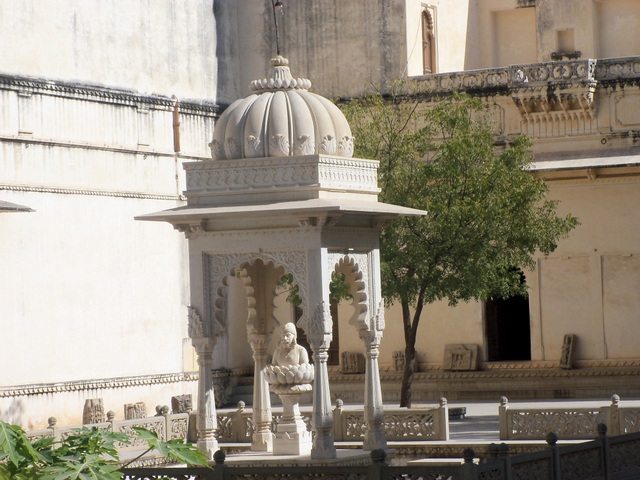 As it is with all the museums these are same in some respect and dissimilar in some other aspects, same was here. The museum is located within an open space where photographers , chana sellers were roaming . We bought the tickets and entered the complex. The museum is not that large nor it is too small.The highlight of the museum in my opinion is the display of varios kinds of armoury of medieval period and the dresses that the soldiers wore in the battlefields in that era. Different types of daggers, guns, spears , swords are on display here showing the true valour of Rajputs. Overall we had a nice time there. 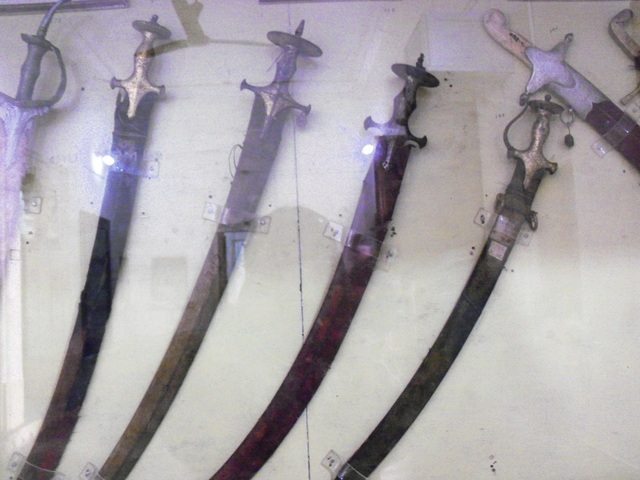 RANI PADMINI’S PALACE:
The palace of Rani Padmini has been converted into a small garden ( most of it) with rose saplings. Perhaps the authority wants to equate the feminine grace of Rani with flowers otherwise I could not find any other reason.When you look down from the ruins of this palace , you find a barren land(with a hint of grassland in between) all around it with the locals busy with cattle grazing and other sundrey activities. Numerous jharokhas adorned this building. 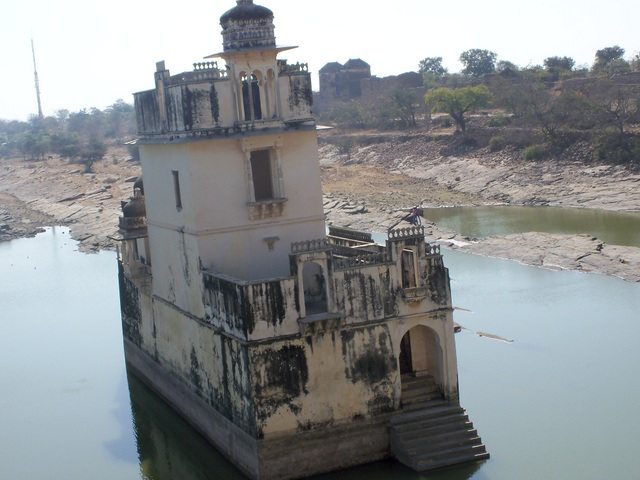 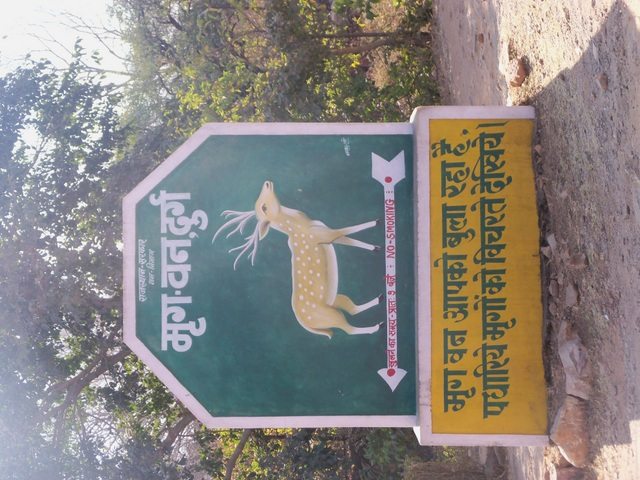 A signboard was there indicating a deer park about 3 km away on that road but I saw no tourist vehicle going in that direction. Shayad koi deer dikh jaye…. This thinking overpowered us and I drove in that direction. Aakashvani regional centre of Chittorgarh was on this way. At last reached the deer park which is under the forest deptt. A security guard cum ticket clerk was sitiing there. I enquired from him whether we could could spot any deer there. He said, sheer luck. The road inside the park was a forest tract, rocky and very narrow. I was worried about my car going on this tract, if any fault comes. I again bothered him and asked whether it was safe going in car or on foot. He gave a look at my car…. hmmm Maruti 800.. chhoti gadi hai… aaram se jana padega. I dropped the idea and started journey along with my family members on foot. He intercepted with the advice… THAK JAOGE SAAHIB…. CAR LE JAO… and drew a rough map for me up to the point I could go slowly and safely. Oh dear and deer everything for you so we all sat inside the car and started our baby step drive. And reached the last point and landmark that the guard had suggested , (BADA IMLI KA PED). parked the car but sorry folks , no deer. Got out of the car for 5 minutes. DOOR EK SADAK NAZAR AA RAHI THI BAS…. 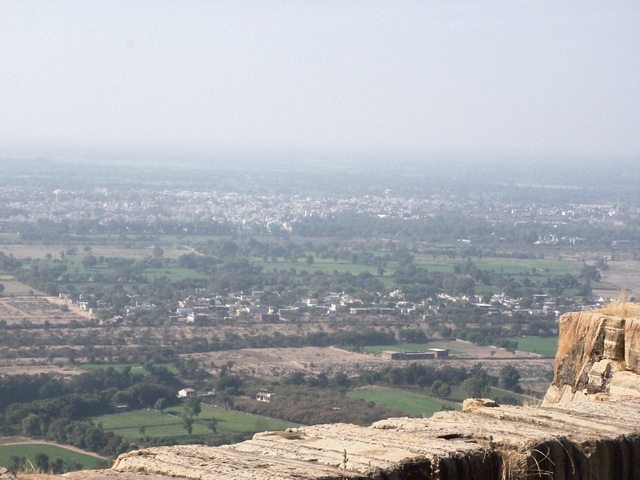 View from the sunset point

No deer ,folks….took the U-turn and came back. So this was the deer park for you.We took another road to exit and saw the monument , KIRTI STAMBH from outside only as well as some other monuments and came out of the fort. BAAKI AGLI BAAR…….

A trip to Mewar – Chittorgarh was last modified: April 26th, 2021 by Rakesh