It was four of us who suddenly decided for a weekend trip to Shimla (15 Feb 2014 till 17 Feb 2014). Me, Siddharth, Anant and Ashwani .We chose mid feb because that week it was rain in Delhi so hoping for some snow out there in Shimla. Earlier the plan was set from Delhi to Narkanda(Day 1), Narkanda to Shimla(Day 2) and finally Shimla to Delhi(Day 3). We booked a cab (Innova) from Gurgaon as we didn’t want to drive so long and get tired and miss the snow fun which was very much expected.

Day 1
All set to go for a fun in Narkanda. We started early at 4:00 AM on 15th Feb 2014 from Gurgaon. It was four of us alongwith one driver. Unfortunately we had a breakdown just before Murthal, Sonepat as our tyre got punctured. After changing the tyre, the journey started again. Then after that we decided for a small parantha and tea break at Sukhdev Da Dhaba at Murthal as it is very famous for its delicious parantha. We halted there for some 20 mins just to had parantha and tea and then moved further. Next destination which we decided was near Chandigarh to have a breakfast. At 9:00 AM we reached Chandigarh where we stopped for breakfast. 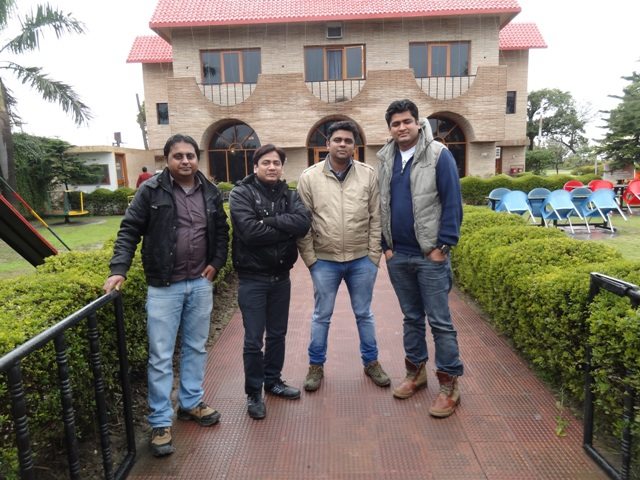 With stomach full we started again. Now everyone is pretty excited as none of my friends were travelled beyond Chandigarh. I told them about the Himalayan Expressway which starts just before Kalka. All of them were very excited. The Zig Zag road started. But it was heavy raining. Our driver told us that it is raining out here so hopefully we will encounter snowfall very soon. After a drive of 2 hrs we stopped just before Solan to had our lunch. It was a small Himachali type local dhaba with Non Veg. The interesting part was they were selling Chicken Aachar and Mutton Aachar, which we had heard for the first time. After a good meal we talked with the Dhaba owner and discussed about the road condition and weather in Shimla and beyond till Narkanda. He told us that it was heavy snowfall in Shimla so we had to stop our journey in Shimla and we wouldn’t be able to drive till Narkanda because of snow. Now the real excitement was started.

Just after crossing Solan we saw a small layer of snow on roads and on top of every car which was coming from Shimla. 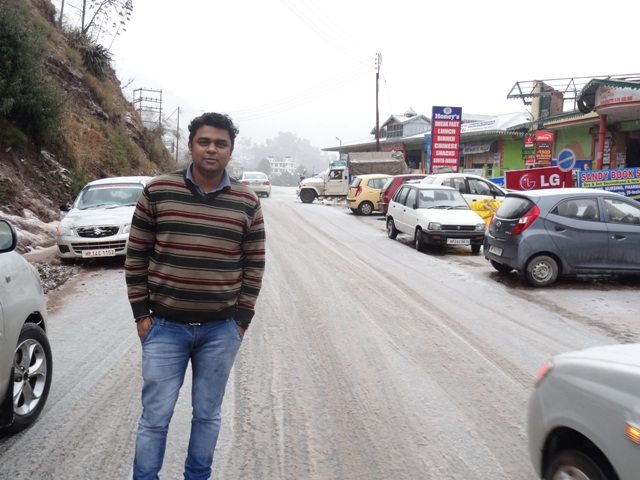 Layer of Snow on Roads

We were enjoying every moment that time because none of us had seen snow in our lives. I don’t had the words to exactly express what we felt that time. It was like a heaven for us. Just before Shimla there was a big traffic jam. No worries, we were enjoying our time playing in snow. By 4:00 PM we finally entered Shimla city. It was all white everywhere. All of us were speechless as everyone was lost in own thoughts. 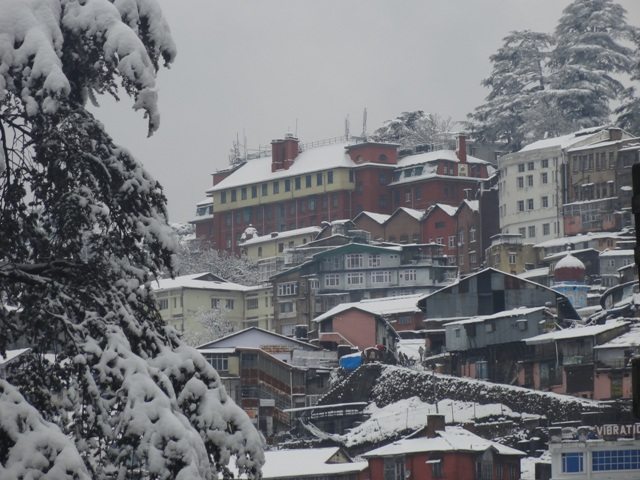 We talked to one of our local friend, who was at Kufri that time, for a hotel. Fortunately we got a decent hotel near Main Church at Ridge. After parking the car near Lift, the trek till our hotel started.

Our booking was done at Woodland Hotel, just 20 mins walking distance from main church at ridge. It was a nice small hotel. They charged us Rs. 700/- per room on twin sharing basis. As soon as we reached hotel, after the pre formalities, we were guided by a hotel guy towards our room. We got both the rooms on second floor. By the time we entered our room, it was dark outside so we missed the evening view of the city as snow was falling outside. I am attaching a pic of our Hotel balcony which shows that it was heavy snowfall outside. 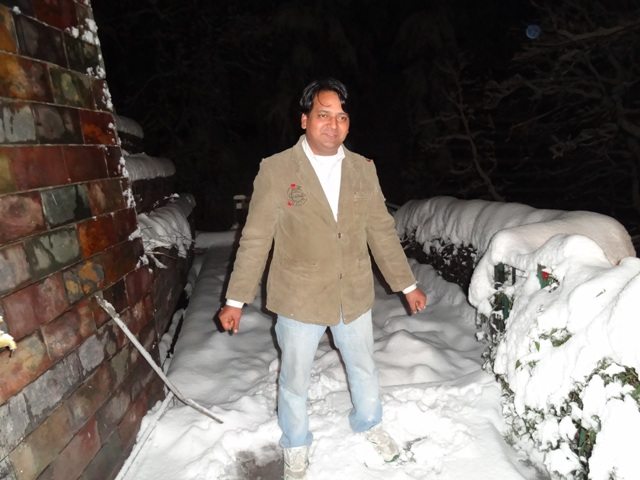 If you go there try to get rooms on second or third floor as the view of the valley was pretty clear from rooms. Rooms were small but cozy. They gave us 2 room heaters and charged us Rs. 150/- per heater per night. During that period of time when the outside temperature was in minus, ofcourse it was very much needed otherwise spending night would had been very difficult. 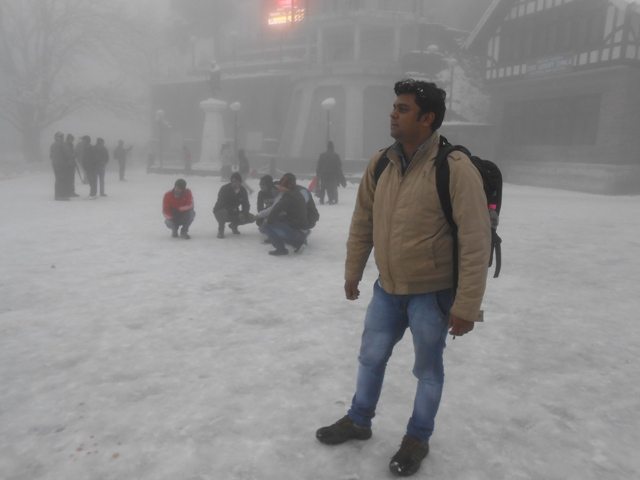 Nothing excitement in that day because we all were already very tired. So after having the dinner we went directly to our bed for a good sleep.

Next morning when we woke up, the view outside our hotel room was awesome. We had our tea and a small walk on balcony of our room just to have a view of Shimla at that time. The only thing which I can say now is White White White everywhere. Now the next problem which we never thought of was that the water in pipes freezed. So we asked hotel manager to have plan B executed in such situation. He told me that he is going to serve warm water in a bucket for each person. That was a good news for us. After getting ready, we checked out of our Hotel and moved till Ridge. It was bright sunny day. When the sun light was reflecting on snow, it was very hard to see anything because it was shining very brightly. After 20 mins of walk we reached Ridge. Good crowed over there as everyone was busy in capturing the moments in their own camera and having fun in snow. We took some pictures out there also as never wanted to miss any single moment. 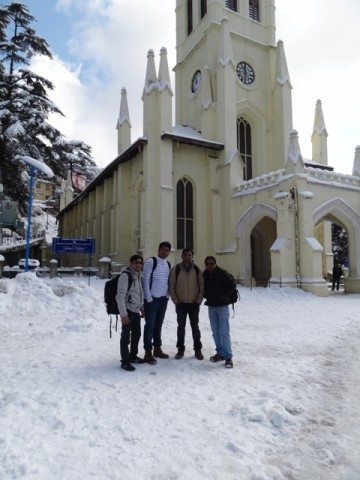 We all in front of main Church 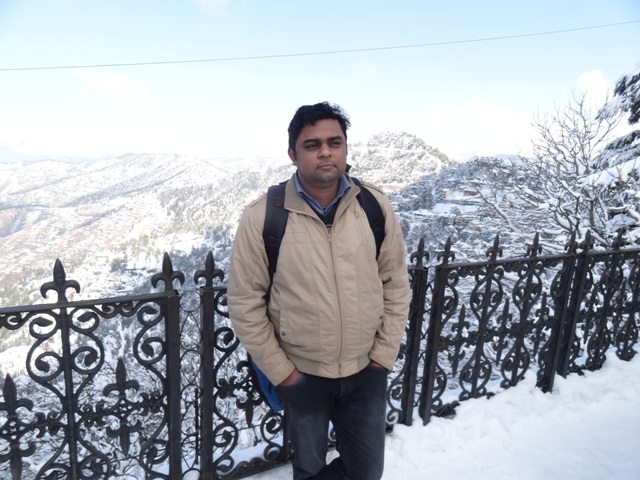 After some clicks we moved further towards The Mall. We found a nice decent restaurant there and decided to had our breakfast. We ordered Chole Bhature and Aalu Parantha along with tea. All the stuffs were pretty tasty. After our breakfast we further moved till our cab which was parked near lift. Finally we reached the parking and got into our cab. After sitting inside the car we thought to drive till Kufri which is like 17-18 kms from Shimla. We all started enjoying the view of the city which was completely white that time. After 8-9 kms drive, we reached at a point where the Innova was unable to move a single inch because of a thick layer of snow on roads. So we decided to find a good place nearby and stop our car. 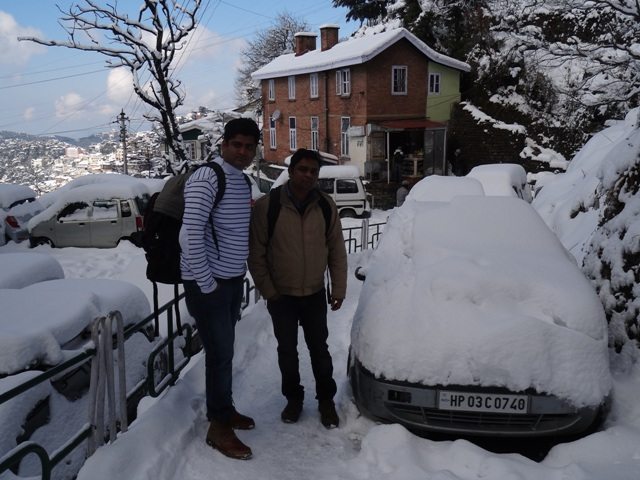 Fortunately we found one place where we parked our car and decided to had a trek and enjoy the nature by walking on snow. One of my friend Anant was very much excited and wanted to made a ice man which we saw in pics of many friends those who had already visited snow areas. He made the ice man and we had some good pics with our ice man. After a wonderful day playing in snow and trekking on snow we decided to go back to Shimla and had lunch. I knew it was bit late for lunch because it was already 5 Pm in evening. As we all were very hungry that time so found a small restaurant near Shimla Railway Station. We order our lunch and had the same. After lunch we again took a walk on Mall Road as we had heard that it was the main attraction for all the tourist coming over there. While roaming on the streets of Shimla, one of our friend was feeling very cold and then we decided to stop our journey here and start our return journey. We left Shimla by 8 pm. The driver was driving very slow because the motor of wiper of his Innova was not working. We reached Chandigarh at 1 am. Had a small break just to had tea and again started towards Delhi. Finally we reached Delhi by 6 am in morning.
So here’s the end of our journey with lots of memories in our mind. 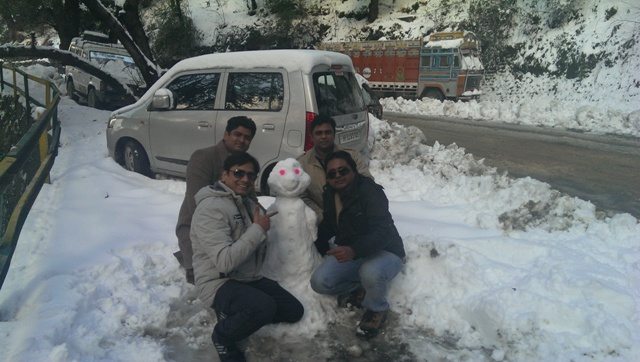 All of us with our Ice man 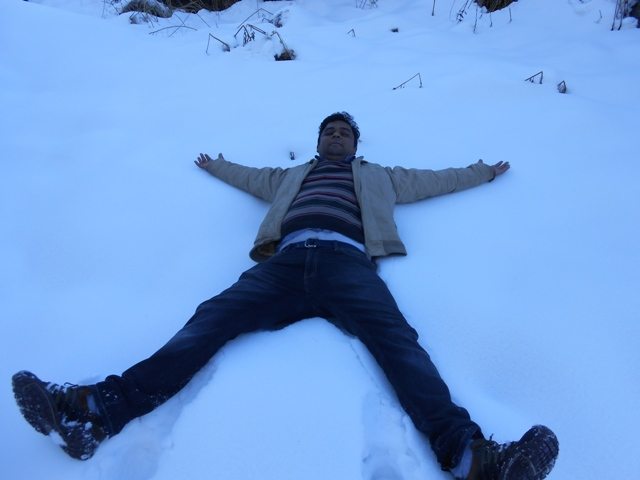 As I am not a professional writer and this is my first travelogue , hope you all will like the same.

I am Abhinav Sinha from New Delhi. By profession I work for a Shipping Company in Gurgaon. I love travelling a lot. Driving is my another passion. I love to cover long distances in my machine. I have traveled and explored a lot of places across India. Travelling and exploring new places always gives me a new high which I try to show in my travelogue.