“At Panchtarni, Lord Shivji left the five elements behind (Earth, Water, Air, Fire and Sky) which make living being. He is the Lord of these elements. Panchtarni is a very beautiful place in the feet of Mount Bhairav. Upon reaching Panjtarni you can see a river split in 5 main parts in the plain. It is said that the five rivers originated from Lord Shiva’s hairs (Jata).

Nights at Panchtarni are very cold and due to cold harsh winds it is strongly recommended that Yatris should carry their quota of Woolens. Cold cream and Vaseline are also very useful for protection of skin. Some Yatris are also affected by deficiency of oxygen. Some may get the feeling of nausea. Dry fruits, sour and sweet eatables like Lemon appear to control these symptoms but it is best to contact the nearest medical post immediately. Lot of Langars and Bhandara are there for pilgrims here till last day.”

So for a re-cap: We reached at Panjtarni before 3PM but due to injuries to Sonu, canceled to proceed towards Holy Cave and decided to spend night here at Panjtarni. We booked a tent and after dinner went for sleep.

As we were tired and so we slept soon. After some time Naresh Saroha wake up and complained of severe headache. We were having some pain killer and gave him one tablet. After some time he again complained. He was not getting relief with tablet and his condition was getting worse with time. He decided to go at Panchtarni medical post. I wake up to accompany him. It was around 2 AM .There was pitch dark outside and no electricity was available at that time, I took my torch and we came out of the tent. (Electricity is available at Sheshnag, Panjtarni and Holy Cave Camps only through generators and they are switched off at around 10PM so the Torch is a must thing to carry with you). After passing through many tents we came on the main path and two big search lights focused on us .We heard a loud noise from security check post-

Next question “what are you doing?

Searched lights were switched off and we went towards check post, one CRPF man came and asked me to stay with them and allowed only Naresh Saroha to go towards Dispensary. I waited there for his return. After 10-15 minutes Naresh cane and we returned to our tent. Due to medicines, Naresh slept soon but I could not sleep after that. In the morning all wake up early and after completing our daily routines, we get ready to start the last day tracking. We took hot tea and Rusk/biscuits in breakfast and started the journey.

Naresh Saroha and Sonu were not well, so we were moving slowly. Then we decided to make two groups. One group will walk fast and after having Darshan will proceed to Baltal and make arrangement for night stay. Second group will come slowly as per convenient and will meet first group in the evening at Barfani Sewa Mandal Bhandara at Domel, Baltal. I, Shushil and Shekhar were in first group so we walked quickly.

Track between Panchtarni and Sangam

Distance between Panjtarni and Holy cave is six kilometer. First KM is simple rocky track. Next two KM is dangerous climb .After the three KM. the Panjtarni track meets the track coming from Baltal side (height of 13500 feet) and hence called Sangam point. Next three KM are either descending or plane track on snow and Glacier.

After Sangam point track took U turn and Glacier started. After 5 minutes crossing Sangam Top, one can have first glimpse of Holy cave, if the weather is clear. We were moving fast towards Holy cave as we wanted to reach Holy cave before the rush increased. Batches from Baltal side (14 KM track) starts reaching at Holy Cave around 9 AM and after that rush increased many folds at Holy cave. As we were moving closer towards Holy cave, the view was becoming clearer. 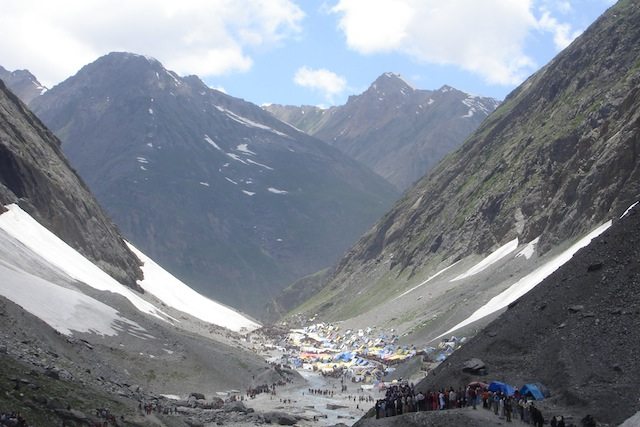 Around 1KM before the holy cave, a market having many shops of Puja and Yatra items for sale starts. Horses and mules are not allowed beyond this point. All the Yatris coming on mules have to walk from here for this last one KM. 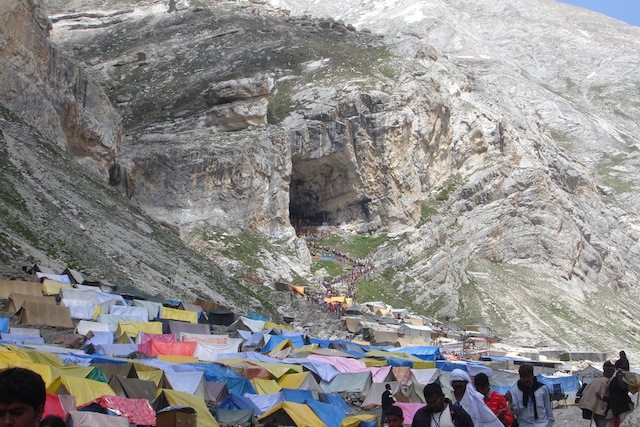 The Holy cave from far

Everything near the holy cave, be it Tents, Shops, Bhandaras or Military Camps all are constructed on the layer of ice above the river. The river was flowing under the foundation of thick layer of ice and at many palaces the Rivers comes in open and again enters under the Glacier. All the shops and tents are temporary constructed for the Yatra period by local Muslims. They called each Yatri as Bhole and keeps on calling “Aao Bhole, Parsad lelo Bhole” ‘We bought Parsad from one such shop and kept our rucksack there. There are no lockers available at Cave. You can keep your luggage for free at shops provided you bought Parsad from them. You can also keep your mobiles and cameras etc. in the shop as they are not allowed in the cave. In turn they give you receipt with shop number, bag number and items written on it. 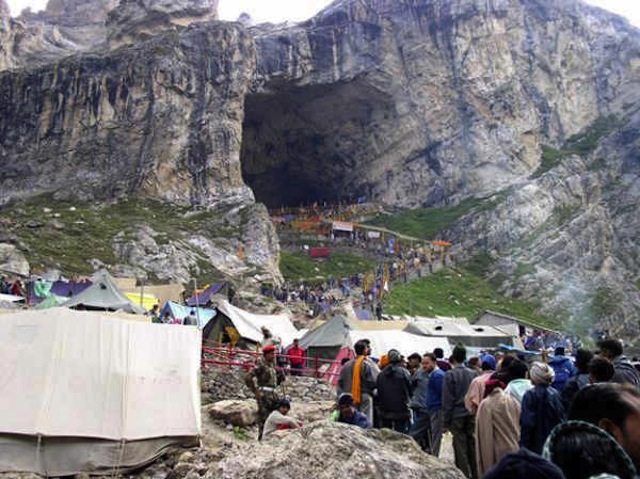 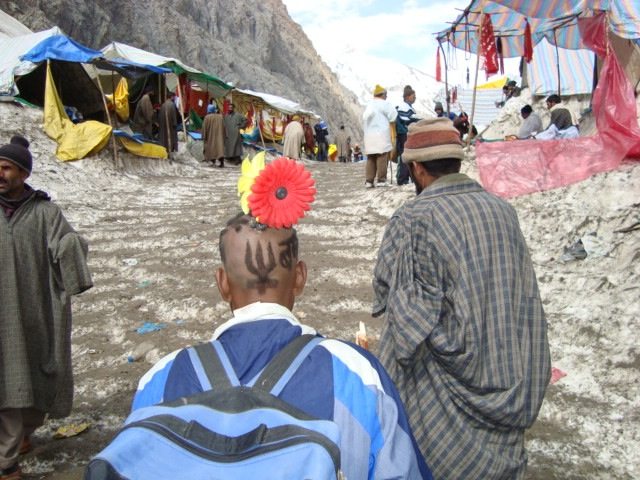 We did not take bath as we were so tired and weather was very cold. We reached near stairs and stood in the line for Darshan. Around 8.30 AM we reached in holy cave .All the atmosphere was filled with the Jaikare of Bam Bam Bhole. We forget all our fatique, tiredness and body pain after reaching in the Holy Cave. We were feeling so energetic. The Holy ice lingam was in front of my eyes. I forget all things and keep staring on icelingam for few minutes. Security personnel asked us to move and we climb down some steps and came on the bigger platform from where we can still have darshan from distance. We spent around 20 more minutes in the Holy cave and offered some rituals. 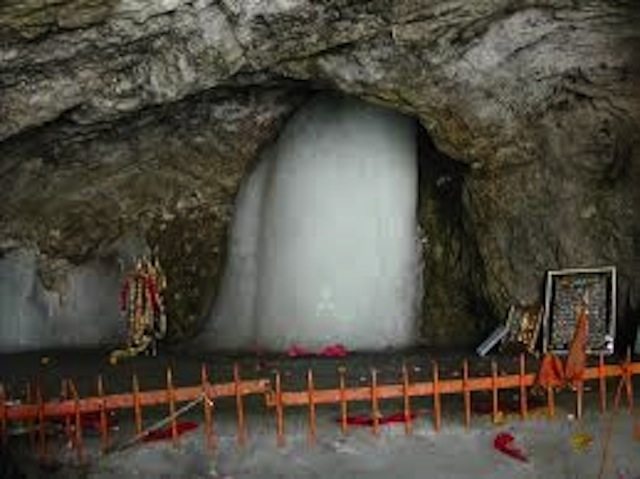 In Hindu mythology, lord Shiva is the destroyer, the lord of all five elements, the ascetic God who meditates on a deer skin. He also wears a garland made of human heads (Mund Mala). Legend has it that Parvati (Shiva’s wife) asked him why he wears the garland of heads. To this he replied that every time Parvati dies, a head gets added to the garland and hence it continues to grow. Parvati then wanted to know the secret of his immortality.

It is believed that Shiva first left behind Nandi (Bull), his vehicle at Pahalgam, hence the name (Bail-Gaon). It is therefore believed that one must walk from Pahalgam onwards as the lord started his yatra here.

At Chandanwadi he left the moon behind (Shiva caries the moon in his hair). Once again, this place takes its name from this legend.

At Sheshnag Shiva left behind the snakes. He left his son Ganesh at the place which is now called as Mahagunas parbat or Ganesh Top.  And at Panchtarani, he left behind the five elements-air, water, fire, sky and earth of which all life is made of (Shiva is the lord of these elements or Panchabootham as they are called).

And finally after reaching the cave he opened his third eye and directed a huge ball of fire which destroyed all living things in the vicinity of the cave. Then he instructed Parvati to listen carefully as he narrated the Amar Katha. He also instructed her to make some sound regularly to let him know that she is listening (This was because during the narration he would go in a trance and convert into what is believed to be the ice lingam which is worshiped today).

Then Shiva started the narration and assumed the form of atma linga (A Shiva linga in which Shiva himself is present). From here onwards there are two parallel legends about Amarnath.

One legend says that when Shiva created the ball of fire, it destroyed all living things around Amarnath, but left an egg untouched as it was hidden beneath the deer skin on which Shiva was sitting.

The other legend says that a parrot hatched from egg and heard the Amar Katha. While Shiva was narrating the Amar Katha, Parvati happened to fall asleep and it was actually the parrot which was making the noises. Therefore Shiva was under the impression that Parvati was listening to the story.

However when he finished narration, he realized that Parvati was actually asleep and it was the parrot which had listened to the story. This infuriated Shiva, who sent his trident to kill the parrot. To escape the trident, it is believed that the parrot entered a lady, who was wife of a sage and started to grow inside her womb.

However since it had already listened to the Amar Katha, it did not want to be born in a world full of Maya (illusion). Therefore even after the baby was due, it did not come out and the sage’s wife was in great distress. The sage then prayed to Brahma, who told the sage the reason why the baby was not coming out. He also advised the sage to approach Vishnu, the Lord of Maya, to temporarily rid the world of Maya so that the baby would come out. Accordingly the sage approached Vishnu and Vishnu removed Maya from the world temporarily. The baby which was born was called Shuka (Shuka in Sanskrit means parrot) and he grew up to become a famous sage “Sukhdev”

After this incident, Shiva ordained that anybody who listened to the Amar Katha or who visits the Amarnath cave will attain moksha (Freedom from the cycle of birth and death).”

After having Darshan, We came down from the cave. We took some breakfast and hot Masala tea from the Bhandara and started journey towards Baltal.

Stepping out from home exposes us to many risks. This is particularly true for overseas trips. Any unforeseen event like a delayed flight or…