I had a wonderful opportunity to visit the famed cave temples of Badami. I went in a group tour to see several places in North Karnataka and Badami was one among them.

Badami is a small town in Bagalkot District of Karnataka, and it was the place the famous Chalukyan kings chose to establish their kingdom about 1500 years ago. They built several fascinating temples in Badami between the mountains and the lakes.

Agasthyamuni Lake below the cave temples

Our bus took us to the foot hills of the red sand stone mountains, which was just few kms from the main bus stand. Though it was an early morning in April (around 9 a.m), the sun was not showing any mercy on us, and in the hot sun we climbed up to see the architectural marvels of the mighty rock cut temples built in a series across the mountain.. Three of the four temples were dedicated to Hindu Gods and one was for Jains (two temples for Lord Vishnu, one for Lord Shiva and the last one for Jains).. It was nice to see that they were well maintained and protected. 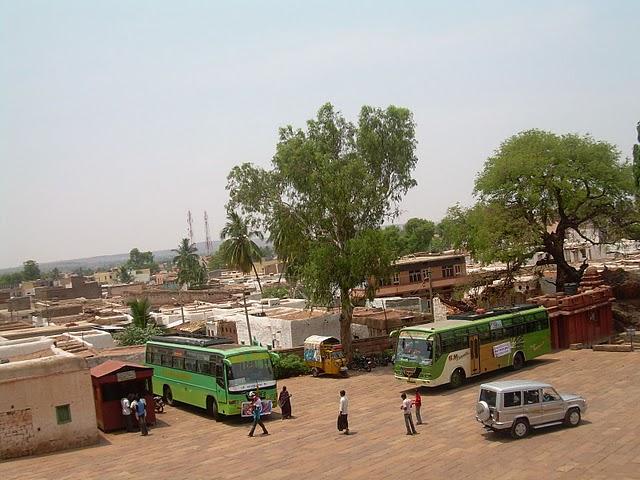 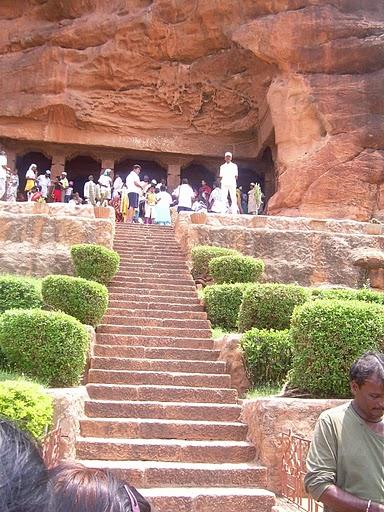 When the guide was explaining the history and the mythological poses to us I was flabbergasted, like many others in the group. The statues of 18 armed Nataraja (Lord Shiva) in 91 imposing dancing poses, Ardhanareshwari (half man-half woman), Vishnu in his Varaha and Trivikrama incarnations conquering Earth with one leg and rules the Sky with other foot, Man-Lion, and Mahavira with the 24 Tirthankaras etc were really fascinating!!! Our guide even showed us how so many poses can be made, by choosing any one of the left hands in combination with any one of the right hand. What an imagination!! Some statues were partially destroyed . 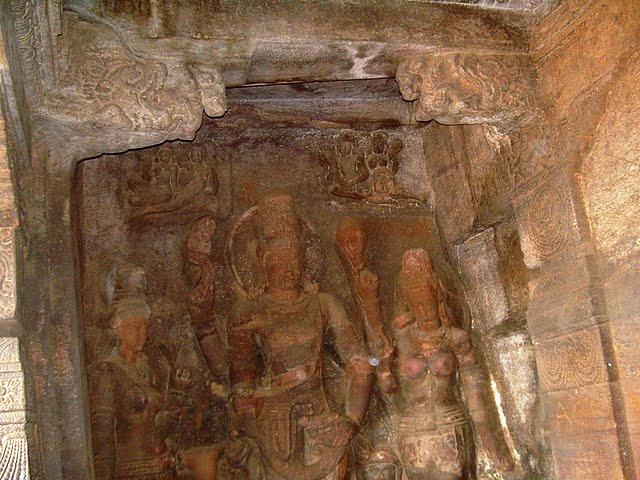 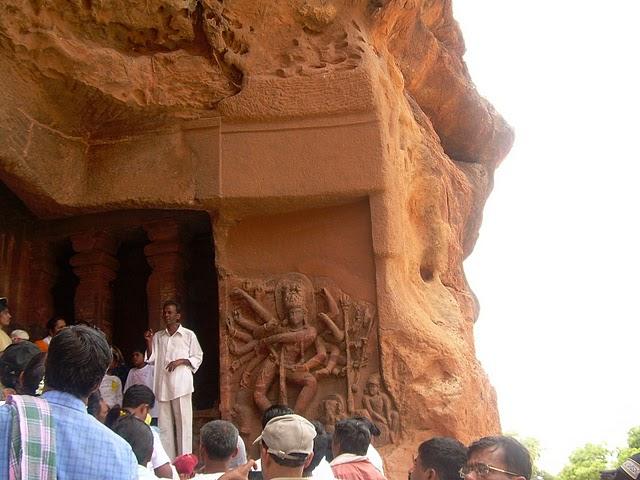 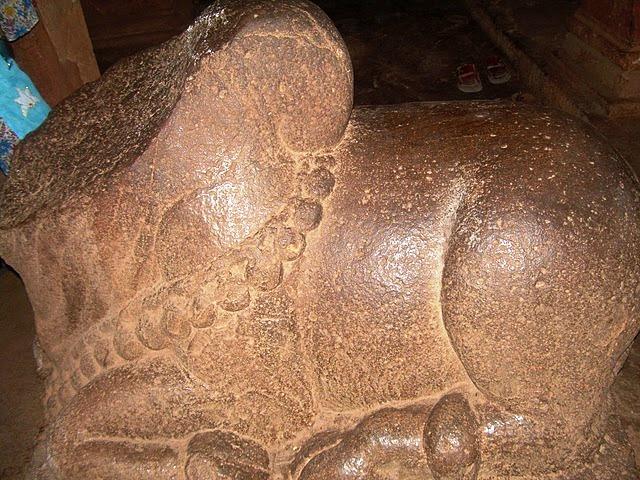 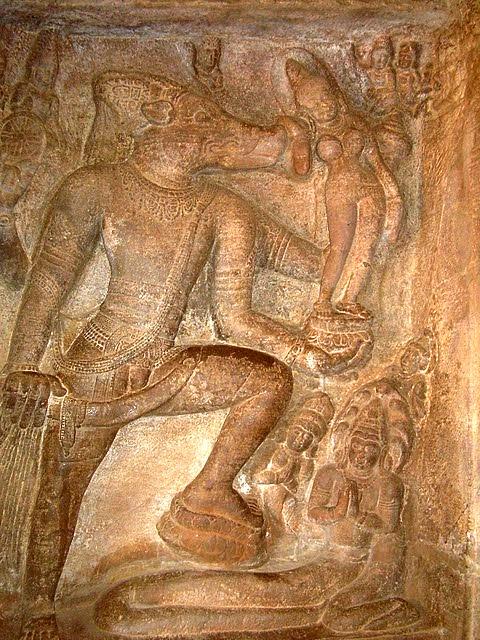 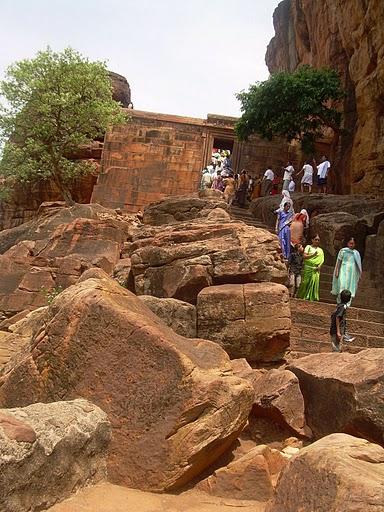 Tourists climbing to the 2nd cave temple from the 1st cave

Design on the ceiling of the cave temple

Though I had read about the beauty of these temples in various sites and blogs, experiencing it by being there and exploring them was something which words can’t explain enough. Even in the scorching sun, the gigantic deep reddish sandstone cave temples looked marvelous!! .

The monkeys of Badami love the abundant tourists who visit their kingdom and affectionately they may show their love by trying to snatch away your water bottles or juice bottles, or even any other eatables in your possession. It need not be only eatables; whatever fascinates them they may try their stunt on it. If you don’t want to spare them you have to be extremely careful. My sister had bought a bottle of orange juice to carry with us for our upward journey to the cave temples and as I was paying the money, the next moment it was not in her hand, but it had reached in the hands of one of the monkeys who inhabited there! It vanished from her hand within such a short time!

The view from the top with Agasthyamuni Lake (Agasthyathirtha Lake), with rocky hills surrounding it on three sides and sandstone temples at the feet of these hills, was amazing. You can get a magnificent view of the lake from the third and fourth caves. It is said that this lake has no source of water, and the water had ayurvedic properties earlier. 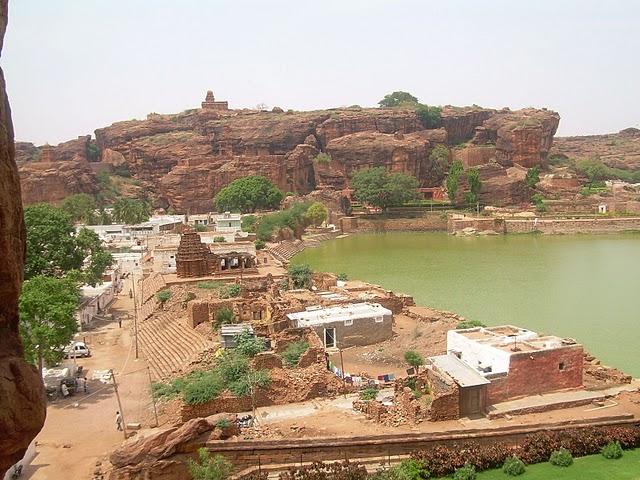 A view from the top of the 1st cave temple

As I was moving away in our bus to our next destination, I was all the way thinking about the amazing history of India.

The best time to travel to Badami I think is, between October and mid March, to avoid the heat. .