We (me, wife and our two month old son) went to Panchgani for a day to unwind after a long hiatus. We did not want to do sightseeing, just relax in cool environs. This was the time when winters were ending and summers were starting and wanted to savor cool atmosphere for one last time in this season. We were looking for a hotel/resort nearby Pune where we just check-in and don’t have to go out for anything, serves food, have lots of garden, trees and quite interiors. Around Pune, Panchgani is a location where we could get all these; nice resort type accommodation, salubrious climate and easy connectivity.  After some search on the internet we zeroed in on Prospect hotel in Panchgani which is a heritage hotel build almost 100 years back and rated one of the best in Panchgani. They have various cottage accommodation spread over a sizable area just below famous Table land with greenery all around and also provide in-house food about which I read a lot of praise. My wife teased me that I chose this one just for its food which was partially correct. The other reason being I am partial to anything wooden & vintage. 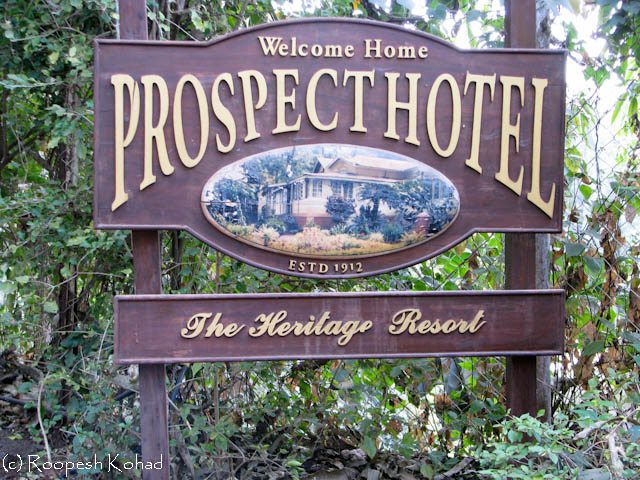 Insignia of the hotel

We booked over phone and started on a working day in the morning for Panchgani. We could not wait for weekend as there were other plans and anyway the hotel gets full during weekend and may not have got booking on short notice. We got discounted rate of the rooms up to 20 percent which includes all meals. The place is around 115 km from our home in Pune and we drove leisurely through Pune city and then NH-4 and later turn towards the road going to Mahabaleshwar. We had a small hiccup in the journey when we got a flat front tyre just few kms before the hotel. I called up the hotel and they sent a cab immediately while I tried to change the tyre. The cab arrived and the driver changed the tyre for me.

As we entered the hotel gate the greenery welcomed us. Tree lined and well marked road & entrance like entering into a royal place. We were happy to have chosen this hotel. As soon as we stopped there was an assistant with keys to our room and we went to the room before checking in which was convenient for us with a baby. We checked in later at the main cottage (called King’s) where the owner family stays. 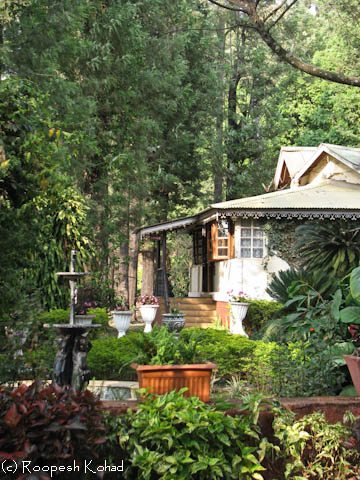 The main cottage which also houses the restaurant which was made of wood and full of antiques like telephone, piano clocks, thermometer and old books. Since it was late afternoon we straight went to have lunch which I was eagerly anticipating. They have in house cooks and serve veg and non-veg dishes which one probably wouldn’t find commonplace. For non-veg they had Chicken-teriyaki, chicken & egg patties and mutton curry along with roti, dal and rice. The chicken patties were delicious and I was wondering whether we would be able to have any main course as I continued gorging on it. Everything was delicious and I ate slowly to savor the dishes fully. For veg there was bhindi, mutter masala, paneers balls with stuffing which my wife liked very much. The desert was strawberry with cream. This area along with Mahabaleshwar is famous for its strawberries. Apart from us there were probably only a group of foreign ladies in the hotel so things were not rushed. The waiters were efficient while serving us for all our meals there.

Our room was part of Oakwood cottage, finely built with wood and had nice decor, well draped and with modern amenities. In the front yard there was a lawn lined with railing and Silver Oak trees. 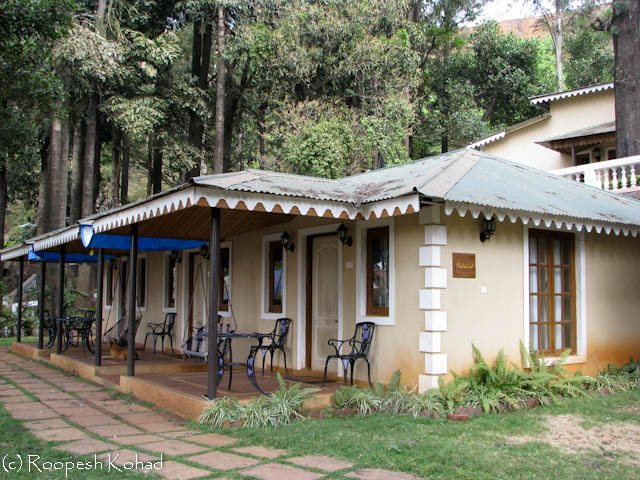 The grass looked so inviting that instead of table & chair which is also provided in the lawn we sat on the grass and I even slept on it and walked barefoot. The day was sunny but not hot and the trees provided enough shade. The only noise was of wind or birds chirping. I took a round of the hotel which had other cottages on the slope but not many guests. There is a swimming pool, a bird house with lots of colorful birds, swings, hammock and benches placed amply in the garden/lawn area.

Other cottage in the property 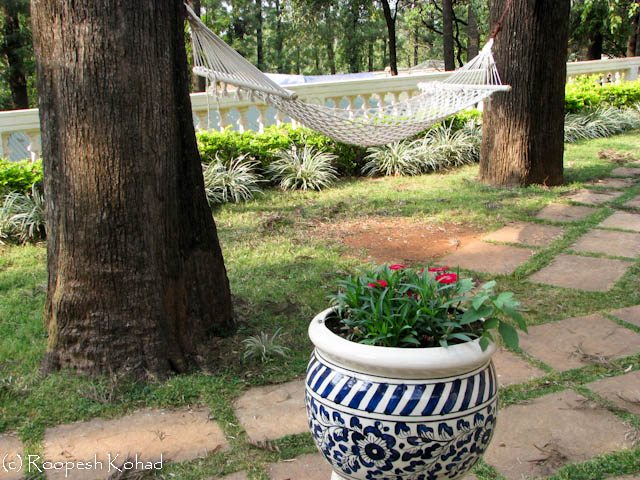 Hammock in front of one of the cottages 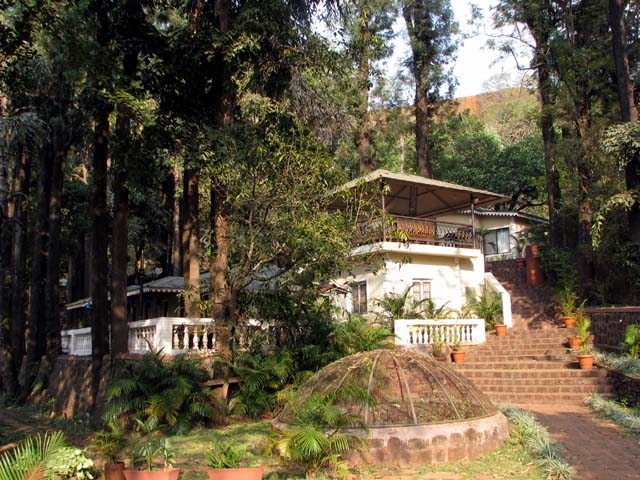 In the evening we had tea served to our room which we had in the lawn. They had placed tables and chairs in the lawn where one could have tea or just sit and relax. We made good use of them. I alone went for a bit of walk out of the hotel up to the main road. The area had other similar hotels but probably lacked the heritage. There was a small garden on the main road which had some interesting flower plants.

At dinner we were again treated with delicacies like garlic chicken, roasted chicken, fried baby corn and other regular items. The desert was vanilla ice cream with chocolate. After that we just took a walk around and went back to our room. Having nothing much to do is what we had come here for.

In the morning I woke up and went out to take a walk. It was not cold but quite pleasant with sun peeping through the tree leaves. I tried to meditate a bit but due to lack of practice could not do much. Breakfast was again a delicious affair poha, juice, papaya, eggs according to your liking and tea/coffee. I had scrambled eggs on toast which was amazing very nicely done.

I concluded that their kitchen, dishes and serving mannerism are all geared to match the western standard as the hotel being a heritage one originally founded by a British is striving to maintain the charisma of bygone era. Even the music they played was completely western but soft and subtle where you are not bothered and have conversation.

There were some interesting creatures like the owner’s dog which was well built but a little old, a troop of monkeys which passed by the property with lots of toddlers clinging to their mothers and birds in cage with lots of pairs of love birds, parrots etc. Had a wonderful time observing them.

Creatures at the hotel

Overall it was nice experience staying at such a property and would fully recommend it to anyone.

After wandering around the hill, you are drawn back to the crown jewel that is the Stup 1. The four magnificent gateways with their exquisite carvings are the main attraction of Sanchi and its trademark. The stup was embellished with the eye-popping carved torans in the 1st century BC by the Satavahans. Satavahans were the right people with the right credentials for the job. They gave us the glorious Ajanta temples. You are just relieved that the torans have survived for over two thousand years in almost pristine condition. Of course credit goes to Cunningham and Marshall for the restoration efforts.

The four gateways are installed at four cardinal directions of the stup. They have a common design – two square pillars with capitals and surmounted by three parallel architraves. All sides of the columns and the rear and front of the architraves are profusely carved. You could mistake the carved panels for wood or ivory. A lot of carving is overlapping and would require highly skilled workers. Reportedly, the workers were ivory carvers of Vidisha.