Our day 3 was the day ushering a new year on this planet. HAPPY NEW YEAR was the wish on our lips. When I opened the door of balcony opening towards the main busy chauraha of Surajpole, a surprise awaited me as in beautiful colours, it was written on the main crossing, NAV VARSHA KI SHUBHKAAMNAYEN. Watched the news for some time on television and went for a stroll downstairs. Near the main gate of hotel was Trivedi Uphar Gria offering breakfast of kachauris, dhokla and poha. I thought it to be a nice option instead of oily Paranthas that we have at our home in Punjab. So went to our room and laid threadbare all the choices in front of my better half and kids and unanimously all agreed to feast upon poha and kachauris . The stuff was very delicious. A nice change , had ginger tea which was offered by hotel staff(paid naturally) and got ready for the day ahead. Our first stop was to be the City Palace.

THE CITY PALACE: The Palace was a magnificent building, sprawling and inviting. We took the general tickets plus entry fee that cost us rs. 375 plus parking fee of rs. 50. and entered the complexes. First thing that surprised me in the complex was a flood of foreign tourists at that place. I had not seen such a influx of guests from abroad anywhere. So we entered the Mardana Mahal portion of this complex without the help of any guide in human form or audio guide. As a history teacher I considered myself a tiny guide. HAHAHAHA….Till our exit at zenana mahal there were many gates in the complex. Mistakenly we had not bought the ticket for camera so no clicks, really sad. I really enjoyed the museum part especially the modern portion showing pictures of his highness Arvind singh ji mewar and his family members. I got immense knowledge from this portion as it depicted the insignias, emblems, coins of many Indian ruling states. My better half and elder daughter also thoroughly enjoyed the palace but not little Pavani but she enjoyed a sleep on my shoulders. The palace is a sprawling complex with some of the finest hotels located on this complex. Most surprising was the weather throughout our stay at Udaipur. Very pleasant which forced our heavy woolens to remain in our bags only. Our exist from the museum was followed by a little shopping spree at the souvenir shops. As we had planned to go to Jagdish Mandir from there, we exited from tripolia gate and lo, it was a narrow but fine hustled bustled market in front of us where the temple was located. First of all to quench our thirst , yes rightly said we had nimboo lemon. Bhakti wanted to taste fafra , so 100 gm of it but it was not up to our taste and then upstairs to Jagdish Temple. 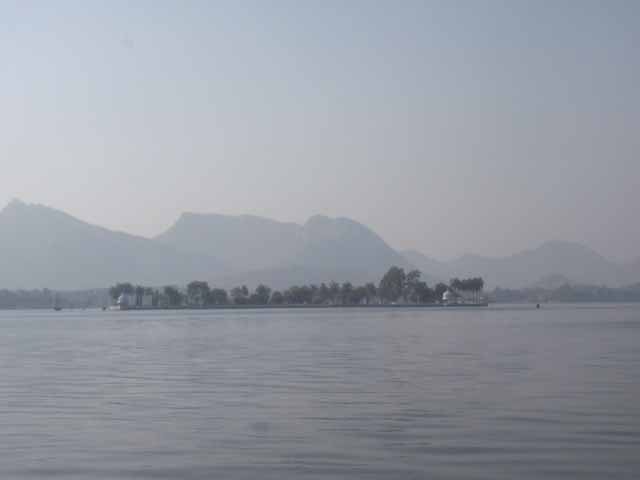 We reached this beautiful lake in about 10 minutes from the city palace. I just drove very slow to get the feel of this place. The place reminded me of Dal Lake of SRINAGAR and Marine Drive of of Mumbai. 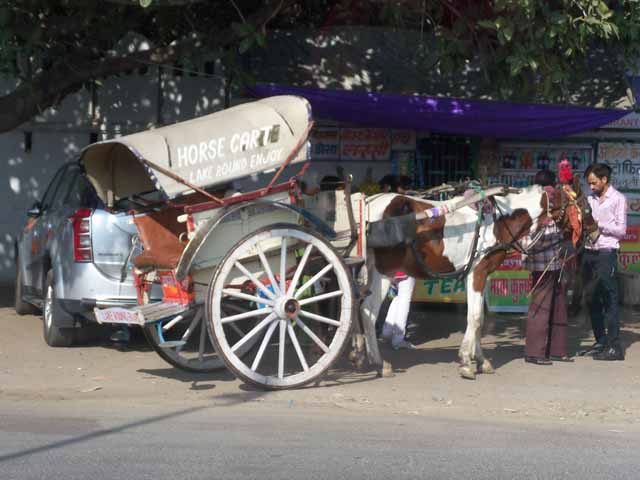 Tonga as seen at fatehsagar lake

What a scenic place it was. CHOWPATTY like bazaar was so inviting to us but we had planned to visit Shilpagram firstly.  So after a drive of about 10 minutes we were at shilpagram. This is the place representing the culture of not only Rajasthan but also of other states like Gujarat. 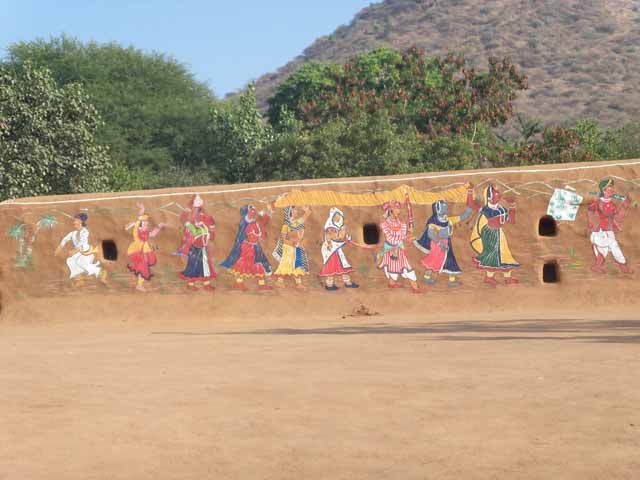 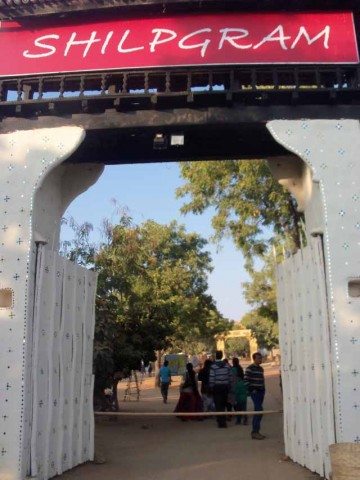 Entrance to shilpagram, the cultural hub

The place was a cultural hub. Ticket cost was perhaps Rs. 30 per person plus camera ticket of rs. 50. As we enterd te complex, a folk dance was going on. Then started our internal tour and encountered an old man weaving a shawl at first stall who was from Barmer.His art was really worth watching. Other stalls in that row were of bandhej suit sellers and silken dupattas. At one stall was folk music of Rajasthan being presented.  We stopped at a stall of Mojri maker. Mojri is hand made Rajasthani style footwear. The maker boasted of making Mojri of nail size. Bhakti and Pavani bought Mojris for hemselves. After that went to the huts on display(like from kutchh, barmer, konkan, bhuj). Bhakti was on clicking pictures mode throughout the shilpagrama sojourn.

Shilpagram is a cultural hub offering a lot to the traveler who is looking out for folk art and tradition. Though Shilpagram is a fantastic place. I personally feel that the place is not for the average tourist of now a days who’s more interested in the coomercial activities and commercial places. 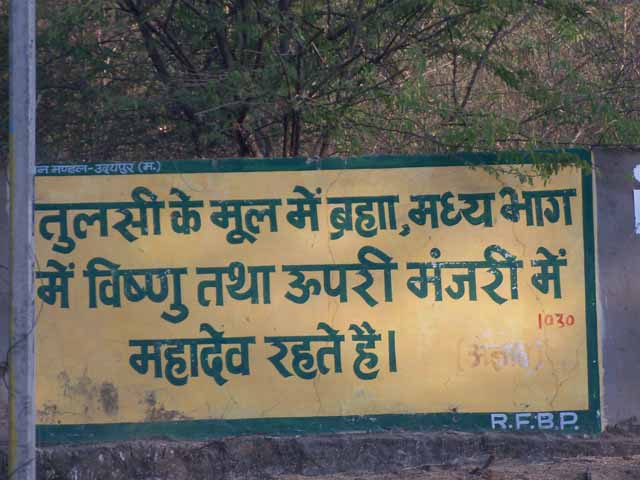 words of wisdom near shilpagram 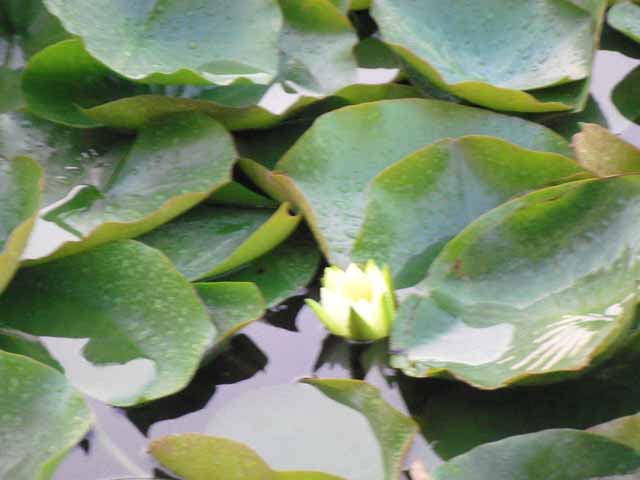 I had read alot on different travel sites about this tourist place in Udaipur. Just about 10-15 min. drive from shilpagram, the garden is beautiful one and one can easily see glimpse f the famed mughal gardens of Kashmir in it but frankly this garden though beautiful can not match the grace f the famed shalimar and nishat gardens. Lawns are well maintained and various plants here are well cut and maintained. A worker at the garden told us that there were 5 fountains in the garden complex though we took a stroll and visited just 3 fountainss as we were tired enough a long day torivaganza. Dear Pavani was also asleep at that time on my shoulders so Imust say here that we paid just a fleeting visit to Sahhheliyon ki Bari Exited from the complex and assked for the way to BHARATIYA LOK KALA MANDAL .

BHARATIYA LOK KALA MANDAL: We came here primarily on that day as it was nearby saheliyon ki bari . When we reached there, we found that live puppet show was going on there in the open air theatre about which we were not aware of ( a pleasant surprise). There were about 100 people enjoying the show. Awell co-ordinated one, the puppet show firstly engaged us in elephant ance ad then through the rich world of puppets,  a sarangi vaadak and tabla vaadak were explored. After that came three performances of live dances which showcased the rich repertoire of Rajasthani culture. Firsty it was a dance by three ladies called 13 manjire dance which the sutradhar explained to be a devotional dance . Next was a dance called fag from the artists celebrating the festival of colours. Third and last one was truly the most mesmerising as it was Bhavai dance by an eminent artist. He balanced 10 Kumbhs on his head one by one and danced . It was just great and explored the unexplored avenues in front of s. Ithink ” BHAVANI BHAVAI” by Ketan Mehta had also explored it though I havent seen the movie.

After such a mesmerizing evening we reached our hotel, parked my car in the premises and retired to our room not before ordering a thali from Kailash dining hall nearby which was delivered to our room in exactly 15 minutes consisting of 6 chapatis, chawal, papad, dahi , 3 vegetables and a dal ( a delicious fare). GUD NIGHT TIME FOR THAT DAY.

A Trip to Mewar – Udaipur Sightseeing was last modified: April 14th, 2021 by Rakesh

I did not realize the importance of this place at the time of clicking this snap… Found out later that this was the place where the sindhu Darshan festival is held to comemorate and celebrate the Sindhu River, which plays a major role in the lives of the people here…