Hotel Nagpal at Ajmer was a nice hotel newly built but I  could n,t have a nice sleep there and at about 6 A.M went for a stroll. My main purpose was not inquiring about the way to Pushkar( which was an easy one) but to inquire about the route to Punjab from there other than Jaipur and Delhi. I had read about such route existed in form of CHURU-HISAR-AMBALA highway but was not sure about the practicability of this road in real sense. I along with my wife had also plan to visit famous heritage havelis of Churu-Nawalgarh havelis about which I had heard a lot. Firstly I asked about the distance from Ajmer to Churu which came about to be 330 km approximately. Luckily I managed to start a chat with a driver of a goods carrier near the Railway station. ARRE BHAI SAHIB CHURU ROAD… HAI TO PAR JAIYEGA MAT…… was his response which tells all about the road to be in deteriorating condition , according to him. You shall be able to cover only 100 km in 5 hours was his response. How authentic it was? I could,nt fathom as he was my only reliable source at that time. He suggested me to go through HANUMANGARH-BATHINDA highway instead and praised the highway to a hilt. So confused a bit more after this short chat I returned to the hotel and discussed the plan with my wife whose approval was necessary. Bad or worse or good , we are taking the Churu road o the familiar one Delhi-Jaipur road was the command. So sorry for HANUMANGARH-BATHINDA highway that time. It was final thatwe shall spend our time at Pushkar till 11 A.M and then off to Jaipur for half day sight-seeing before going back to pavillion(Jalandhar). We had panned to have our Breakfast at Pushkar( JO US DIN HUA HI NAHIN)……The drive from Ajmer to Pushkar is very good and it remimded me of the car drives in Shivalik hills. Weather was very good.

PUSHKAR: A small and picterusque town famous for one and onky temple of Brahma Ji, the town is also famous for the foreigners coming to the time to learn Yoga and instrumental music in the streets of Pushkar and numerous cafes adorning the streets. I can vouch for only temple perhaps my main motive was that only so I did,nt bother to look out for the guests from abroad or cafes. After inquiring my way to the temple of Brahma Ji, I straight away drove in that direction until I reached the place where Ghats were located. I thought may be temple is located in the centre of the sarovar there. So we all went towards the Ghat area and the thing that I  wanted to avoid at all costs followed us , hounding by various priests(pandas to have one or other form of puja for salvation of soul. As a person I m dead against these things as it seems to me more as an economic activity of these priests, nothing more(my personal opinion). Many persons were involved there in one or other ceremonies per their beliefs. But I did,nt want to listen to these priests about all this. One priest said “Unless you take bath in these Ghats and perform a puja your visit to Brahma temple would be incomplete” Why so? I just asked myself. After enquiring again about the temple from a family , we came to know that it was just on the next end of the street. I just pulled my family members from there hearing this. While walking towards the temple, in one corner , there was a small shop(PANDIT JI KI LASSI). Iski story baad mein bataoonga. We reached the temple after crossing a small market. The exclusive Brahma temple. 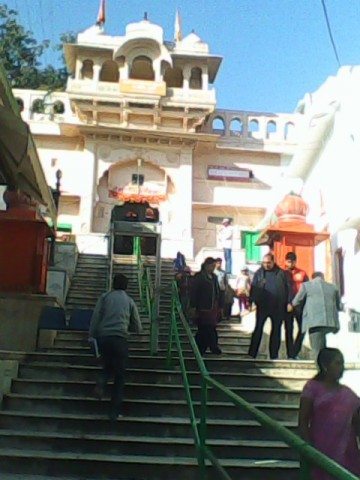 One and the only Brahma temple

The temple seemed to me just like a normal temple which can be present in any other city but perhaps its exclusivity lay in that it is dedicated to Lord Brahma.

A view of the Brahma Temple

We bought Parshad from a corner shop , deposited our camera there and paid our salutations to Lord Brahma. Our stay in the temple was for 15-20 minutes. Exited and came to that corner Parshad shop to have our belongings when I saw a group of persons wearing heavy woollens and ladies covering their head with scarves. Men were wearing Band Gala coats and Himachali topis having green Band. I asked one person whether they were from Kinnaur. He replied in affirmative. Bhakti was surprised .hahahha….. kaise pata chala…. ARRE GREEN VELVET BAND ON HIMACHALI TOPI INDICATES THAT THEY ARE FROM KINNAUR. Nothing mysterious I told her.  There was a pakora shop there but all of us wanted to have proper Breakfast( paranthas and all). Strolling we came to the shop. wahi.. (PANDIT JI KI LASSI) and I got tempted to taste it, same for Bhakti and Savita, my wife. A little conversation folowed with him which was as such.

Pandit Ji: Pure and sweet, taste mein best, milegi( his exact words while he was busy churning the curd in a matka).

Pandit Ji: Please taste kijiye. I just said to leave that but he became adamant that taste to karna hi padega tabhi Lassi milegi( the taste was out of this world).

Pandit Ji: I was also priest beforehand and doing all that work at Ghats.

Myself : why you left all that?

Pandit Ji: Sab pakhand aur jhooth hai. These persons are not real priests , just befooling people so left the work was his response. I could not bear all that. ( These words came from the mouth of the person who had seen all and done all). Lijiye Lassi Lijiye. 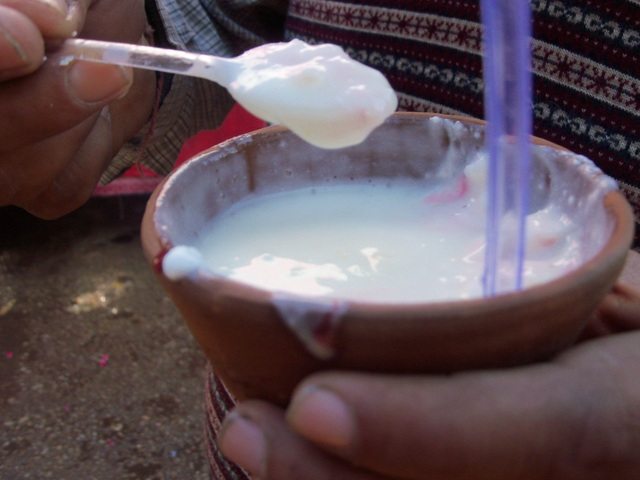 Lassi that had been talked about

I opine that I had not tasted in my life till now more tasty lassi than this one. Thick, pure, no adulteration and decorated with the drops of Rooh afza. I thanked Pandit Ji for his wise words and such a tasty Lassi. His words forced me to ponder about all the ritualistic ceremonies , commercial aspect of it and also whether rituals are necessary for religion or region has been invented to do rituals. Anyway, it was goodbye Pushkar then and I came to the main road as I wanted to reach Jaipur to give me luxury of half day sight seeing. One thing that I noticed in Pushkar is presence of a big Gurdwara there. Normally Gurdwaras are present in all the cities and towns but I didn,t expect it to be found in Pushkar. May be Pushkar is visited by a lot of pilgrims from punjabor those bbelonging to the Sikh comunity? SHAYAD…so JAIPUR in next post.

A trip to Mewar, Raj – Pushkar and Jaipur was last modified: May 1st, 2021 by Rakesh

Do you have any plans for the next vacations? Vietnam is an ideal destination with various beautiful beaches. Click here to get more information before traveling to this country.