Day 5, 3rd day of January 2013 started with gunguni dhoop in Udaipur. That day we decided to have punjabi breakfast so aaloo paranthas from Kailash Bhojanalaya was our breakfast in Rajasthan. We were sure that we had to go to Kumbhalgarh that day but what could be other points of excursion to explore was still undecided. I ordered 3 teas and 1 milk for dear Pavani. The person who brought these to our room suggested that we could also explore Ranakpur Jaina temple. So decided, Ranakpur also. After breakfast , we were ready for that days, excursion which came out to be a long day as the day unfolded as Haldighati, Nathdwara and Ekling ji also got added as the day passed by, but how? We,ll come to that later on.

On the way to Kumbhalgarh and the fort.

We had to travel on Jodhpur highway to some extent and then take a turn towards right after some 22 kms of travelling on to a link road to reach Kumbhalgarh. Travelling on highway was mast and the turn on to a link road brought us to the interior part of Rajasthan with the naked beauty of Rajasthan villages of this part in front of us at its best. The road had become single and to some extent it was like a roler coaster ride of low gradient slope(down then up , then down -plain and then down and up, like this. I was enjoying the drive .  What surprised me was very less traffic on this road , I could not fathom the exact reason for that at that time. It could have been that only a few tourists go to Kumbhalgarh or there could have been another way to reach there. What surprised me on the way was the means of transport as local conveyance( JEEPS). Bahut saare log latakte hue…….. On the way to Kumbhalgarh, two big villages or we can say sall towns came( Kelwara and Saayri). It was at Saayari that I got confused to go straight to Kumbhalgarh or to Ranakpur as one board was pointing the direction towards the latter also. So decision left to my better half  and it was decided to proced firstly to Kumbhal garh. From Kelwara it took about 20 minutes to reach the massive fort.

THE FORT
As per historical tradition , the fort is about 36 km area wise and boasted of many buildings inside the complex.

On the way to Kumbhalgarh

Now it was for us to observe these as first hand experience. The complex is under Arheological survey of India as a heritage building. What surprised me again here was the number of our guests from foreign countries. Sirf wahi dikhai de rahe the aur hamare Bharatiya Bandhu bahut kam. (We have to pnder about it). So there started our uphill journey in the fort complex.

A small lake on the way to kumbhalgarh

I thought Pavani woul;d not be able to cover it apne aap but she was more than happy to do that. Weather was excellent( KHILI dHOOP). 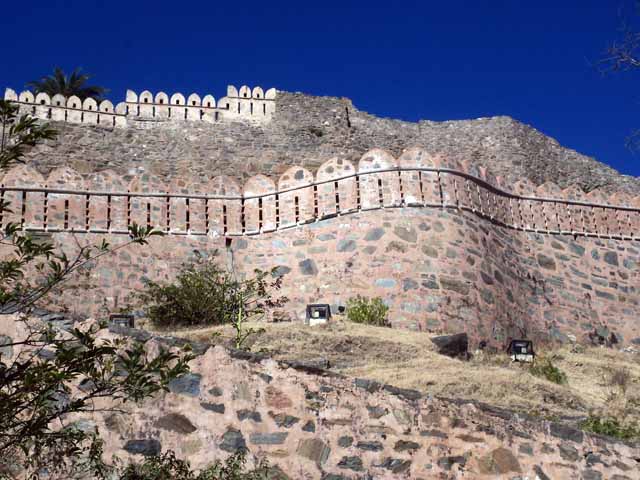 Firstly we entered a courtyard after climbing 2-3 rounds of zig-zag way. There was a statue under a tree may be Isht Devata of the area. Most important enclosure in the complex historically was the birth place of Maharana Pratap( my viewpoint).

View from the top of Kumbhalgarh 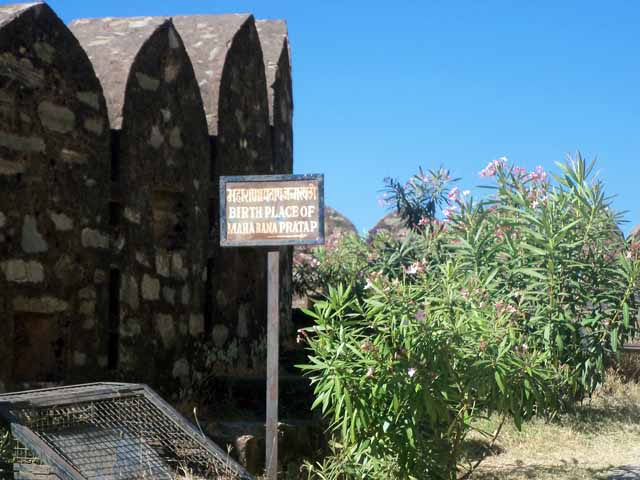 I guess very few salutations had been done at this place wwhich lie in the wilderness far away from the madding crowd and urban jungles. There was born the man who could hold its own for 21 years against the mughal emperor Akbar. In the fort complex only we saw about 20-30 huts indicating human habitat there 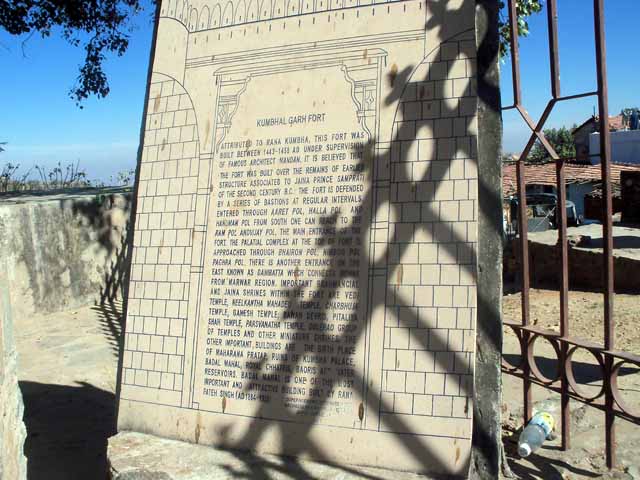 History of Kumbhalgarh – As on a Stone Pillar

And also a board indicating towards Kumbhalgarh sanctuary . The view from top of the fort wall was awesome with large forest tract visible around the fort. It seemed at Kumbhalgarh as we had lost contact with the world( Sirf hum, kuchh aur log, khandhar aur jungle). We spent about 2 hours there and proceeded towards Ranakpur. I had seen a signboard just before reaching the fort pointing towards the road to Ranakpur.

ON THE WAY TO RANAKPUR AND THE JAINA TEMPLE:

hahahahhaha……….. Any way the ordeal became less and plain road was there .  We were passing through  the forest area now and after a few minutes we entered the temple complex. So serene was the atmosphere there and about 30-35 vehicles parked inside the complex. Main reason that I found for heavy rush was that people from Jaina community revered the place and comee there just as they have Dilwara temples at Mount Abu. So a mixed crowd of foreigners and Indians there. And there stood the vast sprawling temple structure in white marble, so clean and so serene and so pious. Though built in the 14th century, the temple is maintained and administered by some Gujarati family ( many tourists from Gujarat were there). The beautiful carvings on the pillars was the main thing to watch out for. Jidhar bhi nazar maro pillar hi pillars…… The ceiling was the most beautiful one. 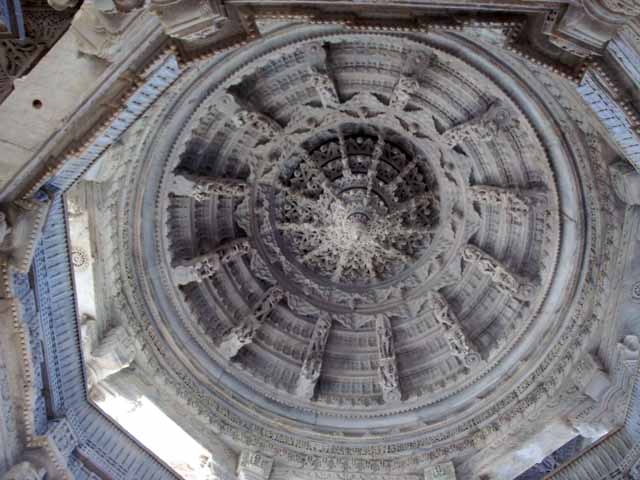 The beautiful Ceiling of the Jain Temple 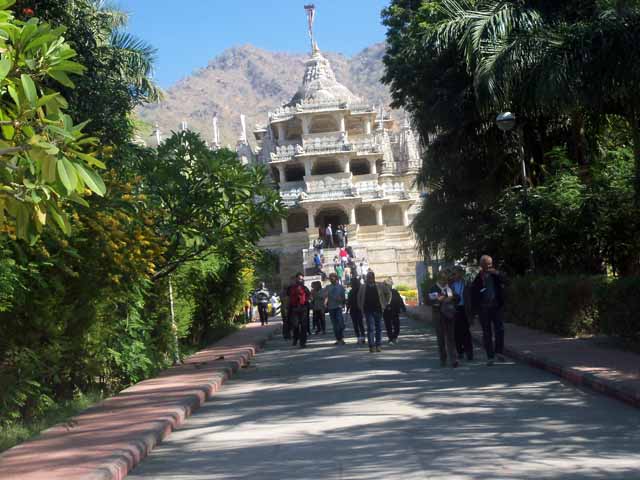 Another view of Ranakpur Temple

We had a parikrama of the temple and clicked some pictures. Each community temple has got a different ambience. It was my first visit to any Jaina temple and I found its ambience as similar to the ambience of ISKCON temples. We stayed there for sometime. Pavani was feeling hungary . In canteen only khakhra was available at that time but she was not interested in that so we decided to go to Udaipur. This time I also encountered a bus going from Banswara to Jodhpur( Ranakpur is in distt. Pali). HALDIGHATI KAISE PAHUNCH GAYE AGLI POST MEIN BATAOONGA……..

A trip to Mewar – Kumbhalgarh and Ranakpur was last modified: April 19th, 2021 by Rakesh

There is something about us and wild life sanctuaries ..We chase and then we always get chased . We had gone to Tawang in…