Day 4, january 2, 2013 started with a lovely morning. With my family members sleeping , I went for a stroll around surajpole and thought hard what to have for breakfast. When I came back my daughters and wife savita was awake. After discussing with them the choice zeroed on to poha and kachauris with hot pipping tea in the hotel. While having breakfast we made our schedule of that day and planned to visit firstly Karni Mata Mandir.

KARNI MATA MANDIR
Got my car from the parking lot and drove towards lake Pichola near which was base point for Karni Mata Mandir as ropeway started from there. In these 4 days I encountered very less tourists from punjab but here near ticket counter Isaw a Toyota Innova with Ludhiana number . I got happy that people from punjab come to Rajasthan though lesser in number. Bought tickets for all and waited for my turn to ride on ropeway car. The ride is of 4 minutes. It was a thorugh enjoyble ride upway. Where the ropeway ride ended , there was  restaurant and an open courtyard from where view of Lake Pichola and Udaipur city was awesome. Guests from foreign countries were also enjoying the ambience.We clicked some pictures there. 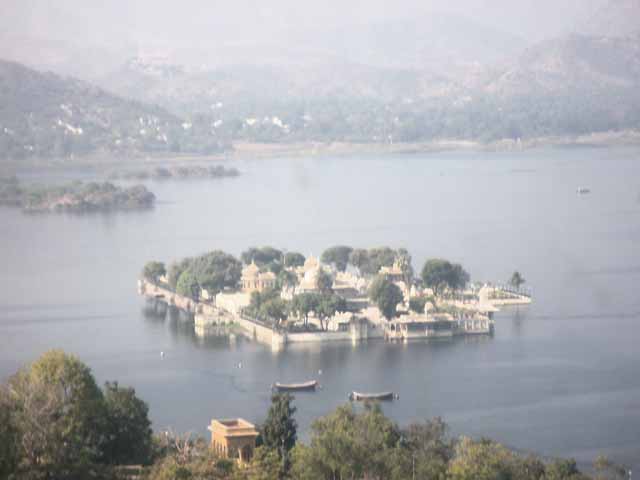 A view from Karni Mata Mandir 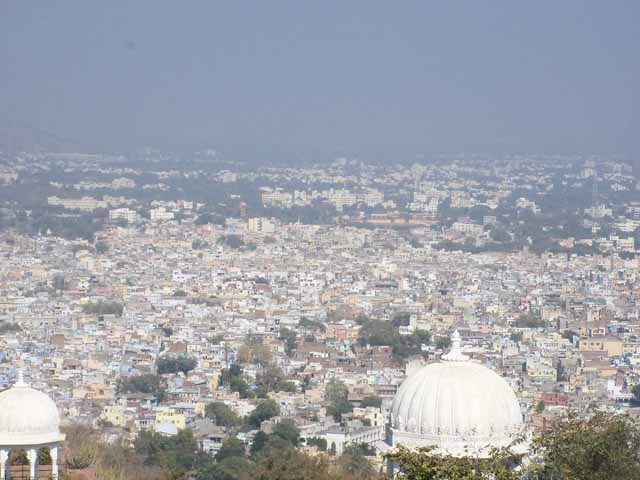 I guess that Karni Mata Mandir is situated within the walls of an old fort as parapets of the fort were clearly visible and we walked along this way to reach Karni Mata Mandir. Here, I would like to mention that a bigger one Karni Mata Mandir is inBikaner  Here the temple is under construction. An adoloscent photographer was tempting my kids to have photos clicked in  Rajasthani dress for rs. 100 each. He clicked the photographs beautifully and promised to delievered those in my hotel at 6 p.m. And what a surprise exactly on dot photographs were there.(though I had forgotten it completely). That’s honesty for you.  We thoroughly enjoyed this site and came back in ourcar. Then thought about where to go next and decidded to go to Ahar museum. After enquiring from at least 5-6 passerbys we reached the place but it gave me inkling that the site was not very popular with the tourists. The place was like any ither government museum but on a smaller scale. 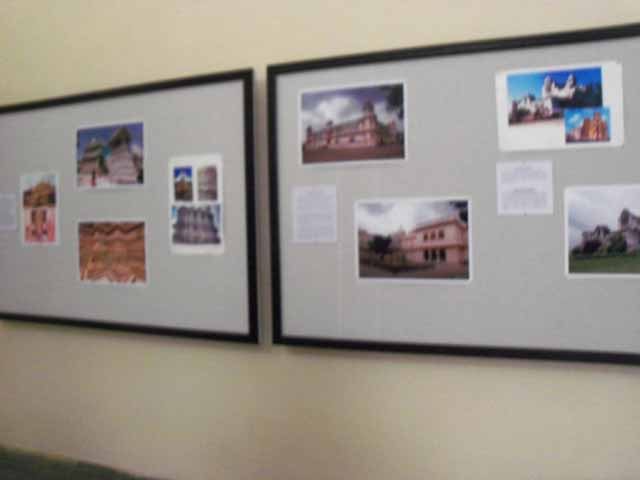 Most of the artefacts were clay seals and models. Ticket rate was very nomonal, perhaps Rs. 5 per person may be to encourage the tourists but what I feel that commercial aspects of tourism have started dominating the average Tourists’ minds.

EKLING JI TEMPLE
It was about 3 p.m that we exited from ahar museum and decided to go to Ekling ji which is situated on Udaipur-Ajmer highway before the historical Nathdwara town. When I was on my way to Ekling Ji just after 7-8 kms it resembled as Iwas driving in some hilly state(hills on one side and deep gorges on other side was the scenic view. So it was now only 2nd and 3rd gear for me. Frankly I didn’t expect such a terrain in Rajasthan. We as a unit were awed by the beauty this stte was offering. When we reached EKLING JI, the temple was closed and it was full one hour foe the gates to open. We paid our obescience from outside only and vrooom back to Udaipur. I would like to mention here that the temle is under maharan mewar trust and security guards posted there also bore badges of mewar security. Historically it is said that Bappa Rawal, founder of Mewarkingdom got blessings at this place only from god Ekling Ji to esrtablish the mewar empire.

SUKHADIA CIRCLE
It was fourth day in Udaipur and now it looke like this was my own city. I  felt so attachment with this city.Clean roads, sensible traffic sense, good ambience and culturally strong, this city had just cast its spell on us. I don,t know which route I took but that route took us straight to Sukhadia circle which looked like a min picnic cum entertainment spot. More than me, Bhakti and Pavani were happy on reaching there. The spot which excited Bhakti and me was a large common place with about 30 shops under one roof filled with street food and fodies we are though I try to control this urge. 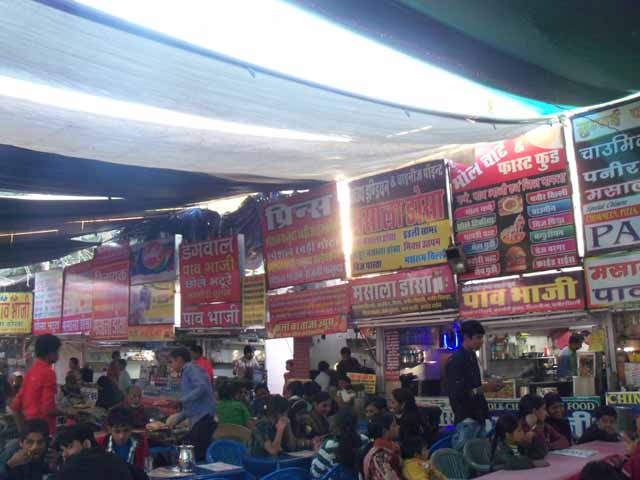 And the square (Sukhadia circle) was in form of a very small lake (gol-gol) with small boats in the shape of ducks in it(that excited little daughter, Pavani). I think the place got its name from Mohan Lal Sukhadia Ji, if I am right or someone kindly correct me.Agenda at Sukhadia circle:

1. Street food: Pao Bhaji for wife and Pavani, Dahi seb puri for Bhakti share by me. Kesar Faluda glass was also tempting my wife so that also.

2. Boat ride for Bhakti and Pavani with music on at the starting point.

3. Now a surprise element , some students working for Gandhi fellowship were promoting Art and craft through drawing and painting (random on the papers on road, a community service and were encouraging even slum and poor children to draw and paint).Pavani drew and painted for about 10 minutes and I think that was best part of Udaipur for her. 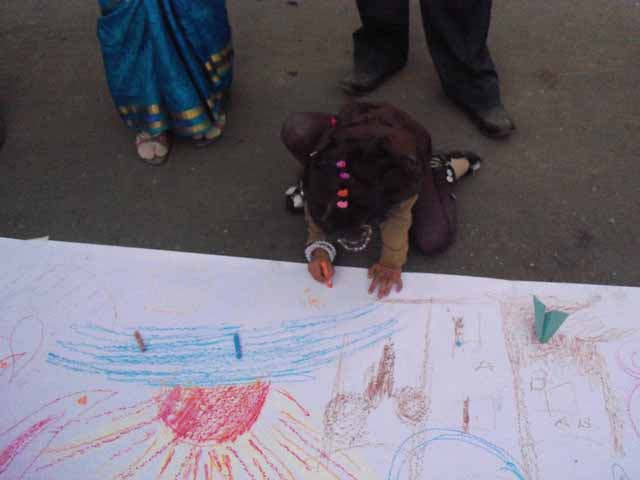 We spent a memoravble evening there and were off to Maharana Pratap Smarak to enjoy the light and sound show and to visit the museum located inside the complex .

THE MUSEUM
Very few visitors there at that time. museum is small but worth seeing especially the life like models of KUMBALGARH and CHITTORGARH. Model of KUMBALGARH helped us in making the mind to visit the place the next day( about 84 kms away from Udaipur) 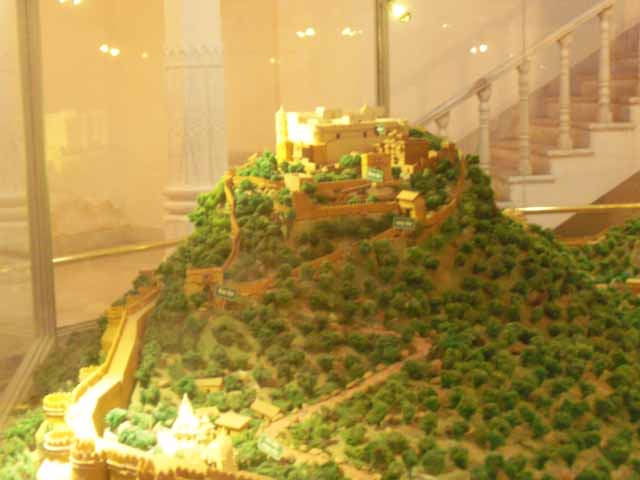 inside the museum at Maharana Pratap complex

THE SHOW
Open air theatre and pleasent atmosphere had really created a nice ambience and here the show started with the story of Panna Dhay, Rana Udai Singh, foundation of Udaipur , birth of Rana Pratap and Haldighati battle. I had expected that like Golconda Fort , Amit Ji( Amitabh Bachchan might have lent his voice but that was not still rich baritones were there. Most fulfilling was the ambience on hill to and the city was looking like a Jannat. About 8.30 p m and ready to wind up the day headed for the hotel, passed again JODHPUR MISHTHAN BHANDAR, the famous eatery on the way and reached our hotel. My sawaaris went to the room and I gossiped with the owner for a while who enquired politely about our day( I haven’t felt more at home other than this hotel and of course my home). The thing which I  found nice about this hotel is its homely environmentsans five star or three star culture as I avoid that culture and my budget also avoid that.So before a sound sleep. it was again a THALI from Kailash Dining Hall whose owner was also very nice.So gud night for 2nd day of January. Teesre din ki subah ki shuruat agle write up mein………

It was a long drive and we were dreading that it would get very grumpy in the end. Like my other road reviews, where…