It was one of the coldest evenings of January 2014; one of my old room-mate called me and informed me about his marriage to be held in Amritsar on 2nd of March. I have excused my wife and avoided a trip to Amritsar for reasons best known to me, but this time I could not help it. So, without giving a second thought we planned for our next journey ‘A trip to Amritsar’.

The trip to Golden city was not going to last for more than two days as the marriage was scheduled in March, year-end for all the Indian Companies, so extending the trip duration was just not possible. We booked two-way railway tickets and a hotel room in advance and got ready with the necessary arrangements keeping in mind our three years old daughter. Her comfort and climate acclimatization are the two most important aspects which we consider before we even think of travelling a mile.

Finally, the day arrived and we boarded Shatabdi Express from New Delhi railway station. Shatabdi Express is a luxurious train for short distance. We reached Amritsar around 2 o’clock and headed to our hotel. We had our lunch and thereafter my daughter went to sleep. So, our further plans for the day came to halt, thus we decided to take some rest as we started early that day and have to attend a function at night.

Next morning we woke up little late and therefore reached the breakfast hall late. Suddenly my friend’s father came and informed us that they have arranged few cars for all the guests to visit Wagha border and the Golden temple. I told him that we would like to see Wagha Border’s main attraction “Beating the Retreat” ceremony, which is schedule every day at 4.30PM. But he suggested that we might not have time in the evening, so go and visit border now.

We dropped all our plans and followed the group which proved a great deal at last. Within 30 minutes we all were ready to leave for Wagha Border. We shared the SUV with other 7 guests and headed towards Wagha. It was just 35 Kms from Amritsar city and took us around 45 minutes to reach. After reaching the Wagha border main entry gate (Border Custom gate), we come to know that people were not allowed to go beyond this gate before 3PM. Only persons with an authority letter can go beyond this point and we did not have the authority letter, so what next. We didn’t have any other option but to go back and visit our next destination Golden Temple. We were getting into the car and suddenly one of our accompanying guests called one of her relative and then we were on for Wagha Border. Later we found that she had one of her relative posted at Atari (Wagha is a small village of Pakistan, India border village is Atari) border, who has taken the necessary permissions and therefore, we were allowed to visit the Border.

For general public who comes to watch “Beating the Retreat” ceremony, they need to go through five security checks which take almost 2 hours; however we entered freely without any security checks? (This is called Jugad in Indian language). We parked our vehicles in designated VIP parking area and got a warm welcome from our known BSF Major. 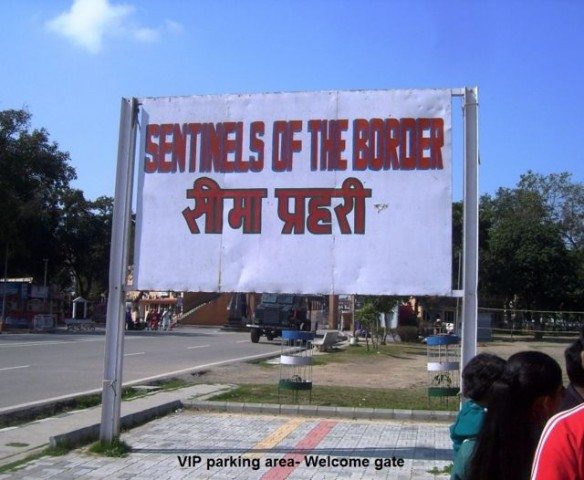 He requested us not to roam around and stay in a group. He guided us and showed all the corners of the border. He told us various stories of the border. He also informed us that this is the only Border where we have the retreat ceremony. It has an elaborate complex of buildings, roads and Fencing barriers on both sides. 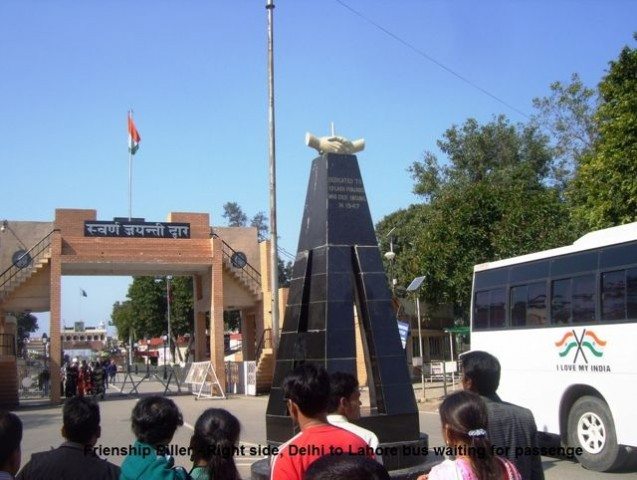 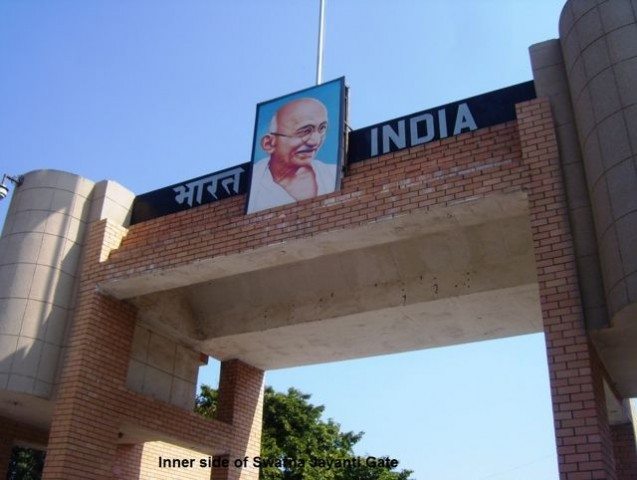 Inner side of Swarna Jayanti gate

We crossed the short stretch of paved no-man’s land, dividing 140 million Pakistanis from more than one billion Indians . We enjoyed every bit and tried to capture our emotions: – A proud Indian. Citizens of both the countries were just walking in and crossing the borders (of course after thorough security check). It had an amazing experience for us, though we missed the main ceremony. But never mind what we had experienced few minutes back was just beyond our dreams as we saw something which otherwise was not possible for us a common man/visitors. That day we felt, power gives priority. After greeting and giving vote of thanks to our Major Saab, we headed back towards the Golden Temple . 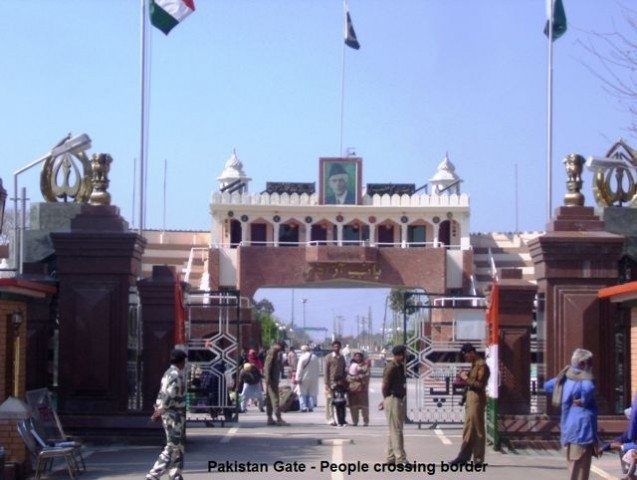 Pakistan gate, people crossing border as well as visit border like us 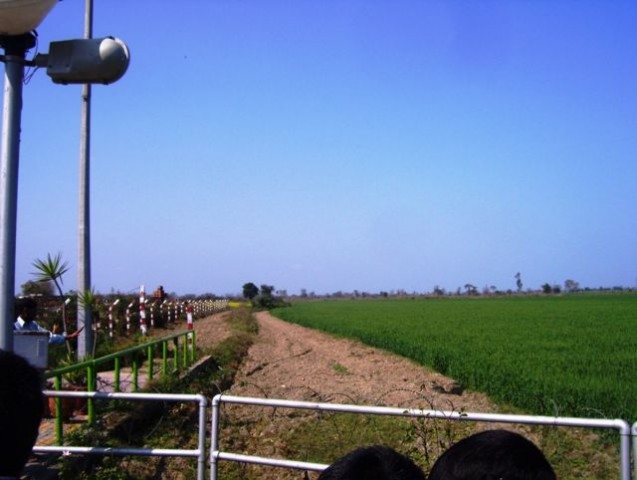 Indian farm land in protected area – left side is Pakistan

Pakistan side park with their martyr’s photograph 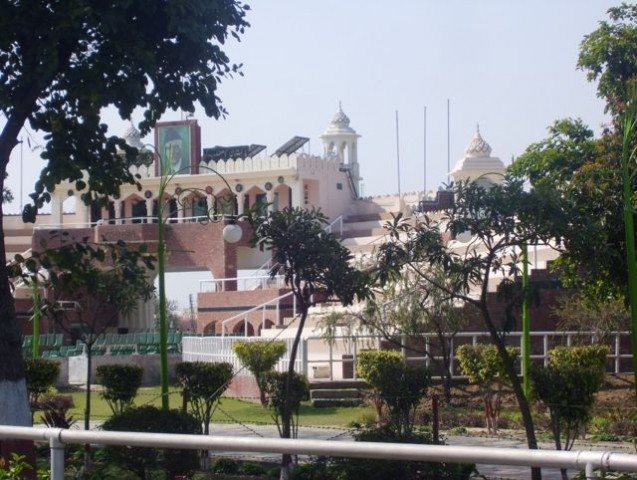 Seating arrangement at Pakistan side

At the Golden Temple:
After a wonderful experience at Wagha, we reached Golden Temple around 1 O’ clock. After entering to main premises, we shouted WOW! How beautiful it is. 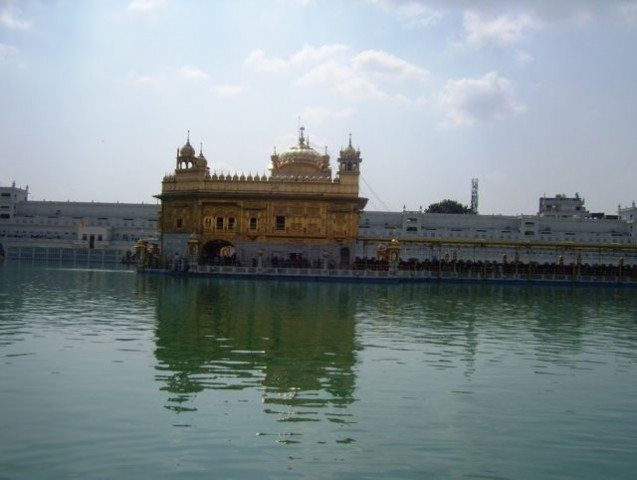 We are at Golden Temple

A very busy and rush Sunday, we saw a big queue for entry to main Hari Mandir Sahib Ji. Our other accompanied denied to stand in a queue and ready to back, because it would take more time. But we said we came here and without bow down our head, we will not back. So, we stand in a queue. A Sardar Ji came and advised us that Deepti, my wife and child can seat there until I reached near the entrance of the Sahib ji.

So, they seated in shadow and I moved slowly towards Sahib Ji. Finally we reached to the main gate and bow down our head in front of “Guru Granth Sahib”. We climbed all three storey of Sahib ji and enjoyed the view of the water. Our daughter was not ready to come back; we forced her to get down. We came out and took “Kara Prasad” on the exit gate. The queue was looked long, but it took only one and a half hours. It was 2.30 and we were feeling hungry. Without any delayed we headed towards “Guru Ka Langar”. We had langar and again said Sahib Ji “Thank you” for giving us opportunity to visit this holy place and meet up hunger of 70 to 90 thousand people every day. With a promise to Sahib Ji, we will back soon, we came out from The Golden Temple premises and headed towards Jallianwala Bagh

At Jallianwala Bagh:
We came out and headed towards Jallianwala Bagh, which is just 400 meters north of the golden temple. Jallianwala Bagh is a public garden (Bagh) and houses a memorial of national importance, established in 1951 to commemorate the murder of peaceful celebrators. On the occasion of the Punjabi New Year on 13th April, 1919, British fired on innocent peaceful people and killed more than hundred people, which is known as Jallianwala Bagh massacre. 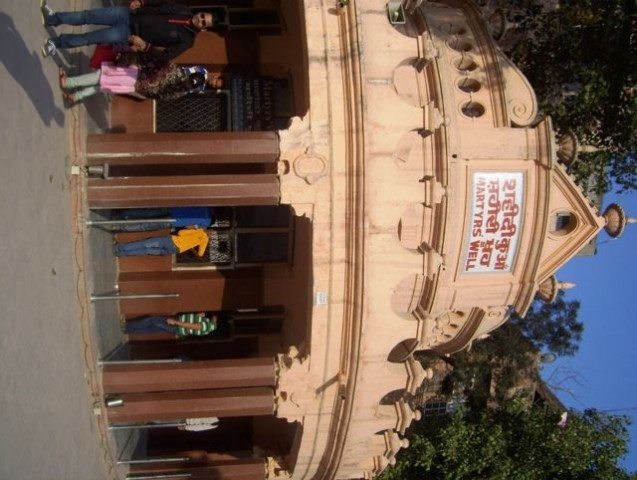 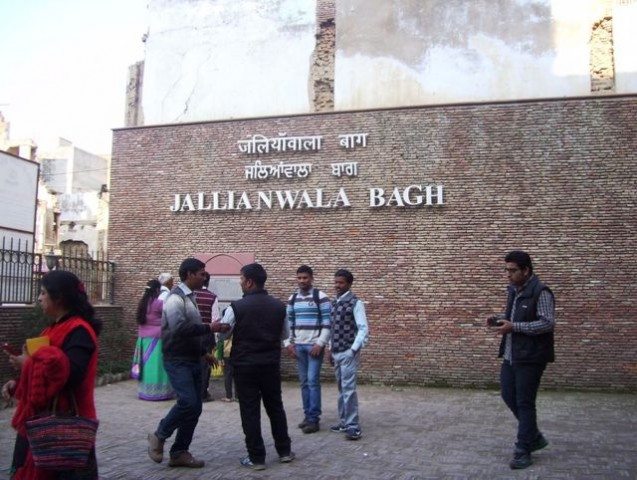 Some tears came out from my eyes, just thought how unemotional and cruel British were. Just remember a scene from the movie ‘Gandhi’, British police open fired, people jump on a well inside the Bagh and a little girl crying with dead body surrounded her. We cried after that movie scene, but imagine the worst experienced by them in real life.

After visiting Jallianwala Bagh, we had shopping at local market and headed back to our hotel and call-off our day.

Info in order to visit Amritsar and Wagha:
Amritsar is well connected by train, road and air. You can take Delhi as a base camp if you want to visit from other part of India. Various trains are running in between Delhi-Amritsar and other cities of India. Visit www.indianrail.gov.in for more info. Amritsar is well connected by bus from Delhi/Chandigarh. Direct flights are available in between Delhi and Amritsar. You can opt any of the mode of travel. There are some more places to visit within Amritsar and nearby area (we didn’t visited other places due to shortage of time). Google search have enough info for Amritsar.

Some of suggestion from my side:
1. Avoid extreme winter and summer. Winter may go below 1’C and in summer you may face 45’C and heavy raining day or season.
2. Try to visit Golden temple in the night if you have time and option. Night view is very beautiful.
3. Visit local market near town gate, don’t buy near golden temple. They are almost double in price than Town gate market.
4. Reach Wagha before 3 o’clock; otherwise you may not get option to seat in chair/balcony.

A trip to Amritsar was last modified: December 6th, 2021 by Anjan