We are always on tight schedules when we go to our hometown. Still we have always visited my brother-in-law in Rajsamand. They are perfect hosts and know our weakness very well. Every time we crib about our short visit, they always put forth some wonderful opportunity of visiting an interesting remote place, which we just cannot resist!

Their generosity has pampered us and made us a schnorrer. So true to this noun, meaning “a person who habitually takes advantage of other’s generosity often through an entitlement”, this time we put forth the condition that we would visit them only if they promise to take us to an agricultural farm. Being nice hosts they happily agreed.

Rachit was keenly interested to visit a farm since long. He always imagined and asked us how the tomatoes, brinjal … grow on plants. Are they so big and red from beginning or what! We also wanted Rachit to appreciate the bounty of fruits and vegetables Mother Nature has bestowed upon us and to avoid the notion that Mother Dairy grows fruits and vegetables in its factory. 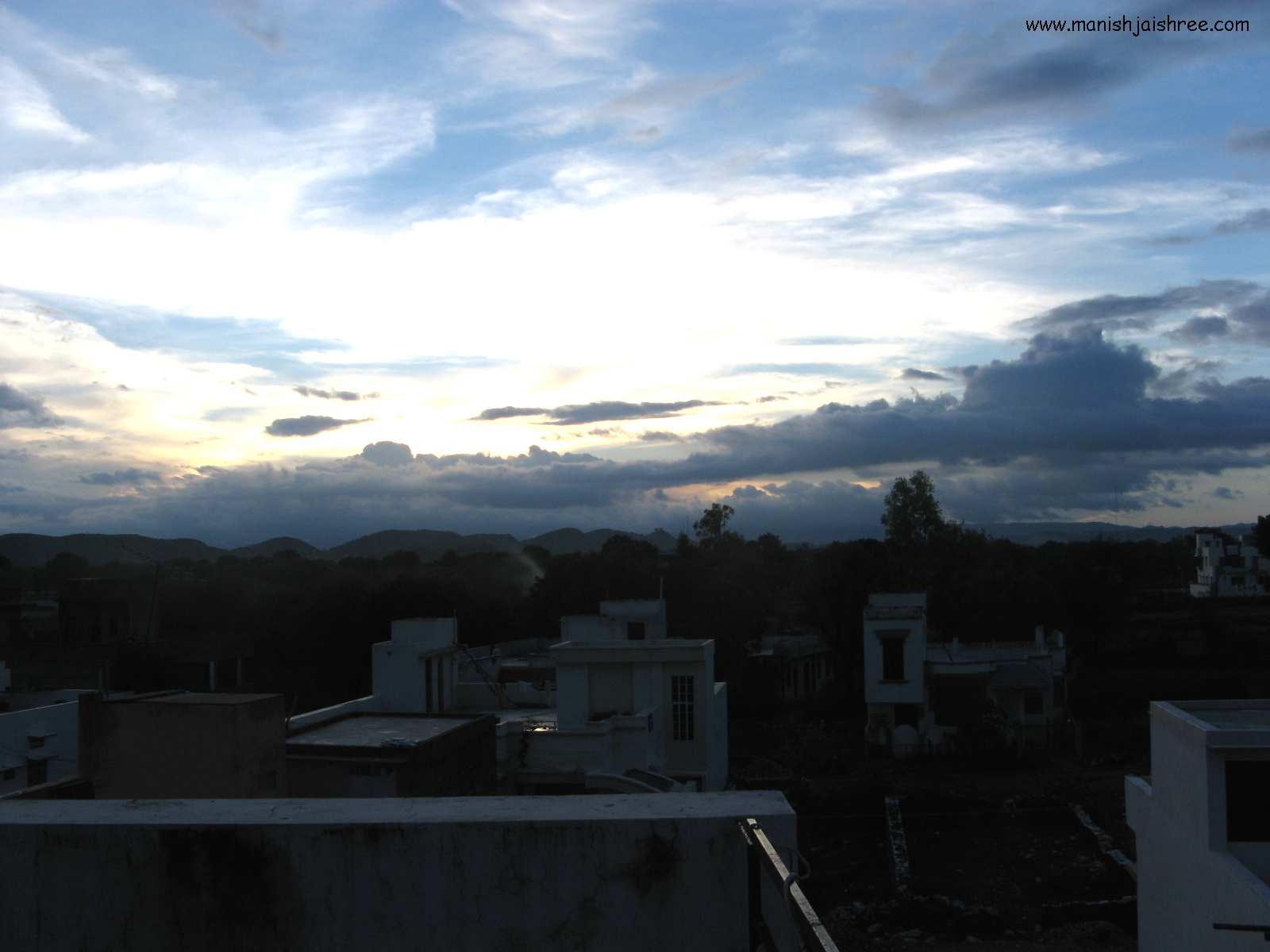 A cloudy day in Rajasamand

Rajsamand is a small town located around 60 km from Udaipur and is now a full-fledged district of Rajasthan. The town has got its name from Rajsamand lake around which it is situated. This is an artificial lake created in the 17th century by Rana Raj Singh of Mewar. The area around this town is very rich in marble, granite and other varieties of precious stones. Most of the people here are engaged in mining related work. This business has made many of them very rich. If good quality marble is found under someone’s land in this region then that land becomes a gold mine for him.

Money is always a double-edged sword. It has virtues, but easy money has vices too.

Indiscriminate mining and mismanagement of slurry are the main issues that have caused serious ecological imbalances in the region. The lake that was rarely empty before, rarely gets filled to its capacity in recent years. All the catchments area of the lake and the paths through which rainwater made its way to the lake are blocked with the dump of marble slurry.

Many of these mine owners have invested their fortunes to buy big farms. As they were farmers for generations this investment suits their basic skills. One of my brother-in-law’s client owns around 70-80 beeghas of farm. When we requested him that we would like to visit the farm, he happily agreed. 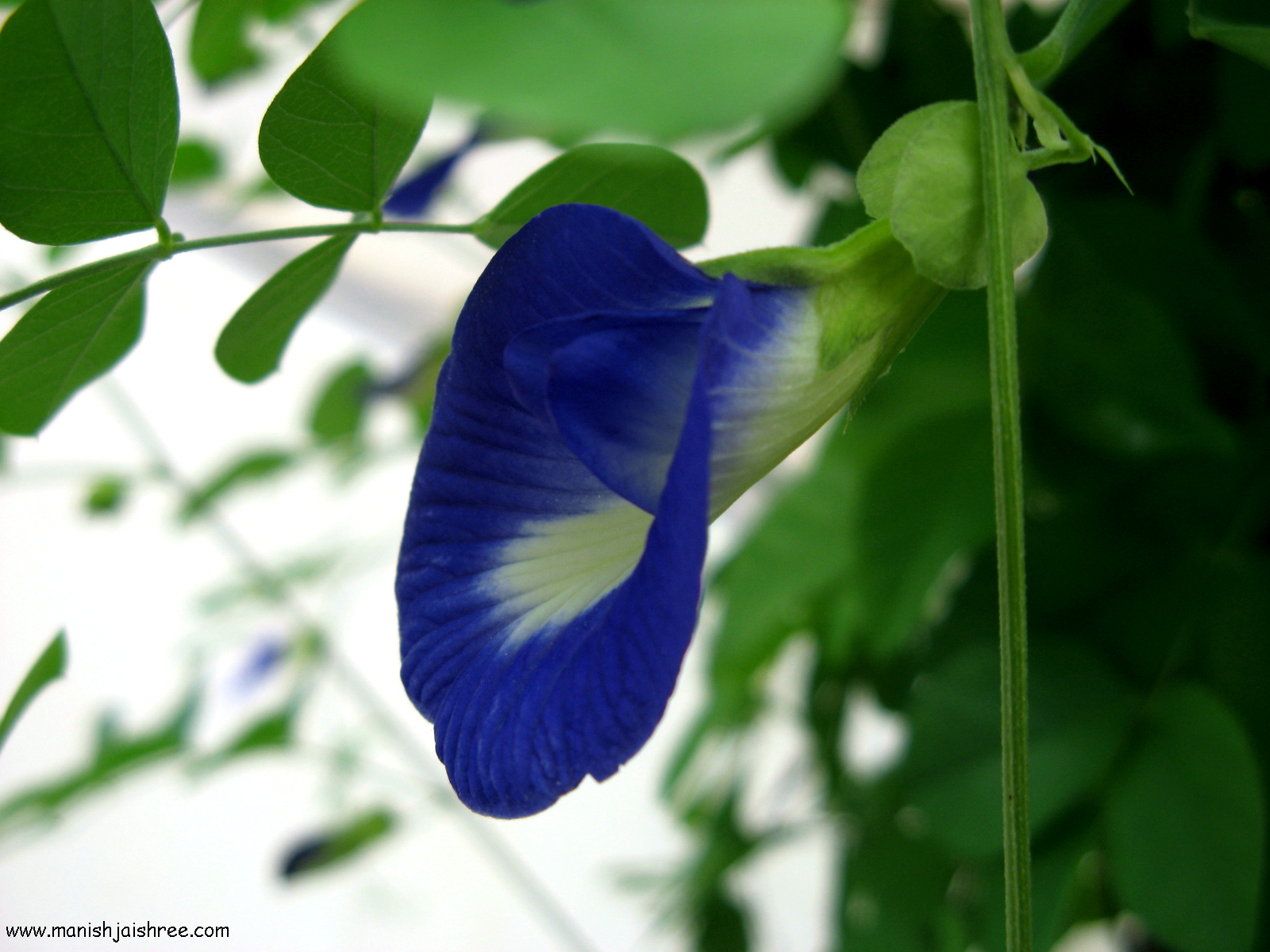 We reached Rajsamand with high hopes of visiting the farm. The client sent his son to take us to his farm. When the gates of the farm were opened a whole new world appeared in front of us. It was a big farm full of magical berry along with Lemon. The Magical Berry with its sour and tangy taste is an excellent source of vitamin C. One fruit of it is equivalent to two oranges. Any guesses about this magical berry?

Yes, I am talking about amla. The fruit that boosts immunity, slows ageing, restores vitality and rejuvenates all bodily systems was, at that moment, redefining our sense of beauty too! 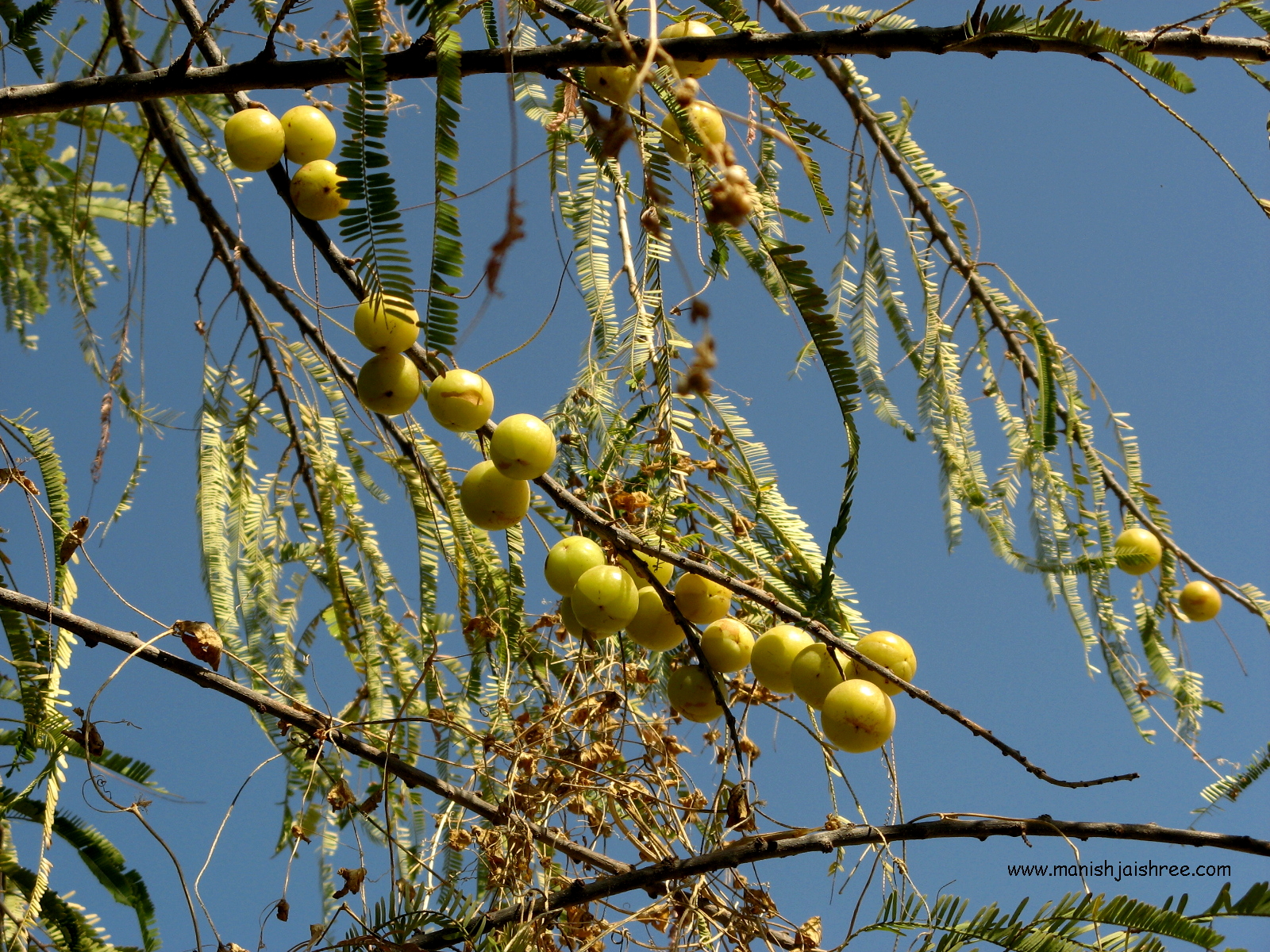 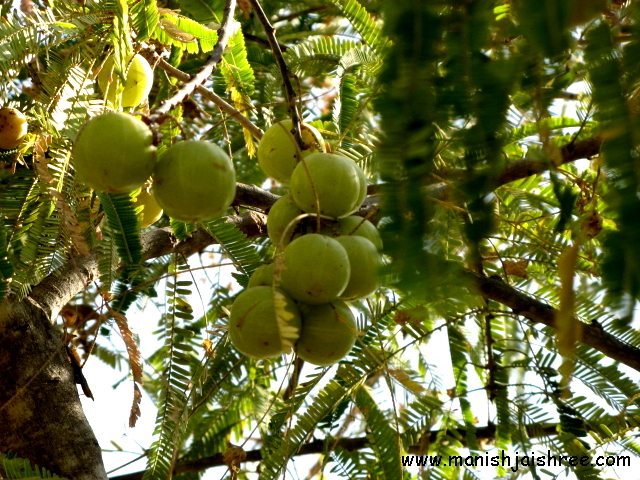 Another Bunch of Amla

We walked in the green and tranquil surroundings of the farm enjoying the sight of trees laden with overwhelming crop of amla and lemon. Our host told us that they have given a contract to collect amla from their farm for around Rs 12 Lacs. The kids started picking Lemon – amla and also began competing with each other over who plucks more. They were enjoying it so much that they refused to move ahead till all of them had their hands and pockets full. 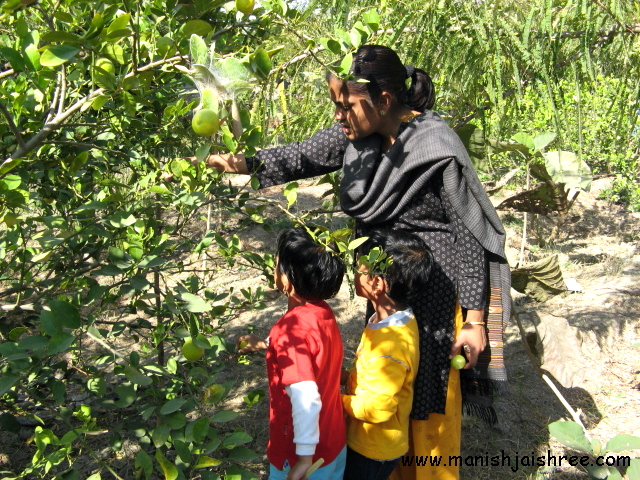 Jaishree teaching kids how to pluck lemons without hurting fingers 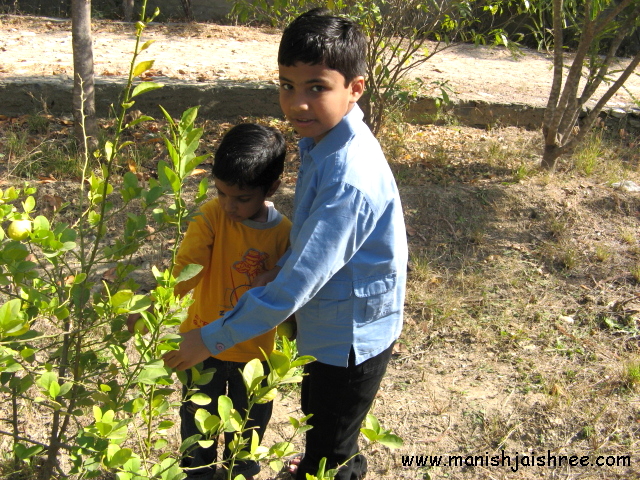 Our host took us to the terrace where amla was being dried and explained us that the amla that was not sold fresh was dried and later on sold as dried-amla or mixed in amla candies and churan. In amla, vitamin C is retained in both fresh and dried form. Vitamin C is heat sensitive and gets destroyed in processing, however this fruit contains special chemical substance that prevents the oxidation of vitamins in it and minimizes its losses. 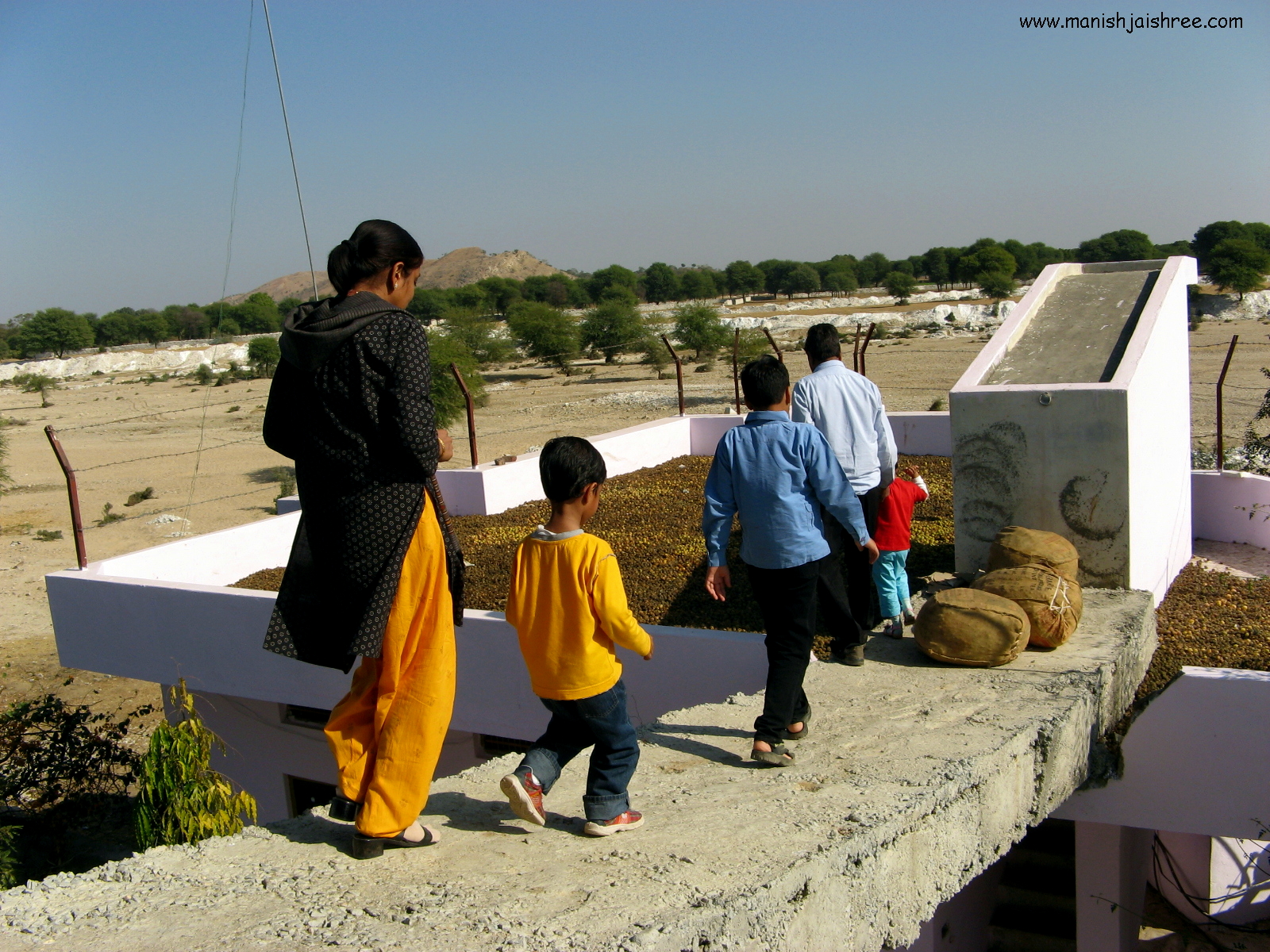 When we were coming down from the terrace we noticed a deep well in the corner. Pigeons were resting inside protecting themselves from the heat outside. That was the first well that Rachit had ever seen. Now it was easier for him to relate with the story of “Lion and Rabbit”. Peeping in these deep wells still increases my heartbeat. When I was a kid, there was an abandoned well between my school and my home. That well used to generate a curious awe in my friends and me. We used to shout there sometimes listening to our echoes, or used to throw stones listening to the splashing chhapaak. Sometimes I also used to get an opportunity to fetch water from a well. As long as the bucket remained immersed in water, it felt light and then there was sudden load on the hands immediately as it came out of the water. My mind tells me that it was due to buoyant force and my heart says that these scientific theorems and laws have taken the fun out of playful observations and feelings.

Other fruits that we noticed growing in the farm were “cheeku” (sapodilla), guava and banana. 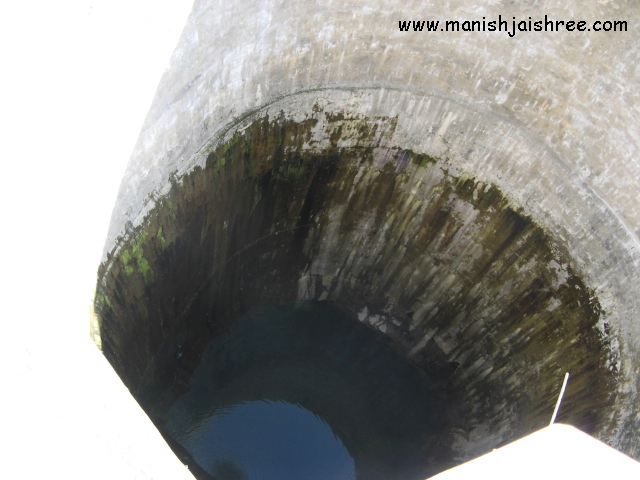 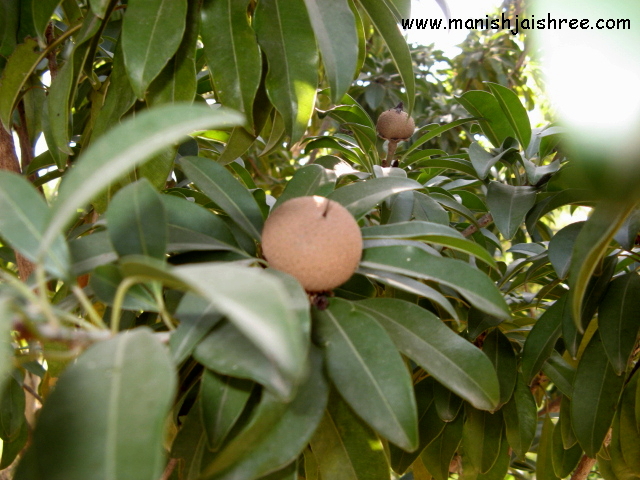 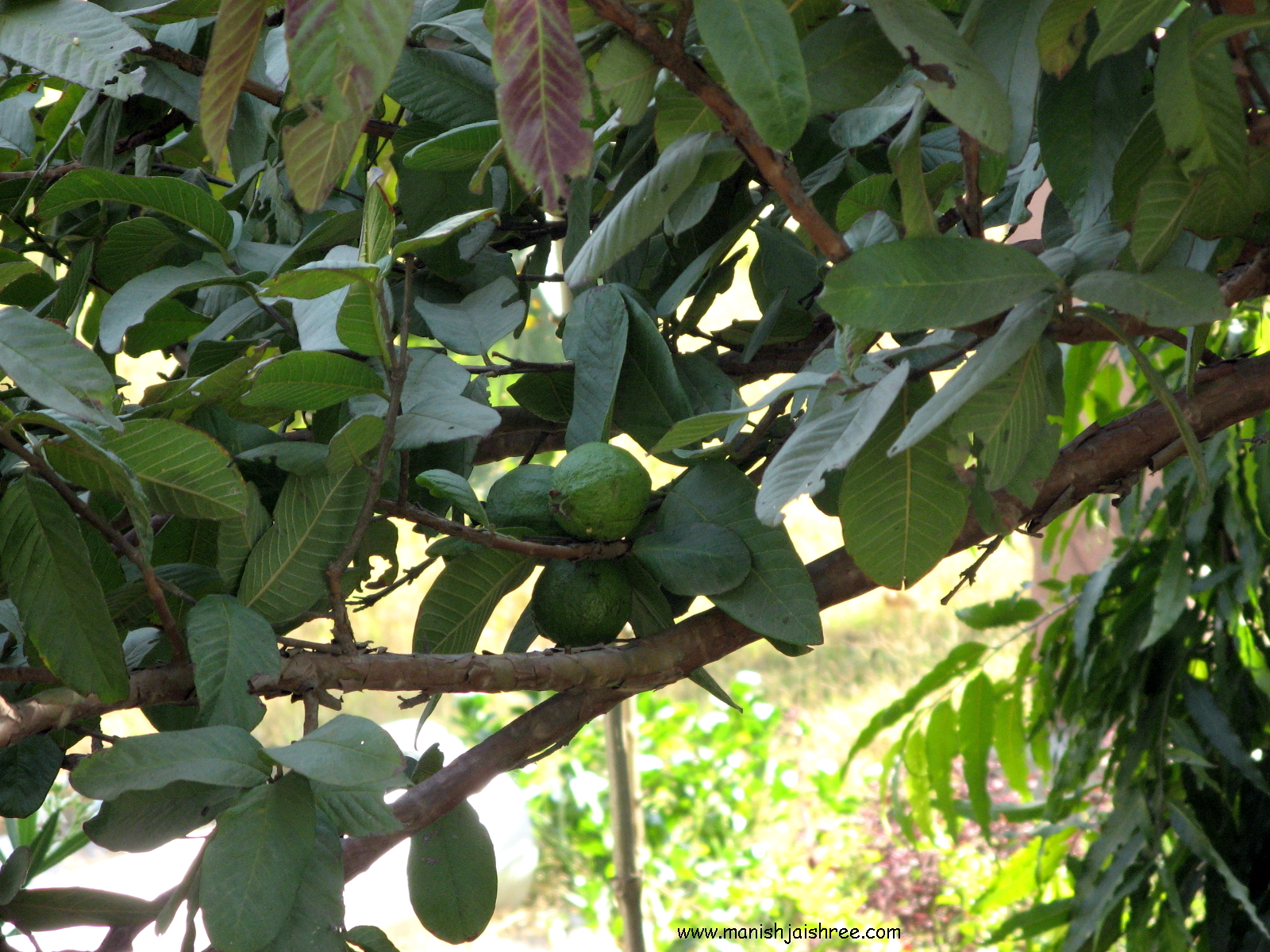 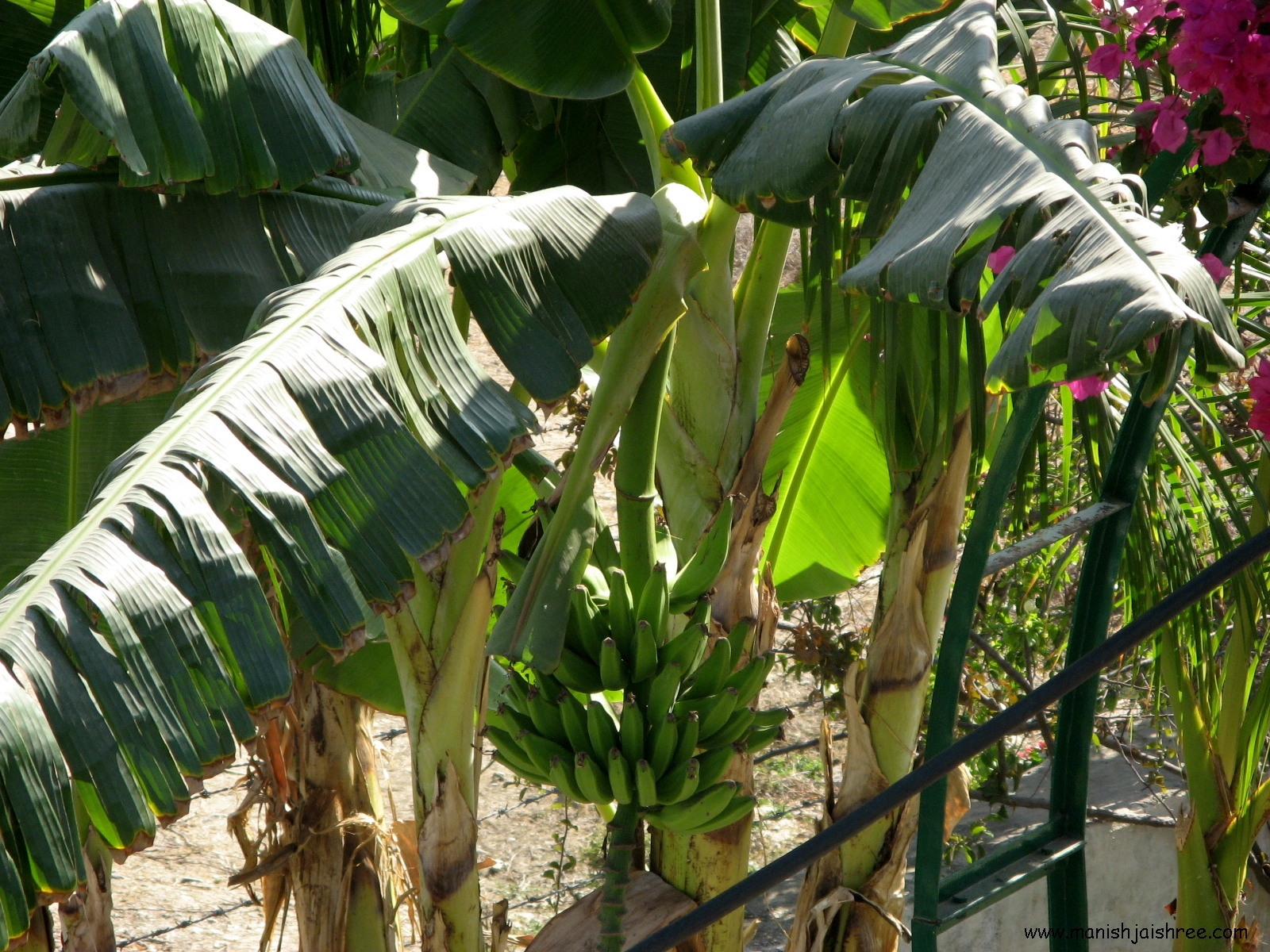 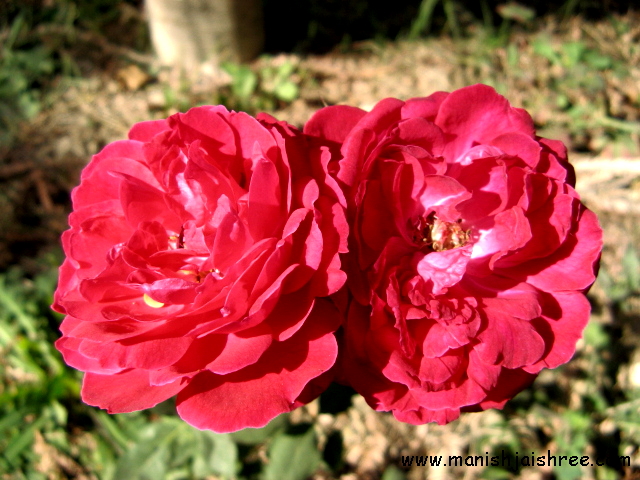 Presence of these two roses in the green background confirms that though our brain takes most of the decisions, but heart is also able to command some decisions for it. What else can be the reason behind these solitary roses in a farm full of cash rich crop! After roaming around in the farm for some time our host invited us to a guestroom on the first floor for snacks. An almond tree surrounded the terrace and the bird’s eye view of the surrounding greenery was fantabulous. 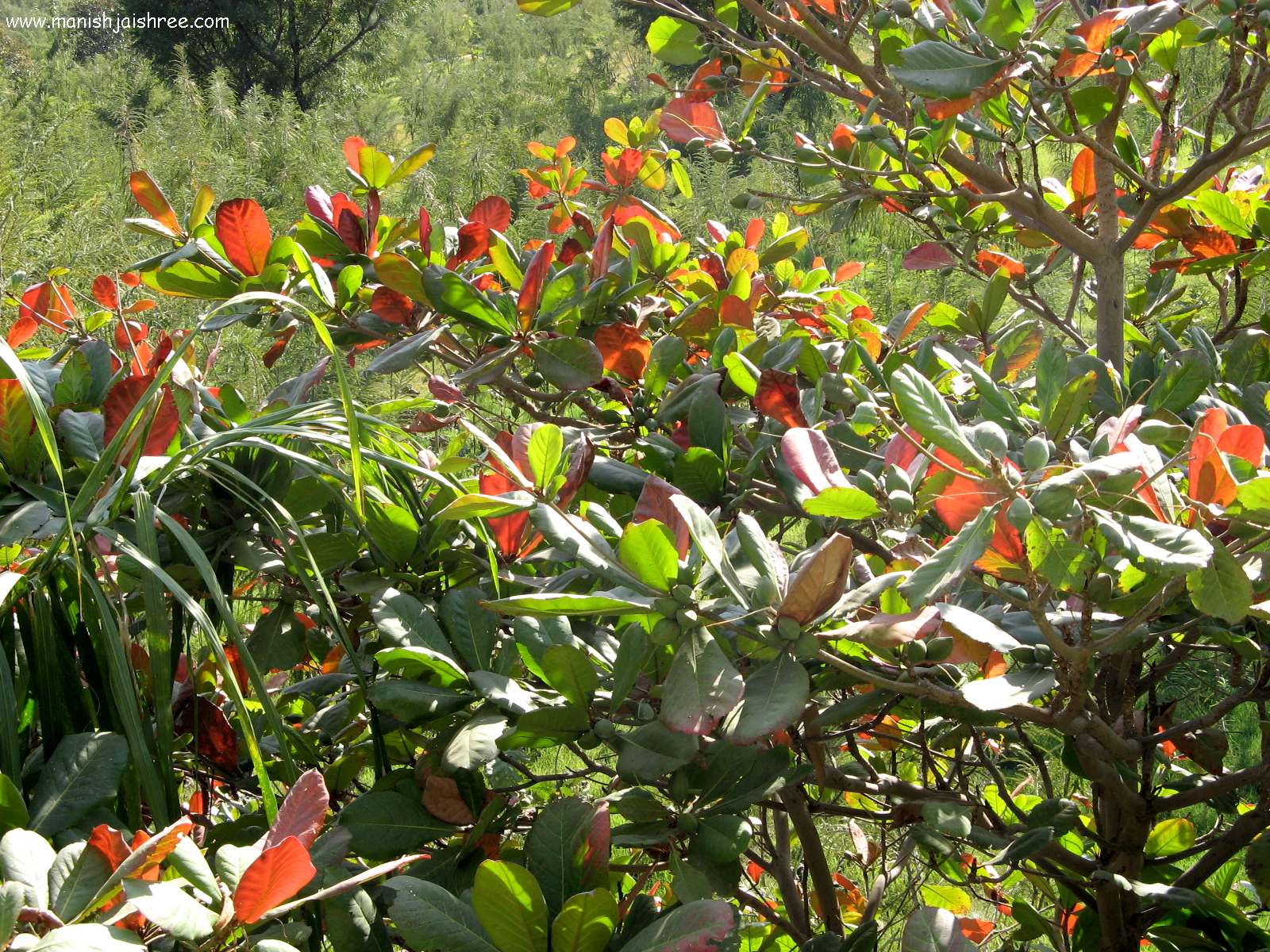 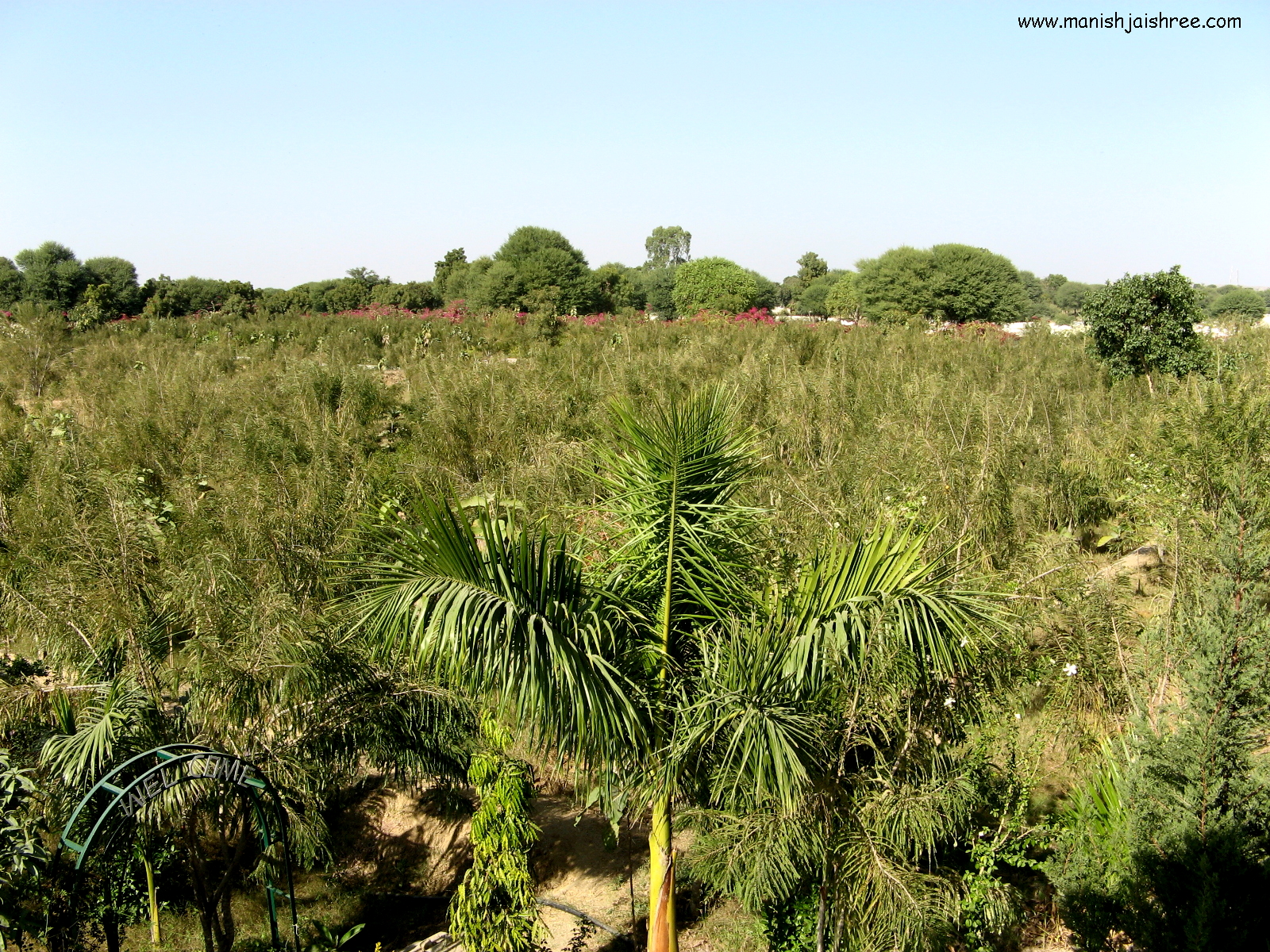 Bird’s eye view of the farm

The farm had a rustic surrounding. As we came out, kids discovered that there was a baby hillock waiting to be conquered. We believe in the tag line of Surf “दाग अच्छे हैं” (stains are good) , so there was no question of stopping them. The kids were very agile and moved over it swiftly and effortlessly. Once on top the smiles lit their faces. As in life, going up is always easier than coming down. At such time kids needed experienced helping hands to bring them down unhurt. 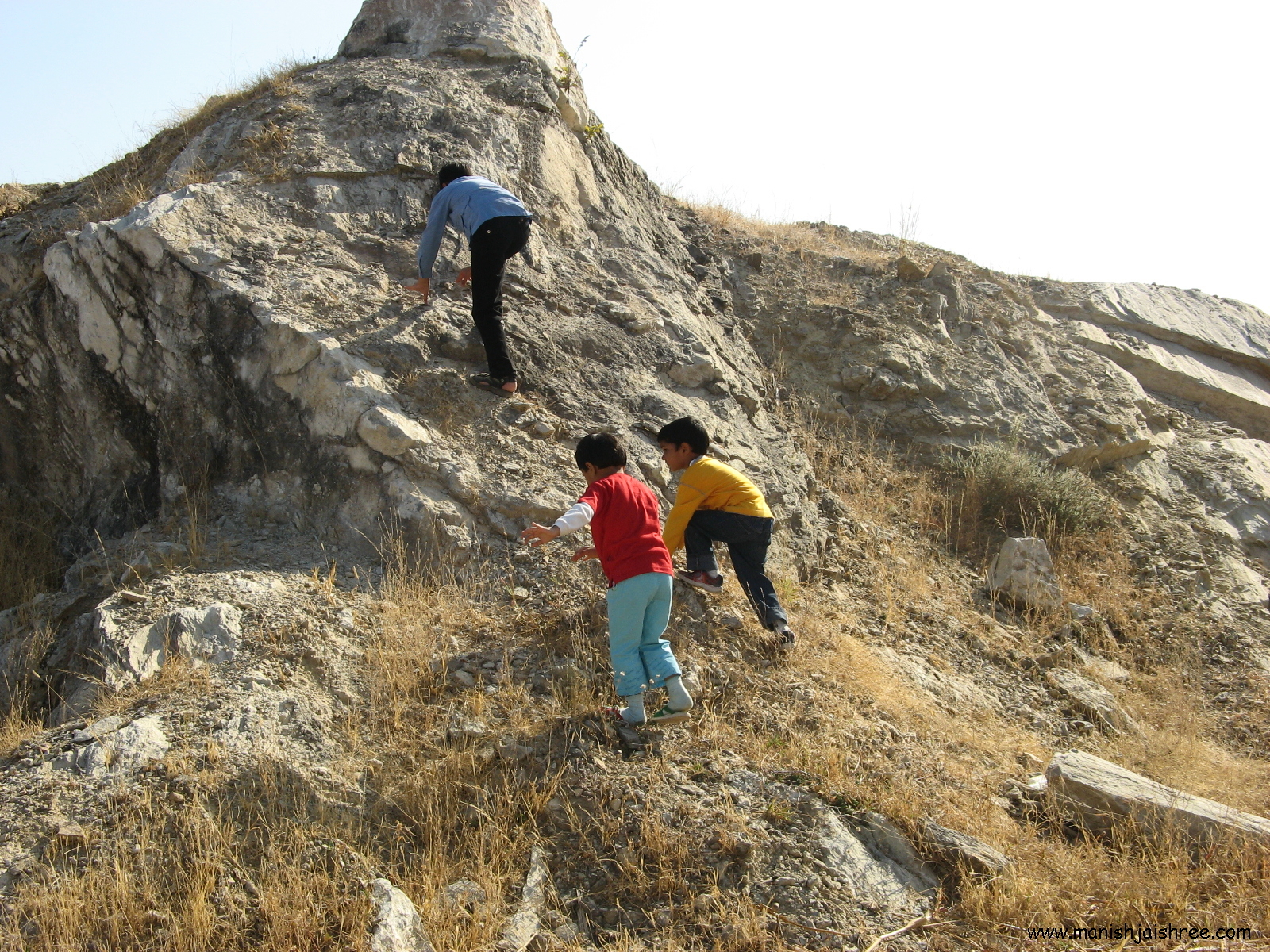 Our generous host gifted us a sack full of amla and lemons. 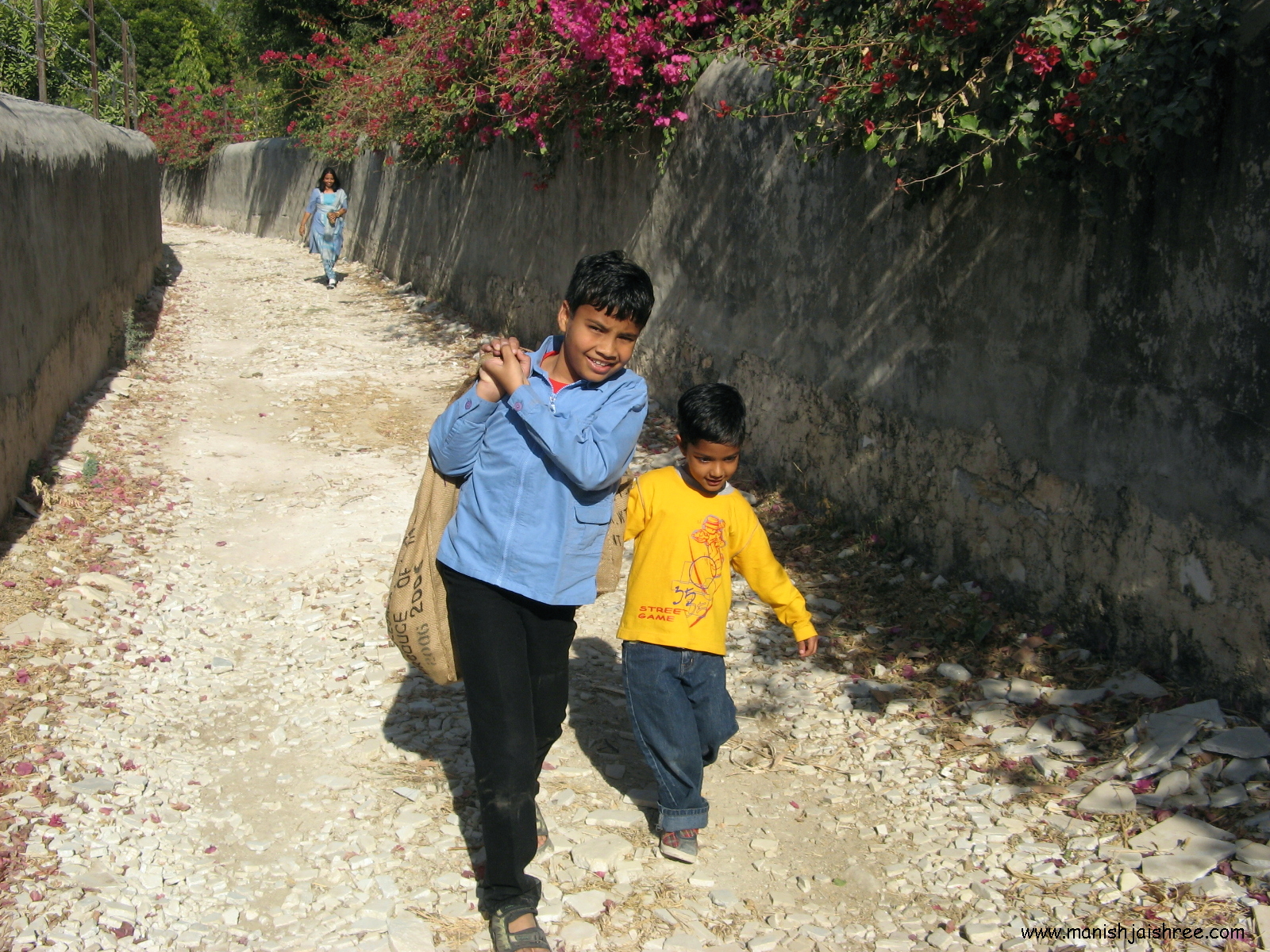 On that day, I was wearing a cargo and by the time we returned all the six pockets of it were full of lemons and amla – Rachit’s proud souvenir of his visit to that farm!

Sidenotes: After our visit to that farm, I am quite confident that agro-tourism could bring next revolution in tourism industry. I dream that if we could develop model villages, villages that are clean, green and safe – along with proper sanitation and comfortable places to stay. They may lure a large number of tourists. That extra income may help in stopping exodus of villagers to the slums of metros.
I am sure; I would like to go to such villages, away from the mundane humdrum of city life, to relax, to roam in the countryside enjoying the sights of various fruits and vegetables grown there and, if possible, to get food cooked from fresh vegetables hand-picked by us.

As much as I am a fan of traveling and seeing places, I did not start traveling solo until about two years ago. People…