While searching for Jaisalmer, Jodhpur and Rajasthan, I came across thousands of stories, information and photos. On our Ghumakkar also, there were some 178 Rajasthan stories along with 40 on Jodhpur and 18 for Jaisalmer alone. That was a number big enough and I was wondering what is the new thing I can offer with my story. Am I going to bore people again with some photos of golden forts? Naaa… I am going to tell you a story about a person from Jaisalmer, who made our travel an experience of a lifetime.

In the month of September (2014), we decided to visit Rajasthan in the year-end. We had finalized our itinerary to visit Jaisalmer, Jodhpur, Ajmer and Pushkar in a single stretch. I had started researching about the places to visit, hotels, mode of travel, etc. When it’s time for hotel booking; I always check public reviews on TripAdvisor. TripAdvisor helped me many times to choose the right hotel. This time also, I had searched for Jaisalmer and other places. There were plenty of Hotels in Jaisalmer; from small, budget, to Five stars. I stopped on a review where nobody talked about the hotel and rooms. Everyone talked about the owner of the hotel and they mentioned him as an ‘ITEM’. Instead of going to a beautiful, well served and well rated hotel, we had decided to book this hotel.

Mr. Polu, fifteen years ago, was an auto driver who helped the tourists around the Jaisalmer town. His warm and helpful nature always made the tourists stay with him. During off-season, one French couple visited Jaisalmer and he chauffeured them. They asked him, what would be his plan for the future? His simple answer was that ‘I want to own and run a hotel’. That couple didn’t buy a property for him, but searched a guest house for him. Gave $2000 as a security deposit for that property and asked Mr.Polu to run that and asked him to carry on his friendly nature. According to him that couple had never come back, but with respect to their request, he never changed his attitude. Within a couple of years back he bought this current property and constructed this hotel. Have you not felt it is a movie type story? Maybe or may not be because this was his version. We don’t know the reality, but he always carries his friendly and helpful attitude.

Now, let’s move the little to Jaisalmer town. We had asked Mr. Polu what we could do, see and where we can eat. We carried all itineraries with us, we just cross checked with him. He said that today was already late, so we could just go to Gadishar lake and enjoy boating and sunset. After that, we could enjoy Desert cultural museums and puppet show. This time again, he asked an auto to drop us at Gadishar lake and not took any money. We enjoyed the beautiful sunset, boating at the lake. 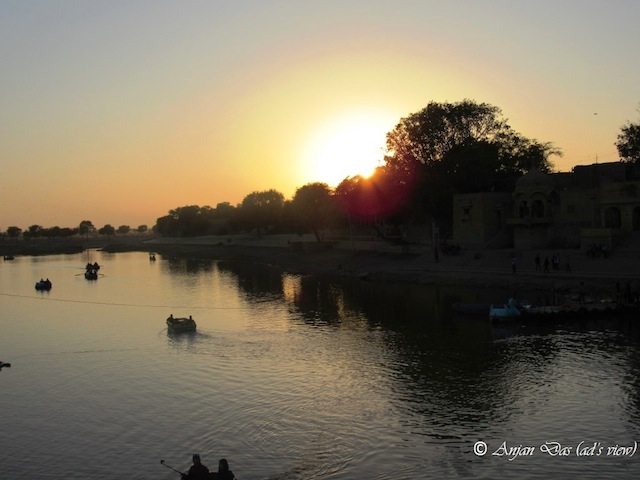 Enjoyed an awesome puppet show at the Desert cultural museum, which is the outcome of a single person’s effort. This legend, Mr. Sharma, devotes all his life and savings to create this exceptional centre for spreading folklore of Rajasthan and Thar.

Next day, we again asked Mr. Polu for the desert safari, Sam sand dunes, etc. and price. He said, I will take you this way and will charge this amount per person. He also requests us to do price enquiry with other tour operators. We dis not want to go with other operators, we said that we will go with him. After breakfast, we moved out to visit ‘Sonar Kila’, which was within walking distance from the hotel. 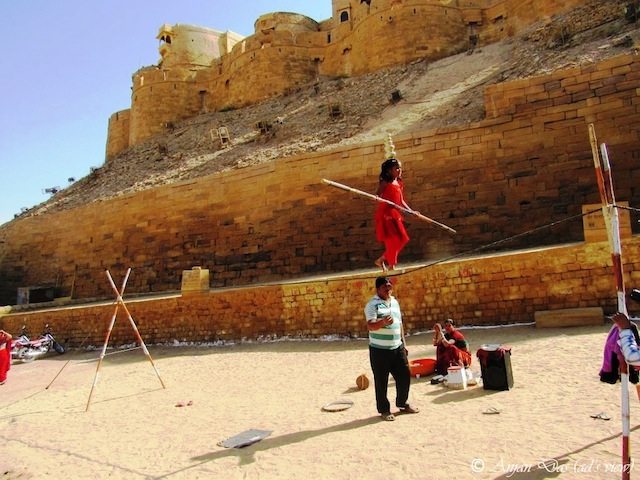 We had a great time within the fort complex and its lovely architecture. We had lunch with pure Rajasthani style and got back to the hotel because we needed to go to the safari at 3PM. We enquired about the Desert safari from other places and we found that Mr. Polu asked us a much lower rate than the other operator. At 3 o’clock, our 3 families headed for desert safari, where we visited ‘Kuldhara’- the abandon village, Khaba fort, the Desert national park and finally camel safari in Sam sand dunes.

On the way to Kuldhara 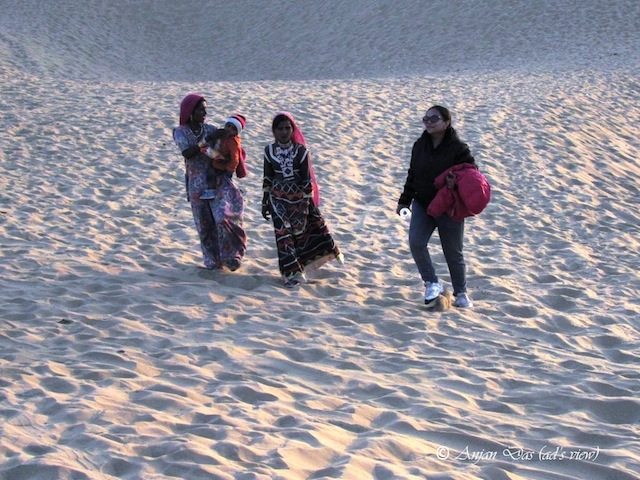 Walking through the desert

We enjoyed a beautiful sunset in Thar desert followed by a cultural show and dinner at the camp. We also came to know that our Mr. Polu also does fire shows. That day the fire show was already done by someone, but we requested Mr. Polu to do the something for us. He agreed and excited us with a beautiful fire show. He is really an awesome guide and a guy.

Our host knew nine foreign languages. Imagine, a class five passed boy learnt several languages with dedication and tourists’ help. His first customer was a group of Koreans. He treated them well, they taught him a bit Korean. His hospitality satisfied the Korean people and with their references, his hotel is packed with Korean tourists. He learned Korean properly, started reading of Korean script and learnt Korean dishes. Now his hotel is famous as a Korean hotel and you can get some of the delicacies from Korea in his menu. In the last 10 years, he learnt Japanese, German, French, Polish, English, etc. We saw his conversation with people from other countries, so we could believe that he really knows those languages. Finally, the day ended with some of hectic walking, camel riding and music.

We had decided to go to the Tanat Mata Mandir next day, which is near to India – Pakistan border. Do you remember the temple, shown in ‘Border’ movie? Nothing happened after all the bombarding from Pakistan? Yes, that is the Temple and people believe the power of this temple. We booked a cab from Mr. Polu again for the Tanat mata mandir, which is 100 Km from Jaisalmer. This time we did not enquire any operator for taxi because Mr. Polu had already won our trust. Even though we found out that, in a tourist place, in the peak season, running on diesel, the cost was lesser than Delhi. Journey to Tanat Mata Mandir was really enjoyable, a beautiful road, desert, clean and no traffic- – 260KM without tiredness. We had visited the battlefield of the Border movie (Langewala), tanker, the recovery truck, etc. and came back to the hotel after a delicious lunch. 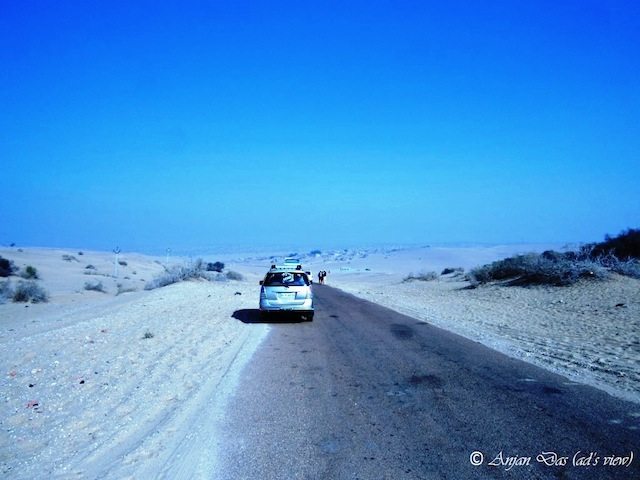 On the way to Tanat Mata mandir 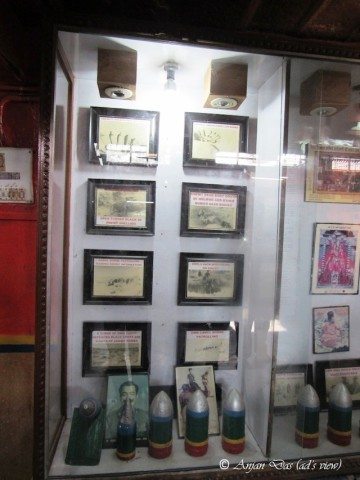 On the way back to Jaisalmer

When we reached the hotel, Mr. Polu had been waiting for us and requested us to visit Patawon ki Haveli, which is the architectural legend of Jaisalmer. He asked the taxi driver to drop us at Patawo ki Haveli. He said that he would pick-up us from there and take to sunset point. Followed by our guide Mr. Polu, we went to Patawon ki Haveli. Patawon ki Haveli is really a marvel of architecture.

As committed, we got a call from Mr. Polu that he was waiting for us at outside. We came out and went to the sunset point. It was on a hill top from where you could see the entire golden fort and Jaisalmer town. Awesome view point. We thoroughly enjoyed the sunset and back to our hotel to end our Jaisalmer trip.

Sonar Kila, the Golden fort from the Sunset Point

Sunset from the Sunset Point

My story and Mr. Polu’s story does not end yet. There were other facets as well. While traveling with a three year old Kid, there are a lot of things you have to follow. They are very fussy about food, the spice level, etc. So, we requested some home food. Mr. Polu requested his wife to prepare some food for us, who stayed on the ground floor of the hotel. He allowed us to prepare food in his hotel kitchen as well. So, we enjoyed the food without any issue. The hotel restaurant is on the top floor. There is a small bookshelf with some foreign language books, which are mainly the leftover book of his tourist guests. Some musical instruments, which Mr. Polu played and enjoyed with us. A multi-facted, multifunction man with varying talents. We really appreciated Mr. Polu’s attitude, hospitality and honesty. In a tourist place, only honesty brings tourists. If you get people like Polu, you will always have a memorable travel. He believes that money does not matter, friendship is what counts. He gets his customers from references. He can earn some more money, but if he does this, he may lose some friends. Next day early morning, we had a train to Jodhpur. Without asking for anything, Mr.Polu dropped us at 5 AM. We thank Mr. Polu for his hospitality and not only carry a beautiful memory of Jaisalmer, but also of a friend with a beautiful heart.

Travel trip: Jaisalmer is a place for everyone’s budget. You can enjoy as per your choice and budget.

Jaisalmer – the city of sand, fort, ruins and a wonderful host was last modified: March 1st, 2022 by Anjan