Our life is normally so hectic and at a professional level we always remain so stressed out, that after every now and then we need a break. And the break is normally of the form of visiting or touring places with friends or family, where one can have a total piece of mind, far away from the work stress and pure fun and enjoyment.
One such place in the vicinity of Kolkata, which can provide an environment exactly similar to this, is the famous Digha beach. Situated almost around 200 KM from Kolkata and around 25 KM from the Mandarmoni beach, Digha is a beauty in its own.
February 2008, and it was exactly such kind of a stressed out situation for me. Additionally my grandmother was also in town, with a big desire to visit Digha. So, we thought of visiting Digha on a weekend. And as it turned, it was an absolutely wonderful weekend.

My uncle had already booked the hotel Sea Hawks (and what a wonderful sea-side hotel it was) very early and we decided for an overnight stay over there in Digha.
I have had two travels to Digha; this one was by train and the other one by road. So I will provide a brief on the road review too.

Note 1: Please check for the updated highway numbers as per the re-numbering of the National Highways across India, wherever you see NH in this article.
Note2: Google Maps is the best resource for guidance on highways. Take the most of the usage of Google Maps for highways, it’s just wonderful.
Here is a high level map of the driving direction. 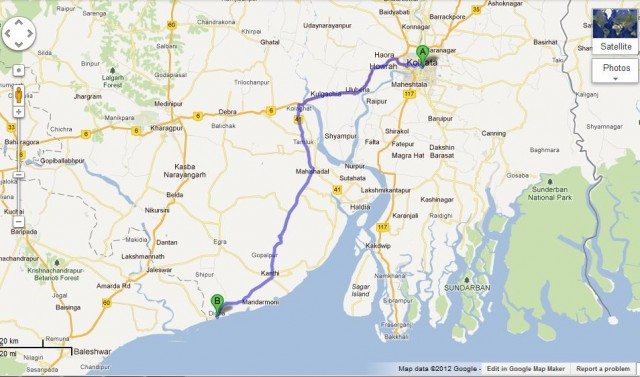 Digha is a sea-side resort and town is once again situated around 200 KM from Kolkata and the route to Digha is almost same as that of Mandarmoni (as I provided in my post for Mandarmoni-refer to the link below) except the last 25-30 KM.
Refer too: https://www.ghumakkar.com/2012/04/13/from-kolkata-to-mandarmoni-beach-december-2009-road-review-and-trip-report/
Keep on continuing in the road to Mandarmoni, till one reaches Chawlkhola in the Digha Contai road. From Chawlkhola, instead of turning left, keep moving ahead for around 25 KM and you will end up reaching Digha.
For more information on directions, one can search his appropriated road by putting his criteria in Google maps:

The way back to Kolkata is the same. If you are planning to return in the same day evening, be a bit careful as it becomes dark and in the 2-lane state highways, the state transport buses come towards you in full speed and in high beams. Keep your eyes wide open. The same road (from NH6 onwards) will straight lead to Vidyasagar Setu and down into Kolkata.
*** Basic Amenities/food hubs on-way just as I mentioned in the Mandarmoni article, follow up with that.
Refer to: https://www.ghumakkar.com/2012/04/13/from-kolkata-to-mandarmoni-beach-december-2009-road-review-and-trip-report/
Toll Taxes:
On way through NH 6, there are not many toll plazas. The first one would be meager 10 Rs of Vidyasagar Setu and then 2-3 (much less compared to NH 2 as I mentioned in the other post) toll plazas with toll taxes ranging from 25-70 rs. Advisable to keep the toll receipts with you.

For our first visit, we decided to go to Digha by Train. As mentioned we had our reservation in Shalimar Digha Superfast Tamralipta Express, those days used to start from Shalimar station (recently heard it starts from Howrah junction now), it’s the same train that comes back in the afternoon. We booked a return ticket for the train the next day. We decided to leave for the station early in the morning, and accordingly reached the Shalimar station by around 8:00 AM. The train scheduled to depart at 8:45, was on time and we also boarded the train well in time. Had a cup of tea in the station and the train started exactly on 8:45. It’s a sitting journey and the journey through the train is also quite awesome. The train zipping through beautiful Mumbai Road route having a panoramic beauty all through is just awesome. 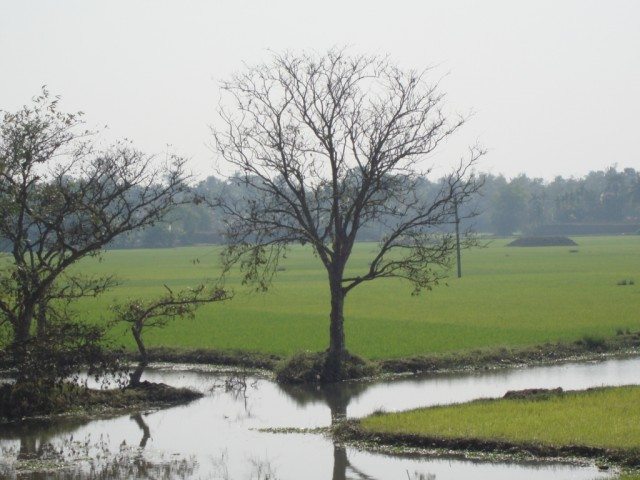 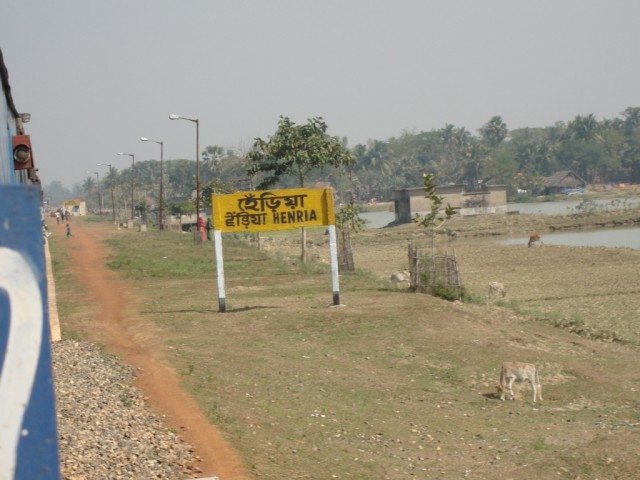 Another Photo taken from train

We reached Digha by around 1:45. The train was late by around 15-20 minutes. Digha is the last station. We immediately took a rickshaw and went to the Hotel Sea Hawk, where we had booked a wonderful dormitory room with a capacity of 6 people. So we had no problem staying overnight. The hotel is also beautiful considering it’s just besides the old Digha beach with a beautiful view of the sea (Bay of Bengal).

Around 2:30 PM we took a break for a lunch, had a rest for around 20-30 minutes and then started with our itinerary.
After completing our Digha journey we caught the same train next day at 2:15 PM for our way back to Kolkata.
Digha in brief
Digha is one of the oldest seaside beach-cum-resort for tourists in West Bengal in the East Midnapore district. Visiting to Digha always allows visiting to the following nearby places:

Known for the beauty of the beach and the special sea-side food hubs, Digha is a wonderful visiting paradise for the visitors. Tourists mainly spot two places, the old Digha beach and the new Digha beach. The old Digha beach is more of for taking a dip in the water and spending a cool and calm time. The new Digha beach is more of a food hub come everything else. New Digha is much much more crowded compared to the old Digha. And as expected we visited both the beaches.
Immediately after lunch, we took a rickshaw and visited the new Digha beach. We spent a nice evening and dark hour out there. Had lovely sea-side special food in there, which included famous fish fries amongst other food. Along with this, New Digha is also a lovely place for shopping. 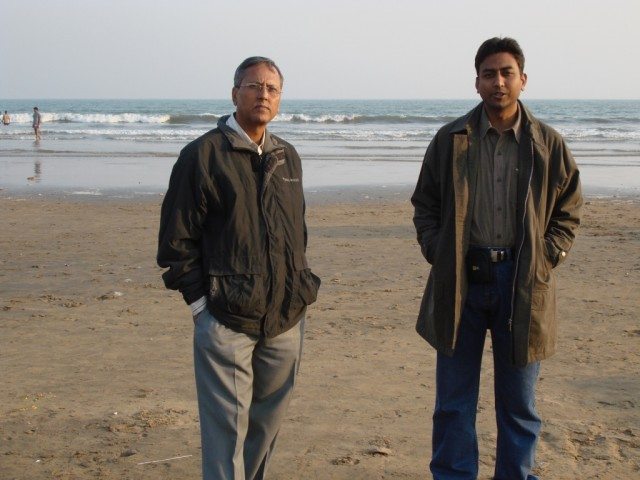 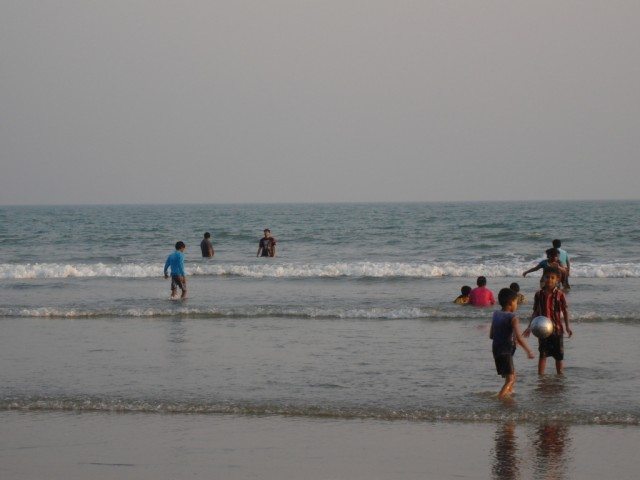 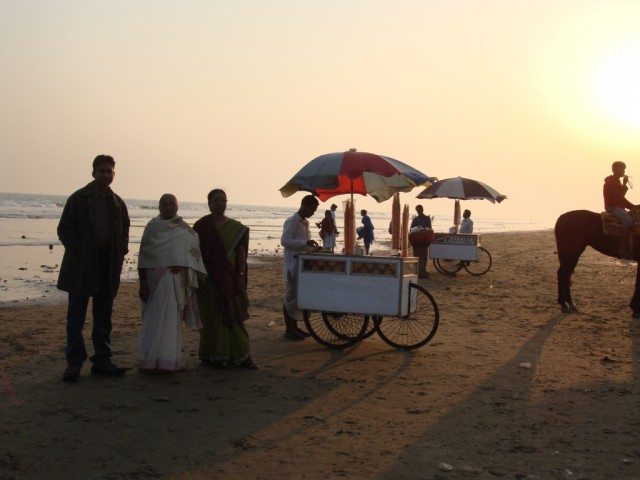 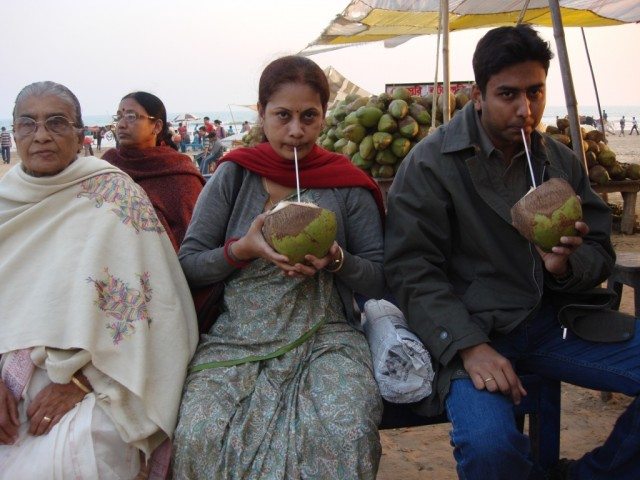 One can also hire a horse or a Khacchar and take round of the entire beach. They are pretty cheap. 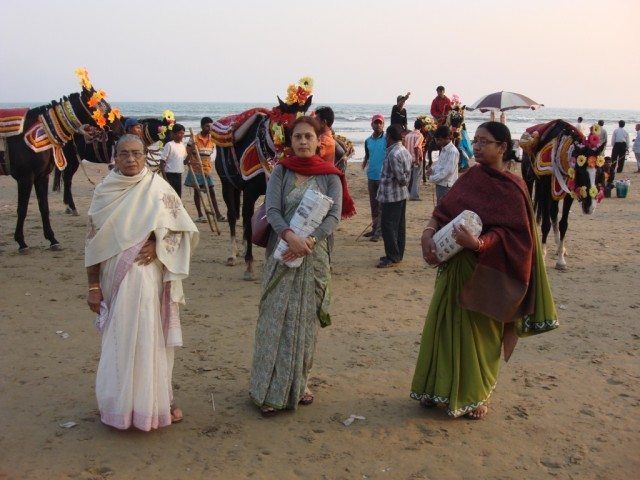 One can also occasionally find red crabs in the beaches of Digha and Mandarmoni. As Manish mentioned in one of his comments, earlier they were in plenty, but now they are rare. We could spot one though.

Photo of a red crab

We also did some shopping and as the sun set, we went in to the beach and sit there watching the lovely Bay of Bengal (in Bengali they call it Banga Sagar), with the tides rising high. Slowly the tide water came in and we finished our visit of the day, making a way back to the hotel. 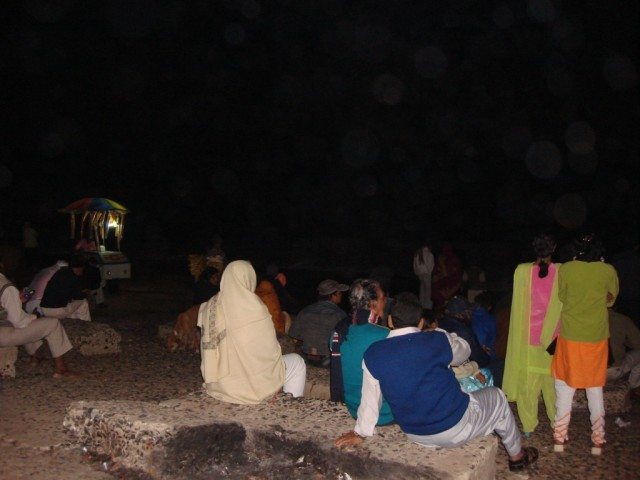 At new Digha during night

Sitting by the beach at night

The sea as seen at night

In the evening we had a good time in the hotel enjoying, gossiping to the fullest. 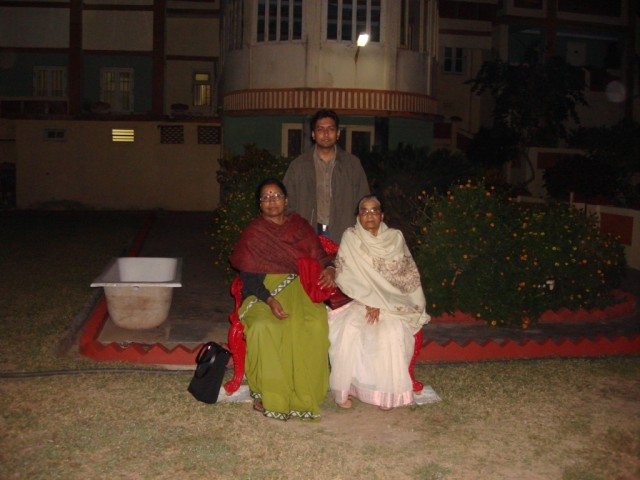 The next day we woke up early around 6:00 AM and walked up down to the old Digha beach to see the early sunrise, which was beautiful. 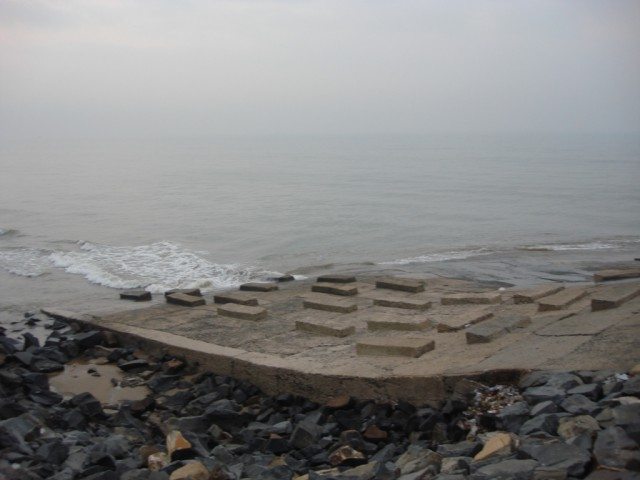 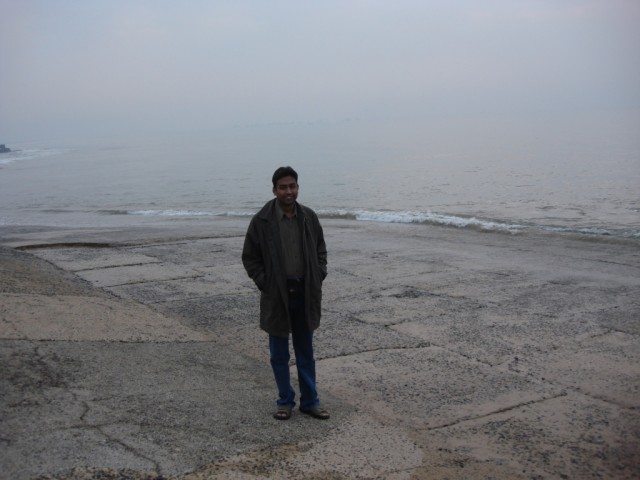 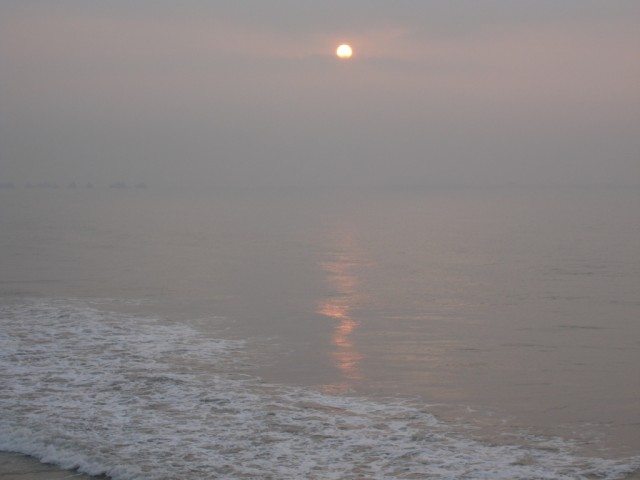 Sunrise at the beach

Around 9:00 AM, we decided to go in for a bath in the sea. Almost spent around 2-3 hours enjoying the beach. It was really a nice time for all of us.

Enjoying at the beach 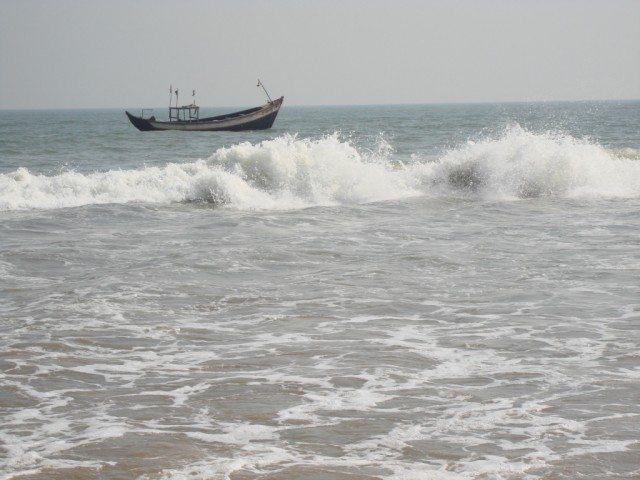 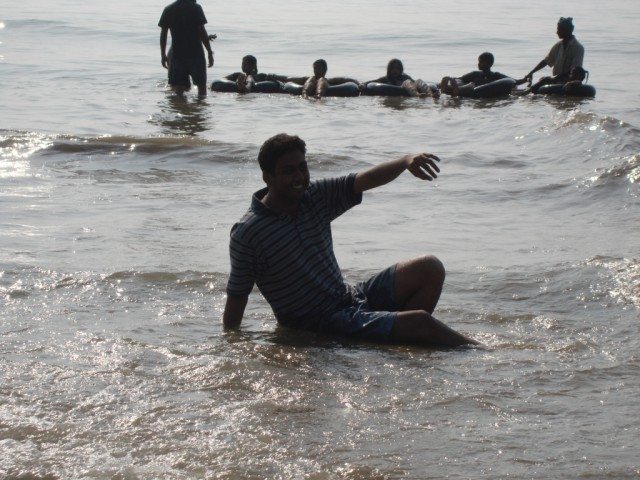 Having a great time at the beach

Coming back to the hotel room and we took shower, spent a nice little time in the lovely hotel courtyard. It was around 1:00 PM, we started our way back to the station to catch the train at 2:15 PM from Digha station. 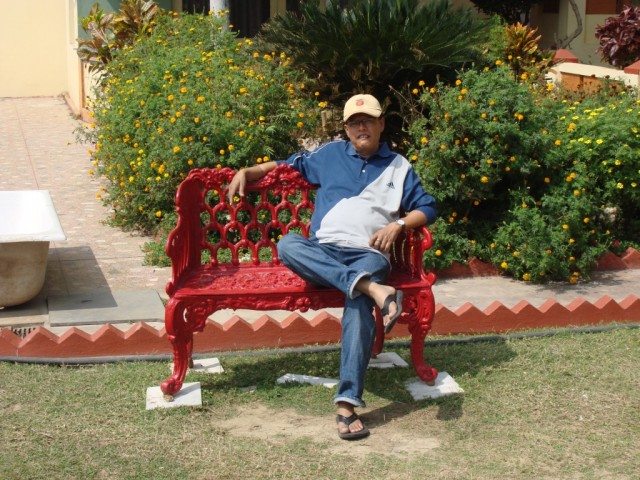 This concluded a nice break from the tough professional life and a truly remarkable visit to one of the lovely beaches in India. Not only the beaches, is Digha as a whole also very beautiful. Walking down the streets of Digha through the green environment is another experience.

A short write-up on Digha was last modified: November 27th, 2020 by Anupam

The entire ambience is soothing and spiritual with kirtans being sung by the gurus sitting inside the temple. Even though the entire journey from the start of the line till one enters the actual temple where the Guru Granth sahib is kept and Gurbani is recited takes about three hours, thousands of people from all castes, creeds and ethnicities throng the Golden temple every day. The temple is open all through the day and night except from 12am to 3pm when the routine cleaning takes place. Awaiting their turns to enter the holy chamber the “Ekonkar” mantra is chanted by all the devotees. The environment is extremely divine. Despite of the rush, a true believer in God can easily connect with the creator here. The actual darshan is even more mystical. One feels as if one has attained the ultimate peace.