A Day in Sintra (Portugal) 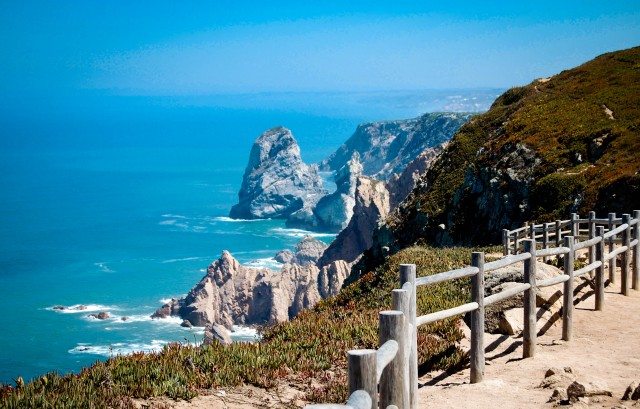 The Atlantic Coast near Sintra

An offshoot of the trip to Lisbon, one can easily spend 2-3 days marveling at the enormous palaces, forts, castles, and much more that Sintra is. Located about 30 km west of Lisbon, the trains that take you from the Rossio station in Lisbon to Sintra are frequent (every 15-20 minutes), cheap (was free with my Lisboa card), and extremely convenient. Sintra is a UNESCO World Heritage Site, its cityscape dominated by many mountains, palaces, and forts.

The two must visits I read about while planning the trip were the Moorish Castle, and the Pena Palace, an embodiment of a Disney-like palace. One can have a spectacular view of the entire city and the ocean from both these landmarks. There are many more palaces to visit, one of them being the Royal Sintra National Palace, characterized by the two inverted cone-like structures.

My journey to Sintra was very eventful, to say the least. I could spot the colorful Pena Palace right from the train, even before I had reached Sintra. I had originally planned to take the bus from the Sintra station and visit as many palaces and castles as I could. However, I had read about a place called Azenhas do Mar, a small fishing village by the Atlantic located a few miles off Sintra that seemed breathtakingly beautiful.

The Westernmost Point of Continental Europe

I started to wish I could visit that village, even if for a while. As a tourist who is extremely interested in photography, the village looked breathtaking. However, here were a few problems. Public transportation to Azenhas do Mar was not that great, and it could take me hours waiting for a bus. I had already caught a cold, and was beginning to experience body aches and fever. I could take the bus to all the palaces and castles, and that would be my trip to Sintra.

However, something impulsive, something that defies logic worked in me at the Sintra station. I went to the tourist office for a map, asking how I could get to that village. It seemed it was not that far, probably a 20 minute cab ride, but it would take hours to take the bus and come back. I stepped out of the tourist office and crossed the road to a pharmacy store. The pharmacist at the store gave me some strong medicines that would see me through the day.

Then I hailed a cab, out of sheer impulse, and showed him my map. Since he spoke no English, I pointed to the map using my finger, indicating something to the effect of, “I am here, I want to go there, how much?” He seemed to understand what I meant, for he showed me 10-15 euro using his fingers. I hopped in to the cab.

It was one of the best impulsive decisions I made. The picture below will tell you why.

I hung out for a while at Azenhas Do Mar, basking in the beauty of the sight that Google images had done little justice to. I kept marveling at the quaintness of the village as the waves from the Atlantic lapped against the shore. It was an unusual combination of art created by nature and man. The little white houses with orange tiled roofs looked like they were sculpted in the hill against the backdrop of the blue ocean.

From Azenhas do Mar, I next visited the Cabo da Roca, also known for being the westernmost point of mainland Portugal as well as continental Europe. Like the 16th century Portuguese poet had rightly said, this is “Where the land ends and the sea begins”.

The cape is as scenic as the land-ocean confluence can be, with cliffs jutting out off blue waters. On the cape stands a lighthouse and a crucifix monument, both providing excellent photographic opportunities against the backdrop of the ocean. The hike is barely exhausting.

The view is breathtaking. For a nominal price, the people at the tourist information office can even have your name inscribed on a certificate that says you have been to the westernmost point of continental Europe. A nice souvenir to have from an amazing trip. 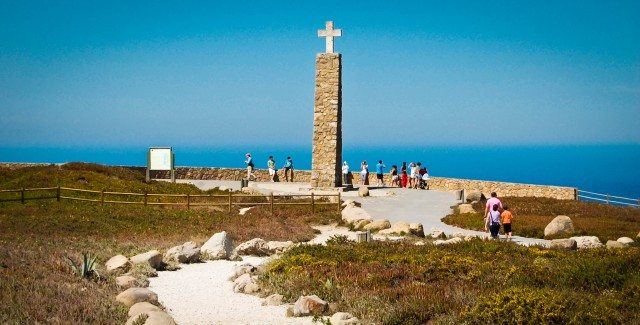 It took me a while to get back to the main city of Sintra, since Cabo da Roca is somewhat on the outskirts and bus connectivity is hourly. The next destination was Pena Palace.

The Pena National Palace, popularly known as the Pena Palace, is a UNESCO World Heritage Site and one of the seven wonders of Portugal. It stands on a hill above Sintra, prominently visible from many places. It is a national monument which looks like a palace out of the Disney movies.

Surrounding it is the Pena Park, a huge and beautifully done forested area that would remind you of the woods and the forests you read about during the Golden Age that Shakespeare wrote about. The narrow and labyrinthine roads of the forest lead you to the palace, and it is somewhat of a hike. The palace has a spectacular view of the city below, extending up to the ocean.

A bus ticket valid for a day (approx 7 Euro, bus number 434) will get you from the Sintra train station to the various attractions like Pena Palace and Moorish Castle. It is a steep road, and despite my initial conviction about hiking it, I was glad I did not do it.

Inside the Pena Palace, you can spend a few hours marveling at the architecture, the colorfulness, the look of the fantasy Disney palace built in red, yellow, and grey, its intricate and ornate work, taking many pictures that would remain as nostalgic memories of a wondrous vacation for the years to come. There is an amazing view of the Moorish Castle from the terrace of the Pena Palace, and vice-versa. One can spend a leisurely afternoon in the gardens of the Pena Park. You can easily plan around 2-3 hours for Pena Palace alone. 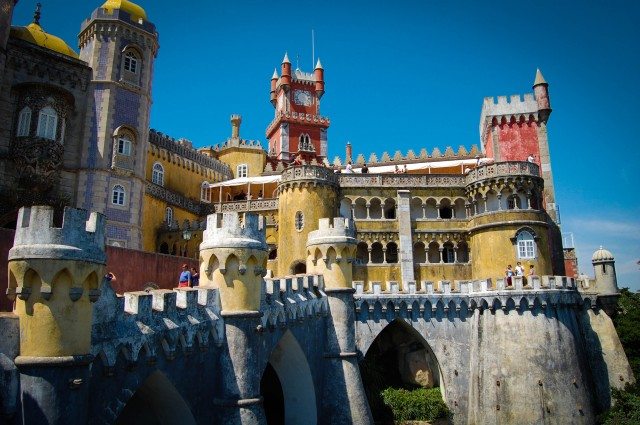 The bus that takes you to Pena Palace also takes you to Moorish Castle through the labyrinthine roads with sharp turns and uphill drives. The castle stands in ruins, looking every bit as spectacular as one would expect. Classified as a National Monument, the hilltop location of this sentinel provides amazing panoramic views of the Pena Palace and the city of Sintra below.

This is another place you can stand and marvel at, reveling in all the rich history that has unfolded for centuries here, of the generations of the evolution of history and culture this place has witnessed. One can easily plan to spend at least 2-3 hours here, not knowing how time would fly, leaving you wanting for more.

There are many other places you can visit in Sintra, including the Sintra National Palace, Capuchos Monastery (Convento dos Capuchos), Monserrate Park (Parque de Monserrate), Regaleira Palace and Gardens (Quinta da Regaleira e Jardins), and a lot more. How much you see depends on the amount of time and the enthusiasm you have. 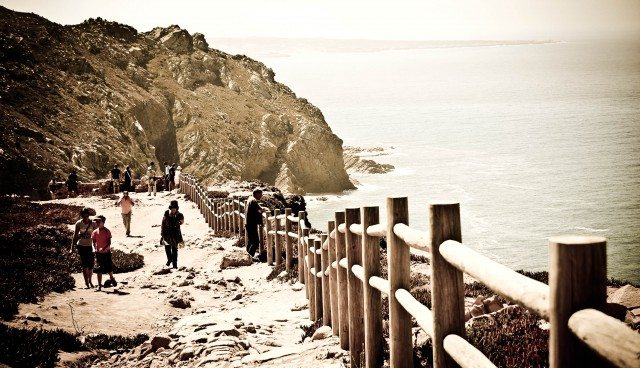 You must definitely buy the Lisboa Card (valid for 1, 2, or 3 days) that offers free entry to many attractions, and discounted rates for others. Transportation is free when using a Lisboa card in the metro, public buses, trams, and elevators. It comes with a guide that has information on all the monuments, palaces, towers, and castles you can visit.

The depiction of a newt, symbolizing the allegory of creation of the world.

A Day in Sintra was last modified: September 6th, 2020 by Devasmita