We kept this day to go the one of most attractive place at Nairobi – the Nairobi National Park (http://www.kws.org/parks/parks_reserves/NANP.html) . But the morning didn’t greet us very promisingly. It was raining furiously. We had our driver arrived and ready to move sharp at 9 as promised. But we were initially jittery looking at the climate.

But our driver Nickson kept on assuring us that the rains here in Nairobi are not very long lasting – it starts all of a sudden, and it ends all of sudden as well; and within a couple of kilometers the weather differs a lot. We started off in full rain trusting his aplomb.

The driver, Nickson, soon became a friend of us. He was the same person who took us from the airport. He was from a village almost 200 kms from Nairobi, and after listening to my interests, he quickly agreed to take us to his native village for a day or two. Unfortunately I couldn’t manage to go there this time.

There is a brief formality you have to follow while entering the national park – you need to purchase the Safari card from the main office. Foreign nationals need to carry their passports, nothing for locals though. The entry fee is 50USD per head for foreign nationals. For local people it is 500 shillings. If you want to take our car inside the park then it is another 300 shillings.

But of course you will have to take your vehicle inside. Because the place is huge and as you can very well imagine cycling or biking inside is not possible. The lions might get some easy breakfast if you do so. And, again, do negotiate about the taxi fare for this trip. You would need a full day if you want to cover the entire park, and you will always be in your car and moving. You don’t need an advanced 4X4 drive for this park (contrary to Masai mara, where you must have a 4X4); but a SUV is probably advisable than a sedan. Ours was not an SUV, thus faced some difficulties in certain areas.

It was still raining when we reached there, but thankfully, by the time the formalities are over the weather God smiled at us. The park is not a place of very dense jungle. Long vast of open grass fields with infrequent clusters of bushes encapsulate the whole vicinity. It was around 11AM we entered the place.

Welcome to the Park

There is a brief animal orphanage centre nearby the main entrance of the park. We didn’t enter there at that time with a plan of visiting there at the time of return. Unfortunately during return we couldn’t managed to go there, so advice travellers to keep that in mind, I believe the orphanage is also a corner worth to visit there.

We strolled a lot by the roads and lanes planted between the trees and bushes. The park is quite large in size, and you need to remember the path you came from, or at least the junction numbers. It is not that you will be lost in the wild; they have marked each junction very carefully and with loads of information.

Our inexperience about the place soon was evident when even after roaming for almost an hour we could not find even a single animal. Soon we reached at the place where the forest ranger lives. He is Philip, he enlightened us “lions and leopards are most visible during early morning, some others are noticeable during afternoon time also”. So we realized we have just missed the morning show. 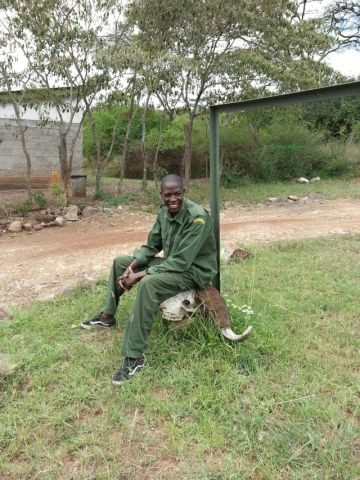 Philip – the forest ranger there

As per him, the lions are almost like pet there for him – they come just about every morning near by his humble quarters, and leave. Probably they realized Philip is one of the inhabitants of the wilderness itself, and the ranger is not complaining. 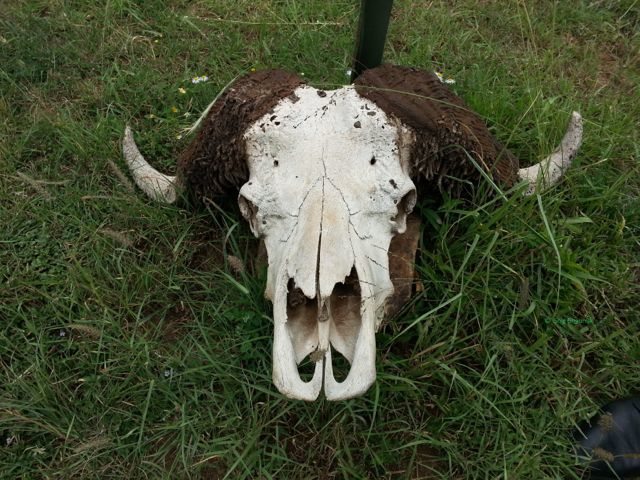 Decoration with bison skull in front of his quarters

The park has several gates to enter and exit – one of them is of course the main gate, others are Cheetah Gate, Langata Gate, Maasai Gate. You can exit from either of these, but have to get entered from the main gate only – since the Safari card is available only at the main gate. The orphanage is also besides the main gate. 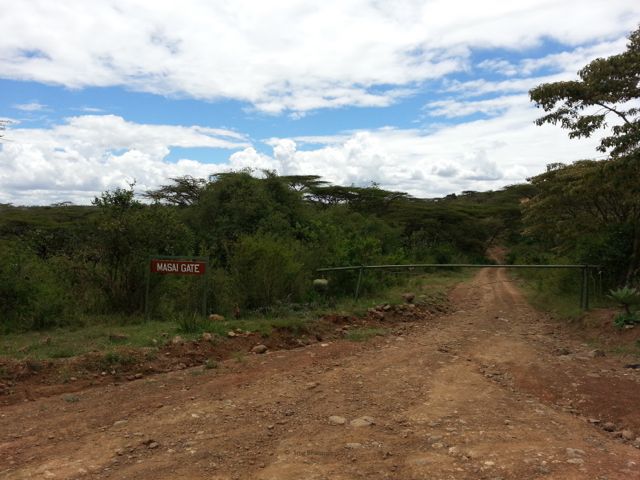 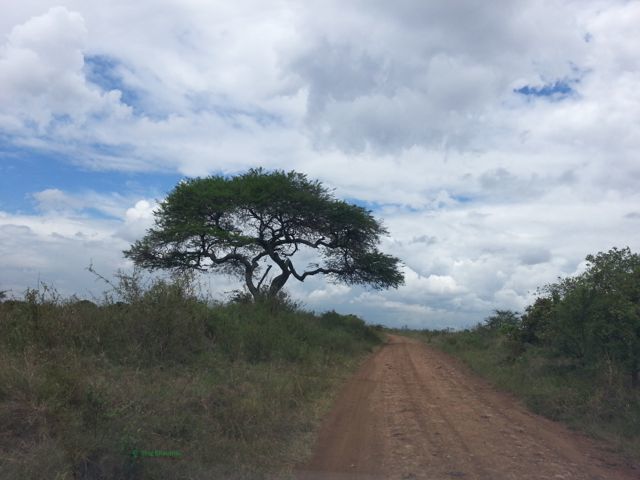 It was almost 2PM by then, we were feeling hungry. We didn’t brought any food from outside(and I suggest you shouldn’t do so, bring only water); there is a restaurant very near to main gate and inside the park only. So we headed back to that place. On the way back we visited the Ivory Burning Site. It is an important landmark there. The site is built for burning ivories to support International Elephant Ivory Trade Ban. This is the place made news world over where an accumulation of 12 tonnes of ivory worth over 1 million USD was burnt on July 1989. 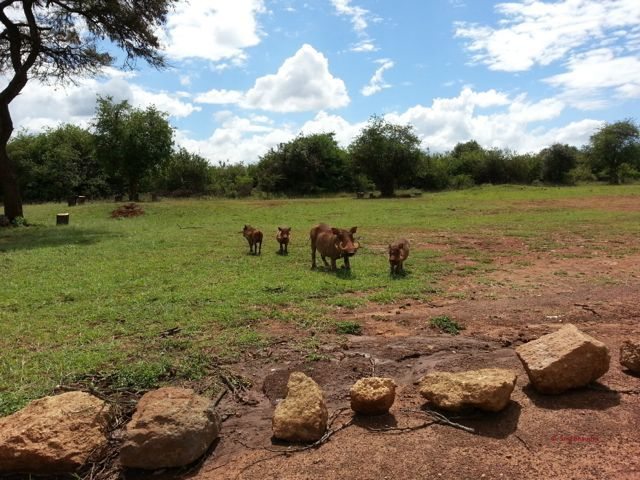 We reached to the restaurant, the ambience and surroundings will definitely lift your spirit. The food is served on the tables scattered under big trees, you’ll be sitting under open blue skies, on lush green grasses, not inside some closed door space.

Entrance to the restaurant

Food under the nature

By the time, our lunch was over, it was almost 3. We decided to quickly get back to the park again – determined not miss the afternoon show. Luckily for us, as soon as we entered deep into the park we were greeted by a huge flock of zebras, bisons and giraffes. I was badly missing my binoculars by then since the whole field was repleted with them, but it was quite a distance from the car. 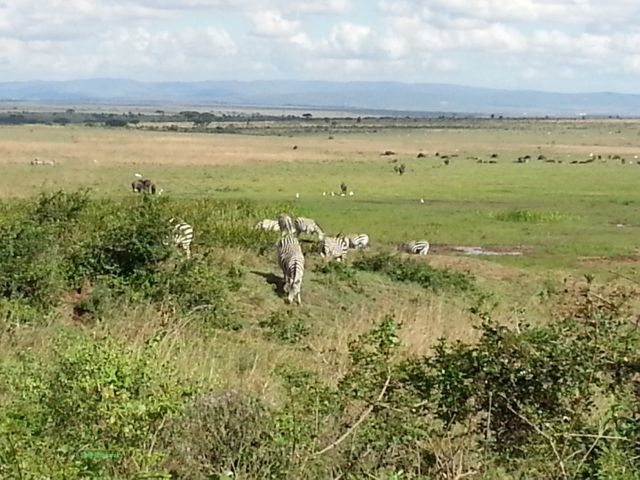 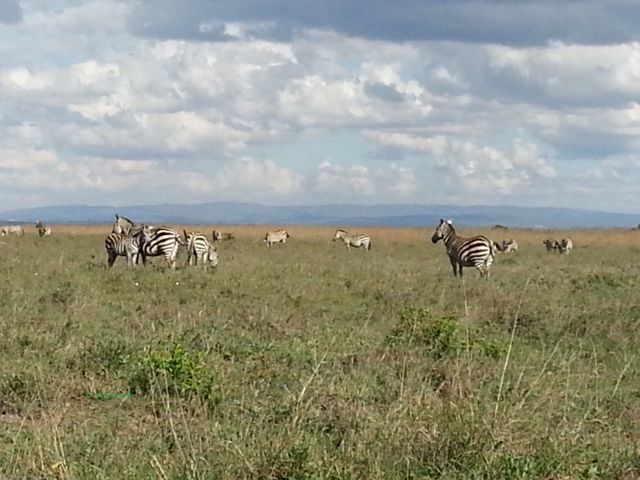 As we proceeded, more closer looks of them were available. All of a sudden the whole park became so alive with all of sorts of wilds. We realized one thing there, that don’t get disappointed if you don’t see any animals. Because you never know what awaits you after every turn you take. And the abundance of animals the park has, we will most definitely get a load of sights full of wilds. But do take your binoculars there, and a camera with big long lens. This is not a place for point-and-shoot. 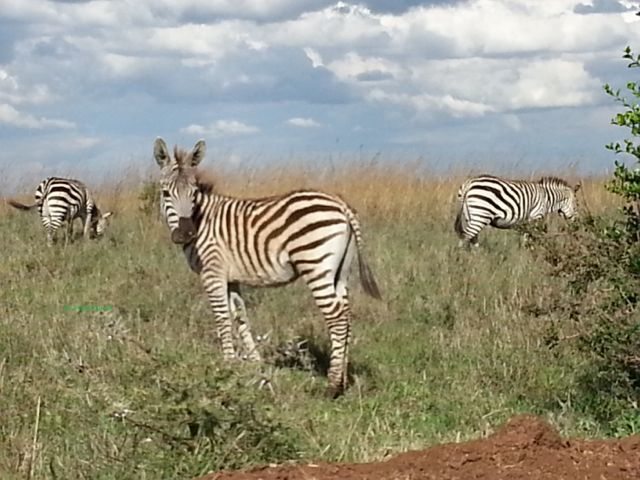 They probably got disturbed by us

A pair of giraffe was busy for their late lunch, they didn’t notice us. 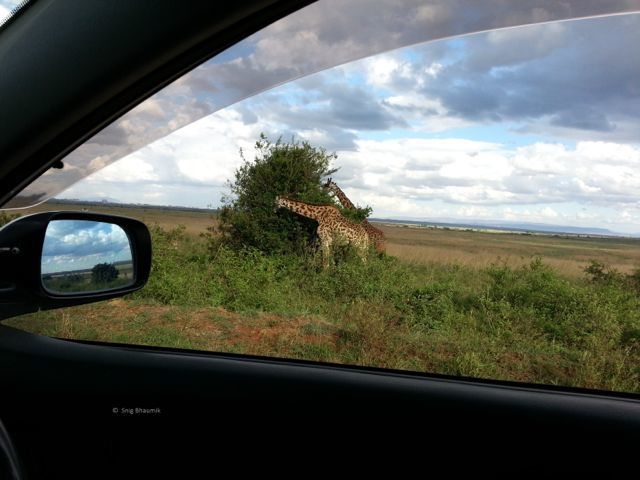 Not bothered by our presence 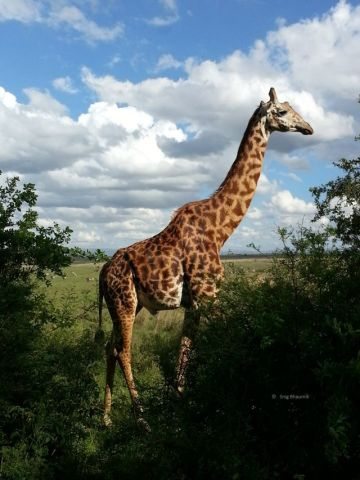 By that time it was almost 5.30; the park gets closed by 6. So we started returning to the main gate. On the way, got blocked by this guy. 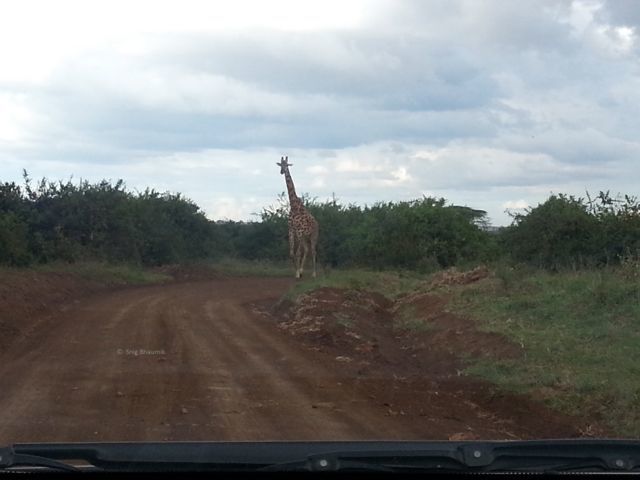 Coming along the road, straight towards us 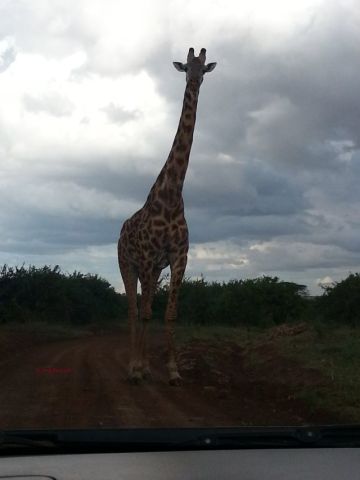 He took almost 15 mins to cross us

He performed quite an investigation on us, and took almost 15 minutes to cross our car, continuously watching us suspiciously.

In the end, we reached to the main gate; absolutely not wanting to get back. Don’t forget to stamp your exit on your safari card at the main gate. It took the whole day to cover the park, but was totally satisfying experience. If you are not able to go to Masai Mara, you must visit there; but for the people who went to Masai Mara or going to go there, may exclude this from your itinerary if you are shortage of time.