When I was in Ludhiana, one day I received a call from my friend Gunjan to plan a single day trip to any nearby place. Choosing a single day trip is really difficult, if you are not in mountainous region or not so close to any historical place. Luckily, being in Delhi we have some options like Agra, Mussoorrie or Amritsar out of Delhi. So, this time we decided a single day trip to Amritsar and Wagah Border. She left from Delhi by Chhattisgarh Express and I boarded the train in Ludhiana. Around 5.30 AM, we were in Amritsar. There are some buses available at Amritsar junction. You can board them and take the trip to The Golden Temple free of cost, but we didn’t have any idea of the timings. So we left to the temple by a rickshaw and within 20 minutes we are at the Golden Temple, also known as Harmandir Sahib. 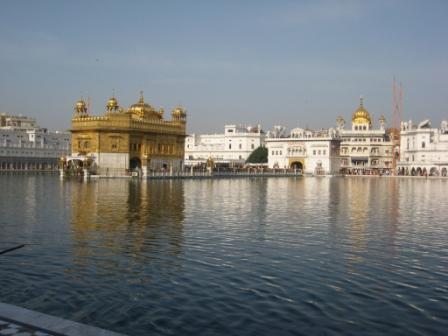 Golden Temple or Harmandir Sahib, informally referred to as The Golden Temple or Temple of God, is culturally the most significant place of worship of the Sikhs and one of the oldest Sikh gurdwaras. It is located in the city of Amritsar, which was established by Guru Ram Das Ji, the fourth guru of the Sikhs, and is, also due to the shrine, known as Guru Di Nagri . Guru Arjan Sahib, the Fifth Nanak, conceived the idea of creating a central place of worship for the Sikhs and he himself designed the architecture of Sri Harmandir Sahib.
Even early in the morning there were lot of people, who came to witness the glimpses of the temple. The temple administration arranged excellent facilities for the convenience of pilgrimages. You can put your belongings in the lockers free of cost, you can be fresh outside the temple, and you can also take bath there.
After taking bath we removed our shoes to one of the counter offering free services and went inside the temple. At the entrance of the temple warm water was floating in that chilled winter, you can put your leg inside that to get them clean and then walk away further. The temple is surrounded by a large Sarovar (manmade lake), known as the AmritSar (Lake of Holy Water or Immortal Nectar). There are entrances to the temple on all four sides, signifying the importance of acceptance and openness. 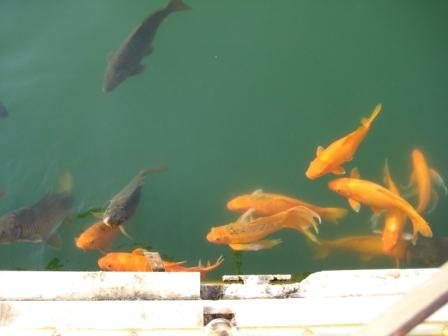 People were taking bath inside the sarovar also. Anyone who wants to enter the Harmandir Sahib may do so, irrespective of religion, colour, creed or sex. The only restrictions are that the person must not drink alcohol, eat meat or smoke cigarettes or use other non prescription drugs while in the shrine.
There are three holy trees (Bers) inside the temple complex, each associated with a historical event or saint.
After walking all around the complex we went to the main temple. Before entering to the temple, you should must cover your head with a piece of clothes. If you don’t have that piece, you can take that at the temple gate free of cost. These clothes are remain lying in a basket at the gate. 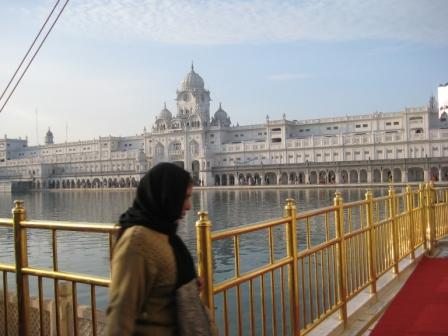 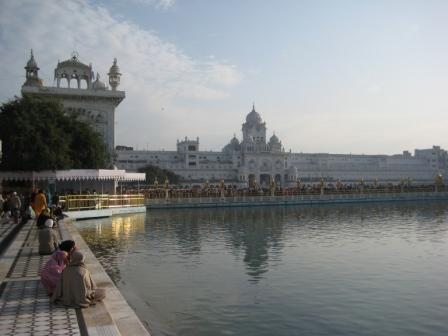 There was a long queue before entering to the main temple. We were the part of this queue for at least an hour and finally got the entry to the holy temple. 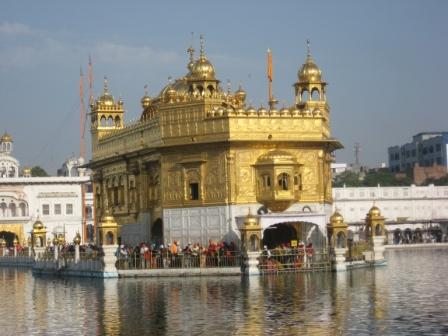 Sri Harmandir Sahib, is built on a 67ft. square platform in the centre of the Sarovar(tank). The temple itself is 40.5ft. square. It has a door each on the East, West, North and South. The Darshani Deori (an arch) stands at the shore end of the causeway. The door frame of the arch is about 10ft in height and 8ft 6inches in breath. The door panes are decorated with artistic style. It opens on to the causeway or bridge that leads to the main building of Sri Harmandir Sahib. It is 202 feet in length and 21 feet in width. 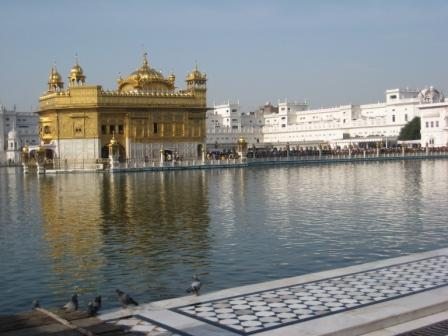 After visiting the temple we came back to the main complex outside the lake. At the exit of the gate we got Prasad (Halwa), a very tasty Prasad.

Then we went to Jallianwala Bagh, which is just 400 meters north of the golden temple. Jallianwala Bagh is a public garden and houses a memorial of national importance, established in 1951 to commemorate the murder of peaceful celebrators on the occasion of the Punjabi New Year on April 13, 1919 in the Jallianwala Bagh Massacre. 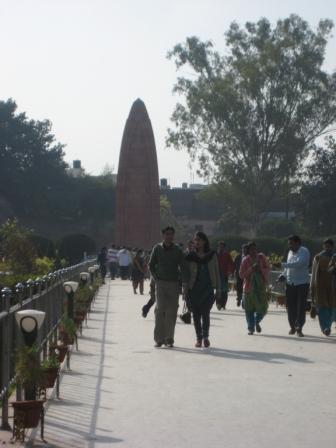 Official British Raj sources placed the fatalities at 379, and with 1100 wounded. The true figures of fatalities are unknown, but are likely to be higher than the official figure of 379. 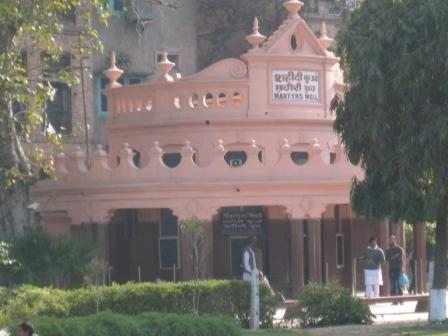 Inside the garden there is a well surrounded by grills. It is believed that people jumped inside the well to save their lives from bullets. So the well became a graveyard for hundreds of people. 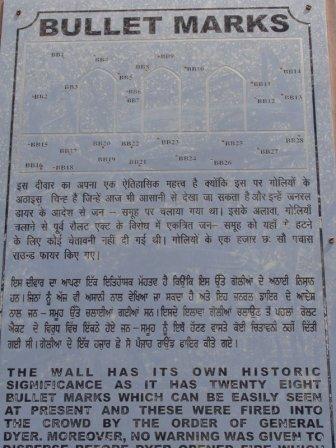 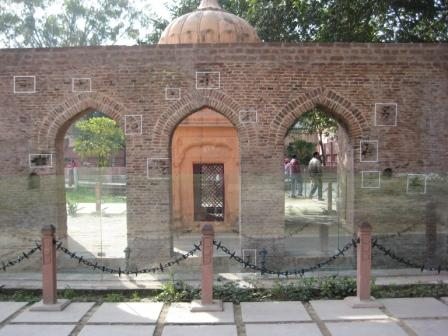 After paying our tributes to those innocent martyrs we decided to move towards Wagha Border.

We took a shared TATA ACE for Wagha Border. These are specially run vehicles, which do this trip routinely. You pay fair for both the sides (around Rs. 60 per person and the auto will wait until your return after the Ceremony. We passed across some of the most fertile land in our around 30 kms journey. The Border is not like we have seen in Border movie. It is an elaborate complex of buildings, roads and barriesr on both sides. We crossed the short stretch of paved no-man’s land, dividing 140 million Pakistanis from one billion Indians, who, until partition more than 50 years ago, shared centuries of history. 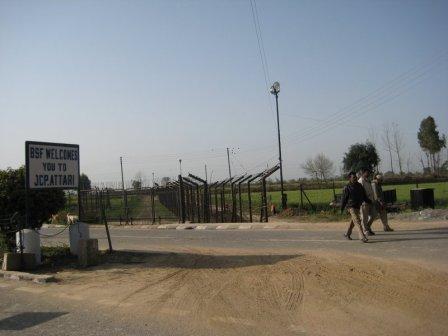 The daily highlight is the evening “Beating the Retreat” ceremony. There are stares where you can sit to watch the ceremony. This ceremony is performed by Indian Border Security Force (BSF) and Pakistan Rangers. 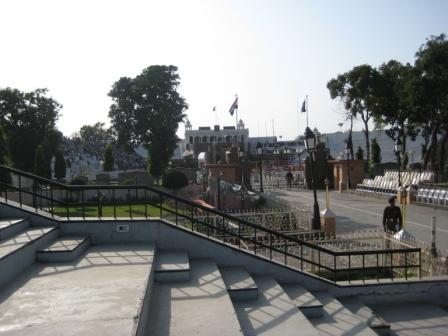 As we waited for the ceremony to begin, quite a crowd gathered on both sides. There was an air of excitement. Both the sides, people are loudly speaking slogans in favor of their own country. As the guards muster on each side and the crowds on both sides wave their respective flags, the air resonates with nationalistic slogans, including “Ji Le-Ji Le Pakistan (“Long Live Pakistan”) and “Hindustan Jindabad (“Long Live India”). 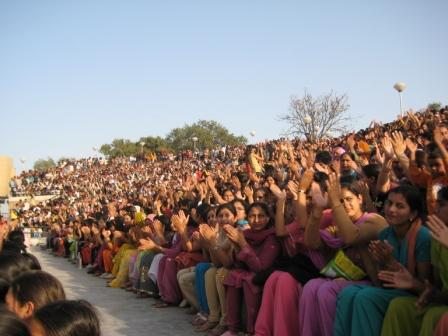 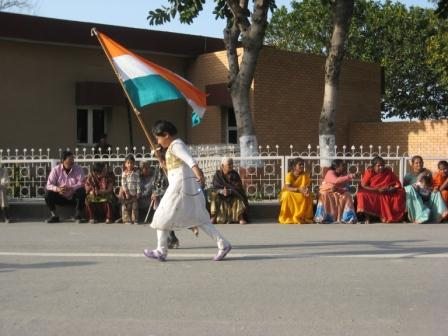 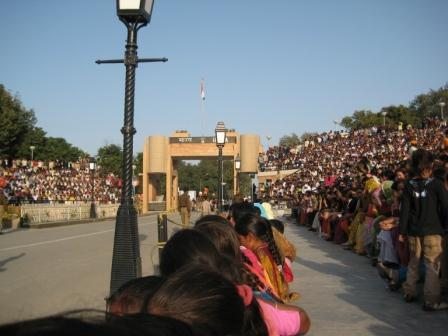 Then the show began. Soldiers from both countries marching in perfect drill, going through the steps of bringing down their respective national flags. But what was amazing at the border to see the aggression of the soldiers in their marching drill. 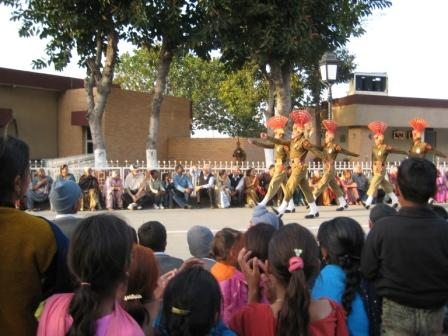 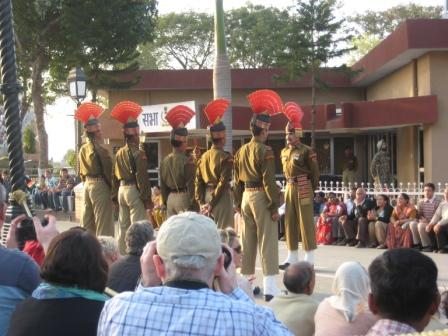 They were aggressive in their moves and tried to supersede another sides. Public was becoming mad in this rare kind of patriotism darshan. After one hour this show ended. The crowd felt silent and started moving to their destinations. But what left in my mind is the need of this show? Cant this patriotic show can be friendlier in nature? The soldiers from both sides may remain friendly, but the general public who gathered there for this ceremony, always comes back with hate, anger and a negative type of patriotism for another side. You never feel at wagha that other side is so near to you. In other scenario, it always fill you with joy having people across border so closely, but at Wagha, after this ceremony you only come back with a soured heart.

Witnessing a pilgrimage and patriotism at Amritsar and a Madness at Wagha Border was last modified: December 22nd, 2019 by Avanish Maurya