What do you get when you combine Sin City with the glitz and glamour of Hollywood? Well, you get a chance to embark on a wild ride through time and space, into the recesses of your personal fantasy world! It’s a world where fabulous fakes, dancing waters, blazing infernos and world-class entertainers combine with magical theme parks, mind-blowing animatronics and celluloid dreams. You got it, baby! Welcome to viva Las Vegas and star-struck Los Angeles!

Travel the globe while staying in Vegas

Vegas brings you some of the world’s most famous monuments, carefully reproduced with a stubborn core of commercialism. In fact, you can travel the globe and through the ages – all while staying in the same city! Where else can you visit Paris, New York, the villages of the Mediterranean, Venice and the ancient Greek gods all in one evening?

Never mind how a neon sea ended up in the Mojave Desert, or why the Statue of Liberty is immersed in a sea of traffic! When you’re in Vegas, it’s best to leave all logic behind and just celebrate the city’s over-the-top, cheery garishness. And that’s precisely what me and my husband did while visiting Sin City.

The first thing we noticed when we touched down were the lights. For as long and as far as we could see, there were thousands of glittering lights.

Glittering lights on the Vegas Strip

The sapphire green façade of MGM Grand and a bright purple structure beside it were also distinctly visible from the flight. As we reached closer and closer, the lights got brighter and everything got bigger. Big and bright – that just about sums up Vegas. Whether it’s the giant hotels and casinos, outrageous special effects, or elaborate costumes, everything is larger than life!

Not wanting to miss any of the action, we decided to stay at Planet Hollywood (earlier Aladdin), bang in the centre of the Strip and walking distance from most other hotels. 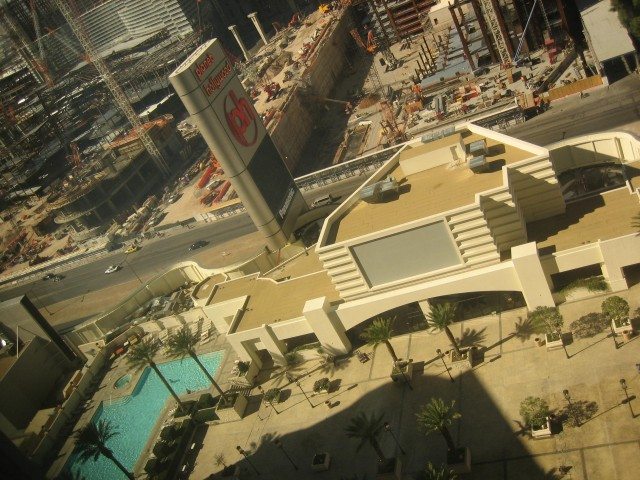 On one side were MGM Grand, New York New York, Excalibur, Mandalay Bay and Luxor, while the other side boasted of the Bellagio, Paris LV, Venetian, Caesar’s Palace and Sahara. Each hotel had a unique theme and was an engineering marvel in itself, artistically designed to perfection.

One of my favourite hotels in terms of décor was Paris Las Vegas. Opulent style and fine craftsmanship impart an European sophistication to this hotel.

Authentically replicated Parisian landmarks include the Arc de Triomphe, the Louvre façade, the Paris Opera House and a cobble-stoned French street at the base of the Eiffel Tower, which was home to the casino. The quaint bylanes offered myriad French dining options from cafes to creperies and boulangeries. The ceiling, which resembled the blue sky with floating specks of clouds, looked enchanting!

Another hotel which appealed to my die-hard romantic sensibilities was the Venetian, inspired by the architecture and grandeur of Venice, Italy.

The highlight of this hotel were the indoor and outdoor gondola rides, complete with serenading gondoliers.

Gondola rides at the Venetian

But what fascinated me most was the ‘Living Statue’ – a lady dressed and painted fully in white, resembling a statue, stands for eight hours non-stop at the centre of the hotel’s courtyard daily. When I first saw her, I mistook her for an actual statue.

Then I noticed a crowd of people staring at her, some cracking jokes, others passing comments to make her laugh. But she didn’t even tweak a muscle, leave alone budge an inch. The only time the ‘Living Statue’ reacted was when a tourist placed a dollar in front of her – then she smiled slightly and gave him a thumbs-up!

And of course, how can we forget the MGM Grand, which gave us a royal feeling from the minute we saw it. The massive lion statue outside the hotel’s entrance, the huge casino and spacious interiors gave it a truly ‘grand’ look.

We also visited the ‘Lion Habitat’, a popular tourist attraction. Strolling through a glass tunnel with these majestic creatures prowling above and below us was a surreal experience. But the antics of the trainer were even more unbelievable. He fearlessly strode up to a sleeping lioness, lay down beside her and put his head on her back. The crowd gasped, fearing the worst. But the lioness merely grunted and playfully pushed him away with her paw. Aww… Cho chweet!

Another not-to-be-missed attraction in Vegas is the Fountain of Bellagio. It packs all the punch of Fourth of July fireworks and Disneyland Parade into one! Outside the stunning Bellagio hotel, thousands of fountains perform a magnificent aquatic ballet choreographed to music and lights.

The show is set in rhythm to one of 30 classic Vegas songs. As the music plays, the jets spray water up to 200 feet in the air, making it wave and dance exactly on beat to the music.

By now, it’s obvious that in Vegas, there’s no dearth of fake famous monuments, or to put it better – precisely-moulded models of the world’s wonders.

While Luxor immerses you into exotic Egypt, Caesar’s Palace transports you to ancient Rome. Excalibur resembles a medieval castle, while Mirage has its personal volcano that erupts every 15 minutes. As for New York New York, it gives you a tour of the Statue of Liberty, Times Square, Brooklyn Bridge and Empire State Building all in a matter of minutes!

And if you get bored of history, you can always drop by at the Coca Cola or M&M’s store located in Showcase Mall. The World of Coca Cola Museum is the largest bottle-shaped building in the world, which sells all coca cola merchandise / memorabilia and is a collector’s dream. As for M&M’s World, well, it uses ingenuity and a whole lot of sugar to make an impression on visitors, young and old alike.

Chilling out at M&M’s World

The mouth-watering exhibit features M&M’s colourful characters on everything from T-shirts and golf-club covers to calculators and martini glasses. Four floors of retail space devoted to your favourite chocolate-covered candies? Yummy… things can’t get better than this!

But what about those who dream of making a fortune in Vegas? Well, there are options galore… From huge casinos at all the hotels, pubs and restaurants, to hundreds of slot machines at the airport itself, you can try your luck anywhere and everywhere. In fact, when we landed at Vegas airport, we saw many people rushing to the slot machines even before claiming their baggage! Money can sure make people do strange things. I, on the other hand, couldn’t be bothered with learning the tricks of the ‘trade’ – after losing $2 on a slot machine with complicated rules, I swore never to gamble again. As for my husband, he kept trying his luck at various games, before calling it quits at $1,000 down (after initially striking it big)!

Nevertheless, visiting the casinos is an experience in itself. They seem never-ending, with rows after rows of slot machines, a variety of roulette and blackjack tables, huge poker rooms and scintillating pleasure pits, with beautiful women clad in sensual lingerie dealing cards, serving drinks or dancing on tables. The sounds of chips clanging together, the constant ringing of slot machines, people grooving to hip-hop music, whoops of delight followed by cries of despair – all combine to create an adrenaline-pumping atmosphere at all times of the day and night.

Talking of a charged-up environment, there’s no point going to Vegas if you’re not planning to see at least one ‘show’ – be it magic, acrobats or showgirls. We zeroed in on ‘V – The Ultimate Variety Show’, which was a mix of comedians, jugglers, acrobats, death-defying stunts and magicians. The one-hour show was a non-stop riot and entertaining to the core. The juggling act took the cake, with the performer juggling ping-pong balls – not with his hands, but with his mouth, and making them fall on a synthesiser in rapid succession to play music. The acrobats were amazing too, with one of them balancing himself on top of his partner, using only the back of his neck! So now you know why Vegas is called the Entertainment Capital of the World.

But don’t worry. If you happen to splurge all your money on various forms of entertainment, you can walk into any of those buildings sporting sign-boards that read: ‘Bankruptcy – Free Consultation. Walk-Ins Welcome’. Didn’t I tell you – there’s something for everyone in Vegas!

Amidst all this modern, outrageous and dramatic existence, there’s a distinct air of casual hedonism and neon-bright frivolity that you’ll either love or hate with a passion. For our part, we loved it. So much so, that after celebrating life at Las Vegas, we proceeded to the city that celebrates celebrities – Los Angeles! Read all about it in ‘Part 2: Los Angeles’.

(Note: A modified and shortened version of the above article was published in the ET Travel section of The Economic Times on April 10, 2008. I have reproduced the original version here for the reading pleasure of fellow Ghumakkars.)

This post is in continuation with my last post Delhi-Vadodara-Delhi Road Trip (Part -1). Starting from Delhi, with a stop-over at Udaipur, we arrived…