Hello Friends, my name is Animesh Das and after my tour to Ujjain and penning upon the same in Ghumakkar, alongside receiving an array of good feedback, I am writing down the experience incurred during the month of Kartika Amavasya i.e. Deepawali.

Born and raised up entirely in North India, Capital of India Delhi NCR, I am used to the celebrations of our Diwali culture of North since childhood, however as a prejudiced Bengali on the day of Diwali we always celebrate Kaali Puja in form of Matri bandana which occurs typically from midnight to early dawn.

But this time I had a rare opportunity to visit the Banga Desha (which is the heart of Shakti sadhana, generally in the land of Shaktism), I had an approved leave for 10 days and knowing Diwali would be a part of my holiday, I decided to do a Kaali Puja Parikrama during the night of Diwali.

We reached home and after a day’s rest I was ready for my parikrama on the day of Diwali. Alongside me was my brother in law Krishnendu who generally go every year and undertake this parikrama.

Kalighat is one of the major satipitha among 51 shaktipitha of Indian mythology and it is believed that the Kalighat represents the site where the toes of the right foot of Dakshayani or Sati fell during the rudra tandava of shiva and henceforth it is the first shaktipith of the Eastern India.

Its located near hazra area and very easily accessible. Main Puja is offered throught the day starting 4 am in the morning continuing 11 PM in the night, with major footfall during Tuesdays/Saturdays alongside amabasya.

When you enter the shrine a very common suggestion to every devotee or fellow traveler is that please beware of the pandas or rajpurohits who will ask you to perform puja and ask for exorbitant price.

What I will advise is that when you go to the shrine area just entering the temple, leave your shoes to Prasad sellers and it is solely your wish to take the Prasad the amount is INR 21/- 51/- 101/ 151/201/251/501/1001 to anything upto your choice and mannat. Just take a purohit don’t ask any thing or bargain simply take him along with you.

However I am still saying if you have mannat and want to donate as per your wish you are free to do so, just don’t fall prey to demands. 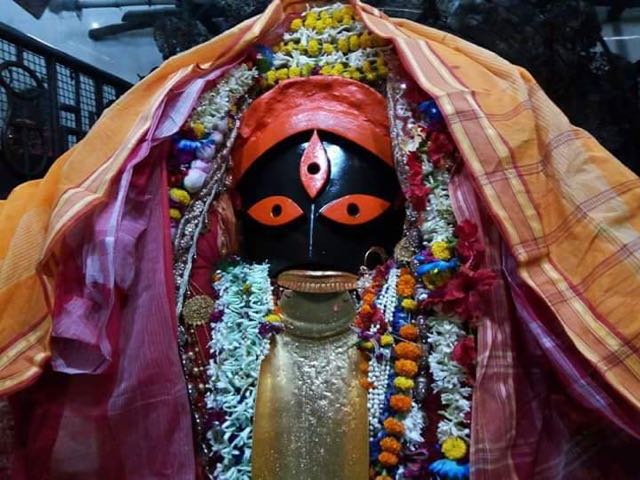 After the darshan and payment to panda, we moved out to the Darshana of different Kali roopas , we moved first to the burning ghat(Shamsan) of Keora Tola Shamsan which is just a 0.1 Km from temple or 10 mins walk by foot Here the Puja of Kali or the Soshan kalika( The Guardian of Burning Ghats) is done.

This Kalika Roop is worshipped only in Samshan Bhoomi as prescriped in Tantra Mal here the Kali Maa is worshipped as per Tantric rituals at midnight. 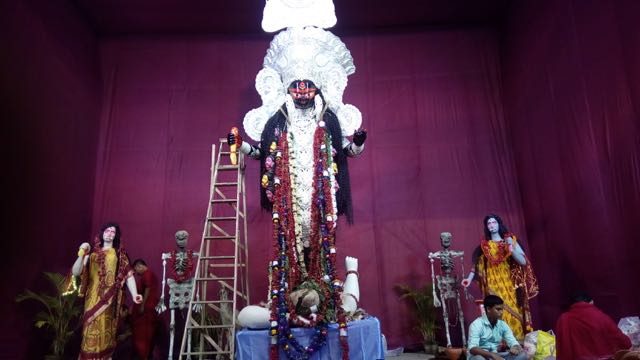 The next destination for parikrama was the worship of Shri Krishna Kaali where the Maa is depicted as Lord Krishna.

According to legends in Vrindavana, when Radha rani came to worship Lord Krishna, radharani’s mother in law Kutilaa compained to Radha’s husband Ayan that she is worshipping Krishna. When Ayan himself went to verify the same , Lord Krishna took the form of Kali in Krishna Kaali roopa and henceforth this sweet incarnation came to be known as Krishna Kali. 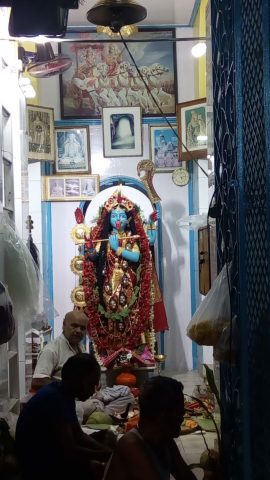 After having the divine darshan of Krishna kali roop we moved to Harish Chaterjee street where the worship of major matri roopas were there. Our first stop was at Singhavahini Kaali where the mother goddess is seated upon the Lion with grand mudra and it was observed and worshipped in Royal manner. The radiance of this roop is just beautiful in words to describe, when you move to Harish Chaterjee street do try to catch this version of Matri-Rupa 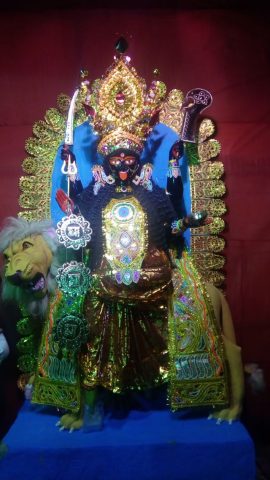 After moving few metres ahead alongside the street we went to Chetla Agrani Club this is very famous club and get award from Statewise competitions, we saw the beautiful image of Elokeshi Shiva Kaali Elokeshi means weird hair style where as per Markendya Puraan Maa Chamunda and Maa Ugra kalika were in this form devouring the Asura sena and massacring every single Daityas during the Chanda munda War.

Her hairstyle is elaborate weird hence earning the name of Elokeshi.

Next we moved towards our destination where we would see two beautiful Roopa of Mahakali. One is the Padmasana Kali and other one is Sahsatra Bhuja Kaali. The Padmasana Kali is worshipped according to Meditation Brahman Paddati and is considered to be Yogamaya arising from the Lotus of wisdom. The idol is based on chamunda roop and is considered to be the Goddess of Wisdom.

The sahasra bhuja Kaali (The Goddess with 1000 hands)is worshipped based on the Adbhut Ramayana story where Lord Rama has to kill Sahasrabhuj Ravana, Lord Rama got wounded in battle and Sita Maharani got enraged and took the form of Mahakali with thousand hands and slayed thousand headed Ravana with a single blow.

The Form of Sahasra bhuja kaali is very unique with lord shiva as his husband on left and she is been adorned with snake necklace and beautiful Red Sari with Abhay Mudra. 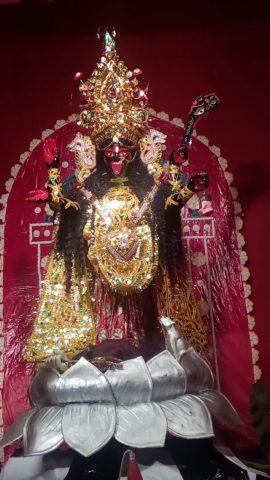 As we got delighted to see the pictures of Kali idols near Chetla we moved towards the most famous and iconic Kaali Puja of Kolkata i.e. the one and only Chamunda Kaali, one of the fearsome idols of Kalipuja depicting Ma Kaali in full enraged and angry form.

This Kali Puja has reached its 65th Year and is so famous that if you ask for Chamunda Kali Puja everyone will guide you to the puja pandal. For convenience its just beside the Durgapur-Chetla Flyover entrance.

The idol is been depicted in Night fight time when Ma Chamunda took the ferocious form of Ugrachandika and was creating panic and havoc among the asura army with its hordes. This idol is 30 Ft high and is in supreme character.

The Shav shivam Kali- Who resides upon the corpses 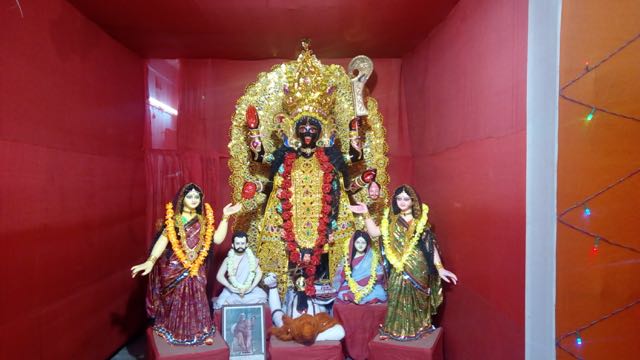 The Adi Kali – The Kali Maa residing as guardian of ancestors 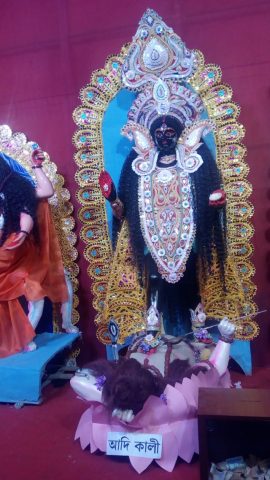 The Chinnamasta Mata- One of 10 Mahavidyas

Ma Tara : One of 51 satipeethas and major Tantric pith. Ma Tara is beautiful and one of the Dasha Mahavidya

Our Final destination came to halt at Sangathani Club which is doing the 100 yrs+ puja depicting three Tri-Shakti Kaali resembling Kalighat, Dakshineswar & Tarapith. Jai Ma Jai Ma Jai Maa that’s the only sound we can experience in this 5.5 kms Parikrama and the bliss one cannot suffice in written words. 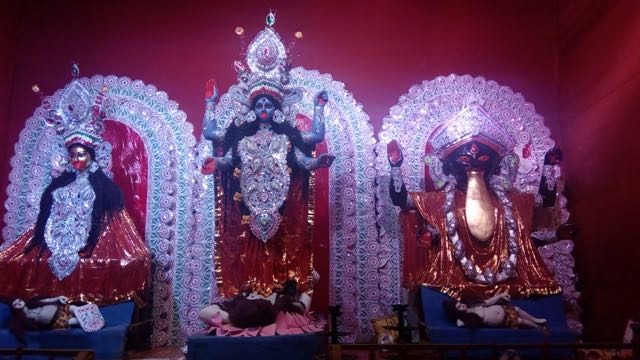 Its really true what is said in Markendya Devi Bhagwat Puraana, that devi in form of Mahakali is only one and is the source of full feminine power as mother, wife and sister and overall the Maa of Universe and to appease her we have to bow to her eternally

1.1: Salutations to the Devi, to the Mahadevi; Salutations Always to Her Who is One with Shiva (the Auspicious One).

1.2: Salutations to Her Who is the Auspicious (being One with Shiva) Primordial Source of Creation and Controller of Everything; We Bow Always to Her.

So here is the first leg of my travel and I believe that one should personally visit and try to do this parikrama for self enlightenment. My next writing will be on Visit to Jayrambati and Kamarpukur which is eternal tirtha to Bengali people and lesser known places for bliss.

Kindly accept my apologies if any corner I have incurred issues, Awaiting your feedback

A Tour to Kolkata’s Top Kali Puja Pandals was last modified: May 29th, 2022 by Ani D

There are several sight seeing places in and around Niagara Falls, especially if you are on the Canadian side. There is a large IMAX theater that shows a film on Niagara Falls and some adventurous souls who attempted to perform daredevil acts there. There is also a wax museum here and a delightful flower garden.