Almost every tourist attractions in Fort Kochi have a history of their own so is the Chinese fishing net.

Kochi, the ‘Queen of Arabian Sea’, was once a major centre of trade with the Arabs, Chinese, Portuguese, Dutch and the British where everyone had left their marks. While some claim that the Chinese traders from the court of Kublai Khan set up Chinese fishing nets to shores of Kochi that dates back to 14th century; some others say Chinese explorer Zhang He introduced the Chinese fishing nets here in early 15th century. Whatever may be the correct claim, the fact is that this system is in use for more than last 500 years.

Once a fishing accessory, the Chinese fishing nets, now have become a major tourist attraction in Fort Kochi. 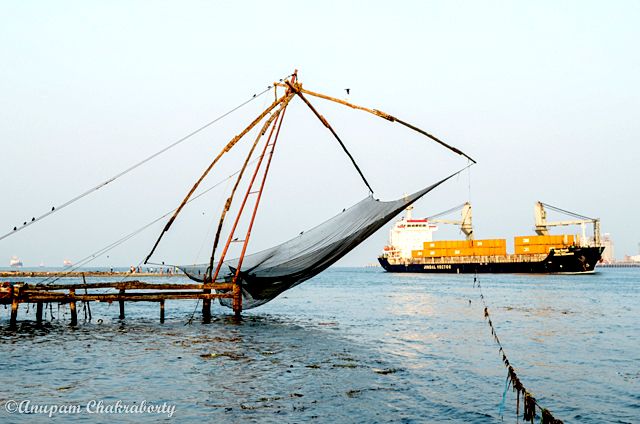 Lined in rows on the shores of Arabian Sea at Fort Kochi, the Chinese fishing nets allure the visitors with their operation in the morning and evening. Evening is very special because sun sets on Arabian Sea with warm glow and creates a spectacular sight over the fishing nets.

While walking on the shores near these fishing nets, especially in the morning and evening, you will see the fresh catches and many small shops around with a signboard “You buy we cook”. If you are a fishetarian, you may like to experiment here. Buy from the fresh catches and then choose one of many people to cook for you.

Chinese fishing nets or “Cheena Vala” in local parlance are operated from the shore. The nests are set with bamboo poles and the systems are worked with wood beam that are held horizontally and ropes weighted by rocks. To descend into the sea water, a fisherman walks on the beam. It is then left in the water for few minutes and lifted up by pulling the ropes with rock weights by at least 5-6 men. Visitors look at them with much curiosity and awe as they are a fiesta to the eyes of any tourist.

Some Pictures of Chinese Fishing Net and Fort Kochi Beach 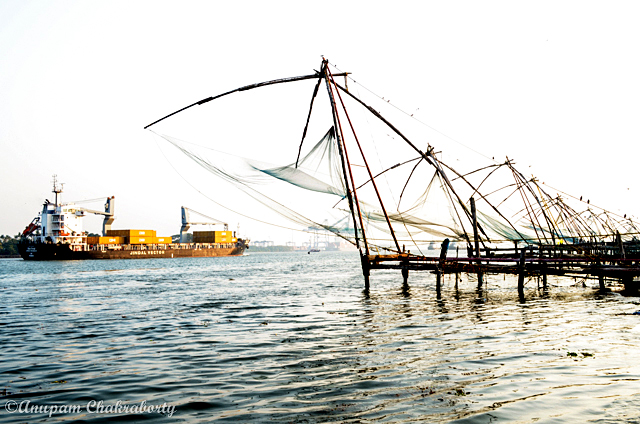 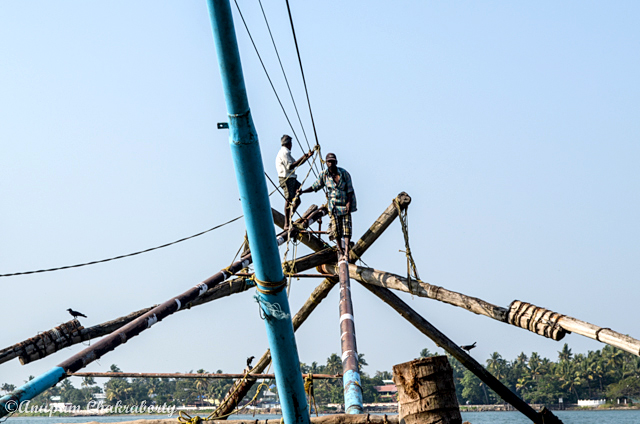 Where to see the Chinese Fishing Net in Fort Kochi?

Located near Fort Kochi beach, the place is named after the great Vasco da Gama and is called Vasco da Gama Square. A narrow path from this square goes along the beach and it will take you close to the fishing net set ups. While walking on this path, a Bengali song of Yesudas that was playing in a Malayali shop surprised me a lot! I could not help but enquired the shopkeeper instantly. He replied that the song was recorded from a live program on the previous evening. Being a Bengali, it was a pleasant surprise at Fort Kochi Beach. 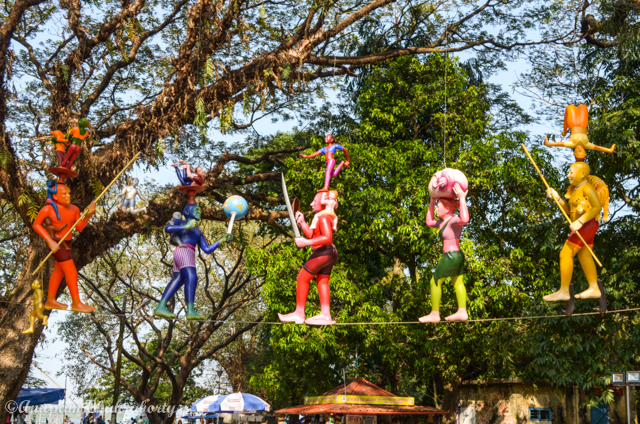 Located at INS Dronachrya in Fort Kochi, the Southern Naval Command’s Maritime Musem, displays a variety of both indoor and outdoor exhibits relating to Indian Navy and marine history. This museum was established in 2001. 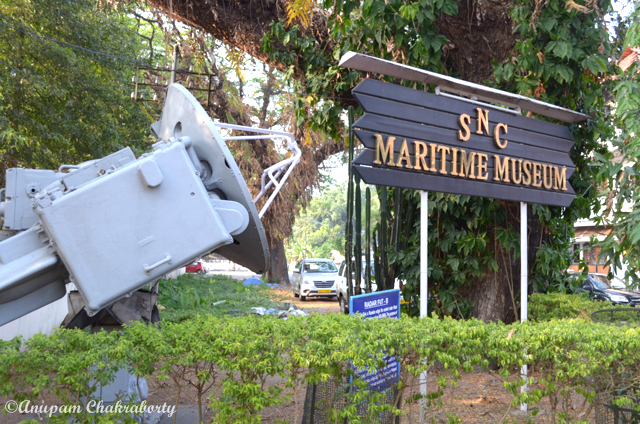 As we entered into the museum, we saw variety of exhibits in its wide lawn. There are surface to surface missiles, anti aircraft guns, radars, model of warships and an old  Helicopter.

There are two exhibition halls; both are made in the model of a bunker. The exhibition halls portray the maritime history of Kochi and the history and evolution of Indian Navy. The models, pictures and paintings made the exhibits more comprehensive and informative.

Some Pictures from SNC Maritime Museum 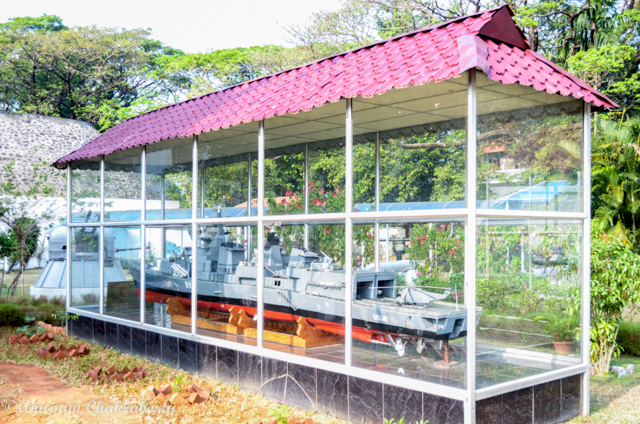 A model of warship

Corridors of the museum are beautifully decorated with paintings 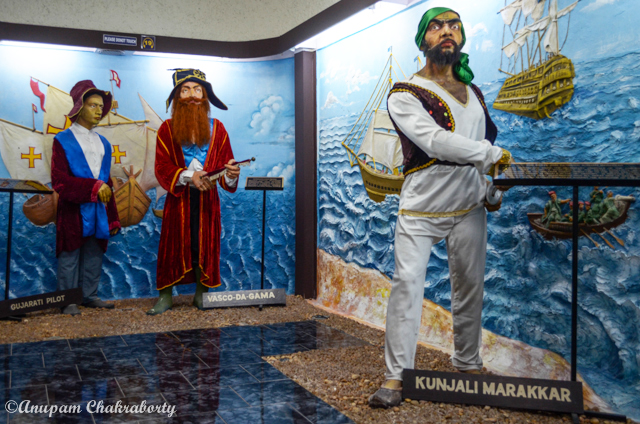 A Model , Vasco da Gama on the middle 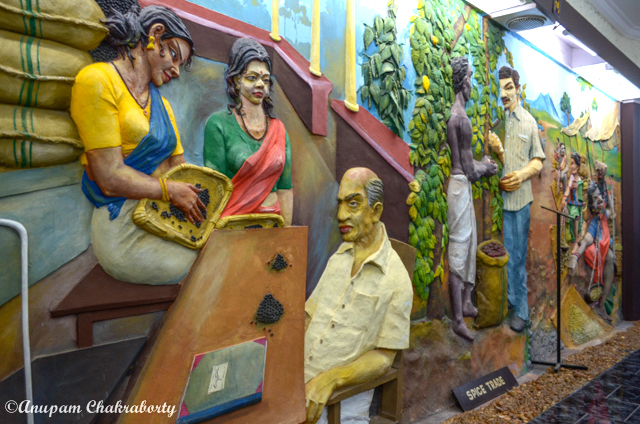 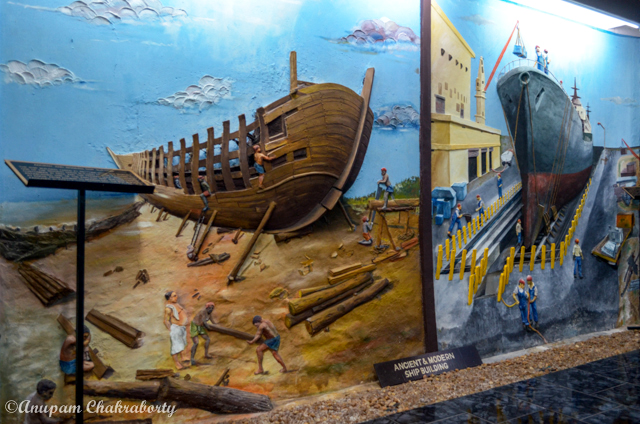 A display on ancient and modern ship building 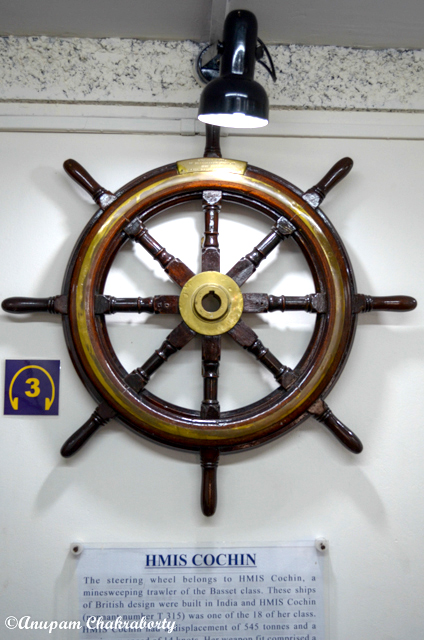 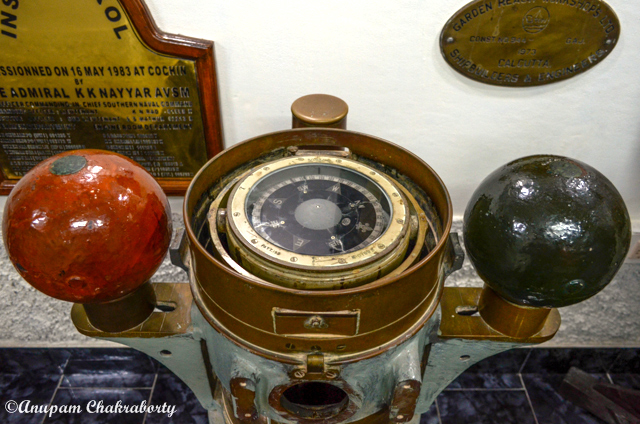 Compass of a ship 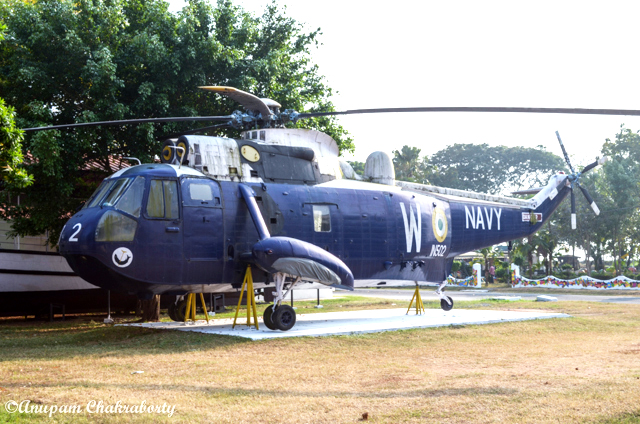 It is a catholic church. Located close to St. Francis Church, it is the principal church in Diocese of Cochin and hence it is also called the Santa Cruz Cathedral. This church was built originally by the Portuguese and elevated to a Cathedral by Pope IV in 1558. When Dutch conquered over the Portuguese in Kochi in 1663, they destroyed many Catholic Churches but spared this Cathedral. When British took over Cochin they demolished it. It then took over 100 years to build a new building at the same site in 1887. Pope John Paul II proclaimed it a Basilica in 1984. 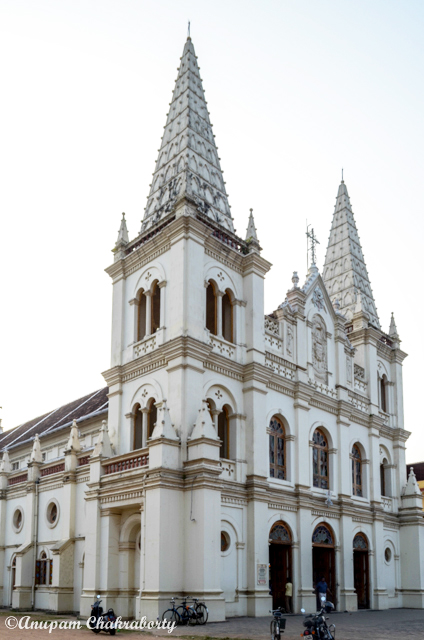 Bestowed with impressive grandeur and gothic style interiors, the Santa Cruz Basilica is a must see destination in Fort Kochi.

Some Pictures of Santa Cruz Basilica

It was the prayer time when we arrived there.

May God Bless All! 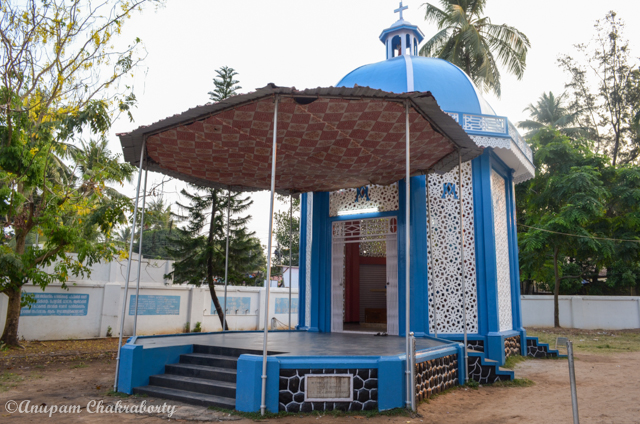 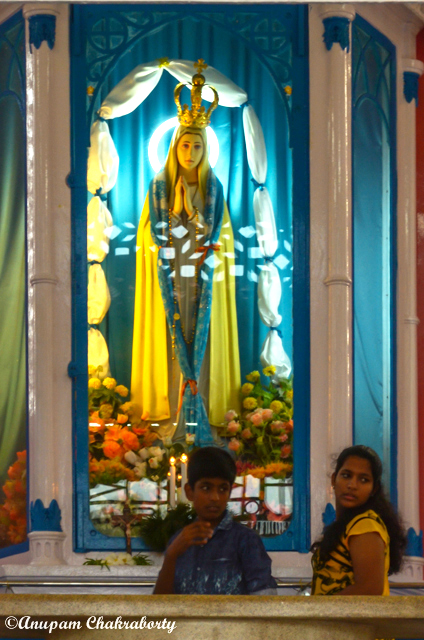 Statue of Our Lady of Fatima 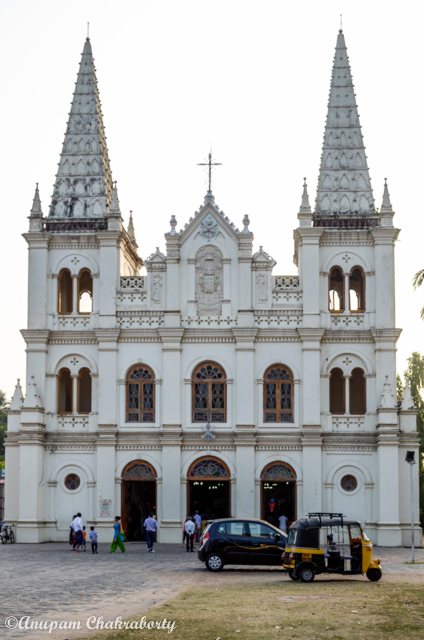 Santa Cruz Basilica is a Beautiful Cathedral at Fort Kochi

How would it feel if you get to see a Golden Royal Crown! We were standing very near to the crown while visited the Royal Palace of erstwhile King of Kochi. Located 12 Km from Fort Kochi, at Hill Place Road in Thripunithura, the former Palace now a museum, known as Hill Palace Museum is a worth to visit for seeing the golden royal crown. 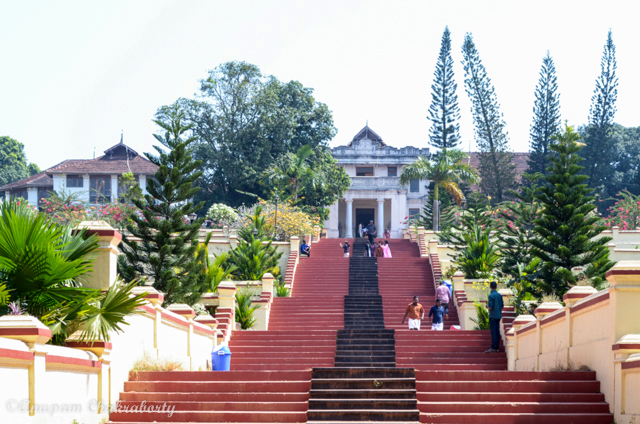 The palace has a good collections of paintings and artifacts exhibited in 16 galleries. Royal belongings, jewellaries, exquisite ivory works, horse drawn carriages, chariots, coins, weapons, palanquins and the most attractive and unforgettable Golden Crown of the King.

The Palace is now a museum

A Balcony of the old Palace

Camera (For use in the campus, photography inside not allowed): Rs.50/-

My cultural tour at Fort Kochi will follow shortly…

On the natural splendours of places in Kerala you will love to rest your eyes and believe that how naturally beautiful Kerala is!

Top Places to see in and around Fort Kochi was last modified: February 25th, 2022 by Anupam Chakraborty