We started from Vishakhapatnam at 6 A.M. in the morning. It was a chilly & windy day. We all were up by 5 A.M itself & kids were also ready by 5.30 A.M and were all having a jolly good time pulling each others leg. We witnessed an early morning Sunrise from the room. The early morning of the Ocean & Beach scenery was fantastic. The Sun cast its Red Hue before it made its appearance in the horizon at 5.58 AM. 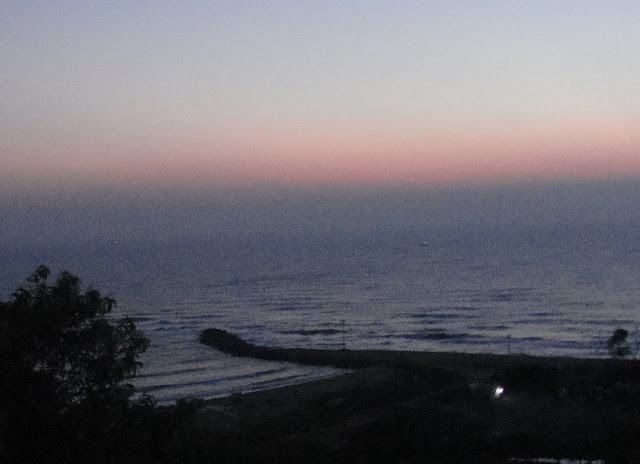 We took some pictures with our car and the beach scene in the background. Please note that it was very chill as you can see Uthamkumar & Shri Meenakshi trying to cover themselves up. 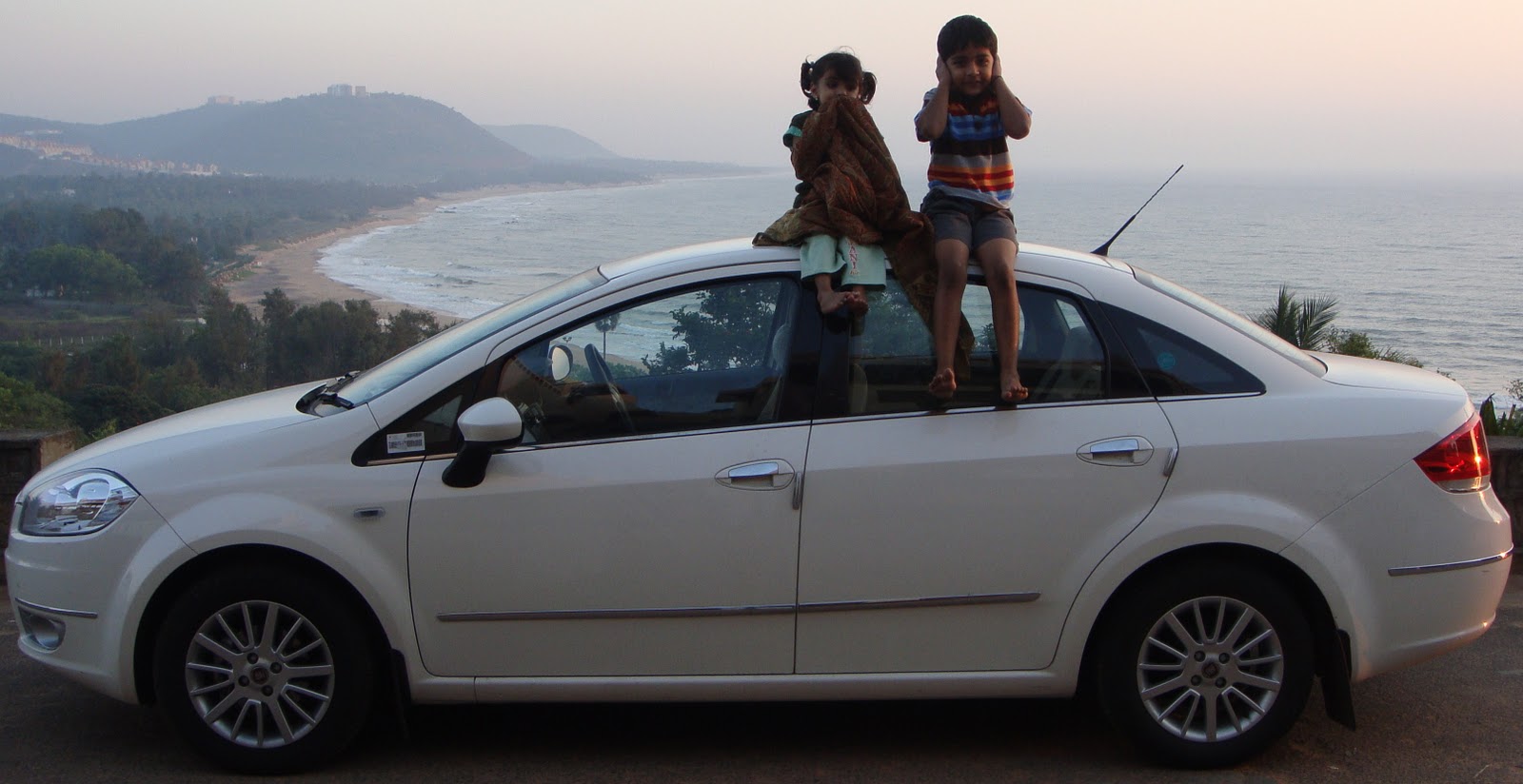 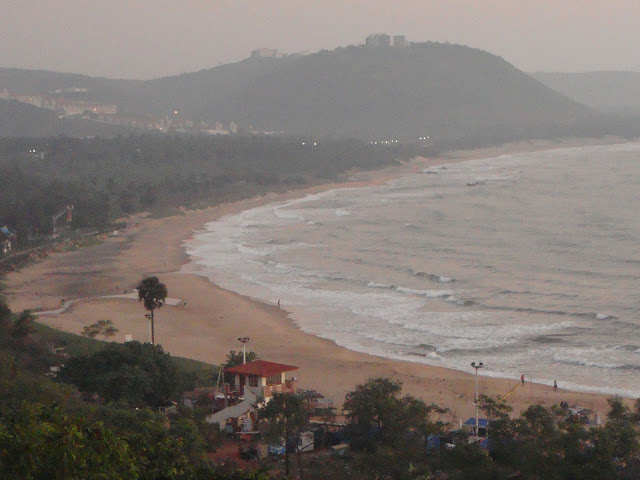 Just as we came out of the Resort the Most Popular Demand from both the kids was to visit the Rushikonda beach. So we went to the beach by 6.35 AM. We had a whale of a time watching the waves coming to us & kids playing around with Jamuna & all 3 running away from the waves and around the beach like 3 small kids and all in all it was real fun for all four of us till 7.15 AM. 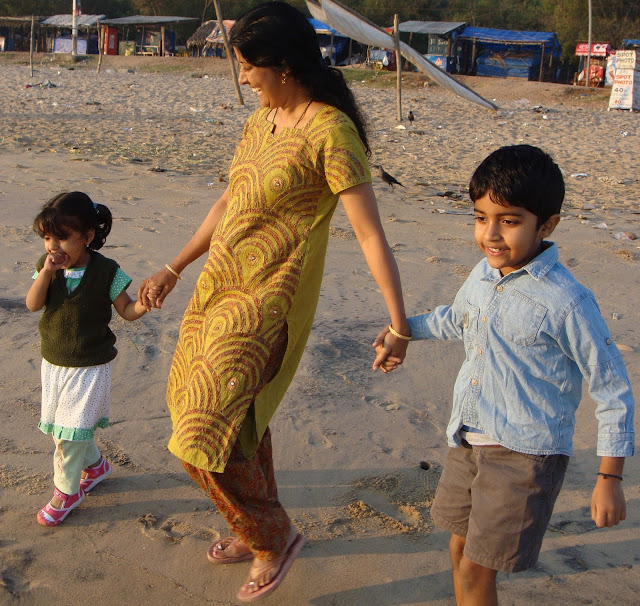 As soon as we started HVK called us and asked us our status. We said we are just coming off from the beach.
He said are you interested in visiting another temple SIMHACHALAM is near by in Vizag and we could pay a visit to the great Maha Vishnu Narasimha Avatar Temple & have darshan. We drove to Simhachalam and reached the temple by 8 AM. We had a very good darshan of Lord Narasimha. 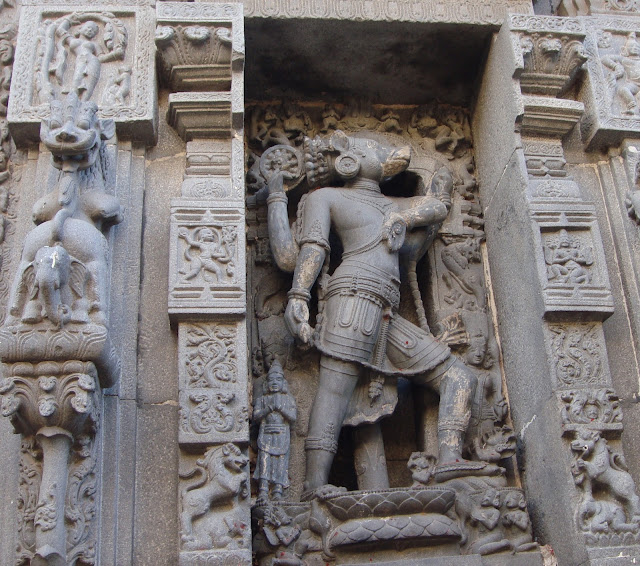 It is one of the eighteen “Naarasimha Kshetras” i.e. shrines of Lord Narasimha in India. This is a 11th Century Temple. Simhachalam temple is known as the second richest temple in India (after Tirupati) earning a revenue of Rs. 520 million. The statue of the deity gives “nijaroopa darshan” (holy appearance in true form) for only 12 hours in a year i.e. on Akshaya Tritiya day, the rest of the time the statue is covered with Sandalwood paste. The darshan described as ‘Chandana yatra’ or ‘Chandanotsavam’ falls every year in Vaisakha masa (May). Some photos taken of the temple from outside the garbha graha. Picture below is where the abhisheka water comes out. 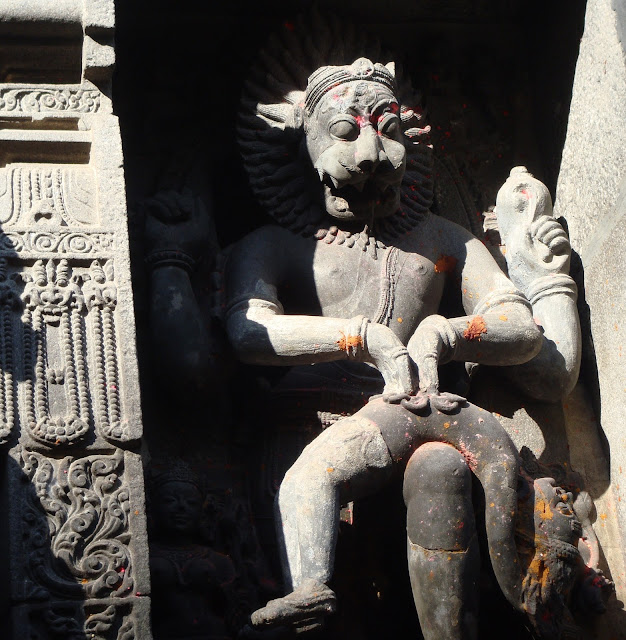 This temple is associated with the Asura King Hiranyakashipu & his Son Prahalad who was a great devotee of Lord Vishnu. Lord Vishnu slays the Asura King Hiranyakashipu in the man-lion Narasimha Avatar. Hiranyakasipu wanted to become immortal and hence performed austerities (tapasya) to propitiate Lord Brahma. However, Lord Brahma said that it was not possible to become immortal so Hiranyakasipu asked Lord Brahma to grant him a boon so that he could not be killed by any animal or a man neither in the morning nor in the night, by any weapons, neither in sky nor on the earth. By doing so he believed he could never be killed. Hiranyakasipu wanted the entire world to worship him. But, Prahalada, his son, was a great devotee of Lord Vishnu Narayana and always expressed his bhakti towards Him. In spite of warning him several times, Hiranyakasipu could not alter Prahlada’s devotion.This made Hiranyakasipu angry and he made numerous attempts to get Prahlada killed. One of them was to throw him off the top of a mountain. However, Lord Vishnu rescued him by moving the mountain and made a small path for Prahaladha. It is said that in the place where the Lord stood to protect Prahaladha is the place where the temple is built.

The most important thing about this temple is that here we can’t see the God’s feet. It is said that the feet is buried inside the earth. Lord Narayana came to rescue Parahalada on Garuda and when they threw Parahalada Lord Narayana jumped from Garuda to save him and in this process his feet went deep into the earth. Simhadri Simhachalam Temple has Sri Varahalakshmi Narasimha Swamy as the presiding deity. 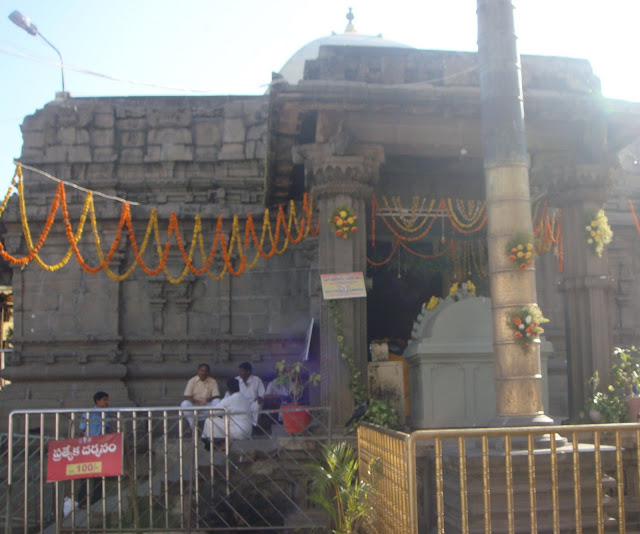 The Simhachalam temple faces West unlike so many other temples which face East. An east-facing entrance, according to religious belief, brings prosperity while a west-facing one brings victory.

After the temple visit we came out and here one can get confused whether to take right turn or left turn, so please enquire and confirm which road leads to the National Highway towards Bhuwaneshwar. I also got confused and took the wrong turn and later enquired and found my way back to the highway.

We hit the highway by 10.30 AM and we had a long way to go. The route was Vishakhapatnam, Anakapalli, Sreekakulam, Palasa, Icchapuram, Berahampur, passing through Rambha, Bhubaneswar, Bhadrak towards Kolkatta. We crossed Anakapalli by 11.40 A.M. and Srikakulam by 12 Noon Palasa was 58 kms away, Bhubaneswar was 300 kms away. We crossed Icchapuram at 1.25 P.M. 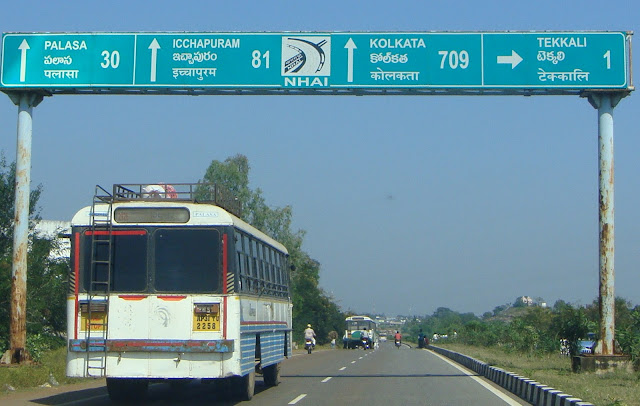 En route we took pictures of the hills, highway and interesting things. We also crossed the dreaded AP Orissa Border without any issue, luckily for us we did not have any traffic jam. Both the kids were asleep. This place can become totally jammed up & HVK had cautioned us that people were stuck in such jams for half a day and very close to a day. He even told in case of any traffic jam to let him know he could suggest alternate roads through villages. Luckily for us we passed through the AP Orissa border at around 2 PM afternoon. 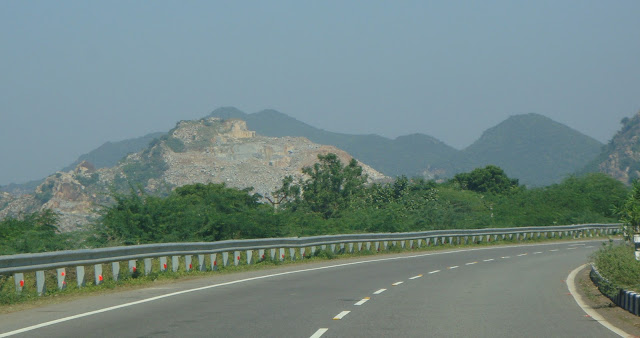 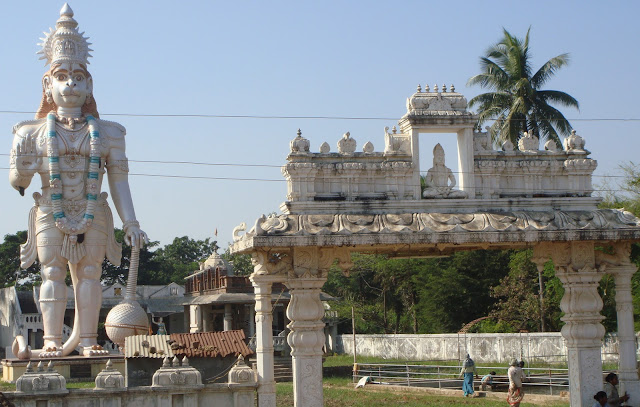 Rambha is the first major town we came across in Orissa State at 4.35 P.M. We informed our status to HVK. HVK joked with us not to associate this name with the Tamil Heroine RAMBHA (known here in Tamil Cinema as Thunder Thighs) and rather associate the name with the Celestial Dancer from Lord Indra’s court (he said remember the 3 damsels in the Heaven Rambha, Urvashi & Meneka). We had a good laugh.

You will find a sign board here PANTHANIVAS Rambha on Chilika Lake. Chilika lake (Famous for its special verity of Irawadi Dolphins) is very near from here. HVK had suggested to us we can visit this lake on our return and we should just drive on.

We crossed 2 railway crossings here. The second railway crossing had a MAHA speed breaker with a pot hole in front of the breaker and I scrapped the bottom of my LINEA it sounded very bad. I was very upset hoping the oil sump would not have got hit or damaged. I was wondering whether the low ground clearance of Linea would be an issue in such cases.. 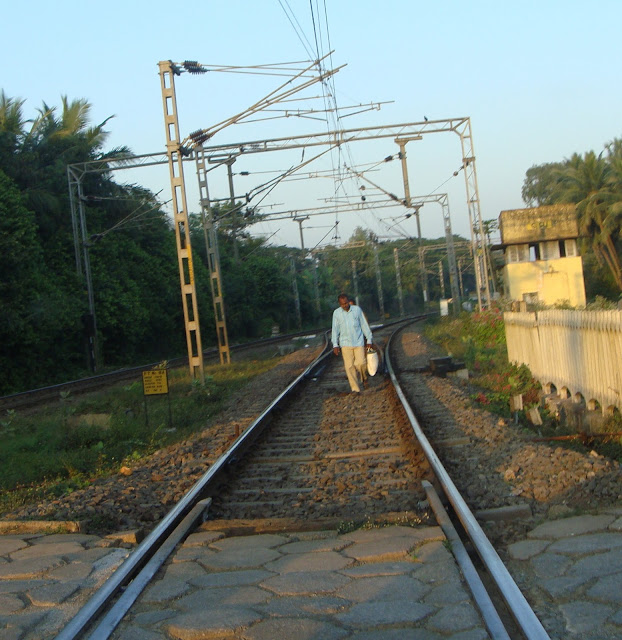 We were quite upset and hoped there would be no damage. Luckily the undercover protection guard metal plate provided by FIAT is thick enough to withstand such issues & is really very thick to protect the Car’s bottom engine bay portion.

At 4.55 PM we had pulled over the side of the road for some Bio Break. I took some interesting photos.In this part of the world local people use one side of the highway for all their agriculture use, they use the tarmac for cleaning their paddy and separating the rice from husk by running tractors / bullock carts on the huge mounds of husks freshly brought from the farms. You can’t say anything except be happy that at least they are kind enough to leave one side of the National Highway to the motorists. Else it would have been a bicycle ride for all. This is Cycle country. 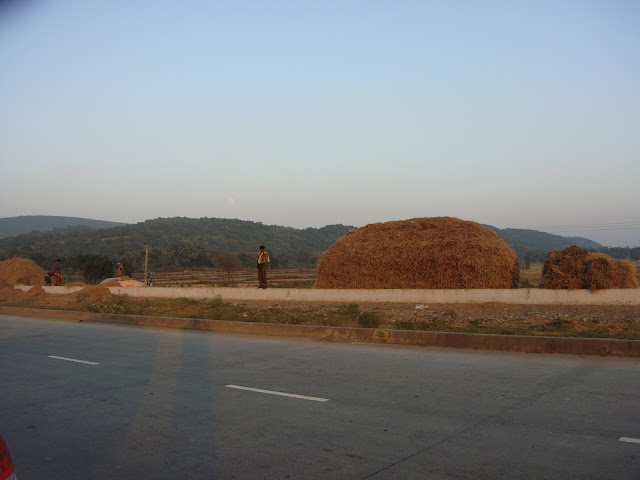 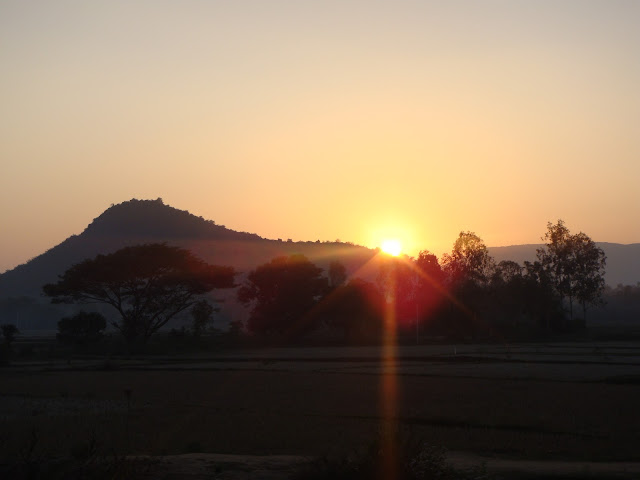 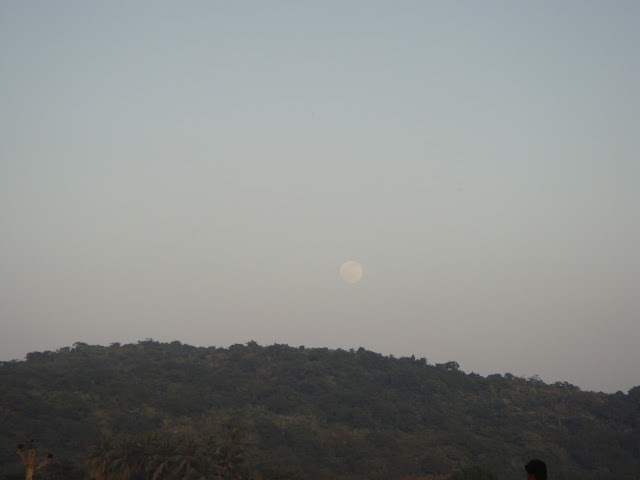 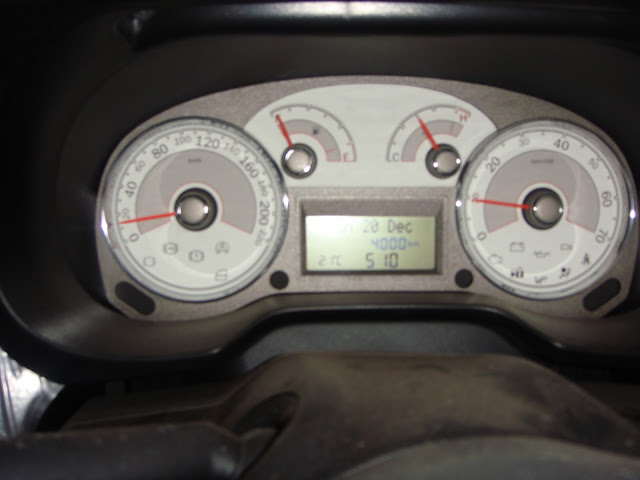 At 7.15 PM evening it was dark & we had 30 kms to go to Bhubaneswar & 155 kms to go for Bhadrak. HVK asked us what we are planning to do halt at Bhubaneswar or push for Bhadrak. I said we will push further on for Bhadrak another 3 plus hours of driving. At 9.50 PM night I still had to cover 96 kms to Bhadrak. It becomes very dark in this part of the world. 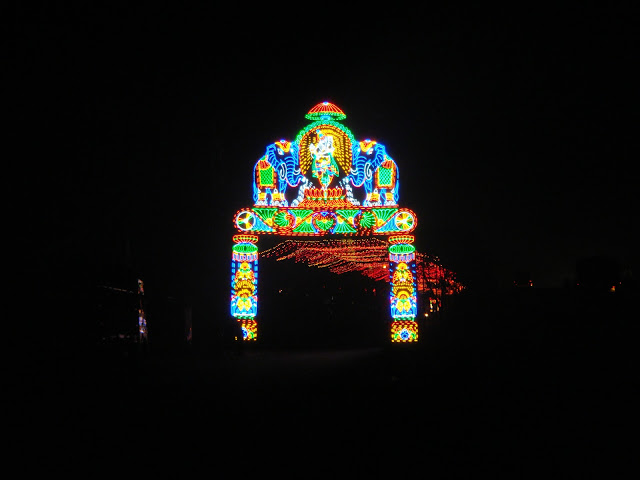 HVK was again kind enough to SMS to us Hotel Dixit which is a Motel just on the side of the National Highway. I called up this hotel & told him that we are on the way & to keep the hotel door open as well as inform the watchman and we will reach by mid night. You can clearly see this hotel it is right by the side of the highway.

Finally we reached Bhadrak at 12 Mid Night and luckily we were able to wake up the watchman who also had decided to sleep due to cold climate outside. We managed to wake up the sleeping on-duty manager and they were polite enough not to curse me for checking in at an ungodly hour with a lady & 2 kids. I was tired. The hotel was O.K. and the tariff was Rs.550/- per night. We just came in cleaned ourselves and crashed in the bed. 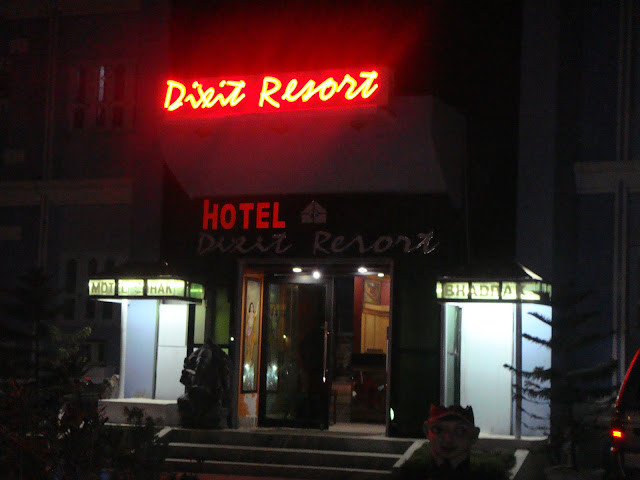 Little Shri Meenakshi was in a bit of bad mood as her sleep was disturbed and it took some time for us to settle her down. There were mosquitoes also in the room for good company and were really rocking. Make sure carry your own Mosquito repellent like All Out / Good Night etc (liquid/Mat/Cream etc) and also make sure carry a small night lamp else you will be left in total darkness inside a hotel room when all lights are off and you will be doing samba dance with the mosquitos.

Also make sure to remember to take your Mosquito repellent & night lamp before you check out of the hotel. I was kind enough to leave my mosquito repellent liquid behind during my 1st trip in 2008 – 2009 and got scolding from you know who. Well such small lessons learnt the hard way wont be forgotten that easily in life.

The hotel details are

This was the close of Day 3. Watch out for Day 4 soon.

The Land of the Thunder Dragon (BHUTAN) – Day 3 was last modified: August 14th, 2020 by Mahesh Natarajan

My business schedule didn’t allow me to make a voyage to one of the ultimate destinations of Kenya – The Masai Mara. So I decided to explore nearby areas in the next Saturday. We took a taxi (booked by the hotel) and started off for a place named Utamaduni Craft Centre (http://utamaduni.com/). One of the specific reasons to go there because that place specializes in African native crafts and arts, and has a huge collection of all varieties. Reaching there I realized that was indeed a great decision to arrive here – the assortment is really so remarkable. Collected a few souvenirs from there as well.

After spending a couple of hours there, we headed to another nearby place Kazuri Bead and Pottery Factory (http://kazuri.com/). They are supposed to be one of the largest manufacturers of clay made beads and pottery works.

The place is really a heaven for ladies, specially who fancy the jeweleries made of beads and clays.