Some 20 years ago, during one of my annual summer holidays, I remember visiting Somnathpur with my grandmother and a van load of relatives. We had driven down from Bangalore, stopped at Bandipur National Park for a few hours to watch wild elephants, took a peek at KRS Dam and somewhere along the journey stopped briefly at Somnathpur. I had not seen anything like this before and the impression is greater when you are a boy who has travelled very little outside the usual haunts of house and school.

We spent perhaps only fifteen minutes at this temple. I was just beginning to admire the sculptures when it was time to leave, too soon. I had this vague idea that someday I would return to this temple at Somnathpur. It has taken me 20 long years.

In those days, you could drive close to the temple walls and enter into the inner courtyard via a small doorway. Suddenly, before you have a chance to expect anything, while you are still thinking of road and journey, you are surprised. In the center you would find the profusely carved temple standing on an elevated platform of a stellate shape. Three vimanas top the stone structure. The inner courtyard is lined with a continuous stone-pillared corridor with numerous shrines. 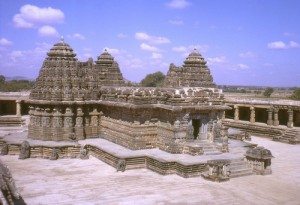 Today the experience was quite different. A good garden surrounds the temple complex. Nice palm trees have been planted. Neat lawns and manicured hedges of box lead the visitor to the temple. The temple is as beautiful as ever but the element of surprise was missing for me. I believe that you can visit any place only once. Every other visit is different because you have changed and the place has changed.

I started by walking the corridor and looking into each of the small shrines, expecting naively to find a deity in each one. In the first shrine was a Godrej steel cupboard! The second shrine was being used as a storage area. Many shrines were empty. Some had broken remains of stone sculptures. The main temple has all the interesting details. 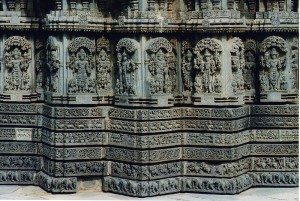 The temple was built in 1268 AD and is in Hoysala style of architecture. It was initiated by an army commander, Somnath. Those who have seen Belur and Halebid will not be easily impressed. There is still enough here to make a visit worthwhile. There is that characteristic friezes of elephants, horses and horsemen, creepers, scenes from the epics, makaras and swans – built in that order from bottom to top. Above these are the aediculae installed with images of gods and goddesses, and topped with decorated canopies. There are reliefs of miniature vimanas in both North and South Indian styles. One recurring motif is the pointed cone which is found in the eaves of aedicule canopies, vimanas and amalakas. The actual vimanas at Somnathpur are unique and symmetrically arranged. Nothing similar exists in Belur or Halebid.

Many pieces have been signed by their sculptors, a practice not seen commonly in other Hoysala temples. It is said that sculptors were organized in three groups – those that cut the stone into blocks suitable for sculpting; those who sculpted the design into a coarse form; those who filled in the fine details, a highly skilful job that was done after the stone had been installed on the temple. Today we can see some parts of the temple without the fine detail, exactly how the second group left it.

A temple like this cannot be appreciated by a cursory look. You have to study the details. You have to imagine yourself to be a medieval sculptor trying to make face and form where there is only blank stone. You will then see how a lotus stack is held between the forefinger and the thumb. You will then see how anklets find their fitting shape at the feet of a goddess. You will see how leaves grow out of stone as naturally as out of any living plant. 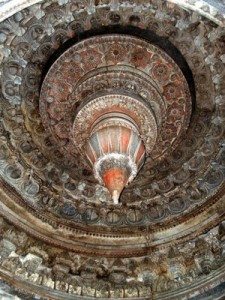 The best part of the temple is on the inside because nothing as varied and magnificent exists elsewhere. Besides the three superb Vaishnavaite images and two stellate pillars, the interior has a set of sixteen ceilings, each one different, each one packed with carvings in numerous variations. There are some famous ones that resemble a banana flower in different stages of inflorescence. There are concentric circles, one linked to the other by stone ribs. Likewise, there are octogonal ceilings. All these are built on the image of a lotus opening up from its bud to outer rings of petals. 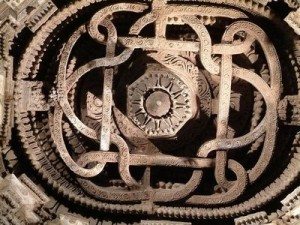 Two ceilings intrigued me the most, each one in a different pattern. They had a continuous strip of stone with carved relief. The strip is interwoven in such a way that a symmetric pattern is made. There is no beginning or end – the strip joins the point where it starts. What’s more, when one segment goes above another, it goes below the next at the next intersection. In this manner, it alternates in its movement, sometimes revealing, sometimes hiding. This is exactly what in mathematics we call a torus knot in knot theory. What I saw today is much more complex and there is no easy equation to describe it. It is not clear if this was carved from a single stone, which would make it an enduring masterpiece. What we see today are restored versions of the original and restoration has not done a good job.

Somnathpur is smack in the middle of rural Karnataka. There are a handful of buildings and the only attraction is the temple. It’s all fields and orchards around Somnathpur. It’s a great place to get away for a day and easily accessible from Bangalore by car. It took me three hours to see the temple to my personal satisfaction. Certainly it was not as rushed as my first visit and just as memorable.

While recently listening to the above gazal of Ahmad Faraz,by Mehdi Hassan,the line ”jis tarah sukhe hue phuul kitabon mein milen” jogged my memory about the old faded travel photographs of years gone by lying, for decades, in the trunk in the basement.