To re-cap, we began our journey from Delhi and after Shimla, Sarahan, Narkanda, Chitkul, we were last at Kalpa.

Day 5: Dhankar Monastery, Key Monastery, Kibber, Pin Valley, Kaza
Up early in the next morning, lovely breakfast in the hotel makes a perfect start to the day. The morning time is especially very beautiful in Himachal, lovely clear blue sky, with beautiful little birds chirping and flying all around. After getting fresh, our first target was to visit the Tabo Monastery. It was around 8AM, the monastery temples were still not open, but the monastery gate was open. Along with us there were another 5-6 foreigners who were there to see the monastery. So till the time the monastery temples were open, we saw the entire monastery. Considered to be the oldest and the best monasteries in the entire spiti valley, the Tabo Monastery is huge with around 9 small small temples and in a huge area. It was established around 1000 years back.

Monks with Mom and Dad

Since there still some time before the temple opens up, we chipped in for a tea and sandwich in the near tea shop. Oh boy there were some beautiful children around. I really stopped few of them and took their snaps. 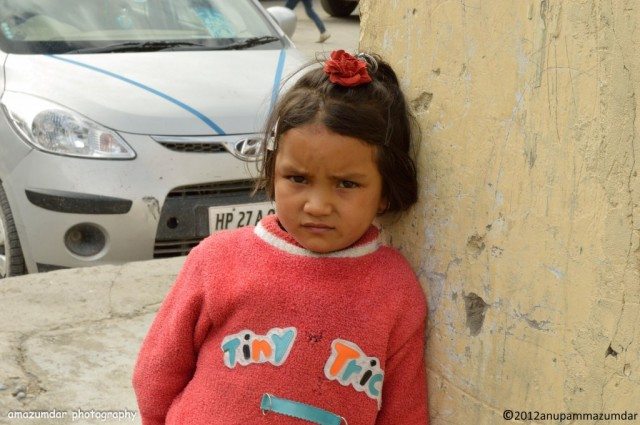 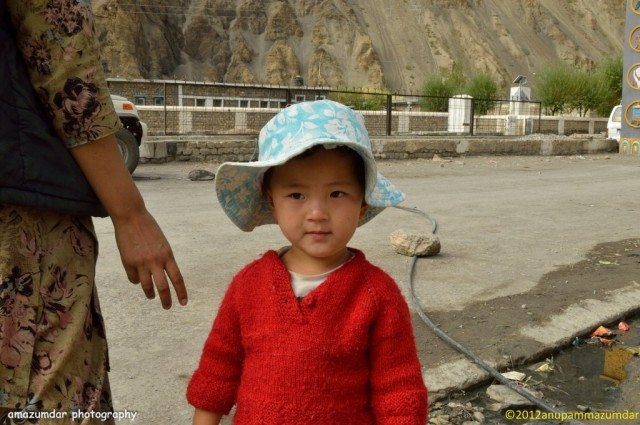 We went to few more places in the village, before around 10:30 AM it was time to leave for the next destination.
Our next destination was Kaza, the sub divisional headquarters of Spiti Valley at an approximate height of 12000 ft. and we planned to cover Dhankar Monastery, Kibber, Key Monastery for the day and off course the lovely town of Kaza. As we move towards, Kaza, the road becomes more beautiful, the valley becomes more adventurous and beautiful and we reach up more height. Normally it is not recommended to go at such heights if you have breathing problem or heart problem. 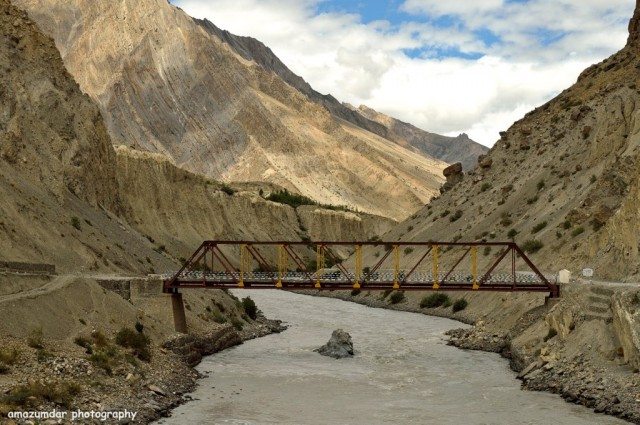 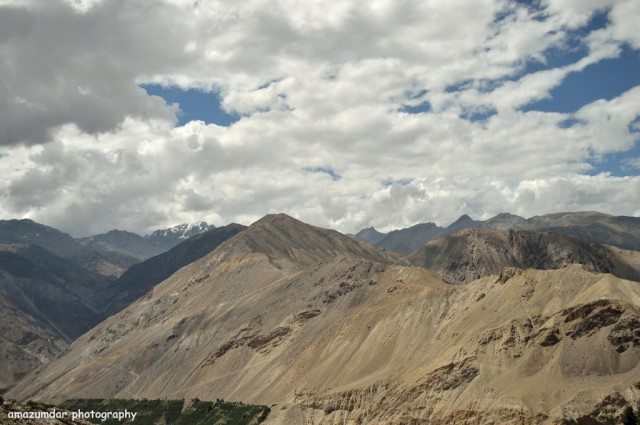 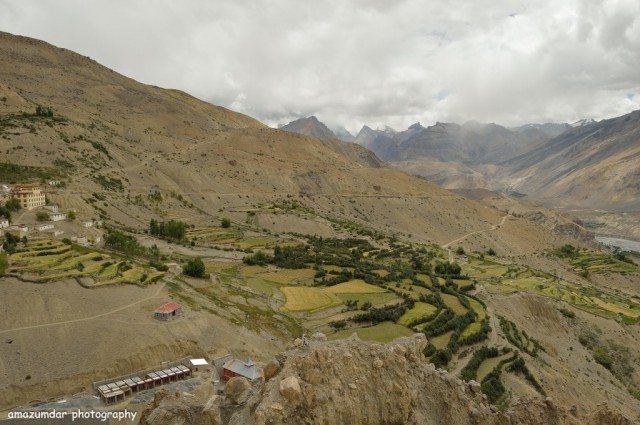 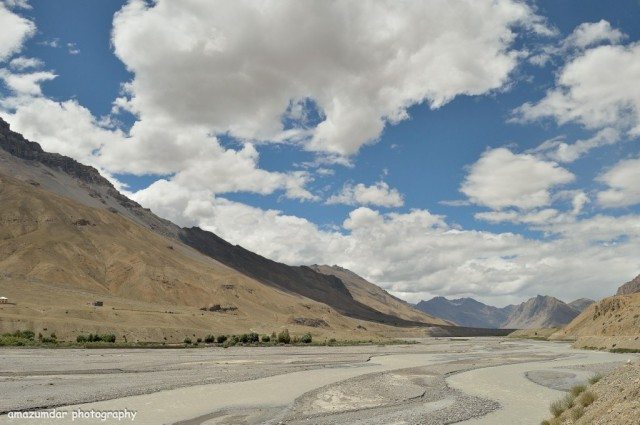 And make sure to keep your eyes out of the window of the cab. The view will be different every moment. Even the view of the spiti river changes with every moment. Along this stretch, Spiti sometimes is with full flow, specially in places where distributaries meet the river, while at some places, Spiti looks dry but beautiful. 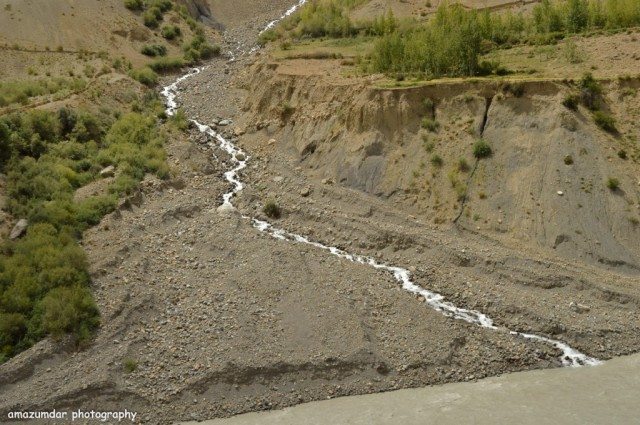 On the way to Dhankar Monastery 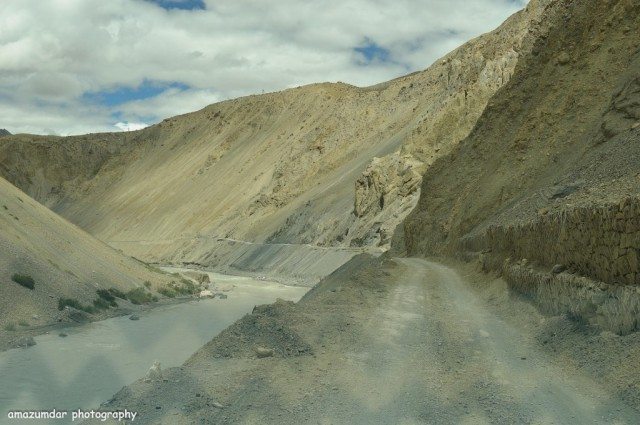 Sometimes the mountain peaks look like glazing as if the peaks are burning, while at some other places with snow tops 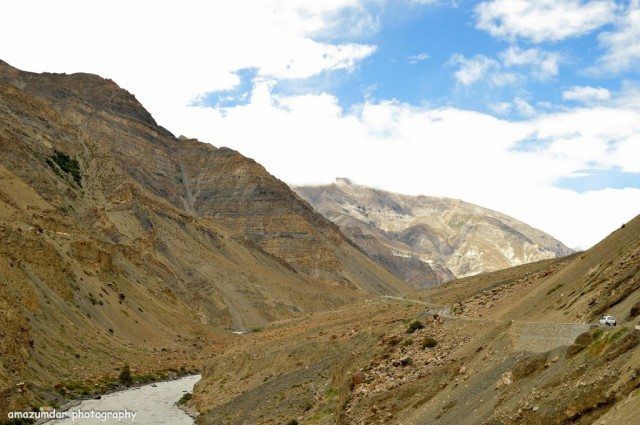 After around 2 hours of drive, one reaches the Kaza Bridge which takes the route for Kaza. But we left the Kaza bridge near Shitlong village, to take the route to Dhankar Monastery. 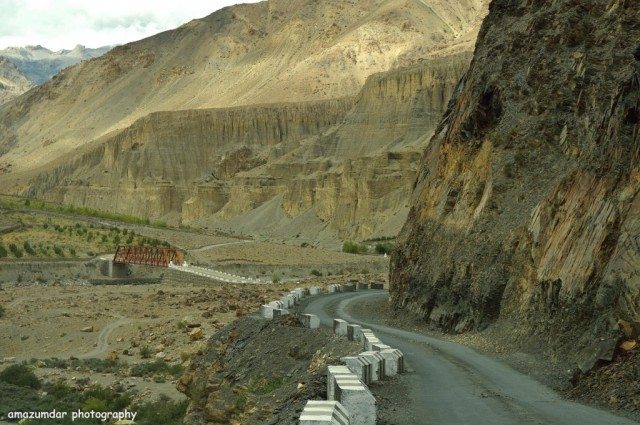 On way to Kaza

Dhankar Monastery is at a much more ahead of Key Monastery, so Lekhram’s route was to cover Dhankar Monastery first and then come back to Key Monastery. We reached Dhankar monastery by around 12:00 PM. Although vehicles can go much up, but Lekhram kept the cab at a considerable lower place, so we can trek a bit. I and my dad went up trekking into the monastery around 200-300 meters. 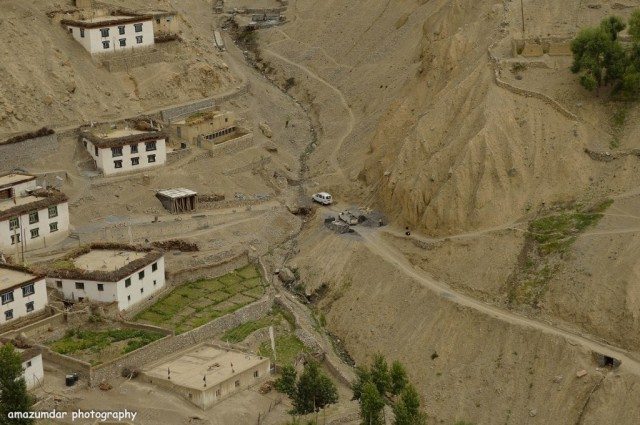 Trek to Dhankar – Our Cab down below 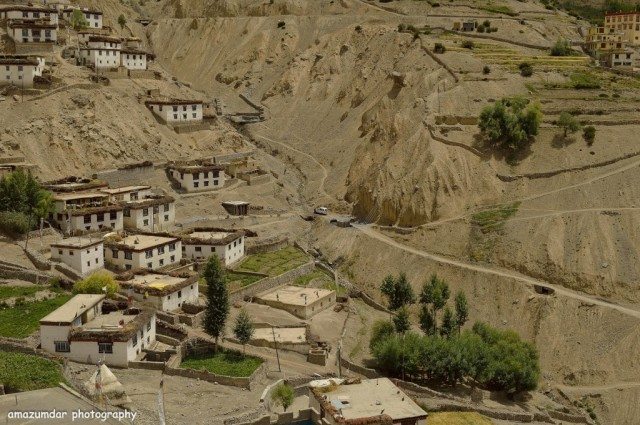 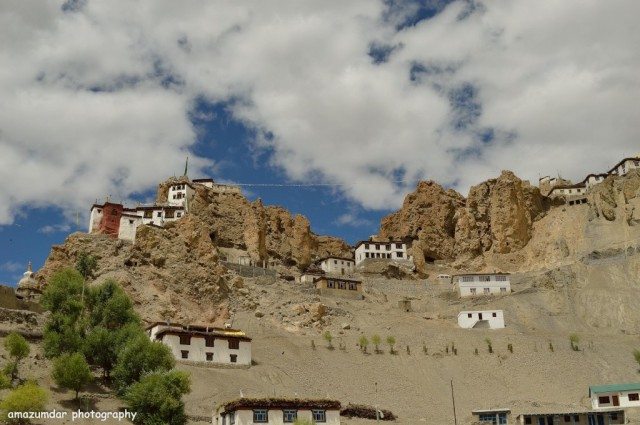 Closer view of Monastery while way up

It’s a lovely monastery with the monks all around at a height of 12774 ft. specially the view of the spiti valley and the amazing spiti river from that height. The monks are always available to explain you everything about the monasteries. Since the number of tourists in Spiti is always few, you always meet up the same people again and again, and mainly foreigners.
Taking snaps inside the monk is prohibited, so I did not waste the opportunities to take pics from outside and the valley. Spent around half an hour in the monastery, before getting back into the cab. 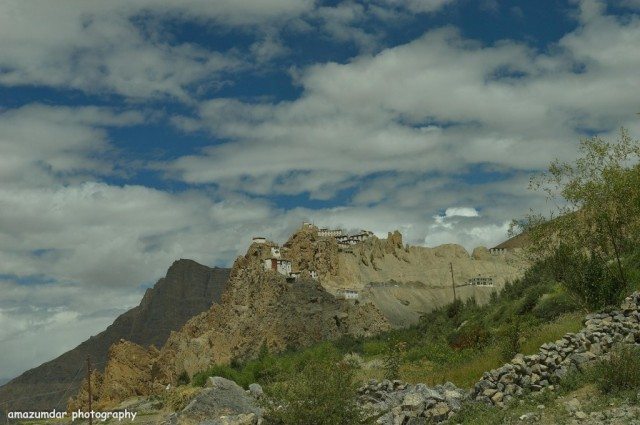 Dhankar Monastery from where we parked 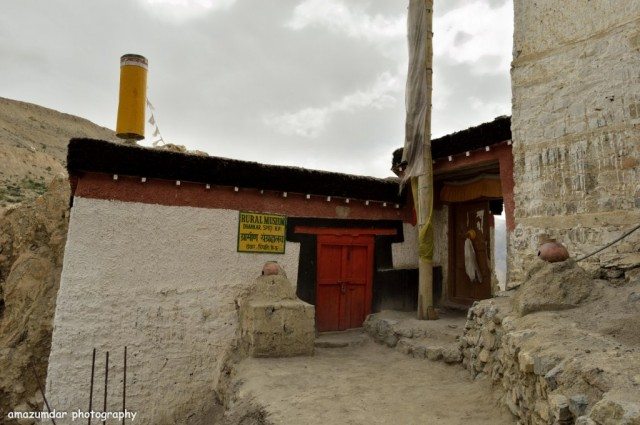 There is an opening on the back of this monastery from where one gets the best view of the valley.

View of Spiti from Dhankar 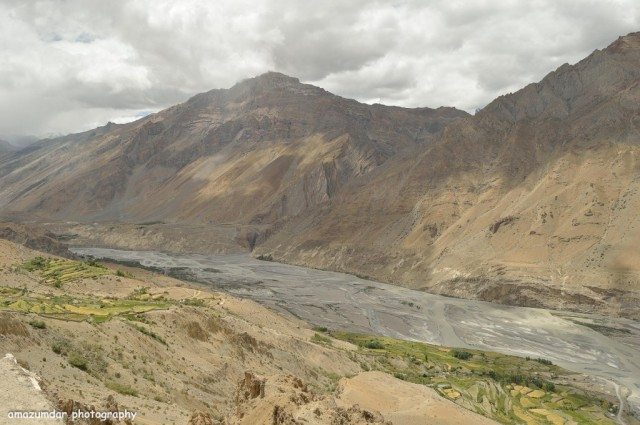 View of Dhankar Valley from the Monastery

It took us around another 20-25 minutes to cover this monastery and around 1 PM we got back into the cab. From Dhankar Monastery it took another hour or so to reach Kaza via the Kaza bridge at Shitlong village as I mentioned early in the write-up. Kaza is a lovely small city in the Spiti valley and is the district headquarter at a height of around 11500 ft. By 2PM, we checked in into a hotel after some searching. It was a beautiful hotel, located at a nice location right beside the Kaza monastery. Time was stretching, as we had to cover Kibber also the same day. 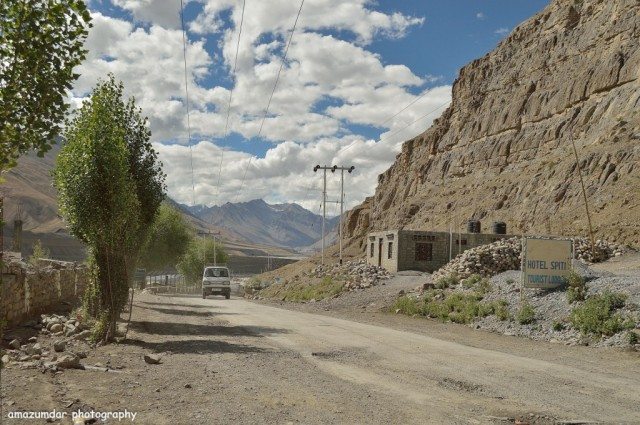 We quickly ordered our lunch, we were really hungry. And after half an hour of rest, we started for Kibber around 14 KM from Kaza but because of height, it takes time to reach. The plan was to cover Kibber and then Key Monastery (which is around 7 KM from Kaza). Key monastery was on way and sideways, so accordingly Lekhram took us first to Kibber, while coming back we were to visit Key monastery.

Kibber is almost at a height of around 14500 ft and a very beautiful village with lovely people, greenery, farms. These small small places are fully developed, with lovely houses, and government schools which implies full education. Approximate population of this village is around 300. 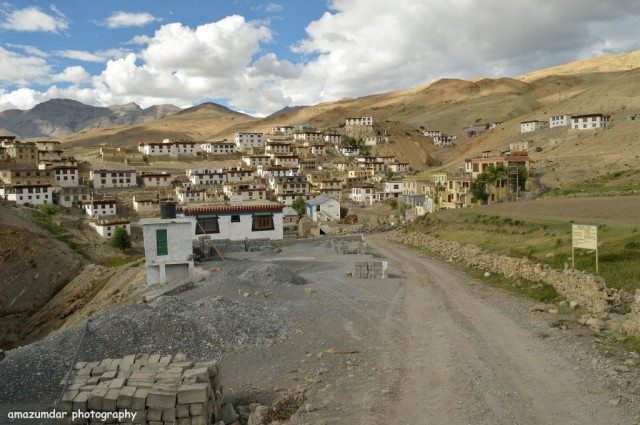 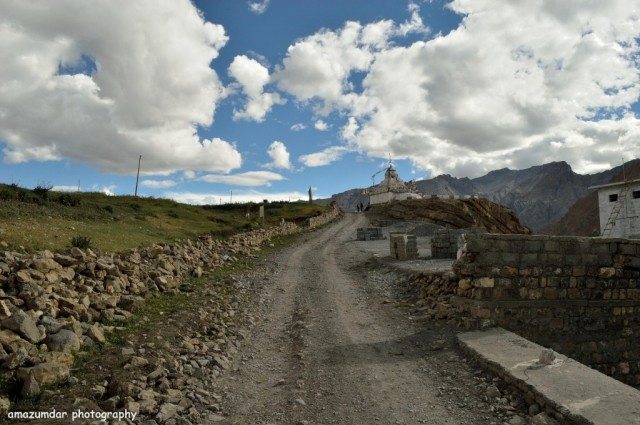 The overall view of the Kibber village is simply awesome. Lush green surroundings, lovely village and a lovely view of the valley. 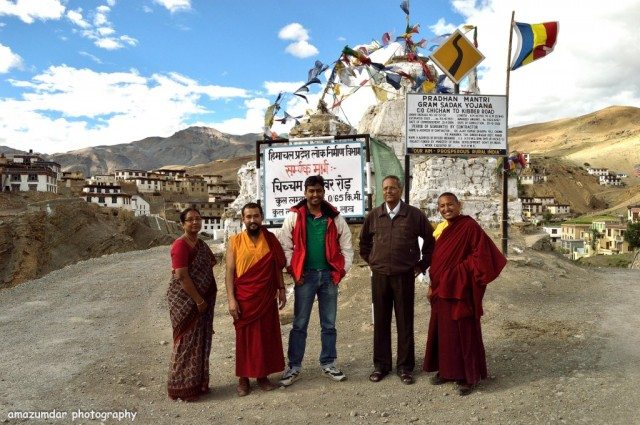 With Monks At Kibber 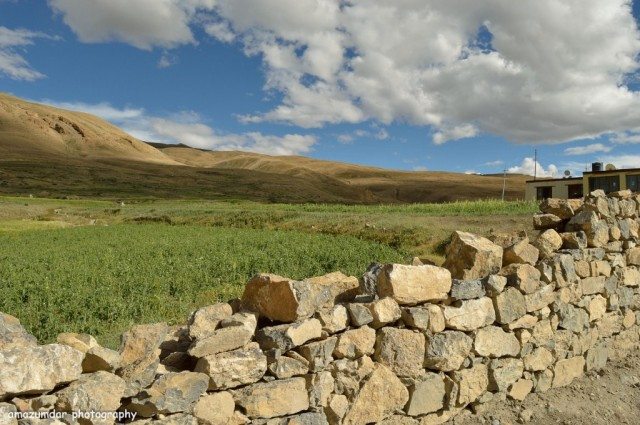 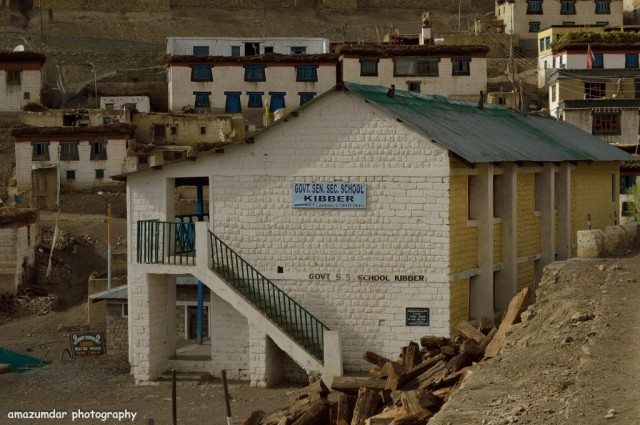 All facilities are available

Next destination was Key Monastery which is on way back to Kaza, but situated on slightly different direction. Situated at a height of around 13500 ft, Key Monastery is the largest monastery at such a hill top and is a tourist’s paradise. 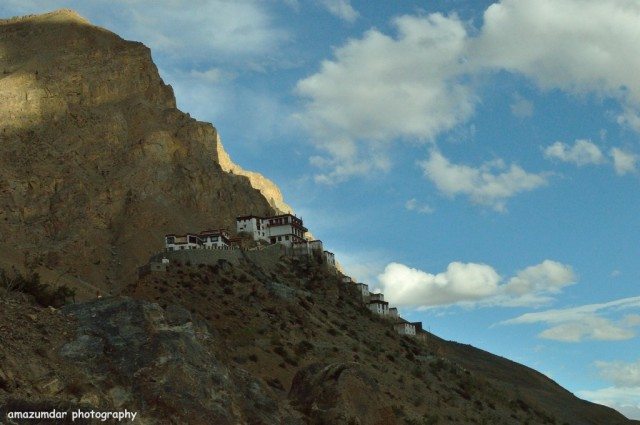 The route to these monasteries are on the edges and quite dangerous. But one will love to zip through these routes. The Key monastery at such a height provides another gorgeous view of the Spiti River. Apart from that, it is the biggest monastery at a hill top, and beautiful inside. 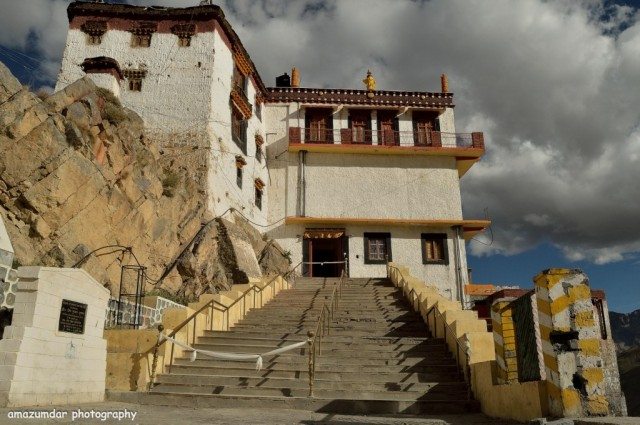 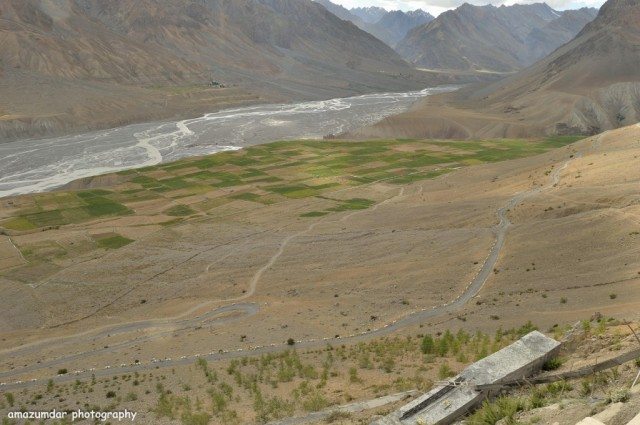 Ki Monastery is different from rest of the monasteries. It’s big, wide and more open. It also houses the maximum number of monks inside the monastery. The entire coverage of Key monastery was done by around 5:30 PM and we were back on cab for Kaza. We did not directly went into our hotel, but decided to visit the kaza city. The Kaza market was good with everything available. We had a lovely cup of tea and few snacks for the evening in the market. We found few of our old foreigner friends we met in Tabo also in there. After completing a round of the market, we went in for the Kaza monastery. 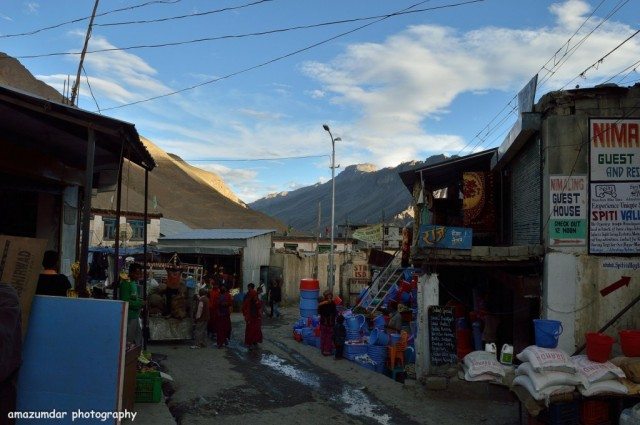 It’s a usual monastery but a good one. Since it was already around 6PM, it was close, so only the main gate was open. There were lot of kids playing around and I took few lovely snaps of the kids playing in the Kaza monastery. 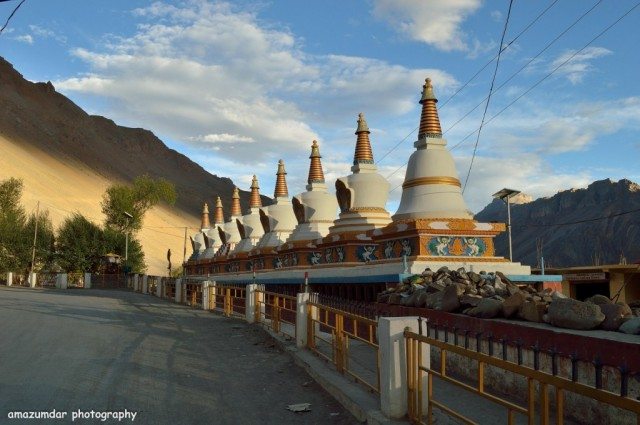 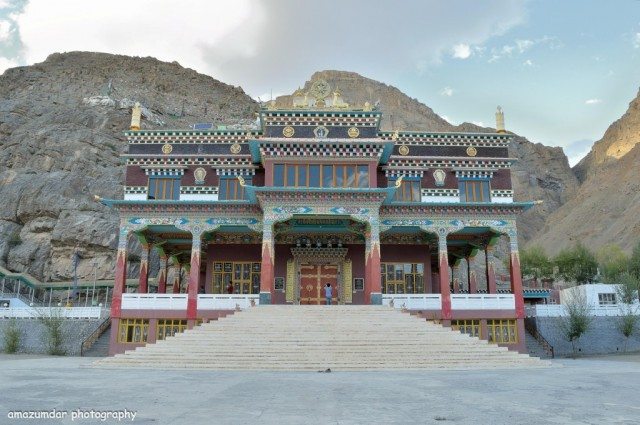 Another couple of hour and we were back to our hotel room. Lovely evening tea, followed by snacks and preparation for our next day’s journey for Manali via Rohtang Pass. We never knew, but the next day was going to be the best as well as the worst part of our journey.

Next morning I was up @ 05:30 Hrs & dived out of bed to see some positive signs of relief but the scene was frustrating & heart breaking. The conditions were totally overcast with little rain. Few Peaks were not even visible & were fully covered under the mist. On the other side of Bhaga River some mountain tops received fresh snowfall in the night.