The month of January ushers in along with the New Year gorgeous weather throughout South India bringing us respite from the heat. Also mid-January is holiday time in Tamilnadu, where we celebrate Pongal, the harvest festival. Usually at this time of the year, me and my better half, make use of the vacations taking off to some beach destinations which usually means Goa. But the beach theme had begun to get repetitive and this time we both wanted a change. Our first idea was to do a trip of Navagraha temples in Tamilnadu, but since they will be too crowded by locals during Pongal and considering Kerala was a strict no-no during the peak Sabarimala season, we shifted our sights towards the temples of Karnataka.

Having settled on Karnataka Temples as our destination, I then proceeded to finalize the itinerary by choosing the important destinations, avoiding places which we had visited in our earlier trips. The famous temple route of  South Western Karnataka is Mangalore- Subhramanya-Dharmastala-Hornadu-Sringeri-Kollur-Udupi-back to Mangalore. This round trip needs at least three days if every place is to be appreciated fully. Murdeshwar beach temple can be included too if one has more time.
Since, we had already visited Kollur Mookambigai temple, Sringeri and Murdeshwar in our earlier visits(My earlier post: Murdeshwar, Sringeri Trip in Feb 2011), after extensive scouring of Google Maps, I decided to cover the temples in this order: Mangalore junction to Kukke Subhramanya-Dharmastala-Belur-Halebeedu-Horanadu-Kalasa and back to Mangalore. Chikmagalur was decided as my halting point during the trip as it was the biggest town on the route with some decent accommodation. I booked a Tata Indica cab for our three day trip at Taxiforsure.com. Their rates were reasonable at Rs.2000 per day  for 250 kms incl. driver charges.
We departed on 13th Jan from Tirupur at 6.50 pm by the West Coast Express. Half the folks in our compartment were heading towards Goa and were having a boisterous night, leaving us with a feeling of envy and jealousy, wondering whether we had made the right decision to get on this temple trip. All those thoughts vanished as the train arrived in Mangalore right on time at 4.45 am the next day. We checked into a hotel near the station and freshened up . The taxi service we had booked was very professional and our driver, Altaf, having confirmed our arrival by phone, reached our hotel at 6 am.

With the chill of a dark winter morning still clinging to us, we started our journey to Kukke Subramanya temple, 105kms from Mangalore. I soon got chatty with the driver who was a Mangalore local and conveyed our desire to have tasty food unmindful of the ambience or the location of the restaurants. He understood our preferences and stopped at a roadside eatery, 30 kms into our journey at Lakshmi Nivas (K.T.Hotel), in a small spot called Kalladka on NH 48. We could see many Bangalore registered cars parked in front of  the small hotel at that early hour which showed its popularity. The hotel was packed to its capacity and the taste of their super soft Idlis, Aloo Pooris and Dosas tasted divine. The bill for three was an unbelievable 85 rs. With both the stomach and heart(not to mention the wallet) thoroughly satisfied, we drove through pretty decent roads to reach Subramanya at 8.45 am. 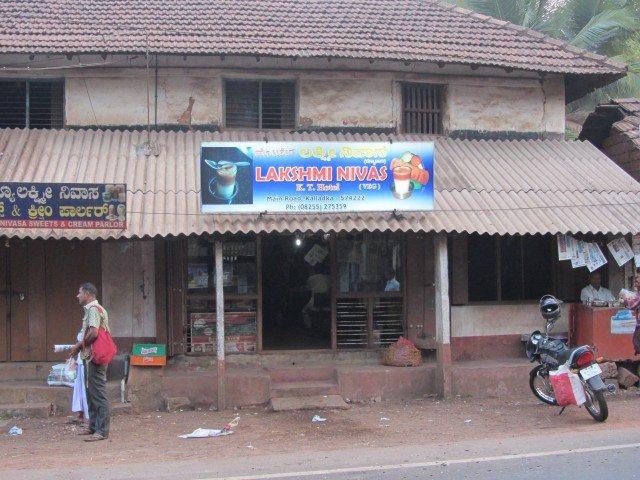 The eatout that left us wanting more...

Kukke Subramanya temple is one of the most revered pilgrimage destinations in Karnataka. Here Lord Subramanya is worshipped as the lord of all serpents. The devotees enter the courtyard of the temple from the main entrance at the back and walk around to go before the deity. The main deity inside the sanctum sanctorum consists of the idol of Lord Subramanya at the upper Dias, then the idol of Vasuki and at a little lower level the idol of Shesha. Devotees from all over India come to this temple to perform sarpa samskara poojas to get rid of sarpa dosha. Sachin Tendulkar’s visit to this temple a few years ago further increased its popularity. Some of the pictures we clicked at the temple. 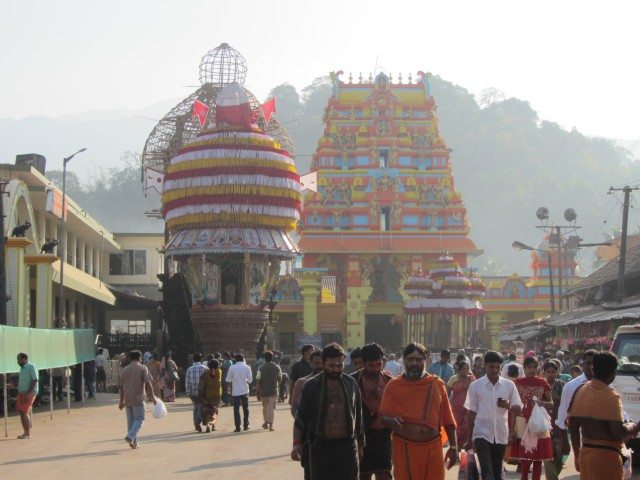 Subramanya temple along with the temple chariot 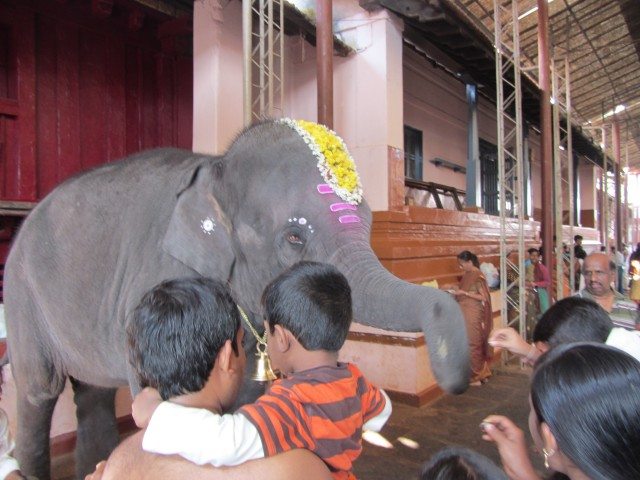 Baby elephant inside the temple 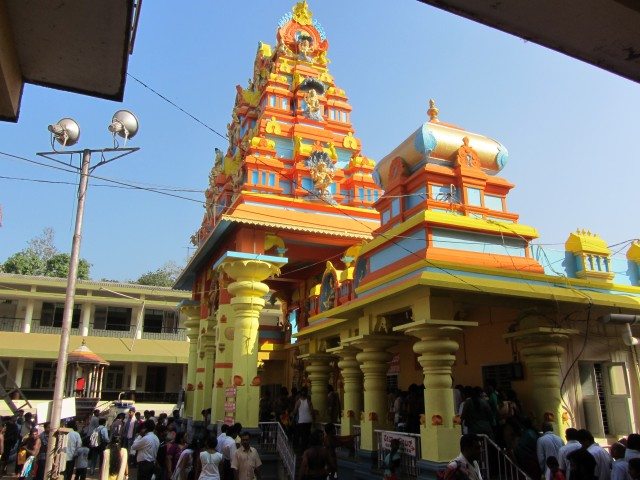 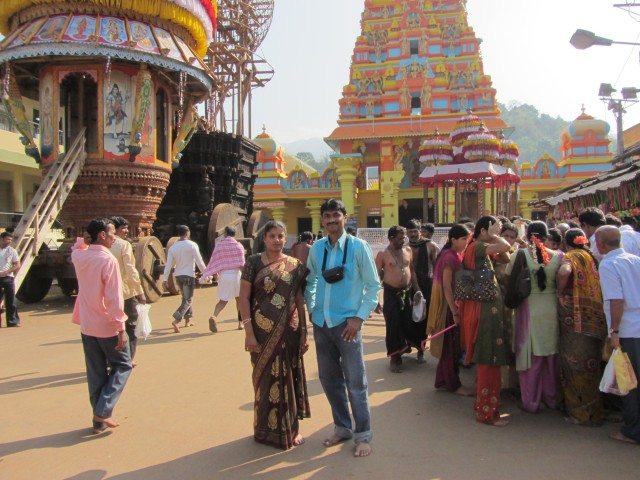 We left Subramanya temple at 10 am and proceeded towards Dharmasthala, 54 kms away. The roads on this stretch were very poor, even by Karnataka standards. Coming from Tamilnadu where the road networks are one of the best in the country, this stretch was very tough to bear. Little did we know then that much worse was to follow. We reached Dharmasthala Manjunatha temple at 11.15 am.  Dharmasthala temple is far and away the most popular and crowded pilgrimage centre in Karnataka, averaging over 10,000 visitors per day. Dharmasthala temple houses the shrines of  Lord Manjunatheswara,Shri  Ammanavaru, Lord Annappa, inside it premises. The temple is run by a Jain administration with poojas being performed by Hindu priests.

Having a look at the crowds milling around in the front of the temple, I went to the paid darshan counter in hope of having a quick darshan and was stunned by the rates of Rs.250 per head. The last time I had come to Dharmasthala in 2005 it was 50 bucks. Rumour was that the rates had been drastically increased just to fleece the devotees in the peak Sabarimala season.Reluctantly, we joined the free darshan queue and had darshan after a 2 hour wait which was pretty reasonable considering the thousands lining up for darshan. To the credit of the temple authorities, the facilities for people in the free darshan queue was top-notch with free drinking water and seating arrangements adequately provided. Fruit salads, buttermilk, biscuits and other snacks were also made available to devotees at nominal rates. As an unexpected bonus the temple did not close for the mid-day break(which is a practice in almost all the temples of Karnataka)and all these enabled our relatively hassle free darshan, saving me from my home minister’s wrath. Unfortunately, because of the long queues at the dining hall, we couldn’t have a taste of the Annadana(free food)provided by the temple to thousands of pilgrims every day. 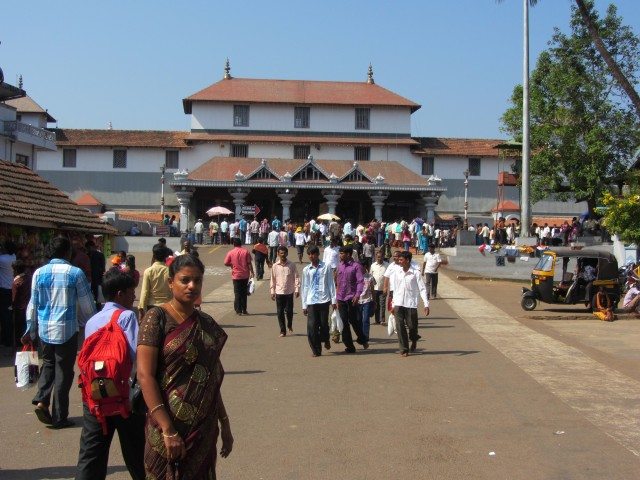 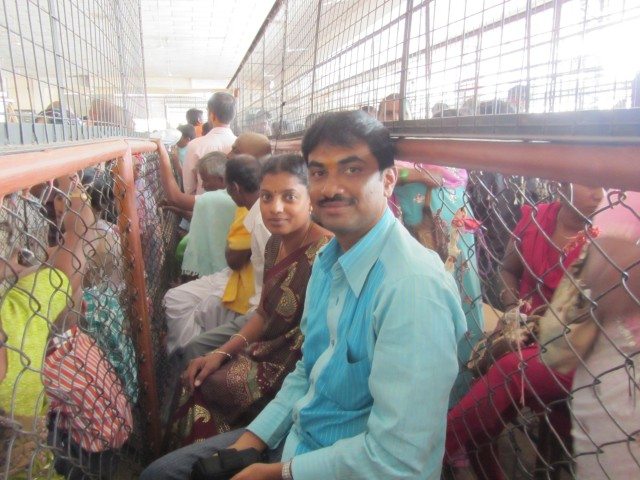 Along with thousands, awaiting our meeting with Lord Manjunatha

On our way out from Dharmasthala, we spotted this huge, beautiful Sree Rama Kshetra temple but skipped the place as  we had to reach Chikmagalur before it got too dark. 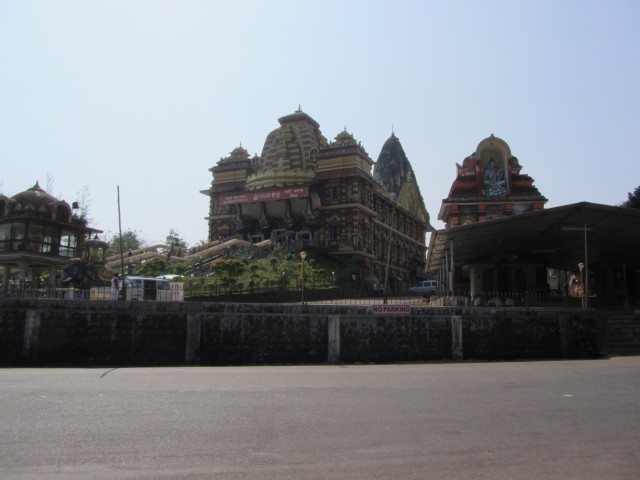 We had a sort of mini-lunch of rice, rasam, majjige(buttermilk) and paruppu vada at Ujire, a town 10 kms from Dharmasthala. Chikmaglur, our destination for the night was still 85 kms away, and the majestic Charmadi Ghats had to be crossed before we got there. As feared, the ghat roads were a wretched mess and we could literally feel the hurt and pain reach our bodies inside the cab. Huge pot holes, some the size of craters accompanied us throughout the ride. I was already discussing alternate routes for the return journey with our driver, 10 minutes into the hill climb. The one silver lining of the hill ride was the magnificent scenery particularly around Kottigehara town. We got out of our vehicle frequently to relieve our hurting bodies and to store the beautiful vistas in our cameras. 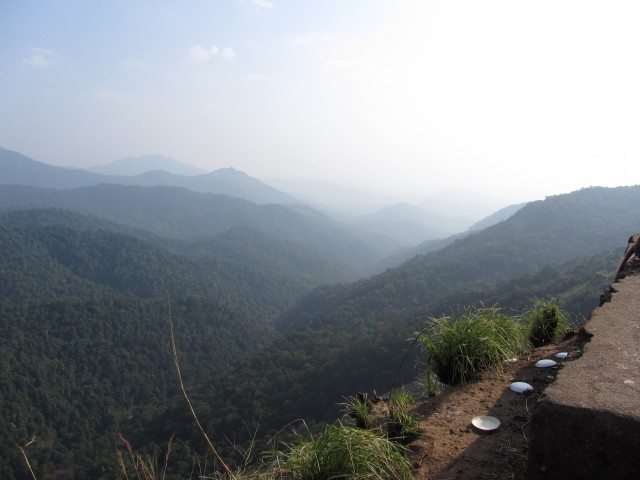 Amidst the dense forests of Charmadi ghats 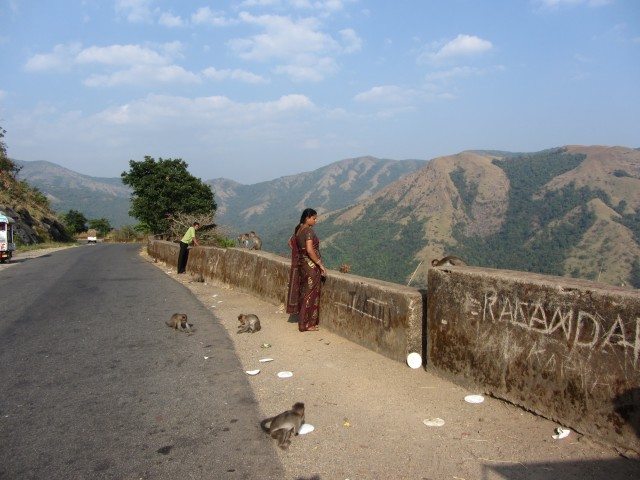 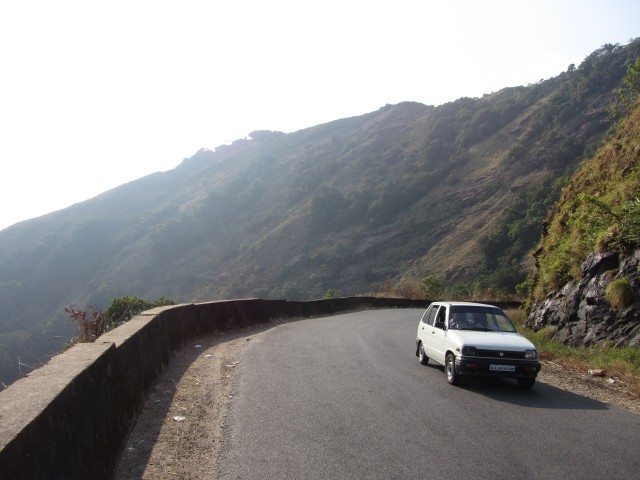 Mudigere town, 30 kms from Chikmagalur presented an opportunity to savour the local snacks and tea. As the evening got darker and the weather got nippier we reached Chikmagalur town at 7pm and checked into Hotel Rajmahal to rest our weary bodies.

Mullayanagari Peak, Belur and Halebeedu in next part.

As you all know, San Francisco Bay Area is pretty much the Desi Capital of the West. With the technology industry relying increasingly on…