This is my yet another post on Sikkim, about second day of trekking in Yuksom which was our fifth day in Sikkim.

There is only one thing to be done in Yuksom – Trekking. Between Yuksom and Dzongri, there is a well-beaten trek, which passes in the shadow of Kanchendjonga range through dense forest. Dzongri itself is a junction of several trails. Yuksom serves as a base for all these treks. Guides, porters, pack yaks, tents, sleeping bags and other trekking equipments are readily available. However, we saw a group of six boys trying hard to get all these on rent (They had no arrangements with hotels) from market, which on that day were all booked.

We decided to trek for the first half (or less) stretch of day one of Yuksom-Dzongri trail. Day one of this trail covers a climb of 16 Km from Yuksom (1780 Mts) to Tsokha (3480 Mts). One can also stay at Bakhim that is some 2 Kms before Tsokha, at a height of 2684 Mts. It takes four days to reach Dzongri from Yuksom.

We decided to climb upon this path up to 12:30 pm and then return as we had to reach Bliss resort in Biksthang (last destination of our itinerary) by that evening. We started early morning and just at a distance of 10 Minutes walk we saw how disastrous and horrible a landslide could be. In 2004 there was a huge landslide right there. 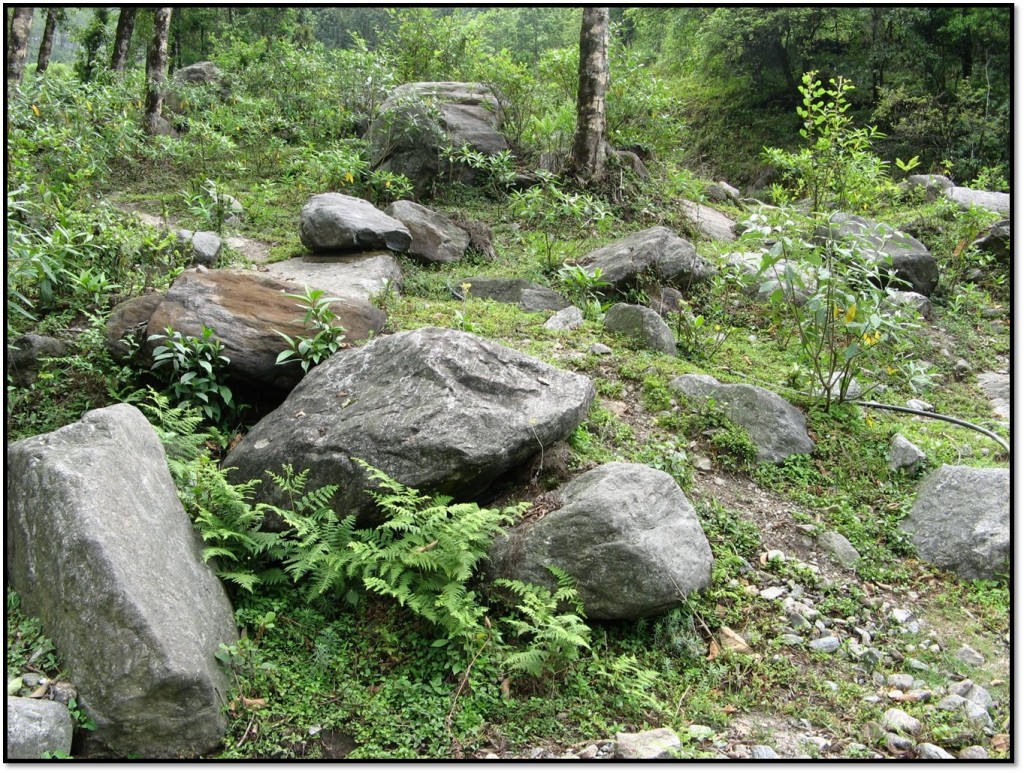 Huge boulders were scattered everywhere, blocking the route of a previously existing stream. Suman told us that on that day he was at hotel Tashigang and suddenly they heard loud sound of explosion. Initially they could not comprehend what was happening – A war with China or what. But in no time they realized what it was. They were all trembling with fear and could not dare to come out as rocks were flying towards the hotel. Luckily they were spared by less than ½ Km of distance between death and them. Not many people were there on that day and casualties were restricted to four persons – an angry face of otherwise loving and beautiful Mother Nature.

The climb started meandering past these village houses. 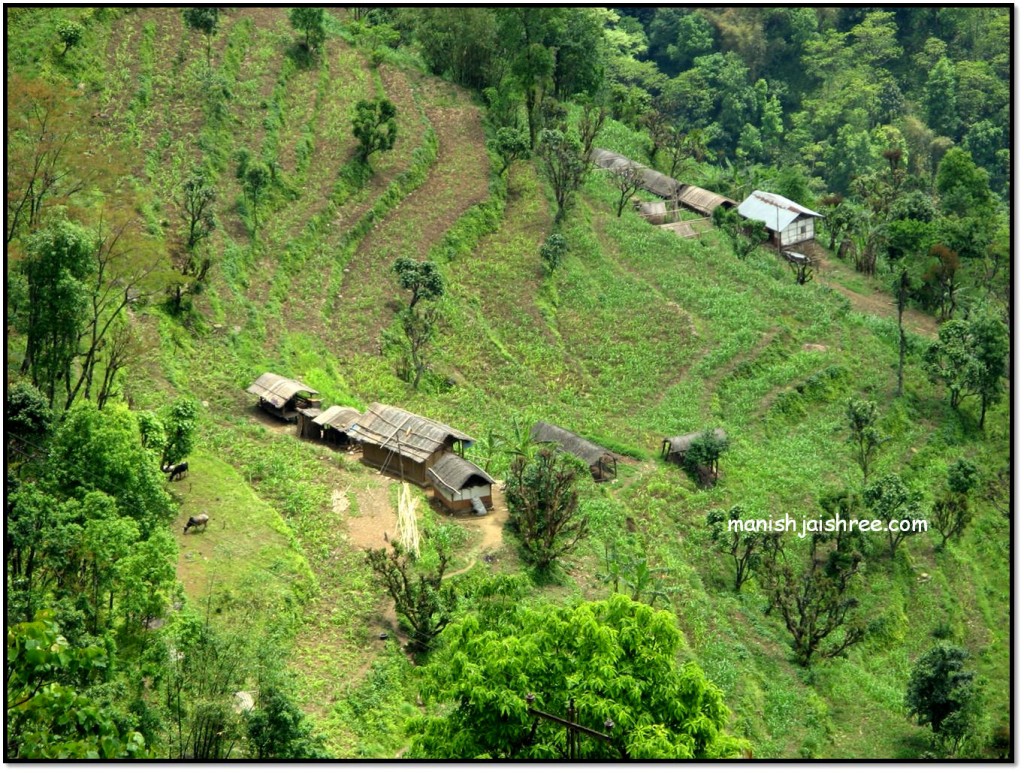 People were busy in their chores. 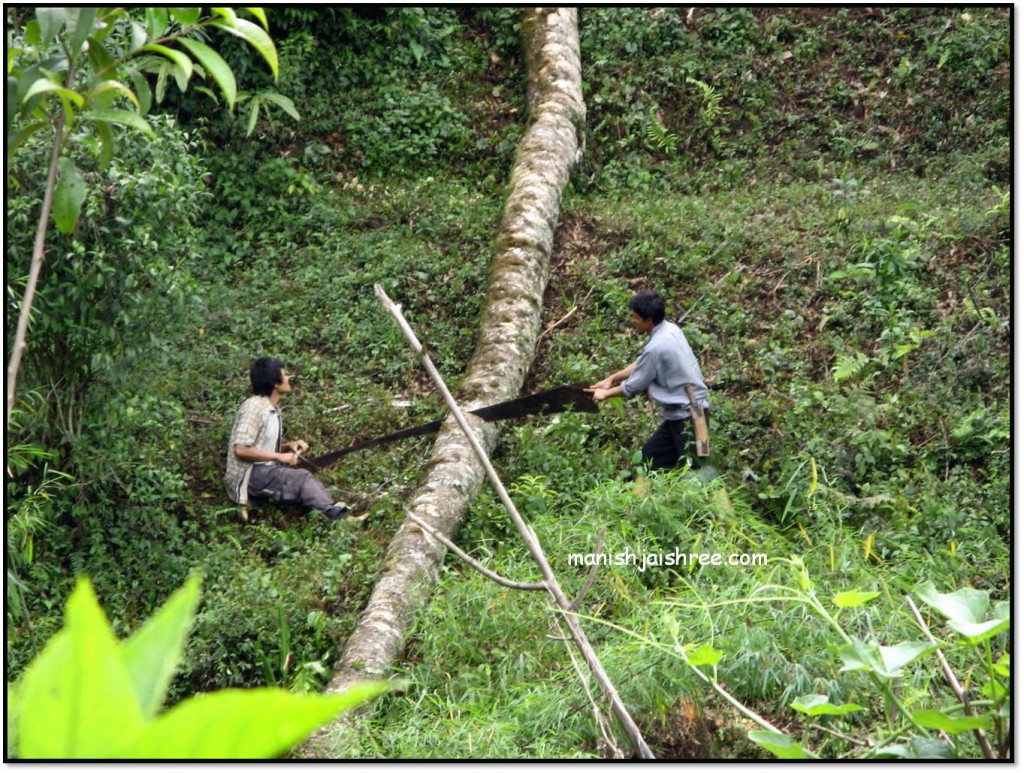 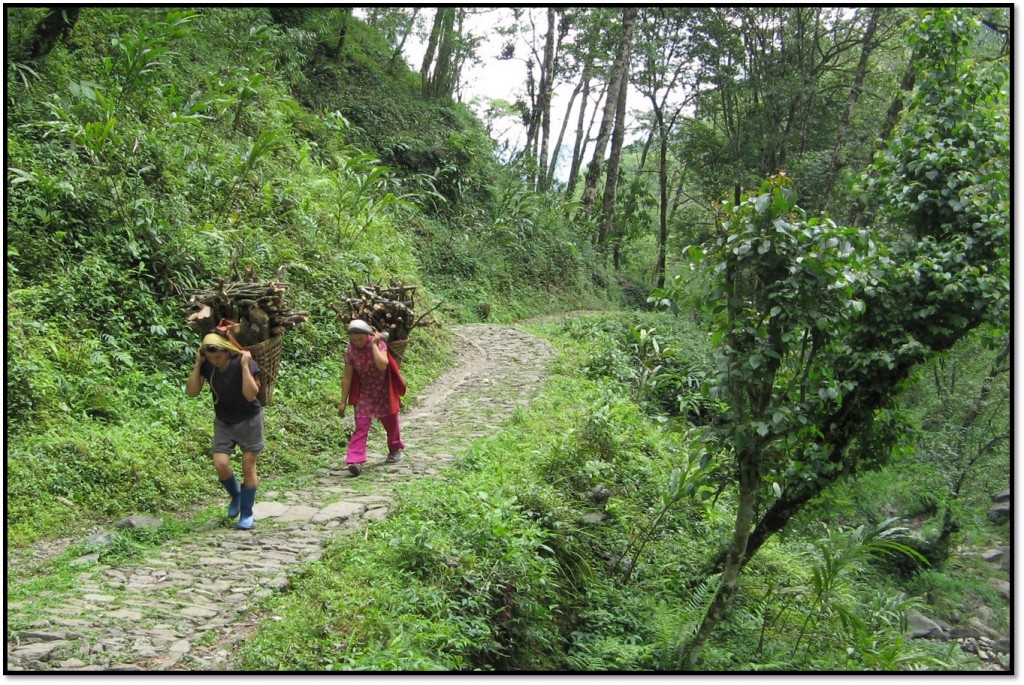 When they relaxed for a while Rachit wanted to give it a try. 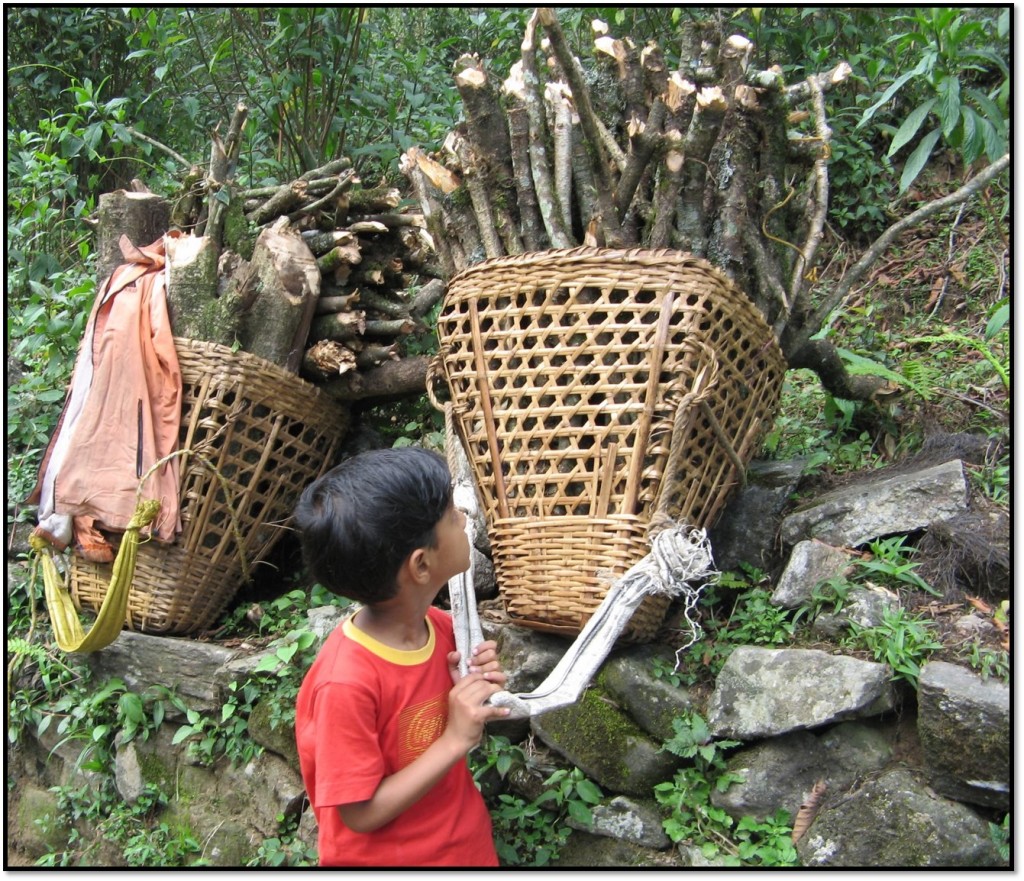 There was a group of people, who were packing vegetables, milk, gas and other paraphernalia, to be laden on Dzo. Dzo is a cross between cow and yak. Trekkers and guide had started early morning; Dzos, porters, and cook etc were starting late. But they will reach Tsokha before them to keep lunch and tents ready! Suman told us sometimes they come back from Tsokha same day to start early next day carrying other trekking party’s things, leave them at Tsokha, pick-up previous party’s thing to be carried to next destination. Once he did this Yuksom-Dzongri trail and returned in just two days!!

For the first hour walk is moderately difficult up to first bridge. We plucked wild yellow berries and ate handful of them. Here and there, we had to give sides to Dzos, 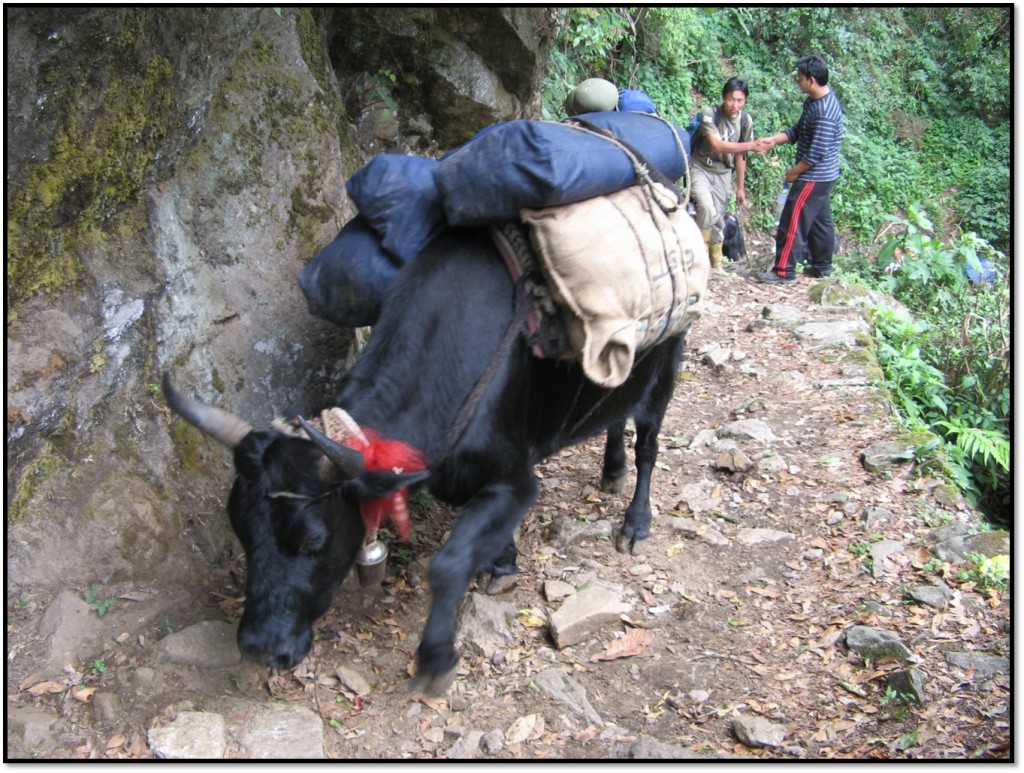 which were traveling to and fro carrying the trekking materials.

Basic amenities for trekkers are there enroute – rest shades, toilets (although not clean), etc.

We were climbing up and deep down, there was a river flowing. 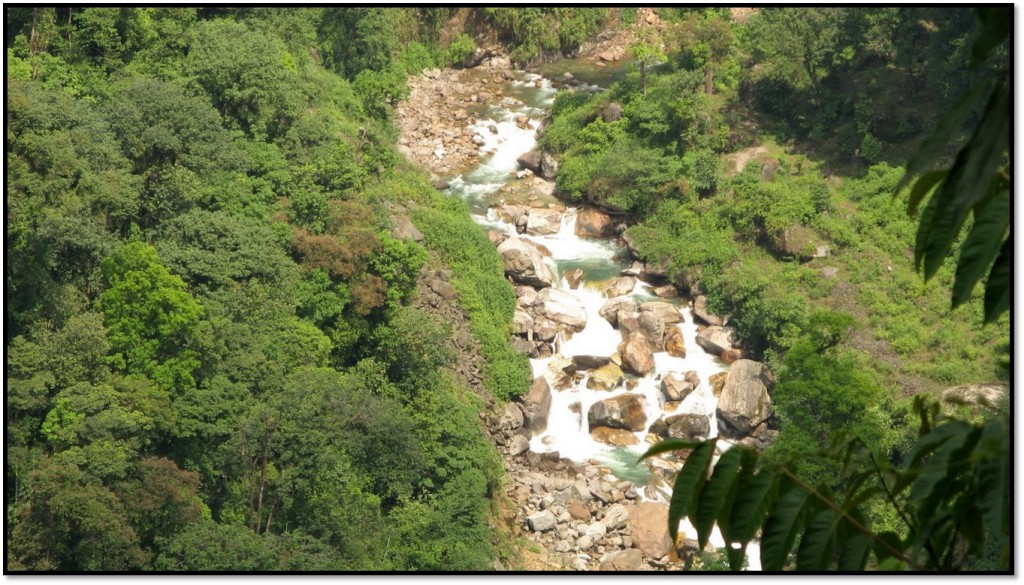 Its water was gleaming white and green. We reached at the first bridge, 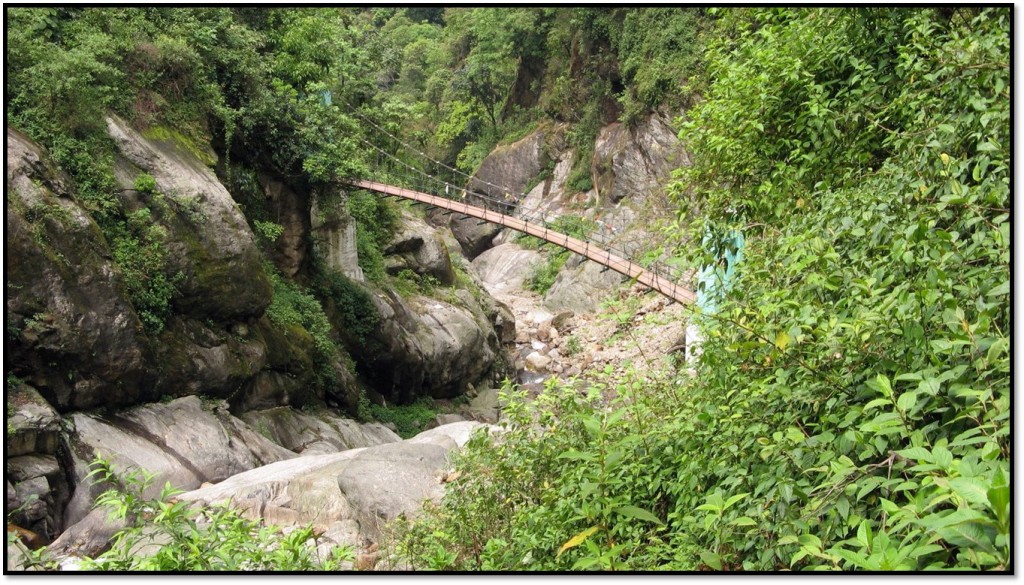 which was above that river. It was coming from yet another roaring waterfall. I have lost count how many waterfalls and streams we had come across in Yuksom. We all wanted to get down to river. Well we would, while returning back. We were climbing further up on a path lined with sky embracing trees, 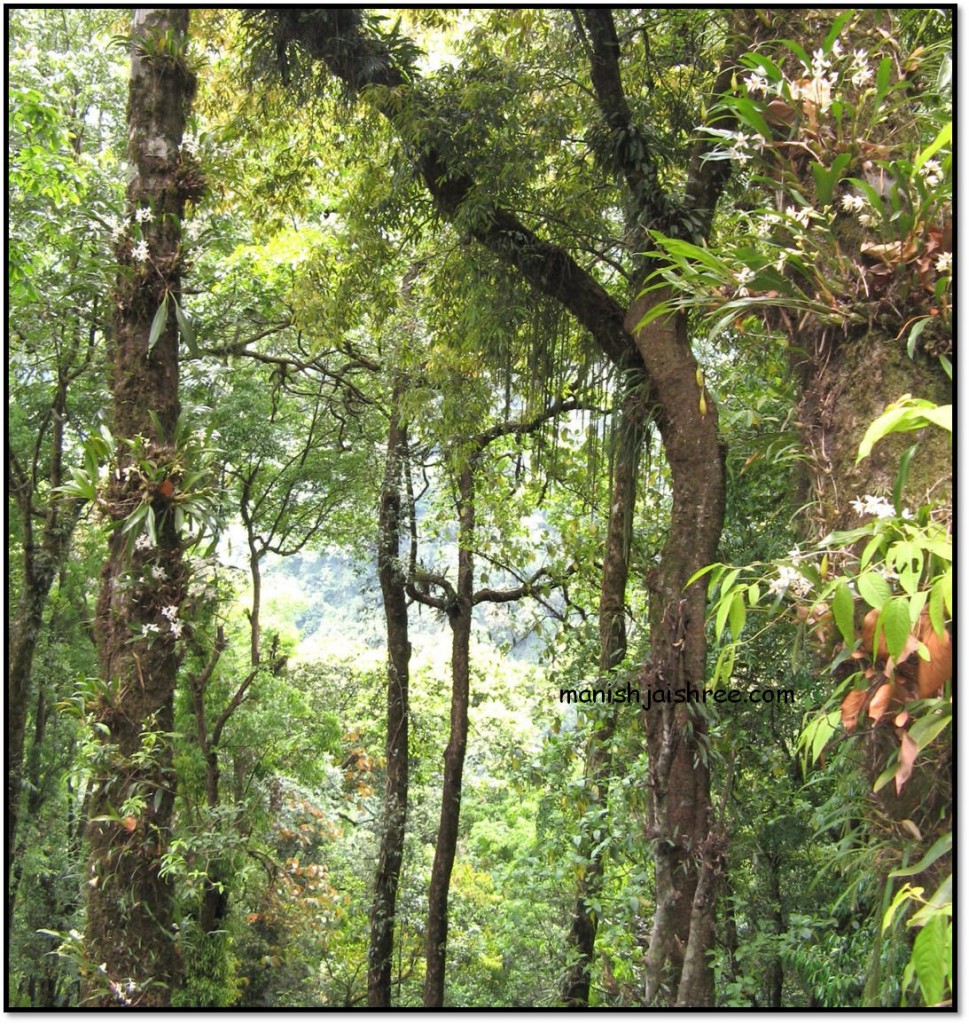 which were laden here and there with white and pink orchids. This stretch was more difficult. We had climbed high and the charm of playing in that river under the bridge was luring us. Rachit and Manish wanted to return and I wanted to go further up. Suman told us that second bridge was not far away. It was already 12:30 pm, so we returned to first bridge. We sat just in the middle of the stream and very near to the waterfall. 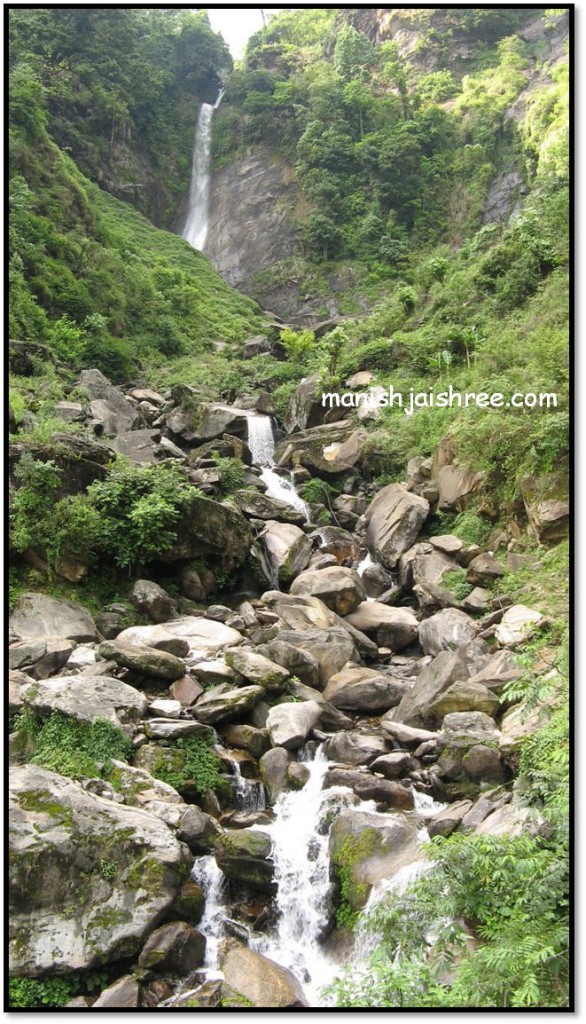 There was magic in the air and we were enjoying the surrounding mighty mountains, gargling of the stream and chirping of birds in perfect solitude. Here at this place, there was nothing one could ask GOD to grant. We were in perfect harmony with nature and ourselves. Now I know exactly why all “Rishi-Munis” and gurus chose their abode in Himalayas and places like this. It was so peaceful and blissful.

After spending an hour there we climbed down to Yuksom. It started drizzling as we were approaching Yuksom. Rachit chose not to take shelter in umbrella and drenched himself; enjoyment for him and worries for me!

We had to start for Bliss resort Biksthang around 3:00 pm and my heart was sinking at the thought of leaving Yuksom. I asked Manish – “Why not stay here and enjoy some more treks?” I am always like that – clinging to a place I like very much, but thank god! You had sent Manish as my life partner. As always he said No, taking care of not breaking my heart and yet at the same time convincing me. I was feeling sad while leaving Yuksom but there was a kindling of another new place also. Don’t know which one was dominate, perhaps the first one. We said Good bye and thanks to everyone for making our stay so pleasant and started to our next destination – Bliss Resort, Biksthang.

Biksthang is a very small town near Pelling. We were to follow another route this time – via Tashiding and Reshi. This road was very good. Enroute we stopped at Phamrong falls. This was another big roaring cascade. There was no one except us. Very few people visit West Sikkim and those who visit, only a few of them go to places other than Pelling.

Tashiding has another gompa – Suman had told us that it is a beautiful gompa where devotees from all over Sikkim gather for the Nyingmapa Bhumchu festival. There is an ancient bowl that according to a legend never dries up. Devotees are blessed with holy water from this bowl. We decided to give it a miss, we were tired and I simply dislike “been-there-done-that” kind of traveling. Sometimes Manish does insist that we have come so far and will never be coming here again, but at those moments I use my “Veto Power” – I like to travel at leisurely pace – at least in India.

Driver stopped to fill petrol but there was no Petrol pump in sight. There was none. Some local person stored it in small quantity for his regular customers. Till then we kept ourselves busy looking at apple cheeky kids sitting along side the road outside their houses. People there are innocent, happy and always smiling. In-fact their simplicity and happiness is infectious.

Soon he came and we were driving past – ummm. I don’t know what? I fell asleep. It was almost 2 hrs drive and by the time I woke-up we were approaching Rangit Dam. From there we were continuously descending along Rangit, crossing many bridges and streams, till Reshi. It was very scenic (where was it not?). I suggested Manish that we have four full days at Biksthang, one day we will come down to Reshi and trek along river as long as we can. Manish floated another idea of rafting – it was sure a good place to go rafting with the kid and his not so brave hearted mother as the rapids were quite gentle.

From Reshi, we started our climb to Bliss resort, Biksthang/Mangalbarey. Wherever there were two choices to go, Bliss people had put its board guiding to its resort. We were climbing up and up – It was so serene and very very different from our past two destinations – Pelling was all about Kanchendzonga range and its monasteries, and now this drive was all so somber and serene with more of terraced hills, maize farms and spread out rolling hills. One thing was common – you will enjoy all that most of the time in perfect solitude.

We reached at Bliss resort somewhere around 5:00 pm and were welcomed by their staff – Dorji, Ram and Gyurmee – the owner – a young, handsome and knowledgeable guy. We had a brief talk with Gyurmee about our experiences in Sikkim so far, our stay and treks – and I saw everybody’s eyebrow raised in question – with this kid! Suddenly Manish and me were not tired anymore. No matter how much you try to play it down, still your child’s accomplishments stirs something in your heart. When I say everybody it means Dorji, Ram, Gyurmee, 5 adults of a maharashtrian family and a retired Bengali couple.

So this is all about fifth day of my Sikkim trip. Will write about my experiences at Bliss in next post.

Summer in Sikkim- Part V – Yuksom and away was last modified: May 21st, 2019 by Jaishree Khamesra

After our visit to Murdeshwar, we had a good night’s sleep and woke up early the next day. We vacated our hotel at 6…