Last weekend we planned to visit the nearby areas of Mehrauli – Gurgaon road. So we covered Qutub Minar , Ahinsa Sthal & Chattarpur Mandir on the same day. These spots can be visited within a day as they lie on the same path. Visiting these spots is a good time spend for whole of the day.

We started our visit with Qutub Complex .Being a holiday the place was full of visitors One can see the following places in the Qutub Complex:- 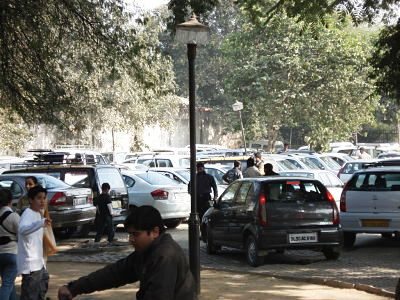 I had been to Qutab Minar long back, may be 25 years ago. And for the last 14 years I have been watching it from far while going home from my office while taking a left turn from Lado Sarai T- point 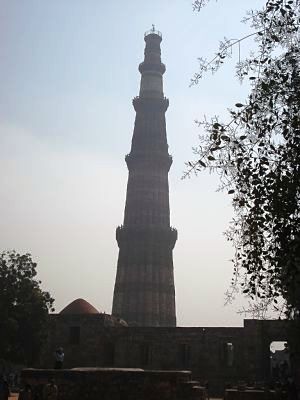 The construction of Qutab Minar also marked the end of Hindu Kingdom in India & the beginning of Muslim rule in India which ended with the arrival of the British.

According to the Archaeological Survey of India, the place where Qutub Minar stands today was once occupied by about 27 Jain and Hindu temples. These were demolished and the stones reused to build the present complex.The temples columns were used to build the Mosque Quwwat ul Islam (translated as the Might of Islam) by Qutb ud din. 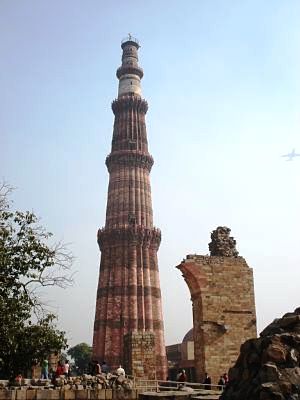 The first floor was made by Qutub-ud-din-Aibak in 1192n AD, later his son – in law & successor Iltutmish added second , third & fourth floor , which was later forwarded by his successor Firoz Shah Tughlaq who constructed fifth & the last floor in 1368 AD. 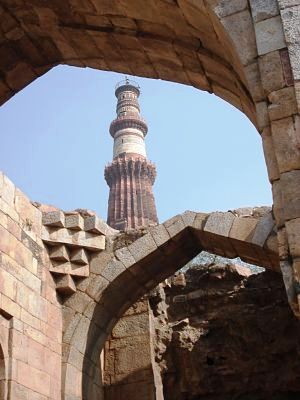 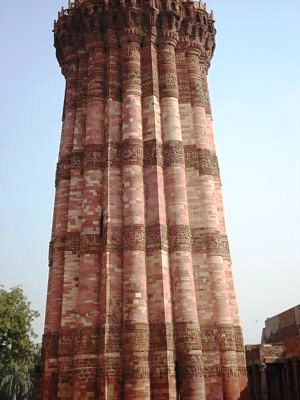 After an accident involving school children, entry to the Qutub Minar is closed to public since 1981.

The Iron Pillar is 7.21 m high & the weight of the pillar is 646 kg, was originally belonged to Chandragupta II (375 -414 AD) and was brought here by Muslims. The iron is extremely old has not rusted.

According to the traditional belief any one who can hold the pillar with his arms with the back towards the pillar considered lucky. Now for the couple of the years touching the pillar is not possible as it is fenced with metal grill.

The Alai Darwaza is the main gateway from southern side of the Quwwat-ul-Islam Mosque. It was built by the first Khilji Sultan of Delhi, Ala –Ud-Din Khiliji in 1311 AD. This is the first building in India to employ Islamic architecture principles in its construction and ornamentation. 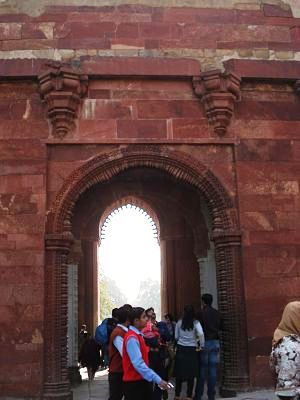 It was built by Qutub –Ud-Din Aybak, founder of Mamluk or Slave dynasty. It was the first mosque built-in Delhi after the Islamic conquest of India. Th QM was built simultaneously with the Mosque for the muezzin to perform adhan (call for prayer). 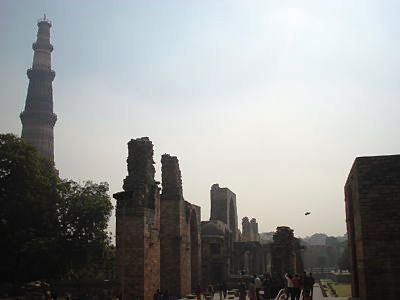 The Mosque was built by the parts taken by destruction of twenty-seven Jain temples built previously during Tomers & Prithvi raj Chauhan.

The Mosque is in ruins today but indigenous corbelled arches, floral motifs & geometric pattern can be seen among the Islamic architectural structure.

The tomb of the slave dynasty ruler Iltutmish, the second sultan of Delhi is also part of Qutub Complex.

Tomb of Iltutmish - carving inside wall 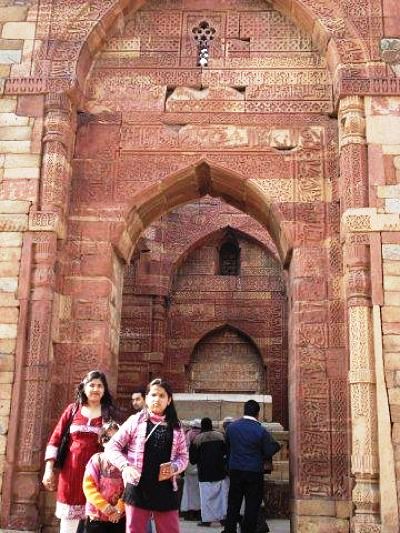 Tomb of Iltutmish - carving outside

The main cenotaph, in white marble is place on a raised platform in centre of chamber. The façade is known for its ornate carving, both at the entrance & interior walls. 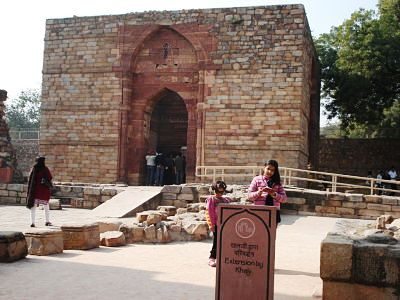 At the back of the Qutub Complex, southwest of the mosque, stands an L-shaped construction , consisting of Alauddin Khilji’s Tomb and a Madarsa. 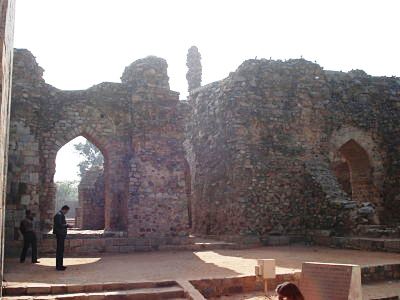 The first story of the Alai Minar , a giant rubble masonry core , still stands today, which was evidently intended to be covered with dressed stone later on. 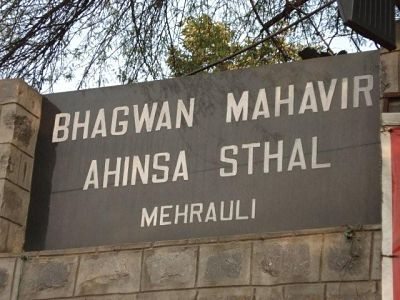 Ahinsa Sthal is located on the main Mehrauli Road at the peak of a small hill. It is situated at the intersection of Mehrauli Badarpur Road and Aurobindo Marg. This place of non-violence or peace as the name suggests is so named because a 14 feet large statue of Lord Mahavira stands here and it is now considered a sacred place by followers of Jainism. The statue was set up here in the mid 1980s and the area around the sculpture has been developed into a lush green park, over time. 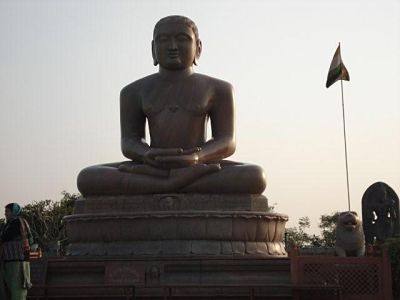 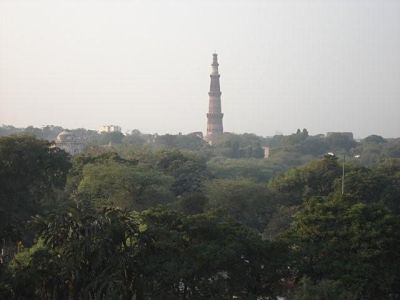 Details of the Chhattarpur Mandir will be in next Post.

We drove past Vidyasagar Setu aka Second Hooghly Bridge that connects the City of Joy with Howrah and stands at the banks of the River Hooghly. One can get a magnificent view of the entire city from this bridge. Well it is a toll bridge with superfine smooth finish. Then took the Kona Express way and sped all through the National Highway crossing Kolaghat Thermal Power Station and then Nandakumar More. From here we encountered small towns and villages on a single lane carriage path that snakes its way through them.