Hello Ghumakkar friends..This is my first boarding (post) on Ghumakkar express. By profession I am a stock Broker&Technical analyst for share trading. Apart from this I am passionate lover of HIMALAYA and Uttrakhand. I never left any opportunity where ever I get it to go towards mountain. The biggest advantage of being a Dehlite is that you are in close neighborhood of majestic Himalayas and could reach there in very short time.

Nainital, Tehri, Chamba, Dhanaulti, Mussoorie, Mukteshwar, Kausani,Ranikhet, and so on..one day during trading hours in market I felt that I should get rid of this hectic life schedule for some days. For this time I decided to go by my bike in mountain..but in mountain where…? crowded hill station like Mussoorie….not at all,than where…? after lots of brain storming I decided to go to Deoriatal in Kedarnath zone. Deorital is an untouched beauty, a heaven from where we can see majestic Himalayas peaks like Chaukhmba, a place where we can spend whole night in tent which is totally adventurous. I decided to go on 15th November, 2012. 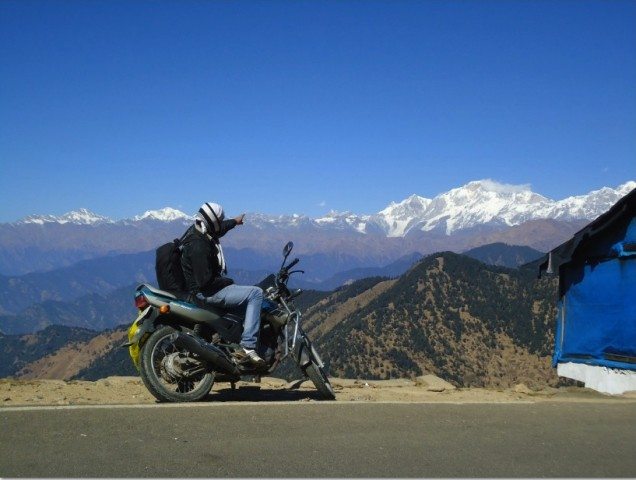 For this i did not prepare for any thing except packing some woolen cloth. Till now there was lot of  excitement generated, the reason was long bike riding and then forget every tension for some days in the lap of nature. I started my journey at 6 AM from Preet vihar, East Delhi by my bike. After crossing Modinagar it was dense fog , Suddenly i reminded my self that stop worrying about the potholes in the road and celebrate the journey. My first  break was at mujaaffar nagar at suryavansi vashnav dhaba. 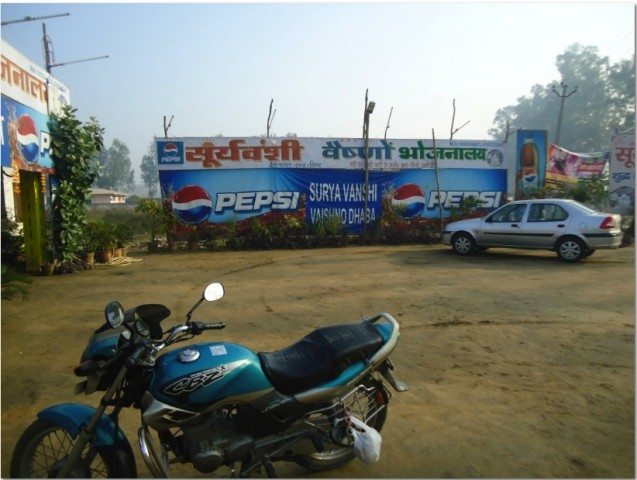 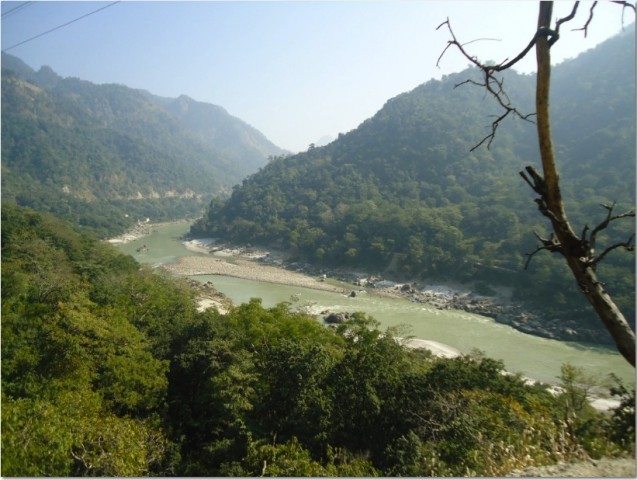 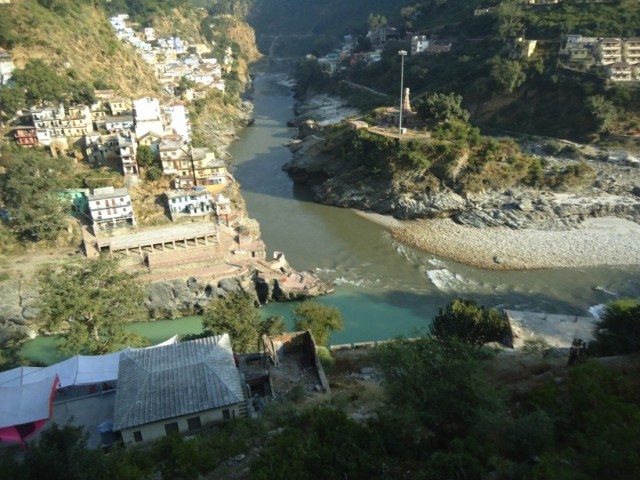 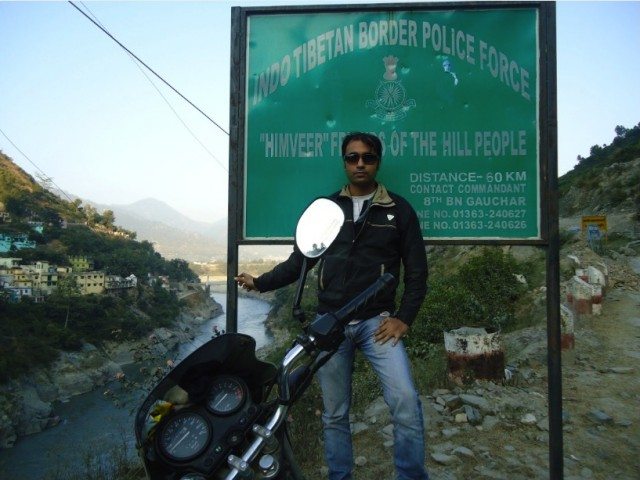 I took a lunch near Devprayag .lunch was simple but delicious  rice,dal, roti,one mountain sabji. 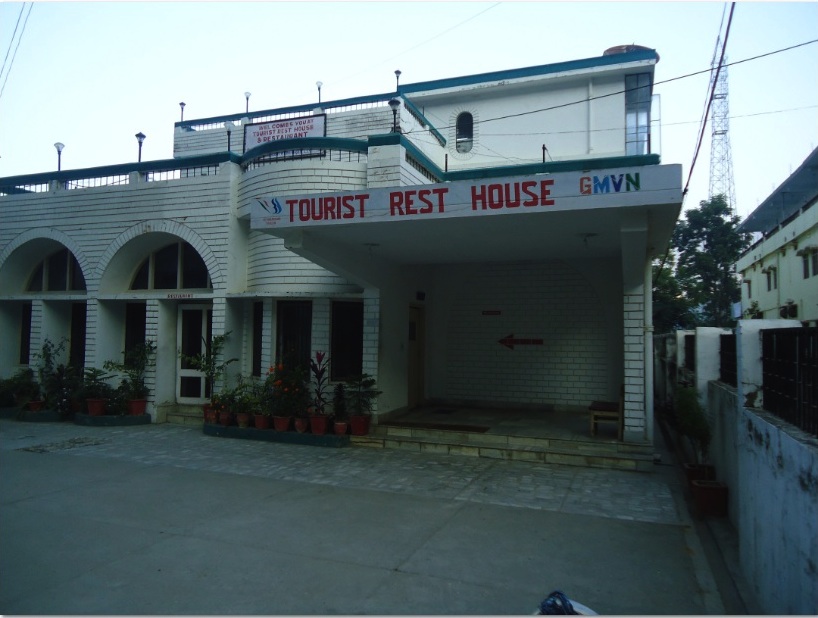 till now i was thinking to reach Ukhimath by 6 PM but due to a major land slide just before srinagar 1 hours spoiled.i reached Srinagar at 4 PM, as srinagar is not on the high altitude zone so whether  was ok.i took another break in one small dhaba for tea.since i was on bike,dhaba owner suggested me to halt in srikot and complete the rest journey next days.idea was good.i reached srikot took a room for 400 Rs in GMVN rest house.

evening was quite a cool in Srikot.after having dinner i went to bed due to some tiredness after long bike riding .but still lots of excitement was there for next day bike riding in himalaya zone..next day early morning i get up and ready for further journey.till deorital  i had to cross rudrprayag,agustya muni,syalsaur,than ukhimath..any way in morning it was chill whether,shivering cold .but there was an excitement which is acting like heater for me.soon i reached rudrprayag then crossed agustyamuni,after just crossing agustymuni  i found the first unforgettable  glimpse of chaukhamba peak, 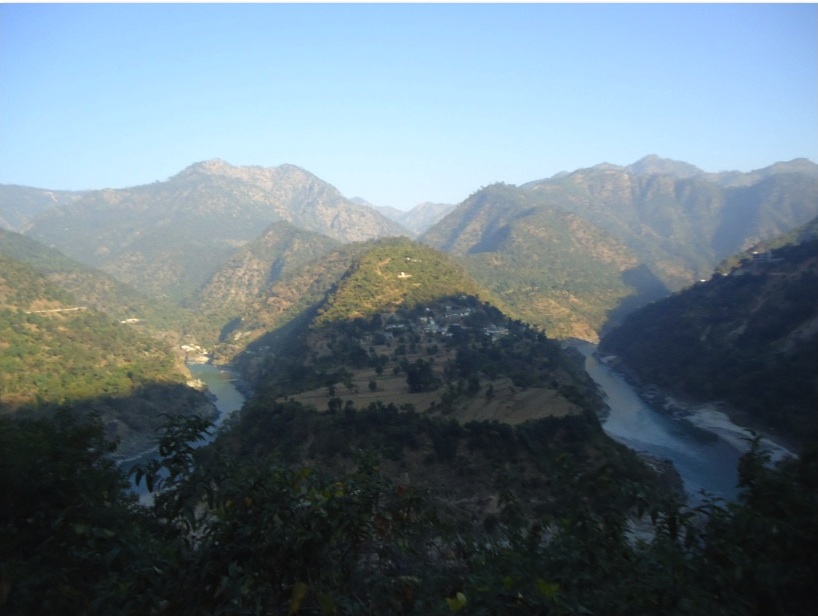 the magic of majestic Himalaya started now.soon again i reached ukhimath. recently ukhimath have faced cloud burst in september month and the impact of this was still there..some where road were totally vanished..but work was in progress,people were still in search of their family member who are buried during cloud burst which happened  in midnight . 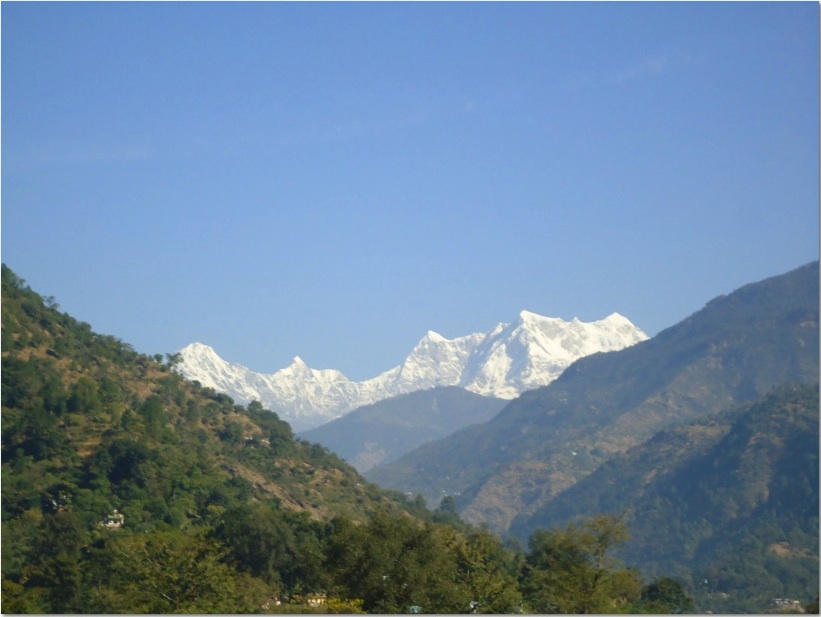 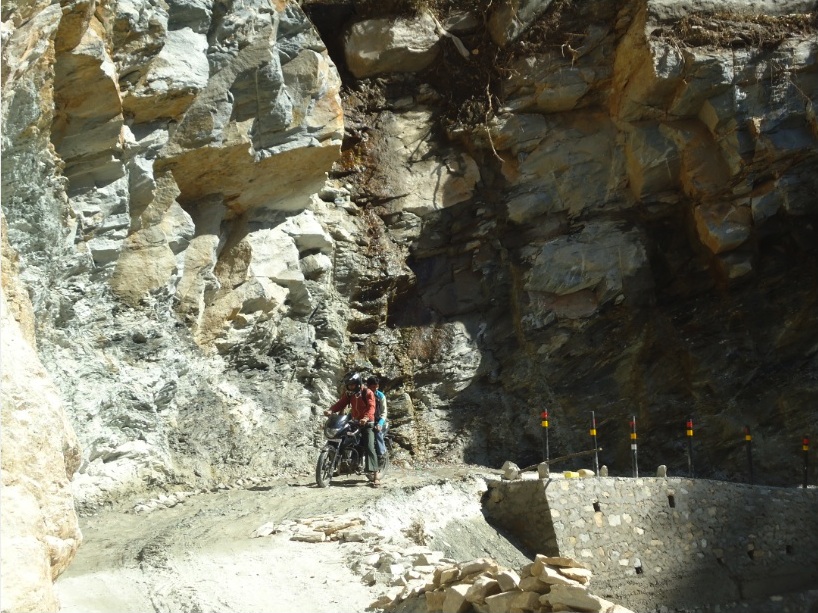 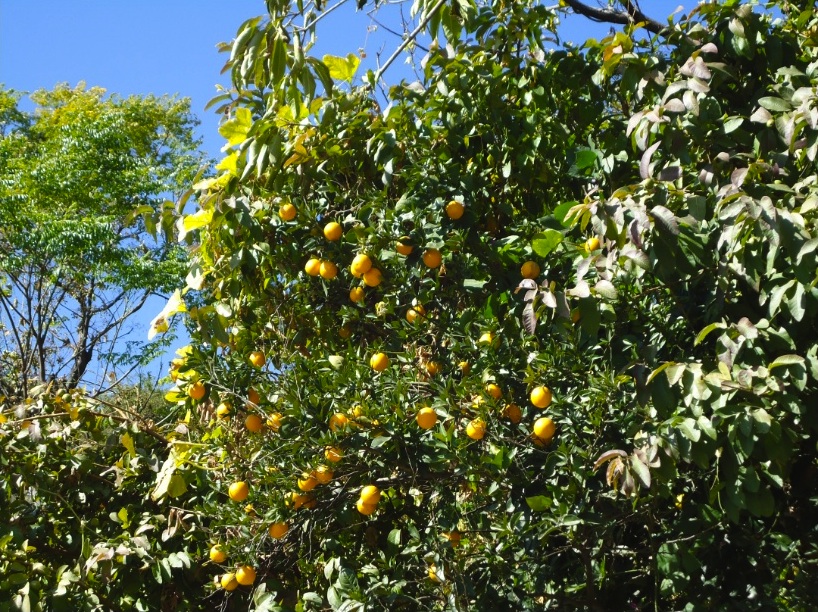 after this again i started journey soon i reached saari village which is the base camp for Deorital.here i got warm welcome from a person his name is rakesh singh negi owner of Rakesh tourist lodge saari village.even all people of saari village were very humble and nice all have praised me that i came from delhi by bike.after taking tea .rakesh singh negi called his friend(surender singh)owner of dhaba at Deorital for my tent arrangements.he showed me  the way to reach deorital which is 2.5km from saari village.i just parked my bike ..here parking is totally safe.

from here real fun and enjoyment of loneliness started.only one song i listen repeatedly  during 1 hour trekking which was SHOW ME THE MEANING OF BEING LONELY..that song seems to be totally  inextricably linked to the surrounding  environment .deoriatal is 70 degree steep climb from saari village.

After 1 hrs of hiking i finally reached the Tal. i was  stunned and speechless on reaching the top. The snow-capped mountain peaks surrounded the Tal….it was awesome, there’s no word which I can describe its beauty.here i found everything what i wanted from  nature. 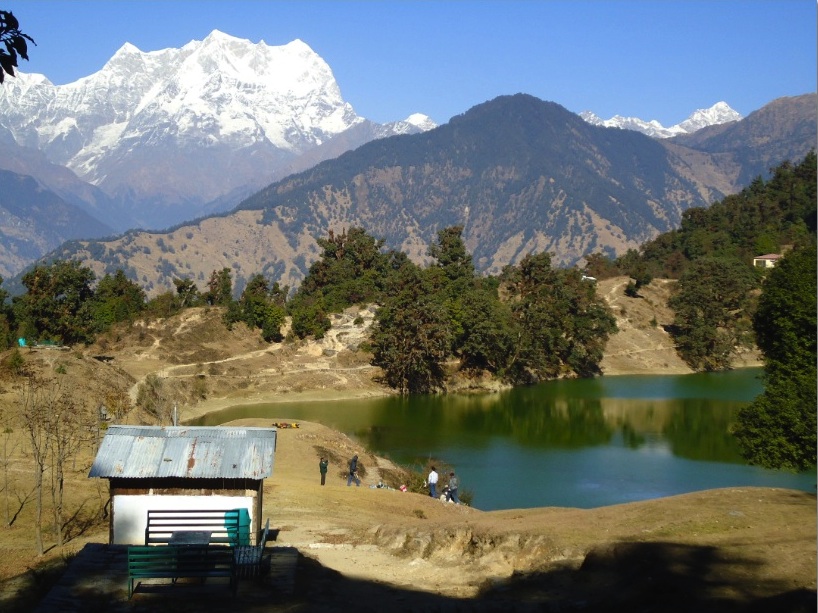 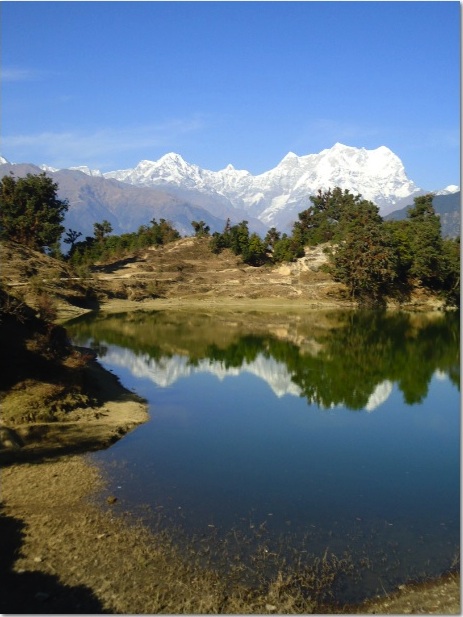 Due to winter season there were only 4 to 5 people are there,one foreigner couple and 2 bangali people , two dhaba owner, and lastly i was me. surender welcome me and served me omlate and tea which was super delicious in that’s kind of environment.since i reached tal at 3 pm,i started to walk from one point to last point of tal.really what i felt there cant be describe in word, 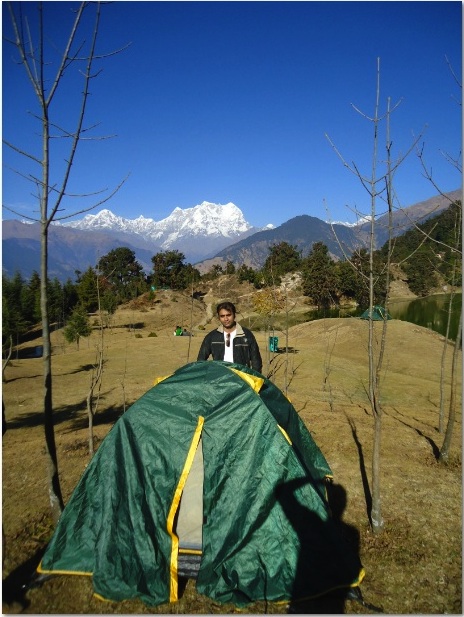 surender told me that try to come in the month of feb when you will find burance flower every where.. whole deoriatal converted in red colour  heaven in that flower.  i promised to myself to come this place in month of feb.what a peacful moment are there,there is loneliness,there is white snow beauty,there is greenery,there is wlidlife,u forget the metro life,forget the horrible traffic forget every tension for a days..YE JAAGTI KA AANKHO KA SAPNA THA.. KUCH PAL KE LIYE  HI SAHI,MAGAR YE SAPNA MERA APNA THA.since it was sunny days weather was pleasant but when sunlight off by 5 pm it started shivering .it became chilled environment there,my tent was ready.by evening two banagli people and one dhaba owner returned to saari village,now  one foreigner couple, surrender ,one forest gured santosh singh rawat.

and lastly me  were there .surender again started to make omlate for all,since i brought 3 cane of beer.one i given to foreigner couple,one given to surendar and one for me.it was nice evening when we all together seated near wood fire.. surrender told us that this is core forest area,many animal like musk, jackal,fox,leopard  lives there..we started to immerse ourselves in the chatting and hearing the  many untold stories related to the mythology of the Tal, the unknown Forest, from surendar and santosh singh rawat .now instead of surendar singh i cook egg curry for all in dinner..It was really a feeling somewhat about some experiences I have imagine since long time.We  started taking our dinner near Wood fire  there is no electricity,only solar lamp are there.After sometime i felt like going to tents for sleep. But frankly I really don’t wanted to go there,tent is few yards walking distances that too in that pitch dark night,There were too many strange sounds of the jungle.after entering in tent All along the night i heard several sounds and after entering in the tent i don’t know when i fall asleep..suddenly around 11 PM  A strange sound is coming from outside may be a few yards.. I was really afraid and didn’t know what to do.any way i suddenly courage to unzip the tent entrance.after some yards from tent i found two small torch light.may be it was jackal eye.. but when i saw with the help of torch light on the back side of tent it was group of deers i ran into the tent for camera but till then they ran away..Sometime later i fall asleep and woke up early in the morning.i discussed with surender about this incident he told me that animals like deer  jackal come to tal to drink water in night.any way in morning Sun rise from the back of the snow-caped mountain peaks and it was a breath taking sight.really i never wanted to go from this heaven..but truth is truth ..i had to come back to live machine life in metro city.

it was time to say good bye deorital.apart from tent charge and food charges,i wanted to give Rs 500  to surendar but he denied to accept,even guard santosh charge me only 50 Rs as entrance fee.they only requested to me bring a bottle of red wine when i will come back to deoriatal in feb month.i left only lovely memories&beautiful experience i had in deoriatal. thanks a lot to humble and selfless person like surender and santosh singh rawat..who treated me like a guest.i left Deoriatal and move towards chopta&tungnath…journey continued……………

i am fun loving person..always want to explore Himalayas..hills,nature..passionate about long driving..

We were involved in the daily grind of office, and were really needing a break. The initial plan was to plan a trip to…