Today was our eighth day in London, and the plan for the day was pretty non-hectic. We were to meet Honey at LHR (Heathrow Airport), she was on a connecting flight to India and had the day free. From there we were to go to eat at this restaurant called ‘The Mint Leaf’ (why don’t you take a guess at what type of cuisine it served?), and well, that was about it. A nice lunch with Honey, and the rest of the day was to be spent at home, ‘relaxing’ (at least that’s what mom had in mind). 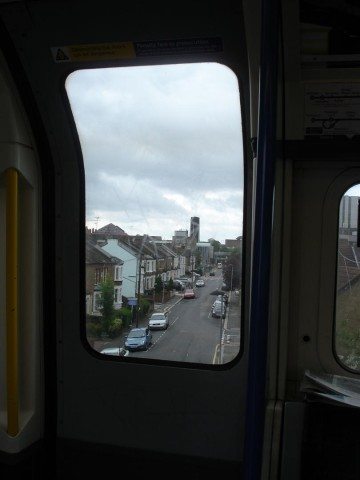 View from Tube, on our way to LHR

We got up at 7:00am (a personal best) and were ready and out by 8:00am. We got on the Tube and braced ourselves for an extra loooong journey to LHR, which was on the other side of town. We reached LHR by about 10:30am, and saw Honey waiting for us at the ground level, and without wasting much time we left for the restaurant. Well, we were inside the tube only by 11:00am, but we were still rather in time for lunch. 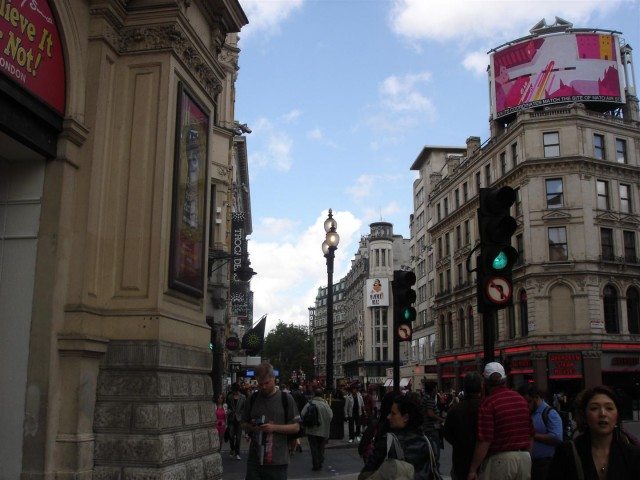 We got off at Piccadilly Circus and took a leisurely stroll down to the restaurant, which served Indian food (readers of my previous articles know my thoughts about having Indian food in London.:P). But this one, The Mint Leaf, was considered one of the best in London, so I was kinda excited.

On our way to Mint Leaf

Anyway, we reached the restaurant around 1:00pm, and were seated at our tables by about 1:15pm. It was a nice, dimly lit restaurant, done up mostly in shades of brown and black, with a bar on the side and simply extra-ordinary service. It was just amazing, and we hadn’t even ordered our food till then. We weren’t exactly too hungry, but we still ordered as if we had been left on a stranded island for a week or so. We ordered this papad type dish for starters, followed by Dal Makhni, Bhindi, Chicken Chettinad, some kind of Indian lobster preparation, Rotis and Paranthas(both, normal and Malabari). Well, since this is more a travelogue than a food blog, let me just keep it short. The food was just plain amazing. The papads were spiced just right, and were neither soggy nor hard nor raw, just the right amount of crisp. The bhindi had been wrapped in some kind of achari type of masala and was almost kinda crunchy☺. The dal too had been done quite nicely, but all my attention was directed to the chicken chettinad. Let me just say, it was the best chicken dish I had ever tasted. The curry had been spiced perfectly. The chicken was extremely tender, and the flavours of the curry had seeped in totally. In fact, I wonder how they managed to find all the spices and flavourings which would have been required for the dish, in London. The dish was quite spicy, but unlike what happens in these kinds of dishes, the spice didn’t overwhelm all the other flavours. So yeah, the food and ambience were pretty amazing, and so, as is routine for me in the company of amazing food, I overstuffed myself. We had all eaten in a similar manner, and thus decided to close the meal without dessert. 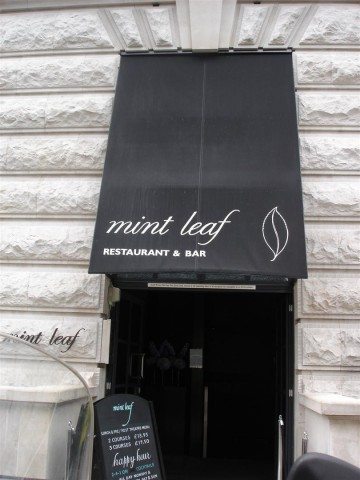 We were out of the restaurant by 3:00 pm and started speculating about what to do next. We said bye to Honey, who had to go back to LHR to catch her flight back home. We finally decided to walk down to Trafalgar Square and The National Art gallery, since going home and resting just didn’t seem exciting enough at that time. It was a short walk to Trafalgar Square, but a beautiful one nonetheless. We walked through the busy streets of Central London. 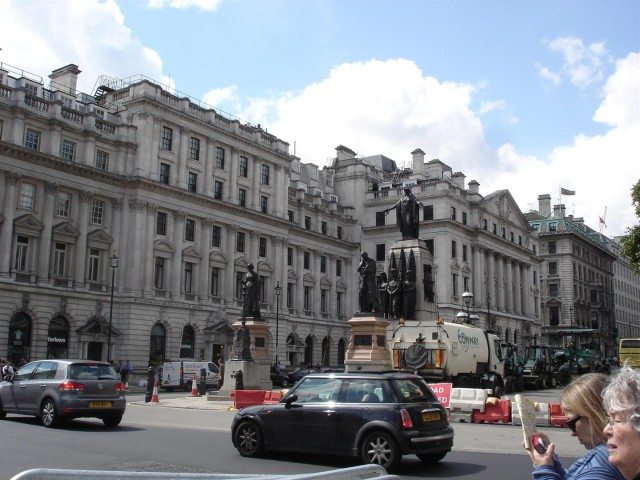 On our way to Trafalgar Square

We reached Trafalgar Square in no time, and started off the second half of our day with a street performance. It was basically this guy showing off his flexibility, but it was fun. We decided to check out The National Gallery before starting off our photo-session with the Trafalgar Square statues and sculptures. 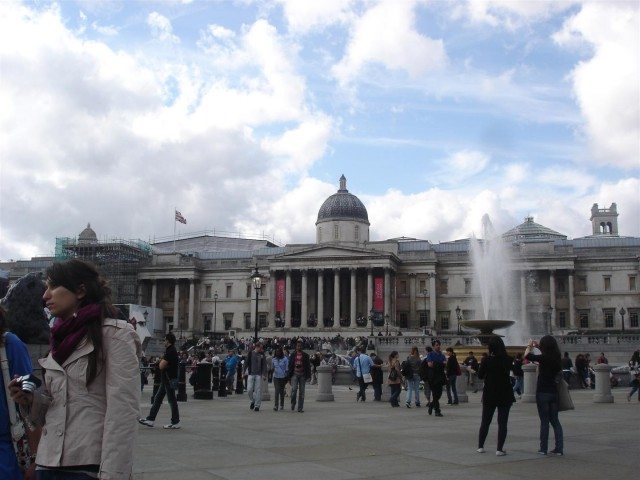 There were some really beautiful paintings there, and the more valuable ones had a little glass casing on them to protect them. We spent about an hour at the Gallery, and took quite some time in the souvenir shop trying to decide what to buy for friends and family back home. There were a lot of things to choose from – fridge magnets, mouse pads, cute little photo frames, stationary sets etc – all featuring famous paintings.

Post buying the souvenirs and all, we generally hung about Trafalgar Square for another hour or so, grabbing a bite from across the road, clicking pictures and then basically sitting on the steps.
We then took a short walk to South Bank. We didn’t exactly have anything in particular to do, and so decided to eat some waffles, ignoring the fact that we were, of course, quite full. Well, what can I say; the waffles were just as good as my tongue remembered.

We saw a booth in front of the cafe, announcing bookings for a cruise on the Thames (it was £30 for both of us). Since neither of us was too keen on getting home, we decided to do that one thing more before getting on the Tube to Hornchurch. We booked ourselves on the 5:00pm boat, and since it was already 4:50pm we decided to just wait at the pier till the boat came. The cruise was to start and finish from the same point, the London Eye Pier. 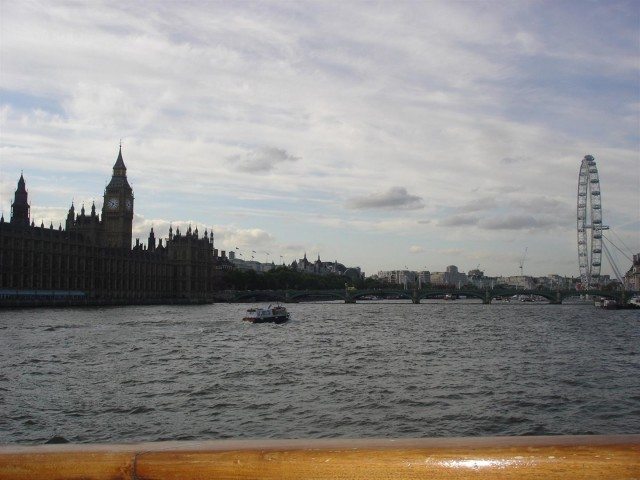 Thames River Cruise2 - The old and the new

It was a two-tiered open-top boat. We, of course, went to that top deck and took the seats in the front row. The weather was quite pleasant, sunny with just the right amount of wind, so that you weren’t too cold when the boat moved. A guide was giving us little nuggets of information on the landmarks along the Thames River. Mom and I were both busy clicking pictures on our respective devices, but did manage to intake most of the info being given by our guide. We had a closer look at Westminster Abbey and the Big Ben as we sailed past. We saw Canary Wharf, the Tower of London, the retired battle-cruiser – HMS Belfast; St Paul’s Cathedral, Shakespeare’s Globe, Tate Modern, Tower Bridge and a lot of other bridges. It was a lot of fun going under the bridges, with mom trying to take pictures of the underside of the bridges. 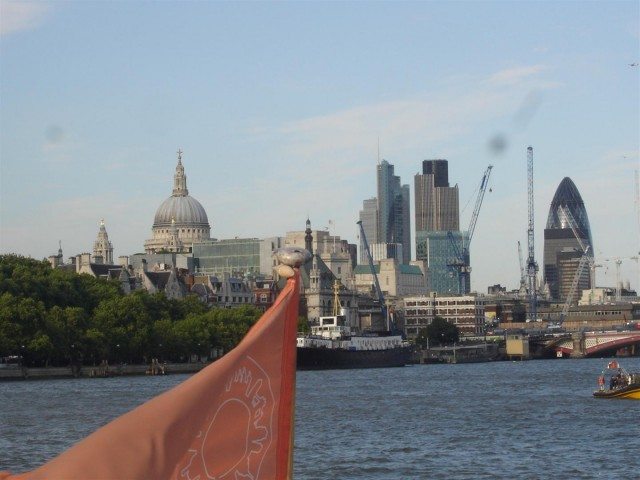 The tour was quite enjoyable, and I wouldn’t have minded for going on another spin. Unfortunately, this was the last trip of the evening. Well, we decided that we had had enough excitement for the day and thus got on the District line for a sleepy ride to Hornchurch. Once home, we, as usual, watched re-runs and chatted till not-so-late, bringing a close to Day 8 of our London trip.