Indigo flight lands at Suvarnabhumi International Airport, Bangkok at 10.45 AM, local and before time.

We deplane; go through the motions and find us lined up at immigration counters. The long queues are made up of diverse nationals with varied dresses, languages, features, histories and stories…..my daughter whispers, ‘look, so many foreigners!’ I whisper back, ‘we are also foreigners here’. The feeling is sobering as much as exciting.

The official at the immigration counter is mechanical – takes my passport, does some mysterious things with it hidden from my view. I watch his hairs with a secret disquiet (…..nothing wrong with the passport, I hope. Did the immigration guy at Delhi put the stamp correctly? Visa – was it genuine or was there any scope of mischief?….) He returns the passport with a twitch of lips which may or may not pass as a smile.

Sharmi and Debosh are in the next queue, handled by a cheerful lady. She is extremely happy for some unknown reason, laughing loudly and chatting with others officials across her booth. My guy, of course, will no way share her mood or feelings. But the noteworthy aspect is that my queue, despite (or because) of this grumpy guy intent on doing things mysteriously, seems to be moving faster than that of the cheery lady. As a result I am already standing across the blue line which perhaps officially marks my entry into this country when Sharmi has a couple of heads ahead of her. 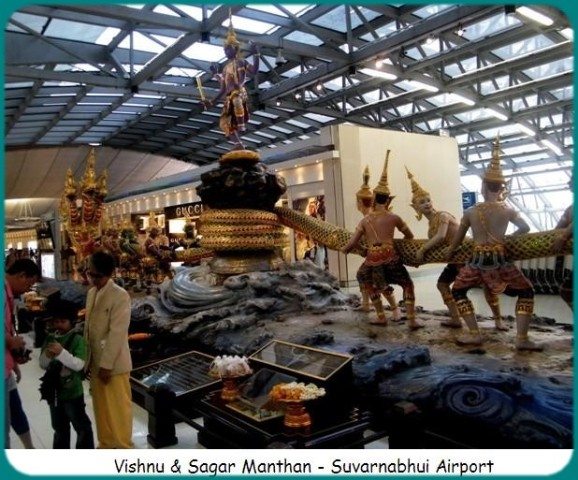 (We able to recount these out of some 17 Thailand facts Debosh was to have learnt before coming here).

We stroll around for a while before proceeding to the Avis counter. The lady at the counter tallies my details and directs us to a van, which takes us to their office located nearby. The cheerful staff in the rental office primarily needs to see the driving licence, IDP and passport, before presenting the dotted lines .

We are not very much for GPS. One important part of driving, we have come to believe, is getting lost on the way, getting out of the car and asking locals about direction….. often to get lost again. Such occasions, after all, enable us see additional, uncharted/ unintended places. It is perhaps the destiny’s way of offering ‘complimentary’ to a traveller, so why miss on it? On our first visit to Shimla, we entered the city correct way; then ‘loss-of-memory-or-sense-of-direction-or-you-are-getting-old and forgetful’ thing started. After about 3 hours, we were driving across victory tunnel to reach the bus stand, from where we had started our entry into Shimla. We have had a number of similar experiences, with no regrets.

By 2 pm, three of us are driving out of Bangkok. Destination is Bang Saen beach, some 100 kms south of Bangkok and 30 kms short of Pattaya.
Drive from Bangkok to Bang Saen is over ‘Bangkok – Chonburi Motorway (NH7)’. The motorway passes close to Suvarnabhumi airport exit and reaches Bang Saen after about an hour’s drive. Motorways are elevated toll roads, well maintained offering smooth ride. The motorways/ highways are well marked in English and Thai but the English fonts are smaller in size than Thai. Is it because the Thai authorities think highly about vision of English reading drivers? 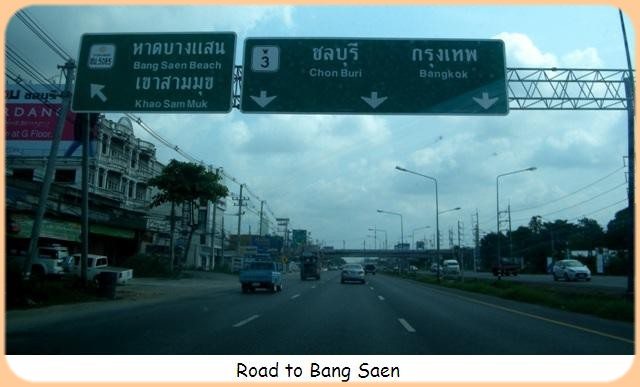 By the time I settle myself driving a foreign car hired from a foreign agency in a foreign country, I realise that both the passengers are fast asleep, oblivious to all the excitement around. This is to be expected since the Indigo flight leaves Delhi at 5.30 AM and check-in starts at 1.30 AM which means we had to forego night’s sleep.

A flight, any flight for that matter, does not make things easier for Sharmi. She has this unusual……knack of getting into a super-vigilant mode while flying. She tends to imagine unspeakable things waiting to happen to the aeroplane and she also thinks that if she remains awake, she would thwart that unspeakable thing. I have an idea about what that unspeakable thing that may happen to the plane is, but I am not allowed to utter or even think about it, lest my thoughts come true. But I suspect that Sharmi constantly thinks of that unspeakable thing for the entire duration she is seated in the plane – and it is very evident that her thoughts have never come true. Okay, she has therefore been awake for more than 30 hrs and the drive gives her an opportunity to make up for the lost sleep-hours.

I am enjoying the drive on smooth roads with mild traffic moving  at approx 90-100 kmph. The highway runs parallel to the coast, some 10 kms landwards from the coastline. I need to remain on the road to Pattaya during initial parts of the drive, which is well marked. Thereafter, I should get off this highway at an appropriate point and move westwards to reach the beach of Bang Saen.

However, I take a premature turn and soon realise that I am off track. I am approaching a city whose name, alarmingly, does not ring an alarm. I park the car in front of a ‘kirana’ type of shop where a guy is seen sitting on the outside. The middle aged person is the shop owner, who has set-up a nice small table for himself outside the shop and is enjoying a bottle of beer with some munchies. He is all smiles and bonhomie and very keen to help me out. There is a problem though. He does not know English. After a long deliberation and partially grasped exchanges, he gets the idea about my destination, walks down the shop and indicates the direction I should drive to reach Bang Saen. I wave a thankful goodbye to this friendly person. 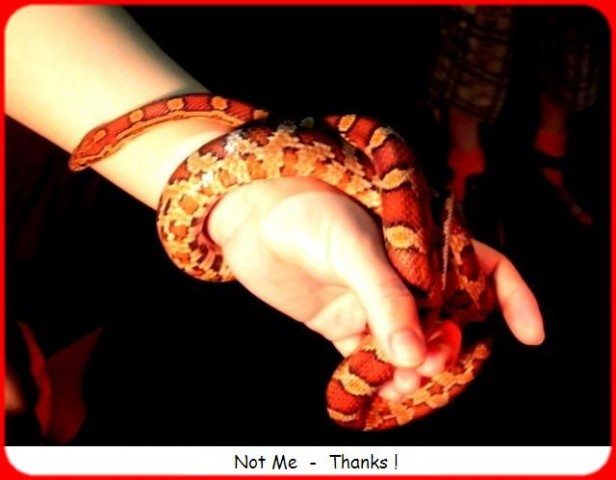 After about an hour, we are on a narrow village road across a single track railway line. On my way to this unknown place from the previous unknown place, I have tried to enquire about Bang Saen from others (at traffic lights, etc.) to no avail. Though everyone wants to respond to my queries, I don’t seem to get what they are saying. I cross the railway track and stop at a cluster of shops selling grocery, eatables, sea-food etc. One of the shopkeepers, a bright girl in her twenties excitedly watches me approach them. She seems to understand my predicament, tries very hard to explain her ideas, supported by other colleagues who have left their jobs and gathered around me. When things do not work out, this bright girl gets a bright idea. She extracts her mobile phone and calls one of the friends who she thinks knows good English, narrates my problem to her and then hands the mobile to me indicating that I should talk on the phone. There is indeed another female voice greeting me in English and all that, but thereafter the scene is back to square one. I suspect that the female on other side of the phone barely knows English but has created an exaggerated impression about her language skills among her friends. Since a large number of Thais are unused to English, knowing that language does help impress people. I can see an elevated highway across a narrow field. I want to reach the highway which hopefully would have relevant signs. I indicate to the girl that I want to reach the highway ‘over there’. This leads to another round of deliberation among the locals and an old lady describes something to the bright girl, who in turn does it to me. I am left no wiser. I do, however, smile fervently; nod my thanks trying to convey my appreciation for all their efforts and drive off.

Sometimes our best memories of a place are tethered to seemingly inconsequential sights or events, things which do not find a mention in the glossy tourism brochures or elaborate travel articles. We may not even realise it when the event occurs. Later on, while looking back we come across these bright spots shining across the shadowy tunnel of our memories; helping us keep our images about the place aglow and our desire to see more and more places alive.

After about an hour, we are on the road to Bang Saen, i.e. we are cruising across road signs which clearly read Bang Saen, in English small fonts and Thai big fonts.

We reach Bang Saen before sunset, settle ourselves at the guest house and finally exclaim – WOW, Thailand!

Next post covers the beach destination of Bang Saen.