Khardung La is on the TOP OF THE WORLD! Doesn’t that sound exciting? How about a drive over that! And how would it feel to stop there for a while, take pictures with the signage that claims it to be on the top of the world and then entering into the Nubra Valley! Adventurous, isn’t it?

At the Top of The World!

Khardung La is the highest motorable road in the world at an elevation of 18380 feet. It is the gateway to Nubra Valley and Siachen and is in the Karakoram mountain range.

The much awaited journey of us to ‘Khardung La’ started early in the morning of 15th July 2014. It was a pleasant drive for first few kilometers (around 20-25 KM), then started the rocky mountain roads. A blue signage on the barren mountain road attracted our attention. We stopped the car. 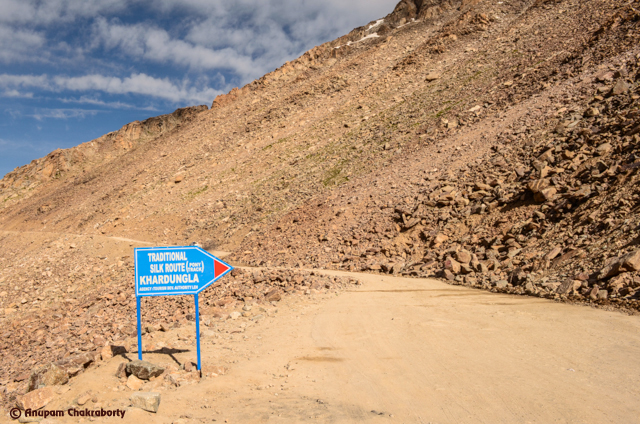 The signage was put by the Tourism Development Authority, Leh to indicate that this was the pony track of the traditional silk route (a trade route) between Punjab and towns of Central Asia in the 17th century. I looked around but nothing remains of the past caravan route. The blue signage of tourism authority is the instant source of information for the travelers on this road. Thus we witnessed the track of glorious past. 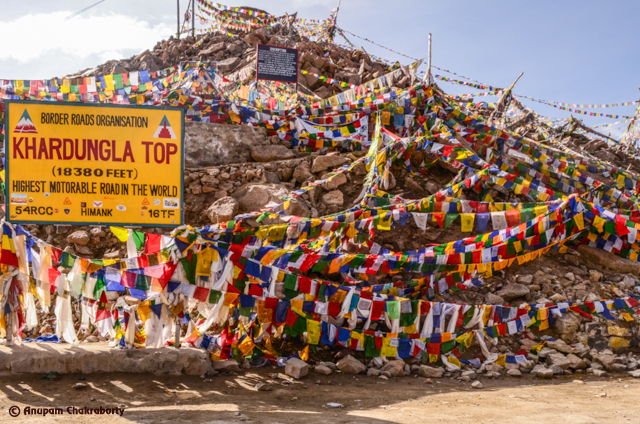 To be on the top of the world you are really expected to experience lesser oxygen. So do not stay longer on the top and don’t overstress the body.   After reaching at Khardung La we followed all these basic rules.  Aahhh! It’s a tremendous feeling, a joy of being on the top and accomplishing it. But it is certainly a place where everyone can go and experience the same. All other tales of difficulties about Khardung La that buzz around are nothing but hype! 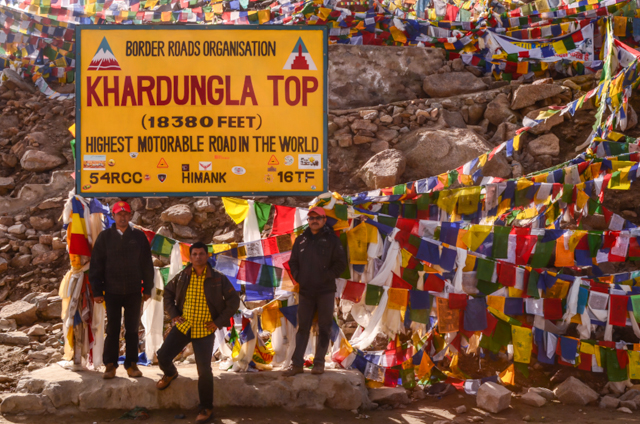 We too with the Khardung La Top Signage!

Like many other high altitude passes, the army has its presence at Khardung La too and here they have a small souvenir shop where hot tea are served to the travelers. There also locates a temple. It’s obvious. God can’t leave us alone at that height!

Standing on the top of the world, if you ask, is this the limit? You will be replied soon. A signage will tell you SKY IS THE LIMIT. 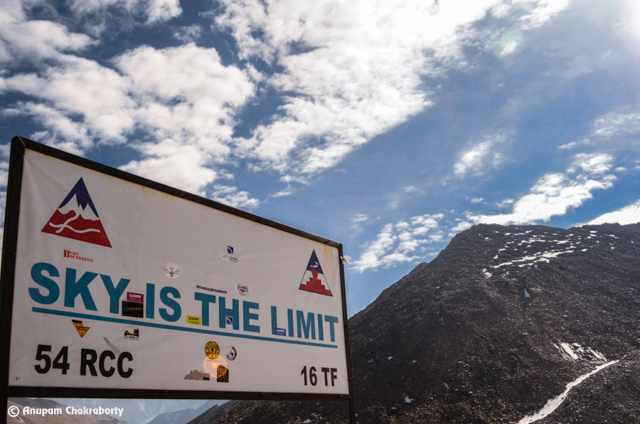 We were told that weather is very unpredictable and highly unstable and can change surprisingly fast at Khardung La.  It may leave travelers trapped for hours or even days, but nothing like that happened to us, except heavy downpour on our way back on the following day.

We started descending from Khardung La. By now ‘Rahman’, the driver of our car became familiar with me. As I pointed the camera, he stopped the car. I came out to click. A small lake surrounded by the mountains just below the Khardung La looked so beautiful.

A Lake below the Khardung La Top

We set off again. Soon we passed the village Khardung. It is a tiny green village surrounded by barren mountains.  A drive of another 40 minutes or so and we met the river Shyok, a tributary of river Indus. The water of river Shyok looked muddy. Our journey continued by the bank of river Shyok. 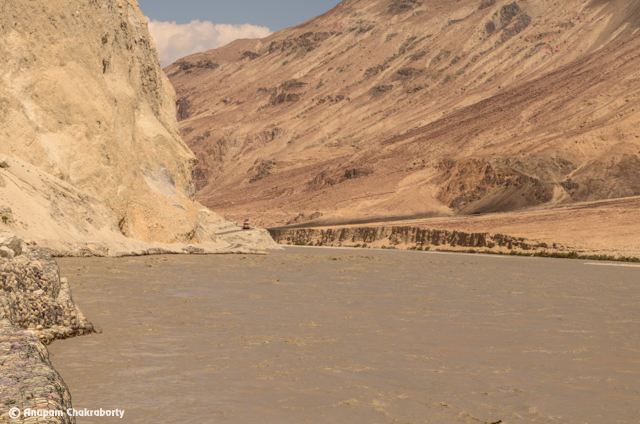 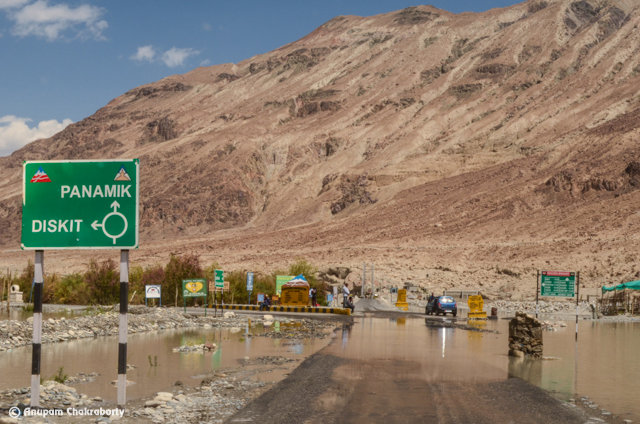 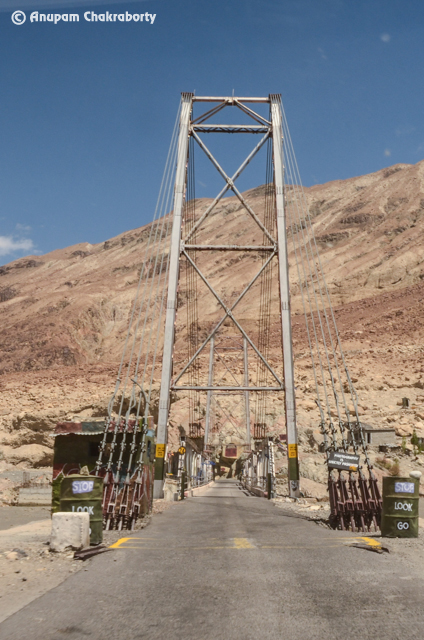 A bridge on the river Shyok

Panamik village of Nubra Valley is known for its hot spring water. The path not very well marked and not many travelers visit there, our driver was little confused about the track. However, with the help of locals we arrived at the hot spring.

The hot spring of Panamik though not spectacular, but like all other wonders of Ladakh, this little hot spring also situates at an elevation over 10000 feet. The hot springs from Barren Mountain are channelized through two canals and collected in a reservoir which is enclosed as bathing area. Hot spring contains sulfur and high concentration of various minerals. Sulfur has been used medicinally since ancient time and therefore bathing in the water of hot spring are considered to be therapeutic. 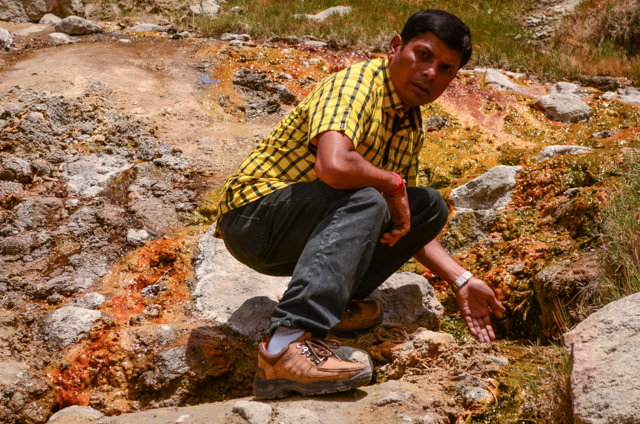 Hot Spring on the barren mountain 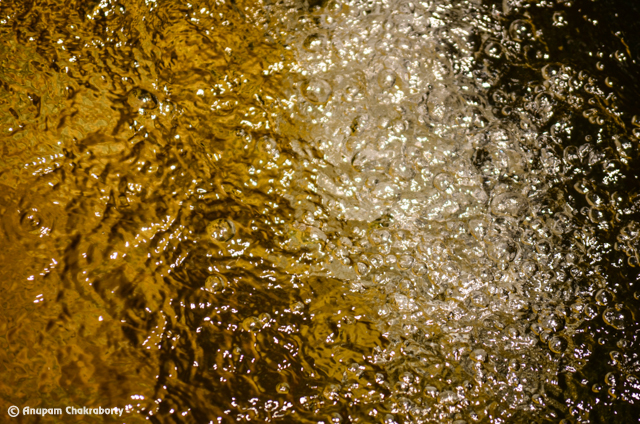 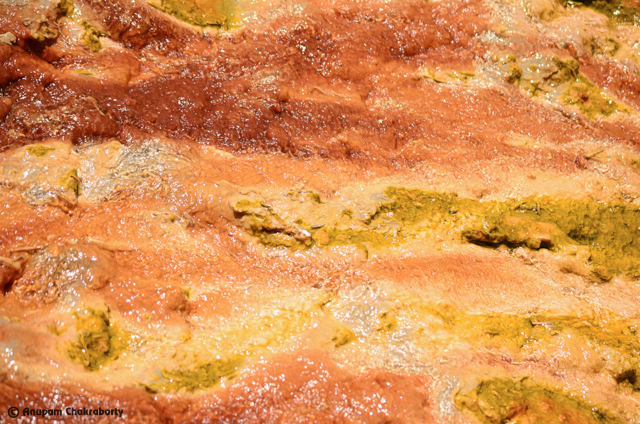 Sedimentation of Minerals from Hot spring

Our next visit in Nubra valley was Sumur village. The main attraction of this village is Samstanling Monastery. It is a 150 years old monastery though not looked so.  Wide red steps led us from entry gate to the front space of the monastery. I stepped inside the inner sanctum and immediately felt its antiquity. 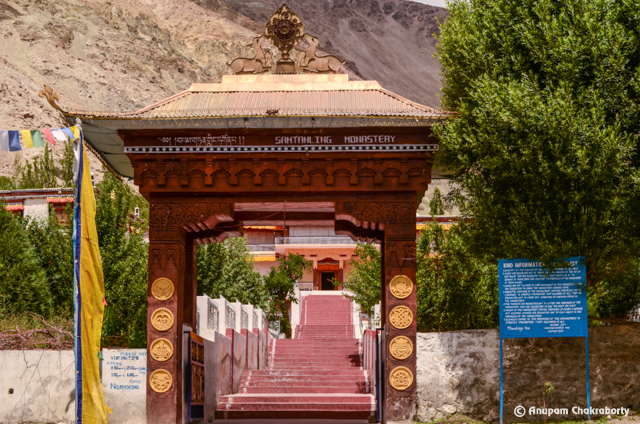 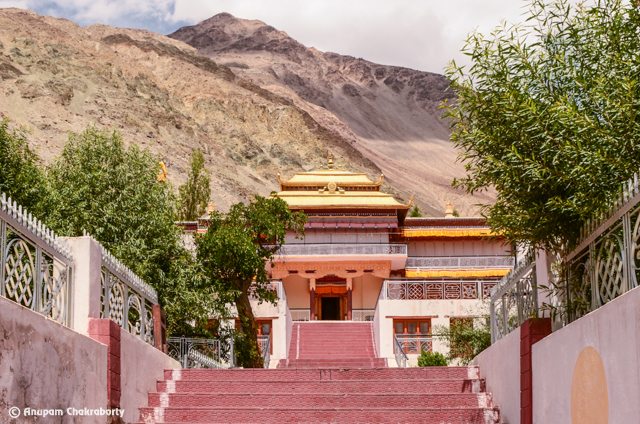 Wide red steps to the Monastery 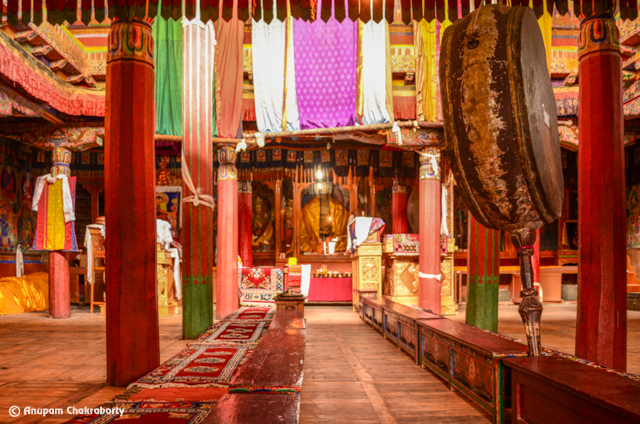 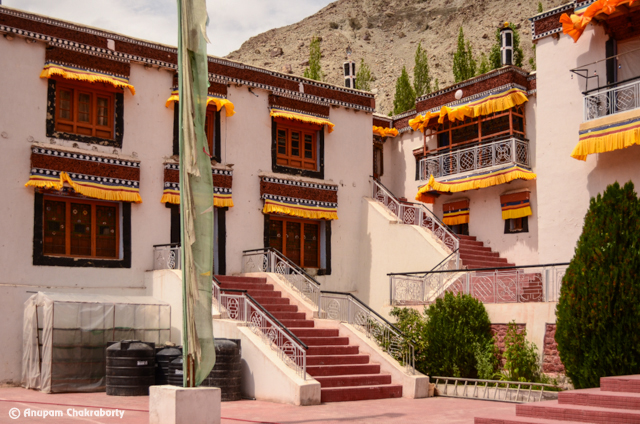 Lamas’ Room in the Monastery

It was about 2 pm when we completed the visit of Samstanling Monastery. We planned our night stay at Diskit, a popular village of Nubra valley among the tourist. It was not too far and we headed towards it.

I will come back soon with a post on Sand Dunes of Hunder and Diskit Monastery in Nubra Valley. Till then-

This was my first trip to a small place in Uttarakhad. Just wanted to be away from the everyday city life and be in…