So this is my first post on any travel blog..! Let’s just hope that it gets a good start.

During recent times, travelling has become an addiction to me. Being a slave in the private sector and living a life in the hustle bustle of a metro city, it becomes quite necessary to rejuvenate yourself after every 2-3 months. So this time we zeroed in on one of the nearest destinations for River Rafting “Rishikesh”. Rishikesh is a town in the Dehradun District of Uttarakhand & is surrounded by the Shivalik range. It is 35 km far from Haridwar, 90 Km from Mussoorie, 25 Km far from Jollygrant airport Dehradun, and 240 km far from New Delhi making it well connected for people like us. So the five of us zoomed out of Delhi by a cab on a Saturday morning by 6 am. It is recommended to leave Delhi early morning, else you get stuck in the traffic which will be tiresome. After crossing Meerut, we halted for breakfast as everyone was feeling ravenously hungry. Believe me, nothing meets the taste of Parathas & chai at the roadside dhabas during such trips. We filled our belly and then the journey resumed. 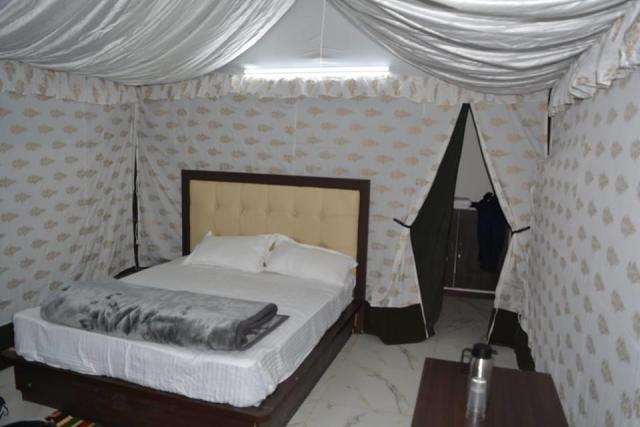 Finally, by 3 pm, we reached our destination. We had booked our stay at Gurugram Resort in Ghattu Ghat, which is approx.. 15-20 km from Rishikesh and believe me it was the best decision. The resort had the best view, at the bank of the river and the company of cool river breeze. It included a swimming pool, activities like badminton, cricket, Double Rope Bridge etc. and a lot of Flora for people who get satisfied by natural beauty. The rooms were not only beautiful from the inside just like the tents but also had all the amenities. After getting freshened up, we had lunch at the Resort and headed for local sightseeing and started with Laxman Jhula.

Us at Laxman Jhula

It is a big iron suspension bridge on the river Ganges. It is believed that Lakshman (Brother of Lord Ram) crossed the river here through jute rope and was later rebuild when the old one was damaged by the floods. It is popular amongst tourists for shopping and rafting. Both sides of the bridge have many different shops with interesting things to buy. It is for pedestrians but the bikers make an uncoordinated hotchpotch. Even the bulls were roaming on the bridge and at a point one of them kind of attacked a person and created panic amongst the visitors. From the bridge you can have a spectacular view of the river, one can easily see fishes swimming in the crystal clear water. Tera Manzil Temple is also situated here, which has a majestic view from the Jhula.

We came back to the resort by the evening and enjoyed the evening tea at the river bank. To add more beauty to the weather, there was a sudden rainfall, which made the environment even more pleasant.

Happiness held is a seed, happiness shared is a flower 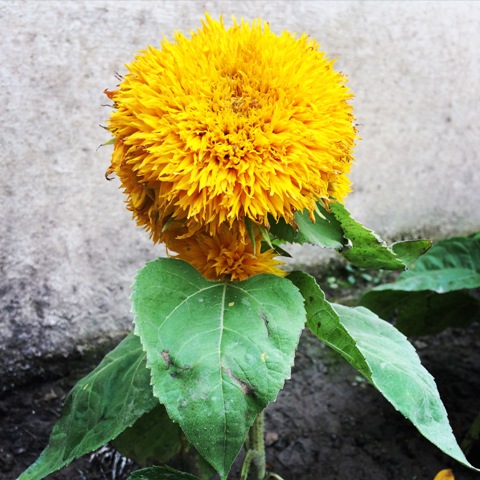 A Flower does not love you or hate you, it just exists 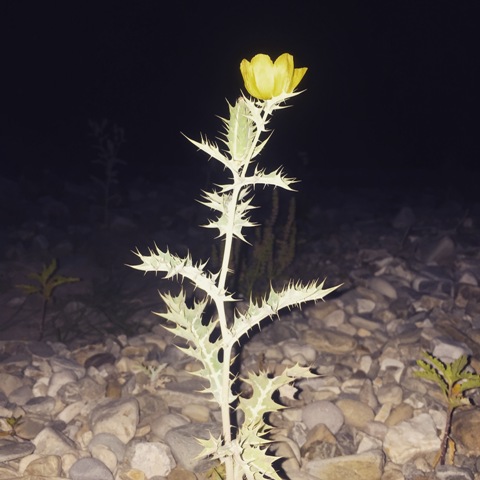 The next day was the Rafting Day. We got up early in the morning, had the yummiest breakfast and waited for our turn for Rafting as we had booked it earlier itself from the resort. We wanted to do Bungee Jumping also, but for that, one need to pre-book it at least 10-15 days prior the visit. So we ended up only doing the River Rafting, which was also very thrilling and exciting as it was my first time. However, two of our friends had done it earlier also. So we left the resort by 2 pm and headed to Shivpuri from where the River Rafting gets started. Being a long weekend, a lot of people were visiting the place making it a bit crowded. Also, it was taking time for our turn, so in the meantime, we decided to have some lunch. We visited the Oasis Restaurant to have a meal. The food there was very delicious with the perfect blend of tanginess and spices. After having lunch, we finally headed to Shivpuri to start the Rafting. It’s half an hour drive from Rishikesh to Shivpuri. We reached the starting point and the guide gave us instructions regarding the safety measures. It is very necessary to follow the instructions as this is for every body’s safety.

I have never seen a river that I could not love. Moving water…has a fascinating vitality. It has power and grace and associations. 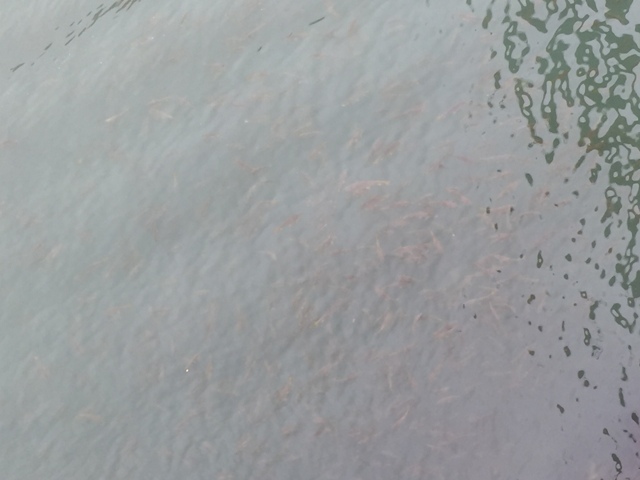 And finally, the adventure started. Rafting was nothing like I had imagined, it was so intrepid and astonishing but very exhausting. As it was an evening shift, the weather became more clement. During the initial rapids, I was very dreadful as I was sitting in the front. But as the rapids passed by we became more dauntless and enjoyed every one of them. After some rapids, the guide allowed us to swim in the water, which was an experience in itself. Though I was very frightful but still gathered the courage to let myself flow in the water. After completing the majority of rafting, we halted for some time for a quick break and had tea and Maggie at the time. We were all feeling very cold as all were swimming in the water which was quite cold. The tea and Maggie at that time were giving a divine feeling to all of us. It took almost 2:30-3 hrs for Rafting to complete. The guide dropped us at Laxman Jhula and from there we headed back to our travel agents office, where we changed and spent some time at a café, named Krishna Café to relax as everyone was very tired after the rafting. The ambience of the restaurant was quite amazing though the food was a bit costly. We ordered dal fritters which were appetizing. We had also planned to see the Ganga Aarti after rafting but as we got late, we missed it, which everybody repented.

Finally, we headed back to our cab. During the return, we stopped by at Har ki Paudi as we wanted to carry along the holy Ganga Jal to our homes. Even at the night, the place was full of people, having faith in the holy river. They were either taking baths or filling the bottles with the sacred water. After spending half an hour back we recommenced the journey back to our busy lives and reached Delhi early morning. 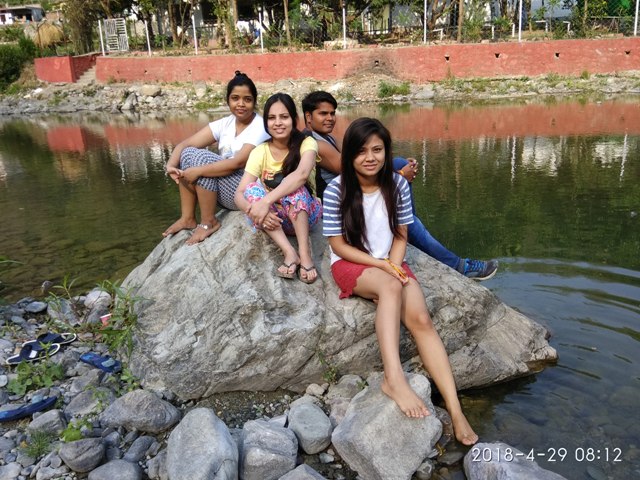 Riverbank at Back of resort 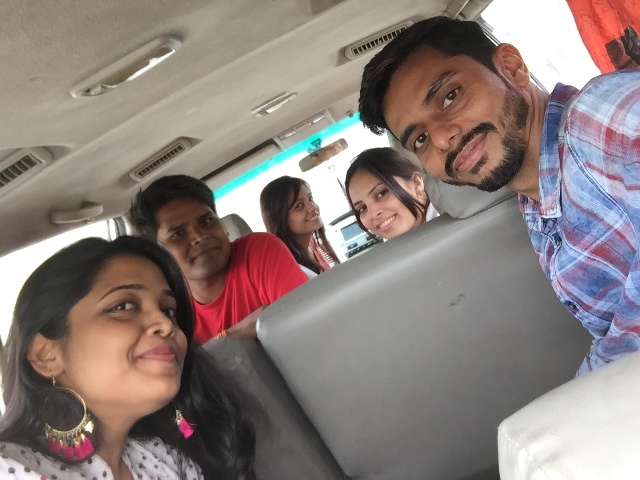 Journey matters, not the arrival

A few more photo-stops and we realized that by the time we would reach up, it would be well above three hours. The hike was relentlessly steep but we had no way out now. To aggravate the difficulty, path was paved with rough stones and we had to look where we put our feet.