During numerous sojourns to the Himalayas, we often dream of a stay in ‘real’ mountainous solitude – perhaps a cottage, an independent abode entirely to ourselves, ‘far from the madding crowd’. Since this holiday cottage was made of what we had always dreamt of, I devote this section to our stay there. The owner has assured that tourists willing to stay there can always check on its availability. 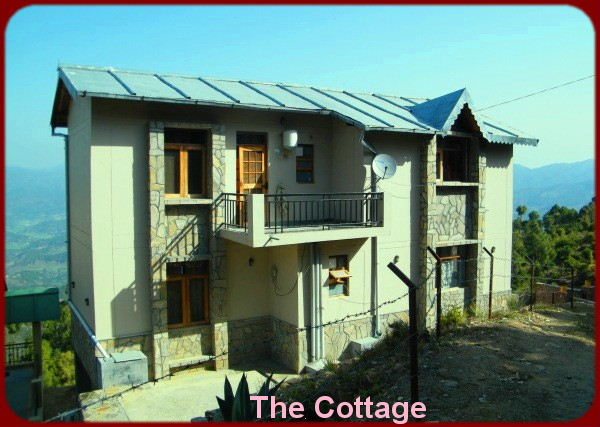 Perched majestically on slopes of a ridge, this Tudor style cottage overlooks ravines filled with pines. Look further and you have the Himalayan ranges, with Dunagiri at the foreground to snow clad peaks of Kamet, Nanda Devi, Trishul. Snow peaks were visible on two of the three days we stayed there. 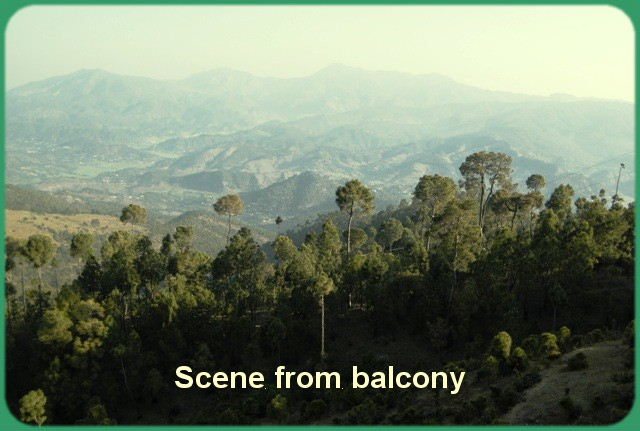 The fully loaded, newly built cottage comes with a large drawing room (elegant upholstery, wooden flooring and a fireplace that actually works), equally large open kitchen with all and sundry utilities including a microwave, coffee maker, gas stove, full set of cutlery, potable water arrangements and complete set of utensils to indulge in unencumbered culinary adventurism. That is, in fact, what Sharmi and her father did (both being cooking freaks as against me being ‘God-help-me-from-entering-kitchen’ freak). 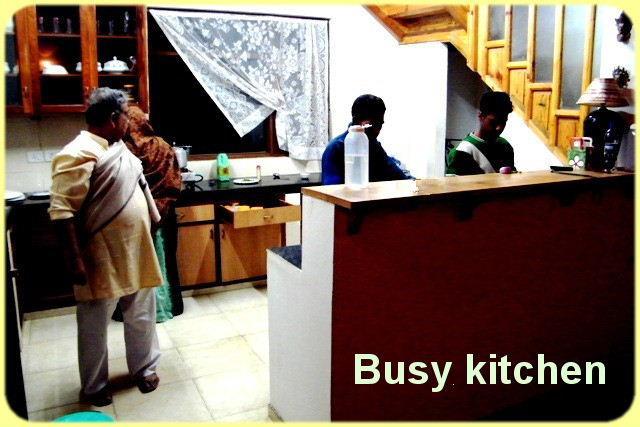 The expansive, well outfitted drawing room extends into a cosy bedroom with a styled bathroom on one side and a generous balcony on outer side. A set of wooden stairs leads to the hanging wooden gallery overlooking the drawing room. The gallery houses a TV (with a range of Tatasky channels), which I consider superfluous (not my daughter though), a modest library (which has coffee table books, maps on local area/Uttarakhand, Jim Corbett’s Kumaon collections, informational stuff on local flora & fauna, etc. apart from travel magazines) and a comfy seating space. The gallery leads into another bedroom on first floor with its own bathroom. All the rooms have large front and rear balconies, glass doors and a tasteful bedding/ upholstery. Bathroom have modern amenities including 24/7 water and geyser. This being a private house meant for personal use, there is an unmistakable homely flavour all around. 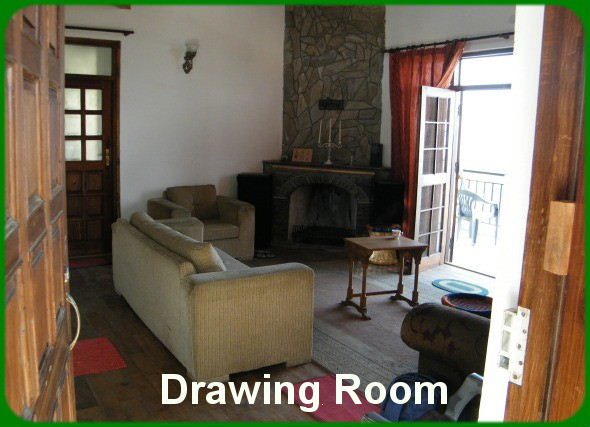 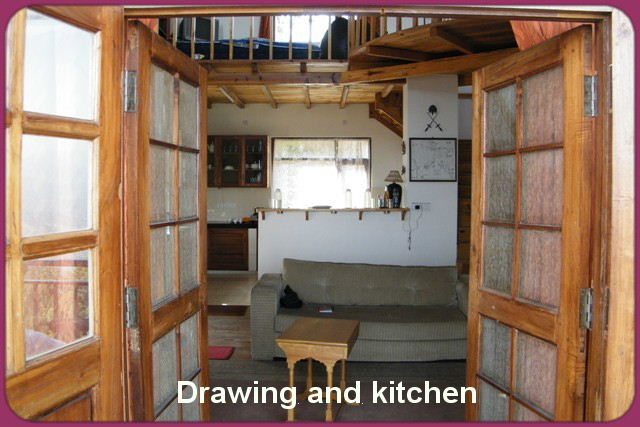 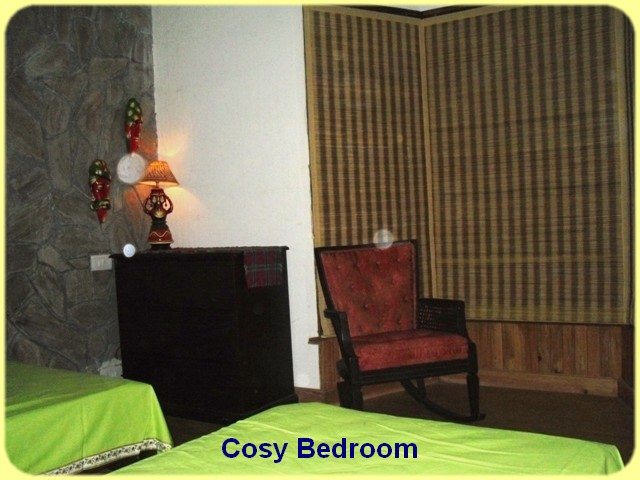 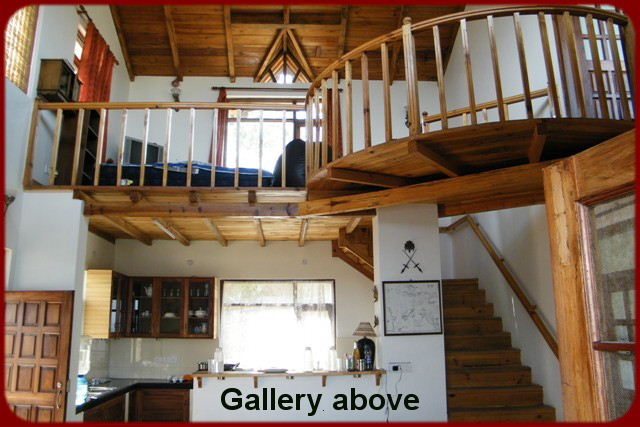 The caretaker also needs a mention here; an affable local guy in his twenties (name..hello..missed), who is available almost round the clock to guide us through the motions. He can get grocery from the nearby market, provide information about the local area, does cleaning of utensils and willingly prepares tea/coffee/other regular stuff if one wants so. He took me down to a village some 2 kms along the trail, quite happily.

The Majkhali market is about 5-minute walk away and stuff needed for regular cooking can be easily sourced from there.

One touching aspect of our stay was provision of a transistor (remember? – the good old source of our collective joy – sadly on its way to extinction because instead of carrying them fondly on their shoulders, pahadi folks now-a-days are seen more often with mobile phones stuck to a side of their heads, while trailing through the curves of Himalayas) !!! Imagine, us sitting on the balcony after dinner, lights switched off, eyes catching up on visions of star-filled sky; and this All India Radio powered transistor churning out yore days melodies;

I am tempted to translate it thus –

When the moon ceases to exist,
Stars having perished long by,
My heart would still go on –
Beating for you……

Another heartening presence was that of a Carrom-Board (my daughter reminded me of this)!! She and her grandfather were aggressively engaged with the board for a major portion of time we spent in the house. 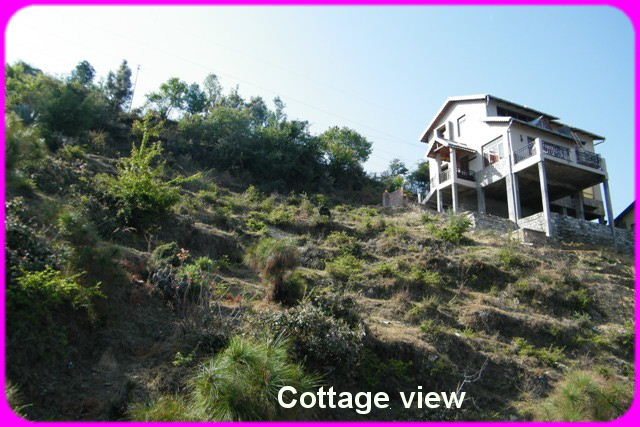 Contact.
The Delhi based owner can be contacted at his email himalayananchor@gmail.com. The tariff structure is Rs 2000/- for a day, Rs 5000/- for 3 days and Rs 7000/- for 5 days, for the entire cottage. Tea/coffee/LPG/uses of utensils/bedding etc. are included in the tariff. Exclusions are shopping expenses for grocery/ vegetables during the stay. Ghumakkars may ascertain details directly from the owner before settling for the deal.

The fare structure (my opinion) is kept that way to encourage people to stay longer ☺.

One should keep in mind another point that the cottage is located about 100 mtrs away from the parking. The kachcha (unmetalled) path after parking point goes down half the way, after which it moves up till the cottage. Elderly people thus may have a little difficulty in accessing the place. For the record, however, Sharmi’s father, in late sixties and never much of an outdoor man, was with us in this trip and he managed movements on this patch on his own without much difficulty.

For self driven vehicles, one should directly reach Majhkhali, Ranikhet, get in touch with the caretaker and he takes care thereafter.

For bus/train travellers, Kathgodam is the nearest train station. From there you have frequent share taxies to Ranikhet, which take 2.30 hrs and charge around Rs 75/- per head. From Ranikhet, local vehicles are available for Majhkhali.

So go ahead, indulge in this exclusive ‘cottage stay’ and enjoy Himalayas from a different perspective.

On to next part on Ranikhet (Part III)…….

On a fine winter morning, we planned for a trip to the beautiful terracotta village of Ilambazar located amidst green forests along the highways. Ilambazar…