During those recession times, just two days before Obama taking oath as 44th president of USA, I landed into USA in Bellevue, Washington state near Seattle. On very first weekend break, a close friend (Samrat) planned a trip down south in Oregon state to visit waterfalls in Columbia River Gorge. The Gorge is one of the many natural beauty sites which have been declared as National Scenic Area by US govt. I had no involvement in planning of this trip as I hardly researched anything this time before coming. Samrat being his enthusiastic self and shouldering responsibility of taking entourage of 16 folks including his and two other families hired one of the biggest personal passenger vehicle in US, a Ford 16 seater. 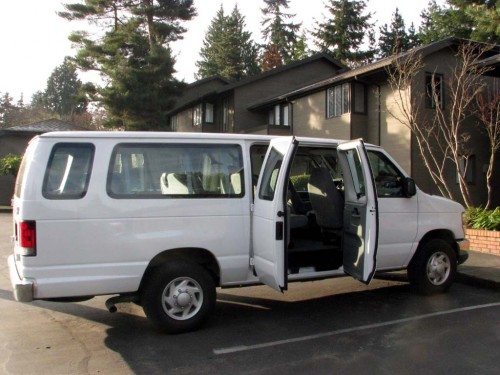 It was test of his cheerfulness as he drove 200 miles without anyone’s help (he being the only driver) and simultaneously cheering up rest of the crowd. Portland is around 150 miles from Bellevue/Seattle. The weather turned out to be not the way we expected. While it was sunny in near Bellevue but it turned cloudy and started snowing as soon as we crossed Columbia river into the state of Oregon. The road I-5 was fabulous and I enjoyed looking at country side. Other than its natural beauty and liberal city of Portland, Oregon is also know as state with no Sales tax on commodities. This fact was on every one’s mind and even on a recreation trip, we shopped at soon to close Circuit City chain. But before that we first went to see what we came here for, the waterfalls. The mountain ridge along Columbia River highway is home to many scenic vistas and waterfalls. There would have had many waterfall streams otherwise had it not been chilly winters. This was the first time I saw frozen waterfalls, white patches on otherwise rocky green slopes. Still there was water on the bigger ones. One of them, the biggest, is known as Multnomah waterfall which is the second largest drop in height of water after famous Niagra. The waterfall is in two stages.

Even in the bone chilling weather, the waterfall felt beautiful. There was frozen water on the mountain face but a huge stream of water still dropping from height. 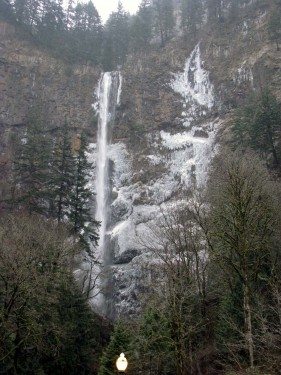 Multnomah from a distance with frozen water around 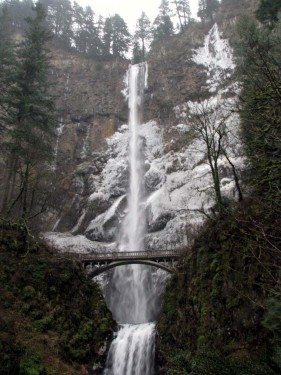 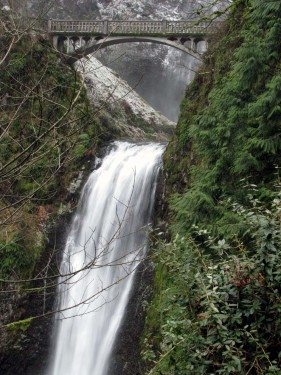 We went up to the bridge only as it started snowing and wind due to fall was extremely chilly. Even though path beyond the bridge was daunting still a few brave souls were seen.

I wish we had come in summers when we could have walked up to the top of the fall. This area is famous for many hiking trails which are best explored during summers. Before Multnomah, we went to one more fall called Bridal Veil. This one was tucked inside foliage and one has to take a forest trail from parking however one can hear its roar. 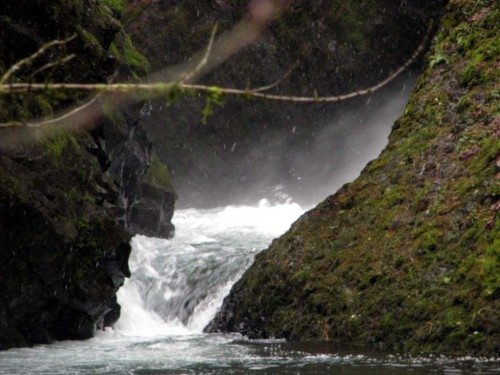 There was no one on the trek till we were there. Proabably this is not the time people venture out to see waterfalls! Once there, the drop of the fall was not much but flow was powerful. 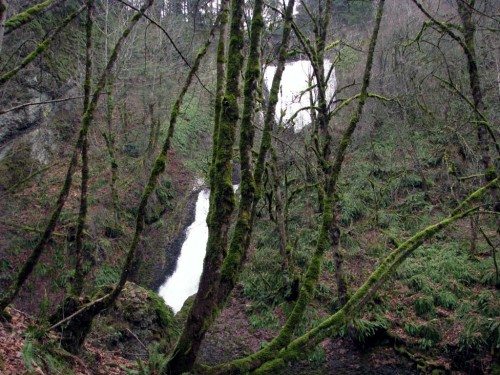 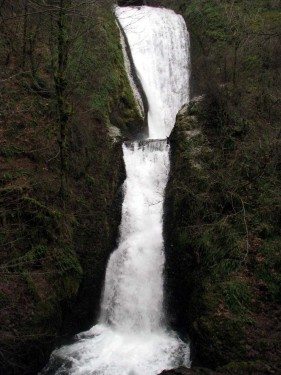 This one did not have ice around it and water was pure white as milk. By the time we were done with these, everyone had enough of chilly weather. So, we headed back to our hotel, Holiday Inn, which we had booked for us in Gresham, adjacent area to Portland. It snowed a little bit overnight and our plans of going to Mt. Hood were screwed. The reason for that was that in snow, vehicles are supposed to put chains on tires so that they don’t skid. We with rented vehicle did not opt for this. So, soon plan was made to visit the Portland city and have a brunch at an Indian restaurant called “Swagat”. The restaurant as if to our convenience starts lunch buffet at 11:30 AM. As we reached there, we were one of the first customers of the day. A bunch of 16 desis getting down from a vehicle which barely fit them would have been quite a sight for the people around. Nevertheless, we had a sumptuous lunch at the buffet though it was only palatable. Portland has lot of India community due to presence of Intel. We were done by 1 PM and we had to start heading back, so we were left with only 2 hours. After lot of deliberations, we decided to park at riverfront of Hood river and everybody goes his way and comes back in time. I chose to stick to riverfront promenade cum park. The confluence of Hood & Columbia river is near by. Portland is also known for Mt. Hood which is visible from most part of the city on a clear day alas which was not today. This was Sunday morning and a few Portland residents were out there jogging or just bathing in the precious sunlight though it was cold enough. 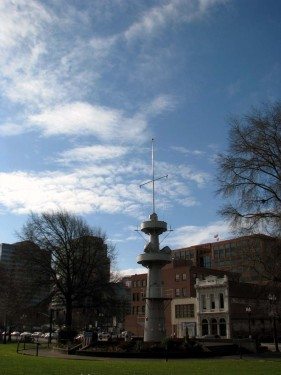 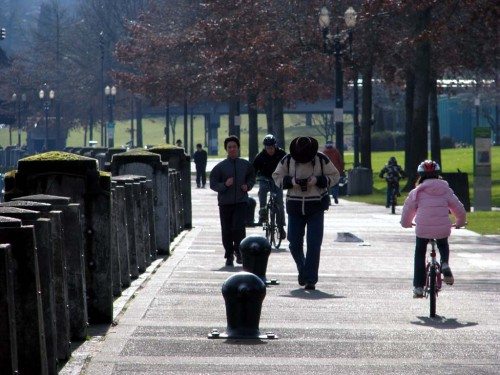 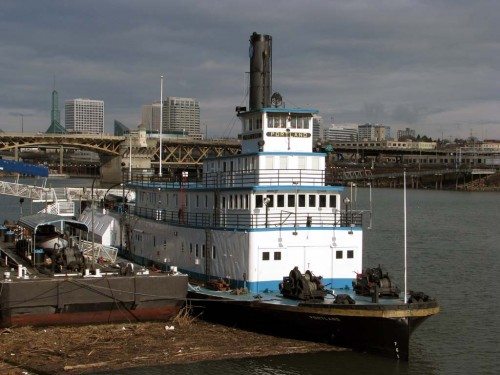 The city though did not seem so busy had a tramway of its own which ran on vehicular roads though I did not try to step into it. The streets seemed quite walkable and not intimidating.

After some time we headed back to Bellevue. The journey was quick given to beautiful road and day light still remaining. We reached by dusk. All in all it was an enjoyable trip.

Our driver suggested us to stop at a point where you can enjoy Elephant Ride. We were first not in a mood but considering our little daughter will have some fun, we decided to stop by. Then we had to think again about taking a ride as they charge quite much for a 15 min ride. 350 rs per person was not a fair deal but innocent and disappointed looks on daughter’s face persusded us to go for it. I was afraid of the ride at first but once the elephant started moving it was very enjoyable. The ride takes you back to childhood age and you want to scream loud in happiness and glory of sitting on an elephant. The only thing that disappointed us was the condition of elephants and the rude way in which they were being treated.  I had a pity on poor animals.