Farmers’ markets are a phenomenon in California. The goods on sale are very similar to the day shifting bazaars (a.k.a Som Bazaar, Mangal Bazaar, Budh bazaar and so on) in India. Freshest of the fresh vegetables, fruits, and even flowers can be bought from these markets. One such market was outside the Ferry Building, near Embarcadero, at San Francisco on a weekend in early May this year.

It was in one such Farmer’s markets where I relished the juiciest strawberries and stood in awe of the biggest orchids that I could ever have imagined. A friend once stated “U.S. mein sab bada hi bada hota hai.”

The setting was very familiar. People squeezing vegetables and fruits to test whether they are ripe enough, some even tasting them. Reminded me so much of the way we open one or two pea pods and consume the peas inside to decide whether they are good and then according to our judgement instruct the sabzi-wallah “Bhaiya, do kilo de do.” or “Yeh to kitne chhote chhote hain aur itna mehenga laga rahe ho.”. It was like home away from home. And, yes, California also boasts of a huge Indian population so there were many Indians around. As this was my first trip to the US, I roamed around like a wide-eyed child, curious and excited about everything.

Anyways, coming back to the Ferry Building, the structure that exists today opened in 1898 and has withstood, with surprizingly little damage, the devastating earthquakes of 1906 and 1989. The building was once the second busiest transit terminals in the world next only to the Charing Cross station in London. The traffic reduced after the Bay Bridge and the Golden Gate Bridge opened in 1930s and went down further after the new train service started from the Transbay Terminal to the East Bay.

The inside of the Ferry Building is now famous for upscale gourmet marketplace. There was an interesting display of various types of mushrooms, chocolates, and spices. I never knew there were so many different types of edible mushrooms as had only seen the cute, white ones back home. I got an pack of truffle salt from there. Haven’t used it yet. 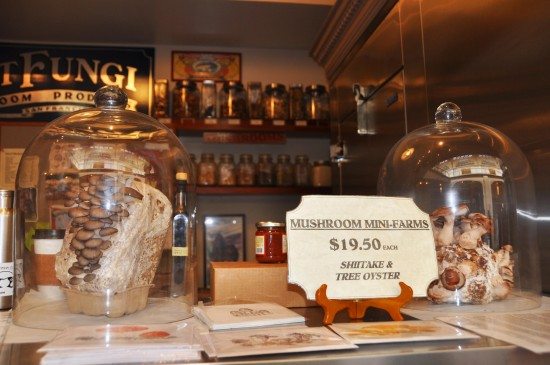 There were lobsters and other seafood for sale. It is here where I tasted my first oyster. While my colleague obviously found the flavour exquisite and asked for one more, one oyster was one-too-many for me for a lifetime. If I have hurt the feelings of anyone’s taste-buds, please forgive me. But that slimy, salty, raw, white, shapeless organism is not for me. I had to drown the taste with an “Indian Chai Latte” available in another shop.

Other interesting shops within the Ferry Building were named “Boccalone – Tasty Salted Pig Parts” and “The Blue Bottle Cafe”.

After spending more than an hour amidst the various impossibilities, we strolled out only to come across more. And there, right on the pavement, sat a toilet seat. There was a fair amount of activity going on around it. It was perhaps a group of artists shooting a satirical video. It can be that or I don’t know what. When i pointed my camera towards the group, they graciously parted to expose their star, the toilet seat, better. Click. 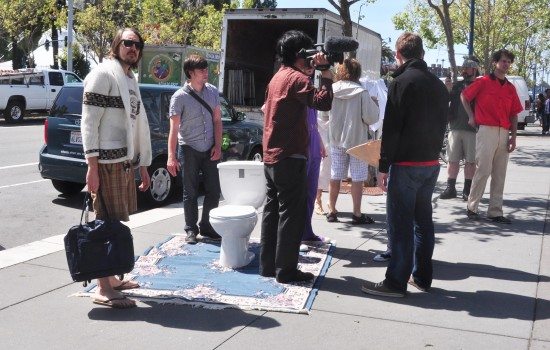 Right across the road, stood another one of the unimaginables, a broken down fountain or so it seemed. On closer inspection, it was a crazy mesh of huge rectangular tubes criss-crossing each other, with water flowing out of the end of each tube. Apparently, this is called the Vaillancourt fountain created by Quebec-born sculptor Armand Vaillancourt. 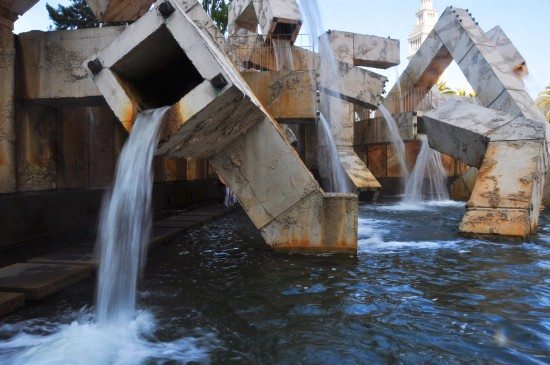 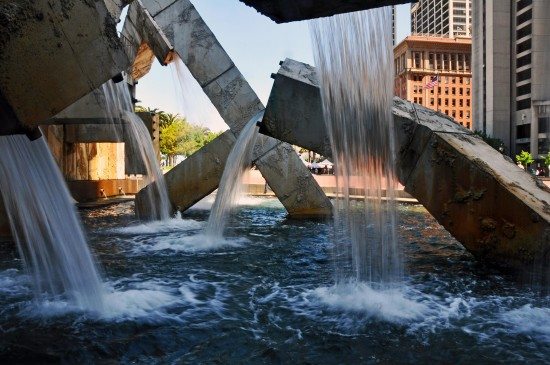 On the whole, the place was nothing less than bizarre. A paradox.

Probably by now, I must have you wondering about the title of the post. Comprehension will dawn when I tell you who I ran into while strolling through the farmer’s market in right in front of the Ferry Building, California. Who else but the Mahatma himself. Our beloved Gandhiji – very much at home anywhere, even here at one of the strangest places I have ever seen. 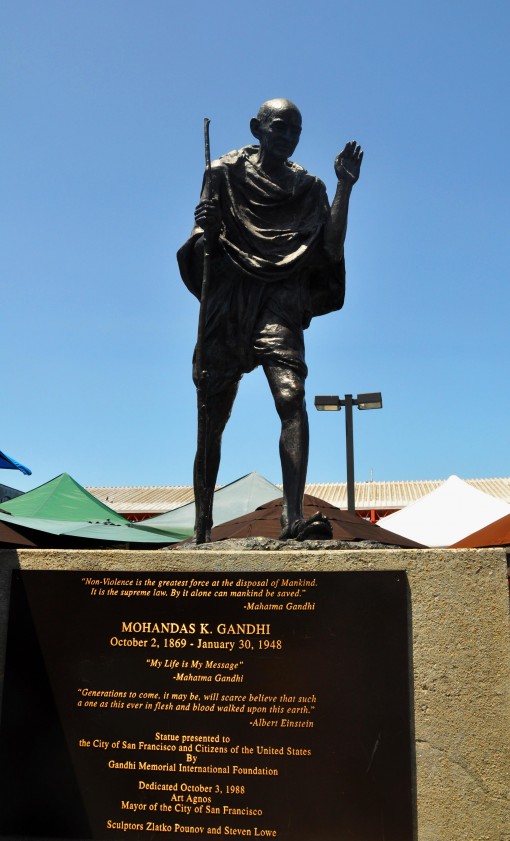 Gandhiji’s words “Non-violence is the greatest force at the disposal of mankind. It is the supreme law. By it alone can mankind be saved.” were inscribed beneath the beautiful sculpture. Accompanied by Albert Einstein’s “Generations to come, it may be, will scarce believe that such a one as this ever in flesh and blood walked upon this earth.”

Paradox, as I was saying, stood right there in front of my eyes. A very self-occupied, bindaas person sat playing a guitar on the steps of the well-maintained, neat and clean, shining statue of the man who lived a simple life, bindaas in his own way. It was a moment of pride for the history of our nation, the long-drawn struggle for freedom, and a feeling of possessiveness as well :-). “He is our Gandhiji.” 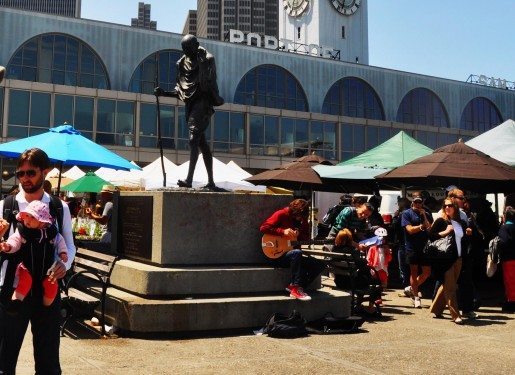 Probably, recalling what we little know of this enigma of a man (for most of us, only through history books or visits to the museums) may be one of the good ways of wishing each other a “Happy Independence Day”.

How I ran into India at the Ferry Building, San Francisco was last modified: February 22nd, 2020 by Vibha

As we moved ahead, we crossed more and more nallahs. To our surprise they were even more dangerous now. The water flow was huge, it was so violent, we thought as if we were going to flow away with the water down to the Spiti river.