After being awed and intimidated by majestic Himalayas’ expanse and beauty for years, there came a time for me to think again. Can anything really match the lovely green valleys of Himalaya with running brooks and waterfalls and rivers and perfect cool weather? Yes there is ! And nowhere else but just right in my backyard, the Sahyadris, are the most picturesque and the most beautiful place to be in the pouring rains of monsoon. 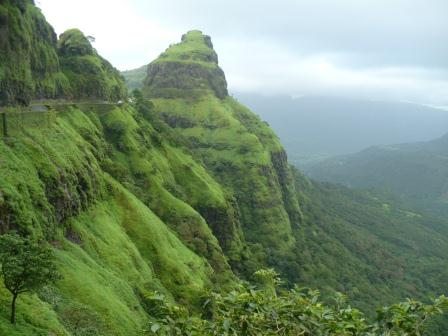 Sahyadri are part of western ghats, the mountain range that traverses from north to south on the west coast of India. In Maharashtra it separates sea level Konkan from the Deccan plateau called ‘Desh’ Though by and large the range follows to south, there are some off shoots which run east-west. It will not be wrong if one says that Sahyadri has given a distinct character to the cities and towns of Maharashtra. Almost all the towns on the plateau falling in the outstretched branches of Sahyadri have their very own hill or a plain or a river. Several ‘Gad’ – ‘Killa’ – fortified top of a hill strategically placed, dot this landscape of hills and valleys.

It is here the entire Shivaji Maharaj world comes alive from the pages of history. And it is here the ancient chaitya-vihar complex find their place in history. Sahyadri, a lava based mountain range is renowned for its stable composition owing it’s hardness and strength to the layers of cooled lava forming Deccan trap, a solid basalt rock. 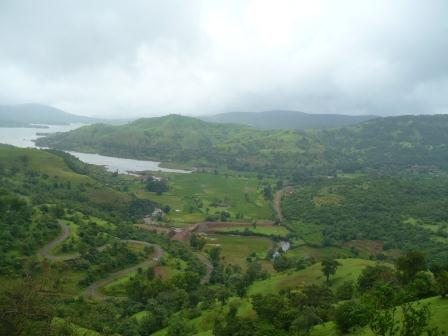 Normally it is merely a chain of mountains and valleys, with tunnels and winding roads that must be crossed before we hit the beaches of Konkan or business in Mumbai. Though it is the most loved place for avid trekkers all year round, for a normal tourist it is nothing more than an interesting change from city traffic. The adjoining photo will give an idea of how the terrain looks in dry season. 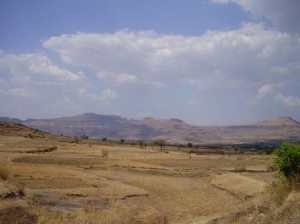 But come monsoon rains and the hills just transform. Gone are the dried grasslands, parched wells, trickle of a river, barren hills and sun soaked dry valleys. Now in their place you have all shades of green only to be interrupted by the black snaky roads and red rooftops of village homes. It was such a soothing site as we traversed on NH4 towards Karad and then turned towards the Sahyadri ranges slowly climbing our way to Amba Ghat. This is one of the ‘ghat’ that leads people from Deccan plateau to reach the sea level Konkan. The famous Pune-Mumbai expressway passes through Borghat, the picturesque Tamhini and Kumbharli ghat leads us to Mahad and Khed in Konkan. Rich in natural beauty, the Amboli ghat bridges Kolhapur to south Konkan. And last but not the least the ‘Naneghat’ was a busy trade route in Satawahan times and before, which would connect Junnar-Nashik area with Kalyan-Sopara in Konkan, the then important cities and ports.

We were headed towards the Chandoli national park. The road was winding and twisting through green dreamland. The sky was heavy with clouds and it rained on and off. The ground was covered in parrot green carpets of grass, dotted with shrubs and trees lush with foliage on the soft rolling hills. A river would appear from somewhere meandering and sometimes the green backwaters of a dam would accompany us for miles. A glimpse of a dancing peacock here and red faced langoor with inquisitive stare there, the journey was a treat to the senses. 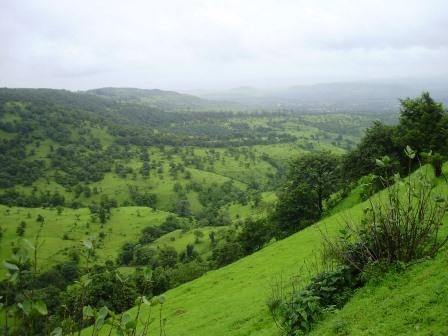 Chandoli itself boasts number of birds and mainly bison. It is no surprise if a tiger or a leopard comes visiting once in a while. The flora is tropical, evergreen with mix of deciduous forest with several banyan, peepal, jambhul (jamun), Aina and Sal trees abound, A short jungle safari in the forest took us on the secluded roads making its ways in the thick, virgin forest. And there it was, a bison family grazing and not paying heed to the couple of tourist cars stopping to gaze at them. Indian Bison is big animal , brownish in colour with tan coloured legs. I could not help notice that the bison calf though almost the size of a full grown cow, looked very cute and innocent. These bisons or ‘gaur’ as commonly called, raid the nearby farmlands routinely. But then we were in their country, isn’t it?

The next stop was the mandatory ‘konkan –darshan’ point. We were at the highest point and this perfect spot to view the smaller ridges and underlying Konkan region was a definite plus point of this short tour. It was a cliff top, straight falling in the deep valley below almost 600 meters, the clouds and winds floating and wafting towards the ‘ghat-matha’ , the mountain top, the vista was amazing! The ridges playing hide and seek in the mist, winds blowing and rain pouring down, it was a moment when you want to be one with the nature. 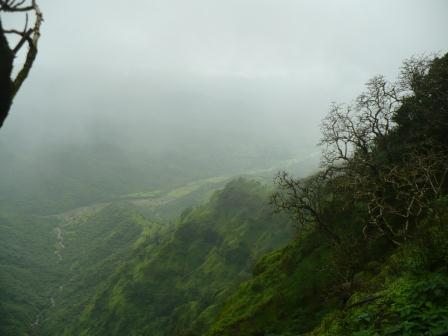 The highlight of the jungle tour was a detour to the famed ‘Paavan-Khind’. This is a pass in the mountain ranges which was battled out by Baji Prabhu Deshpande when Shivaji Maharaj escaped from Mughal clutches around Panhala to reach Vishalgad. A battleground death fighting for our beloved ‘Raja’ has made this place ‘Paavan’ which is sacred. And how sacred and serene it is , Kasari river now flowing through the narrow pass carving its way between straight mountain walls and thick forest all around makes the place even more mystic.

The next day we started our climb down the Amba ghat towards Konkan. The rains had stopped now, sky being gray-blue, with mild sun rays, the striking green of the trees turned a shade brighter. The smooth turns of ghat presented with a picture frame scenery at every bend. The rocks all covered in soft green, young leaves swaying in breeze, the milestones declared something called ‘Marleshwar’. This is one of those several locally ‘world famous’ place of Shiv-Shankar. The legend has it, that a live cobra engulfs the self-formed Shivlinga. This turned out to be a pilgrim site with 200 steps going up in the cliffs and a roaring river running on one side in deep wooded ravine. The temple itself was a cave lit with oil lamps and water dripping from rock roof performing a natural Abhishek on the rock form of Shivlinga and the devotees both. The live cobra was nowhere in sight but outside was a fabulous waterfall which came crashing from height of about 200 feet and dissolved in the river below. 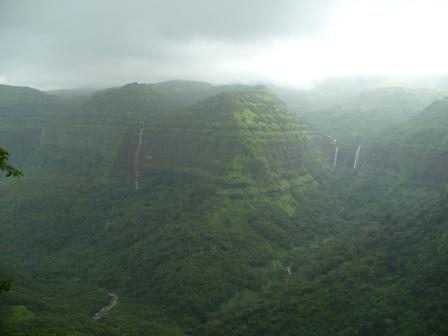 Although these are some of the lesser known destinations on the tourist circuit, their charm definitely enhanced in the monsoons took our collective breath away. Going back to Pune, as the dreamscape faded away in the dark, I gave a mute salute to the Sahyadris for the beauty and expanse and still being ‘ just there’ , always!

A blissful hill hidden amongst the borders of Kerala and Tamil Nadu; small yet serene in its own way felt like a perfect weekend getaway. If you’d like to venture more then you could extend you trip to view the Athirampally falls or even visit the Indira Gandhi wildlife sanctuary at Topslip.